Skip to content
Home » How to Replace a Watch Battery 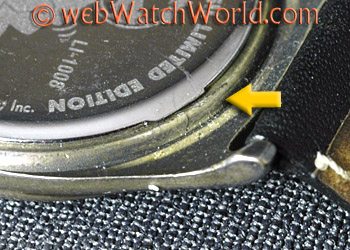 Summary:  With the right tools, anyone with basic mechanical skills can replace a watch battery.  But first, you’ll have to know how to remove and replace the case back, which is the trickiest part of a battery replacement. This article describes one method for removing a snap-on type case back and how to use a watch case back press to replace it. 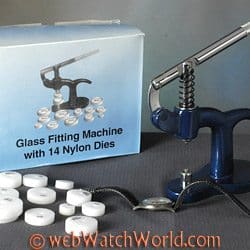 A watch battery usually follows Murphy’s Law; that is, it will need to be replaced at the most inopportune time. I’m also amazed that a little tiny watch battery can cost as much as an entire pack of AA or AAA batteries. A local jeweler nearby will replace a battery for $10.00 and I usually have to leave the watch for two or three days, so I decided I’d rather do it myself.

Do-it-yourself watch battery replacement may seem beyond the capabilities of the casual watch owner, but there’s really no magic to it and, of course, the right tools make it, well, a snap, if you’ll pardon the pun!

And even if your watch doesn’t need a battery or you’re just curious to see what’s under the hood, it’s nice to learn how to remove and replace all types of watch case backs just for fun.

This article describes one of many methods for removing what is called a snap-on case back. There are several different tools that can be used to remove this type of case back and just as many methods. I’m describing the procedure I use for my basic, cheap, daily beater quartz watches — the ones with the flimsy snap-on backs. 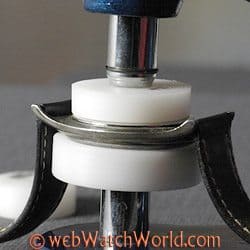 The more expensive the watch, the more sophisticated the case design, more or less. A good dive watch can have anything from a simple screw-on case back that may be threaded and screws right into the watch case, or it may have grooves molded or machined into the case back that require a special tool for removal. I’ll briefly describe the procedures and tools for each of those here but I’ll cover them in more detail in an upcoming review.

Meanwhile, those basic quartz watches with their tiny batteries that always seem to need replacing are the focus of this article. The watch I’m using in the video (below) is an inexpensive quartz Fossil watch, a “Limited Edition” Felix the Cat watch. My wife gave it to me as a birthday gift many years ago because she knows I’ve always been a big Felix fan. I’ll even confess to owning a Felix the Cat plush doll!

Even though the Felix is an inexpensive watch, it means a lot to me and I do wear it occasionally, so I like to keep it running. It takes a little number 364 watch battery made by Renata, a very popular watch battery manufacturer. This Renata battery was made in Switzerland. Renata watch batteries are fairly common around the world and their website also has a nice watch battery cross reference chart.

Removing the Case Back 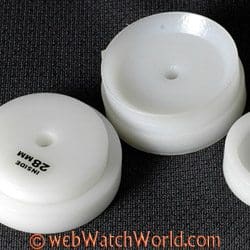 Anyway, to replace Felix’s battery, I first must remove the watch case back. It is a common snap-on, or snap-back case back, made from a stamped piece of sheet metal. Nothing fancy here, just minimal protection for an inexpensive watch.

The snap-on back on the Felix watch has a very tiny tab that can be used as a lever point for the case back removal tool. As you move up the food chain with regards to watch quality (and price), you may find that the manufacturer will add a molded or machined groove in the watch case itself to make the task of removing the case back a little easier.

The tool I’m using in the video is a basic watch case back knife. It looks something like an oyster knife and it has a slightly dull edge that is also hardened to resist breaking. I’ve seen home-made case opening knives and there’s another type that looks like a mini-screwdriver flat blade on the end of a screwdriver handle, and I’ve also seen lever tools that pry the back off.

But the case opener knife is pretty common and in the hands of an experienced user, the back of a watch (snap-on, of course) will pop off faster than you can see, with little or no damage. 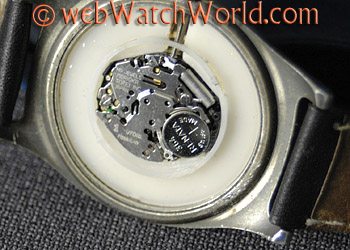 That’s the problem with a knife opener; in the hands of a less-experienced user like me, who only changes a battery once a year or so, it takes a few tries to get it right. But those first few tries usually result in some scratches on the watch case, as you can see in the video. I’ve used old Felix for practice and it shows the scars.

But the flip side is that any watch that has a snap-off back is probably not the best or most expensive watch in the box and that goes double if it’s quartz. I’m not really very fussy with my cheap Timex quartz watches and since the scratches face towards my wrist, who cares?

There’s a definite trick to popping the back off though; some are very easy and some are incredibly difficult. The Felix watch is more difficult to remove than it should be; sometimes you wonder what they think they’re hiding inside to have made the backs so difficult to remove.

The problem with the Felix watch is that not only is there no groove in the watch case itself to help with leverage, the case is thin and narrow and they gave barely any room to wedge the knife edge in the groove.

But, as you can see in the video, I did get it off and once inside, you can see this is a pretty cheap quartz watch. The small movement is surrounded by a plastic molding to take up some of the space and the case back has a very thin O-ring gasket to keep out some of the moisture. Be careful about the gasket or gaskets on your watch; there may be more than one and you’ll want to make sure they’re seated correctly and not twisted. I sometimes add a thin coating of silicone grease to the gaskets also before the back is replaced.

The watch battery is usually held in place by two tiny arms. It’s best to inspect the situation first with a magnifying glass or loupe. I had a heck of a time once getting a battery out of a basic Citizen quartz watch, only because the arm that was holding it in was so tiny I couldn’t see it.

Remember that watches are small and the parts are very fragile, so don’t force anything. It’s best to use a pair of tweezers to try and grab the battery. Also, before you take the battery out, remember which side is up! You can see the + sign on the battery in my photos, which brings up another point. You may want to take some good photos of the procedure and inside the case of your watch as long as you have it open. At least you’ll have some documentation of what it looks like in there and which way the battery goes.

Batteries cost way more than you think if you’re only buying one at a time. If you buy a bunch, you can usually find a bargain, but then you have to worry about keeping the rest of them fresh for x number of years. So I guess it’s best to swallow the cost and figure it’s only 5 bucks or so every two, three or more years. I think Timex has some watches with a claimed 10 year battery life, so the technology must be improving all the time.

Replacing the Case Back 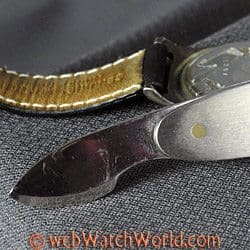 If you’re lucky, you can line up the case back and simply press it to snap it back on. But don’t try the pair of pliers and rag method, or the bench vise method. You’re likely to break the crystal, causing all sorts of problems.

You can find one of these specialized snap-on case back presses for as little as $20.00 or so like this Watch Case Press With Nylon Dies at our affiliate, Amazon.com.

A watch case press usually comes with a variety of dies made from nylon or aluminum. I see no benefit to aluminum and those press kits usually cost more. The nylon is softer and less likely to mar the watch surface I think, as long as you keep it clean. Nylon may pick up bits of metal, so be careful, but as long as you take reasonable care and pack the dies in a plastic bag or box or something for light protection, you should be fine.

Choose the hollowed-out die that is big enough to fit over the crystal without touching it but which has a just big enough diameter to catch on the outside of the watch case around the crystal. 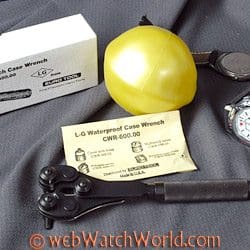 The die that pushes down on the case back is flat; I usually pick one that is just smaller than the outside diameter of the case back, because I find that this flexes the case back just enough to snap into place.

The nylon dies have a hole that fits over a pin in the press jaws, which centers the dies in the tool. Carefully center the watch in between the two and slowly squeeze the press, making sure everything is lined up and centered. It does not take much pressure to snap the back cover on, so if you’re squeezing until your hand is shaking, something’s wrong.

You’ll either hear the back snap on or you will feel it seat. Inspect the case carefully with a magnifying glass or loupe to make sure it’s seated and you’re all done.

Other Watch Case Back Removal Tools 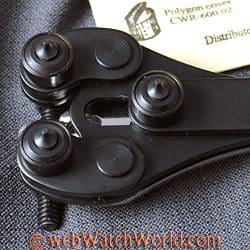 There are other specialized case back removal tools for watches like the Rolex and others, but a sticky ball; a dive watch removal tool with an assortment of bits; a case back knife and a case press should suffice for the vast majority of watches you might encounter.

Removing and replacing a snap-on case back is the first skill needed to replace a watch battery and it’s a relatively easy job that is made easier the right tools. An inexpensive case back opener knife and a case press should cost less than $30.00 total, which is less than the cost of 3 watch battery replacements. Plus, you can amaze your friends with your new-found skills and tools!