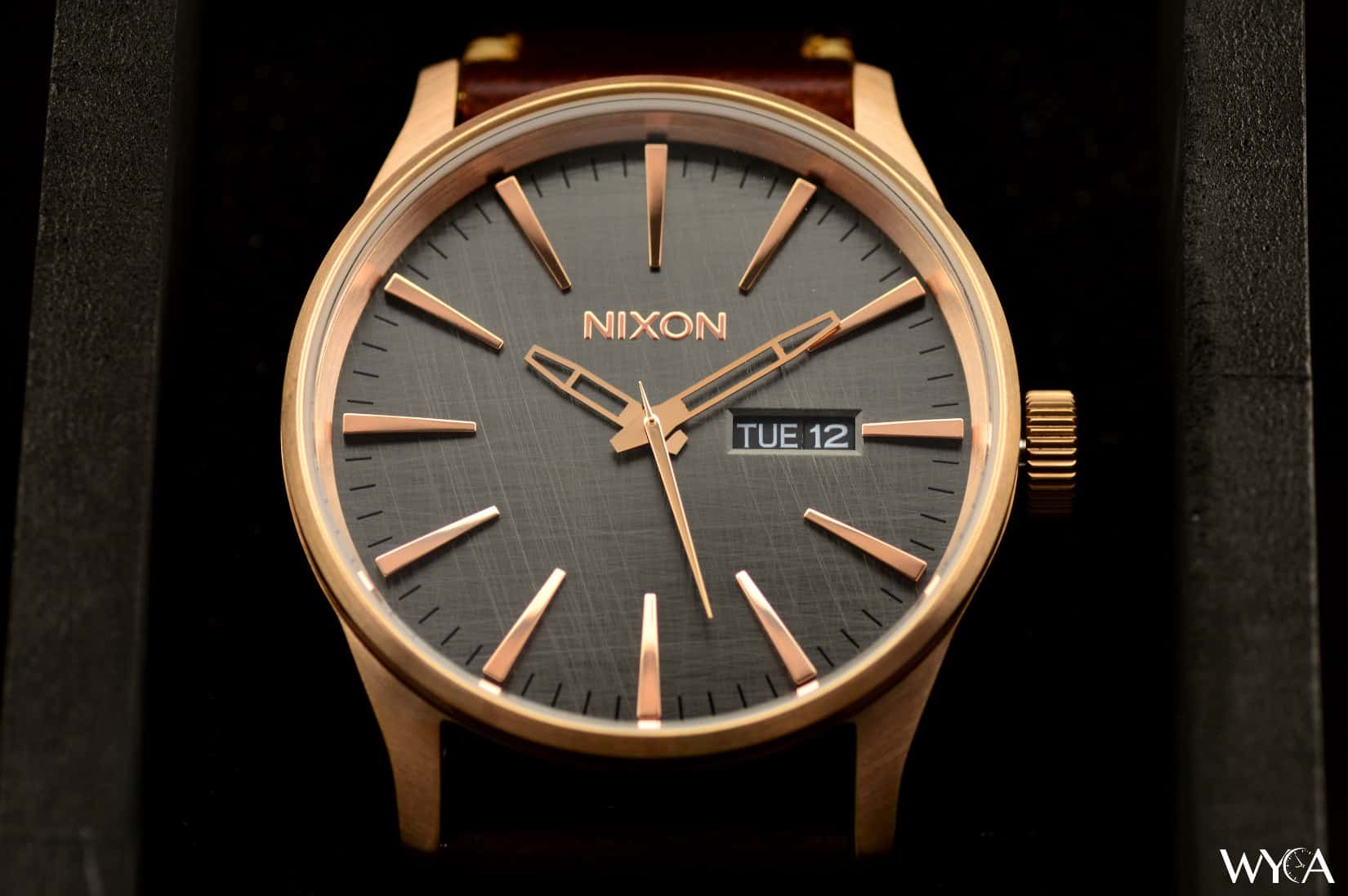 Nixon watches are known mostly for their fashion

The Nixon Sentry that I have in front of my lens is arguably one of Nixon’s most popular watches. For someone looking for a watch that carries more design weight than it does mechanical value, the Sentry is a fine choice.

Watch purists decry fashion watches – and with reason – but that doesn’t change the fact that fashion watches dominate the industry. In my opinion, a well-made fashion watch has value, and in that respect, so does the Sentry.

Purebred mechanicals, like the excellent Seiko Alpinist, gorgeous Tissot Squelette, or versatile Hamilton Khaki Field, may be preferred by purists, but for many “regular people”, the value brought by the mechanical underpinnings is hard to appreciate. That fact is why Nixon sells hundreds of thousands of watches per year. 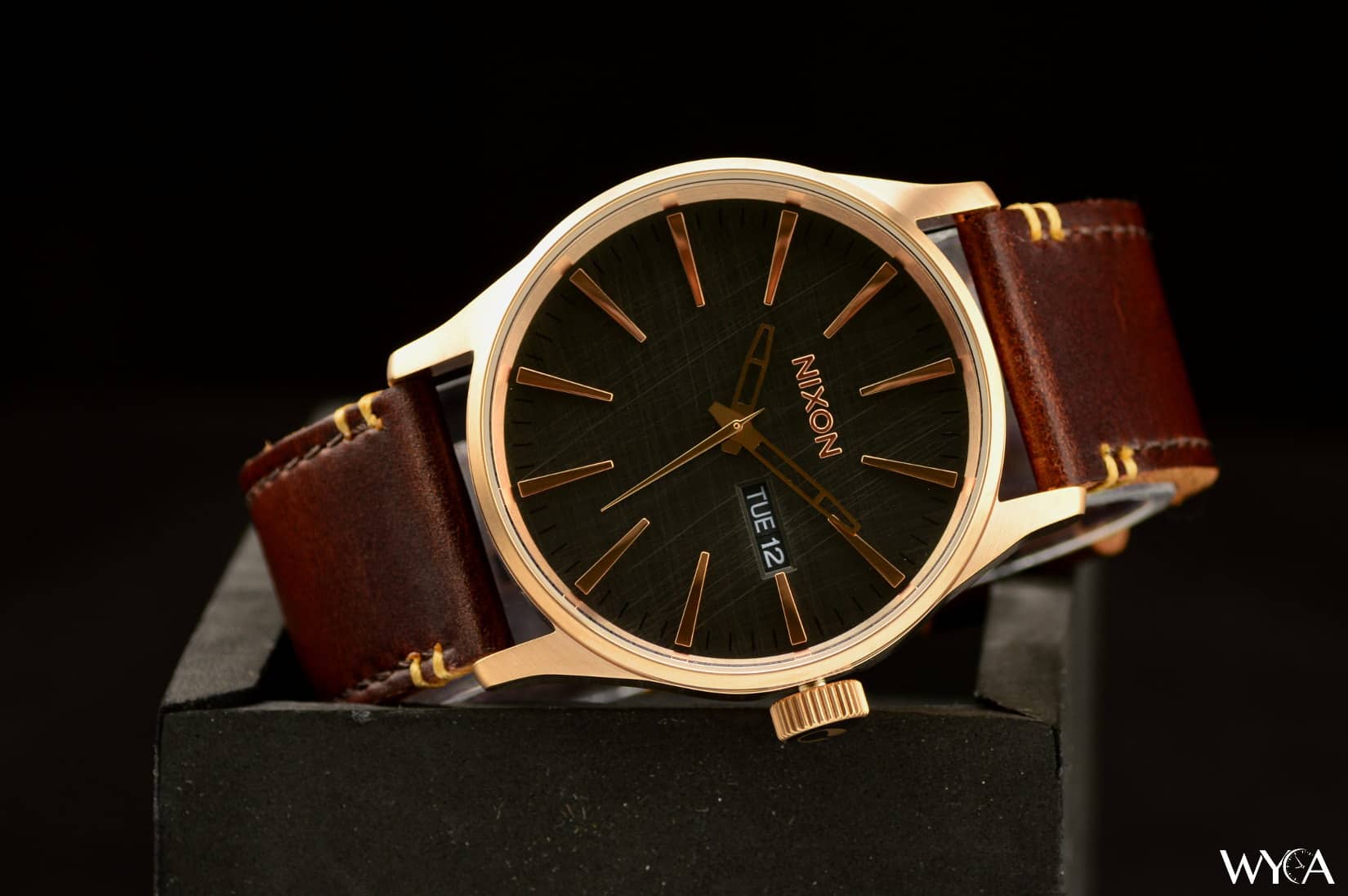 All signs point to the movement being a Miyota, but without cracking open the case and verifying for myself, take that with a grain of salt. That said, it’s more than likely a Miyota due to both cost and long-term reliability. Nixon offers a two year warranty on its timepieces, suggesting that they’ve at least used a decent movement. 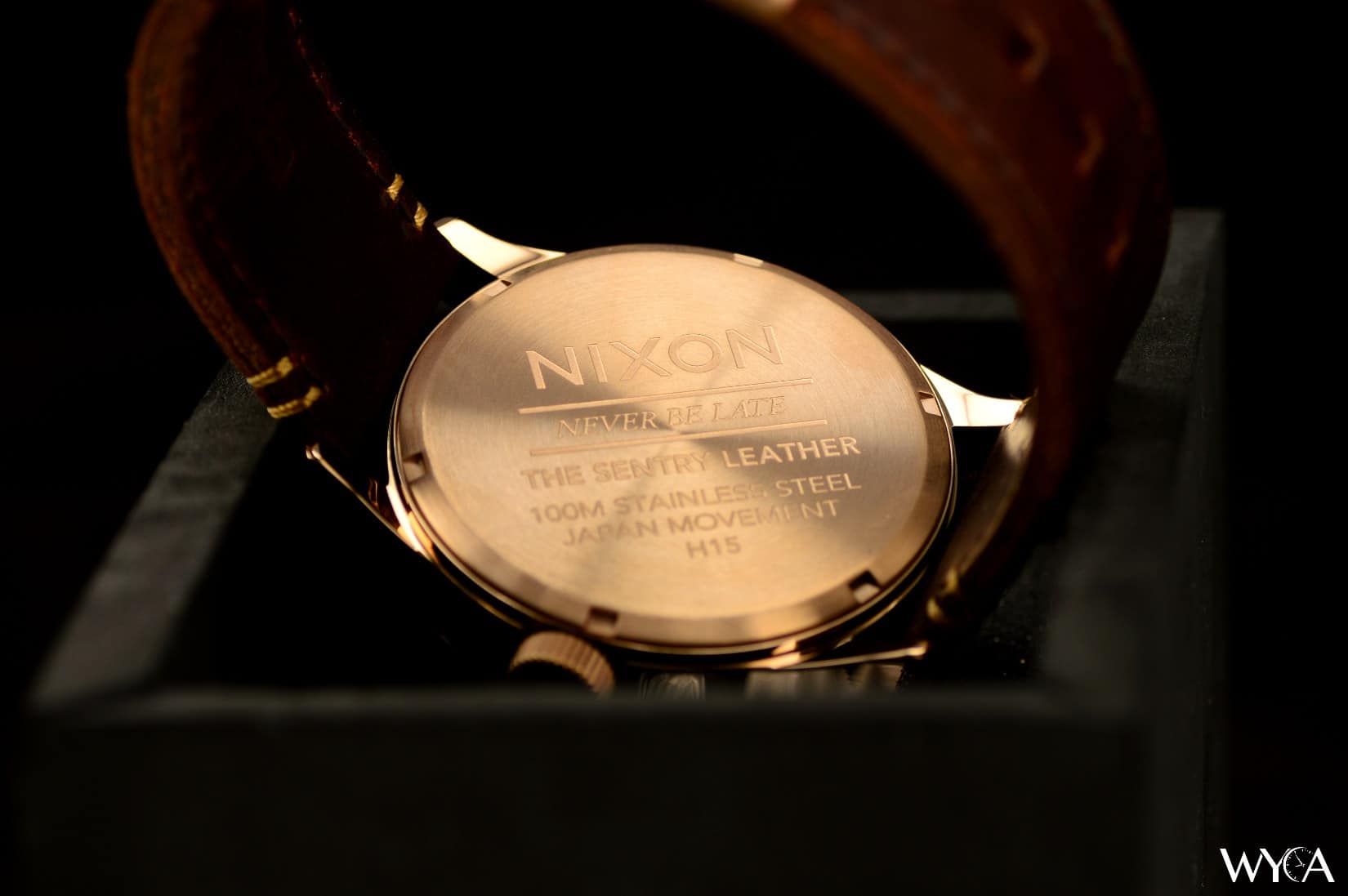 Let’s be frank, though: you aren’t buying a Nixon watch, or really any quartz outside of something horologically significant (like the Bulova Wilton Precisionist or Alpha), because of the movement used inside. If you’re in the market for a Nixon, the day/date complication on the dial is likely the extent of your concern for the movement. Fair enough.

Expect at least 3 years of battery life from the Sentry, with accuracy in the +/- 25 second per month range. For most people, this is more than enough horsepower. 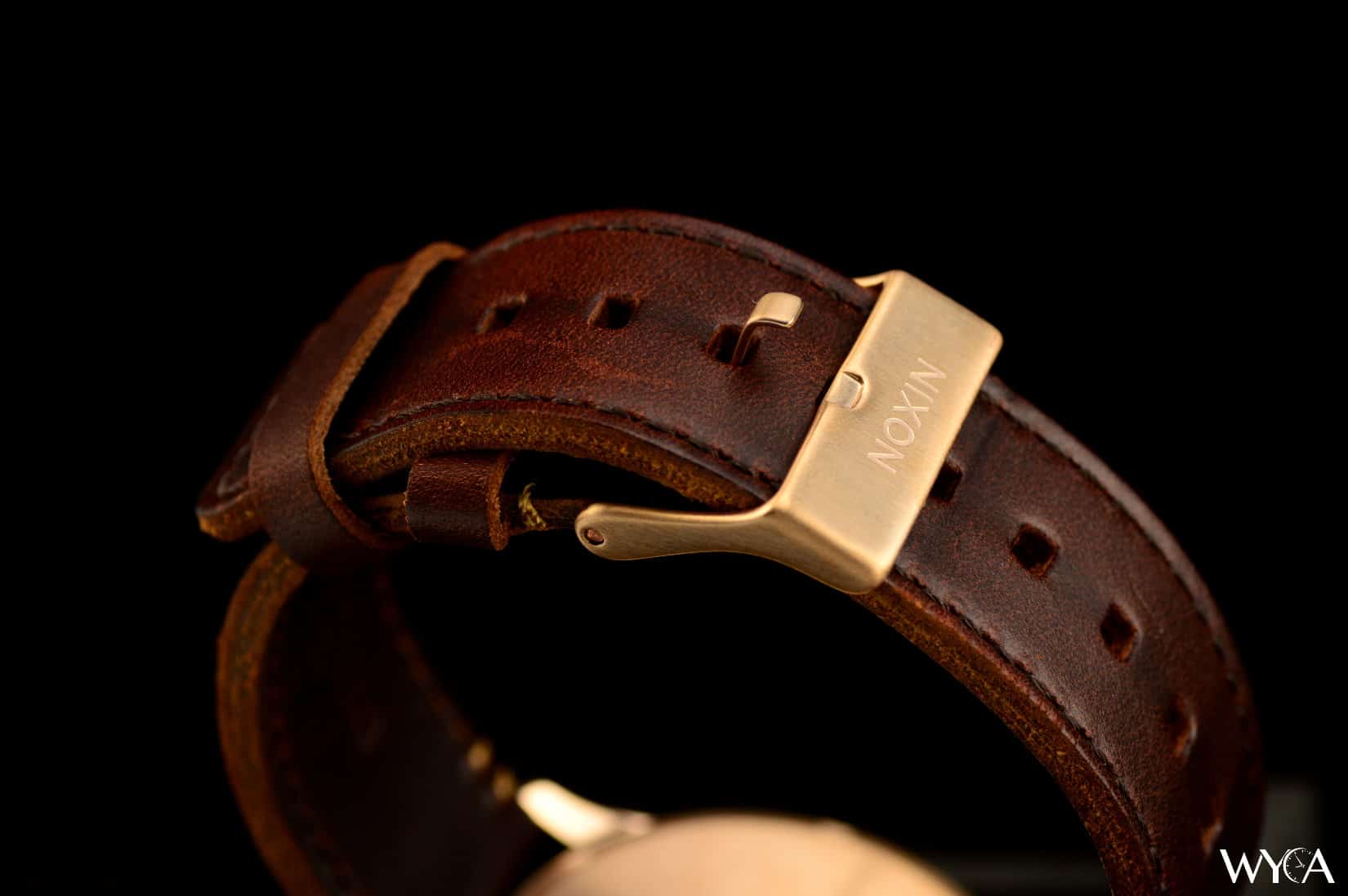 The squellete-style hands look awesome, though they lack any lume so you won’t be telling time at night. The same is true of the prominently raised hour makers, which are tapered to provide the illusion of depth. 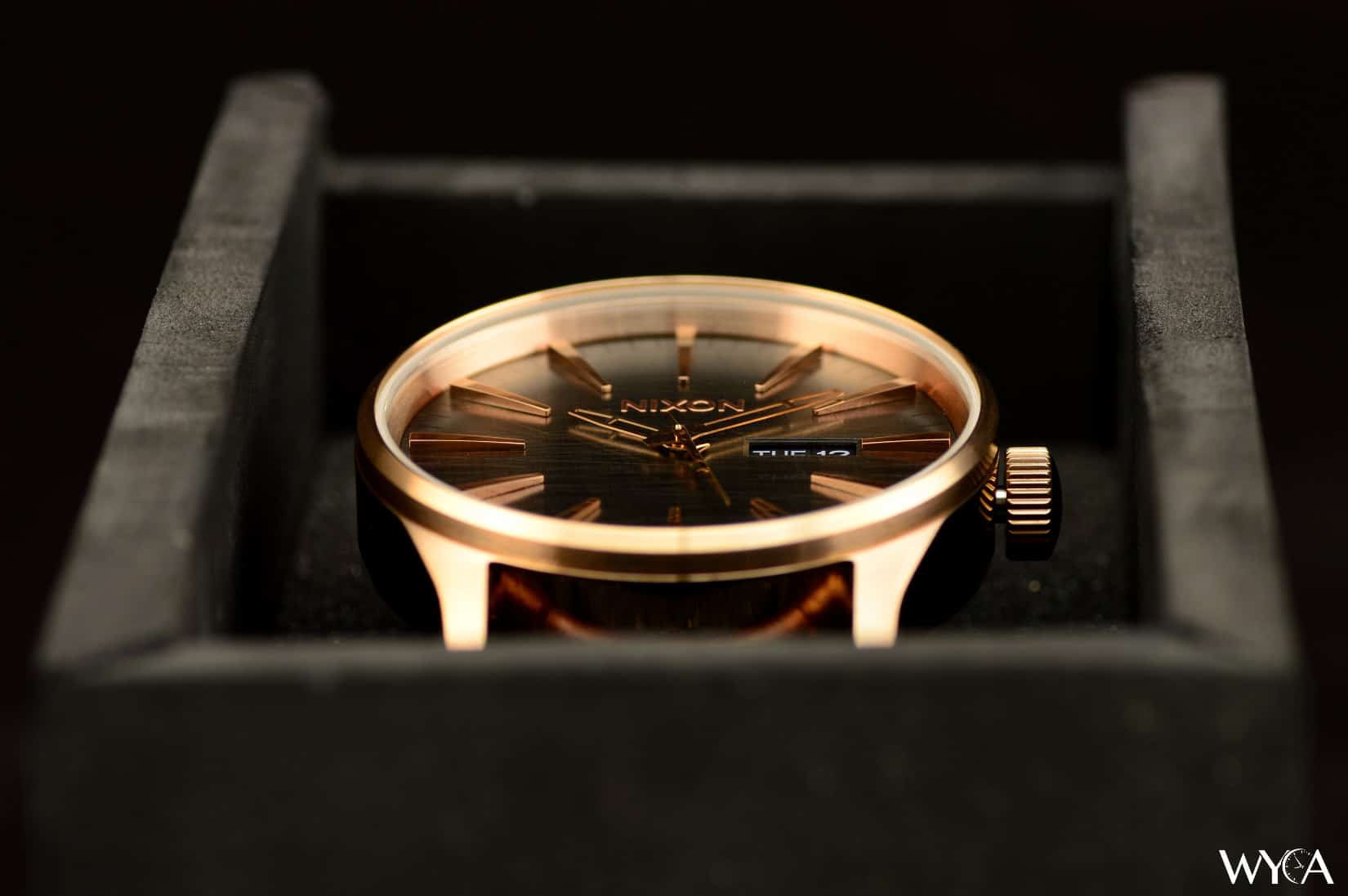 Rose gold can be a tricky material (I returned the Fossil Twist Grant ME1114 twice because of imperfections in the rose gold), but there’s nothing resembling a problem on the Sentry. The rose gold looks great, as does the rose gold clasp (which is engraved).

The real stand-out cosmetic feature is the dial, which looks like a slab of stone recently excavated from a quarry. Obviously it isn’t actually stone, but its distressed face looks the part, appearing naturally carved and scratched. It makes the watch much more cool, and in my opinion, makes this version of the Sentry the best looking of the bunch (there are 24 color options in total). 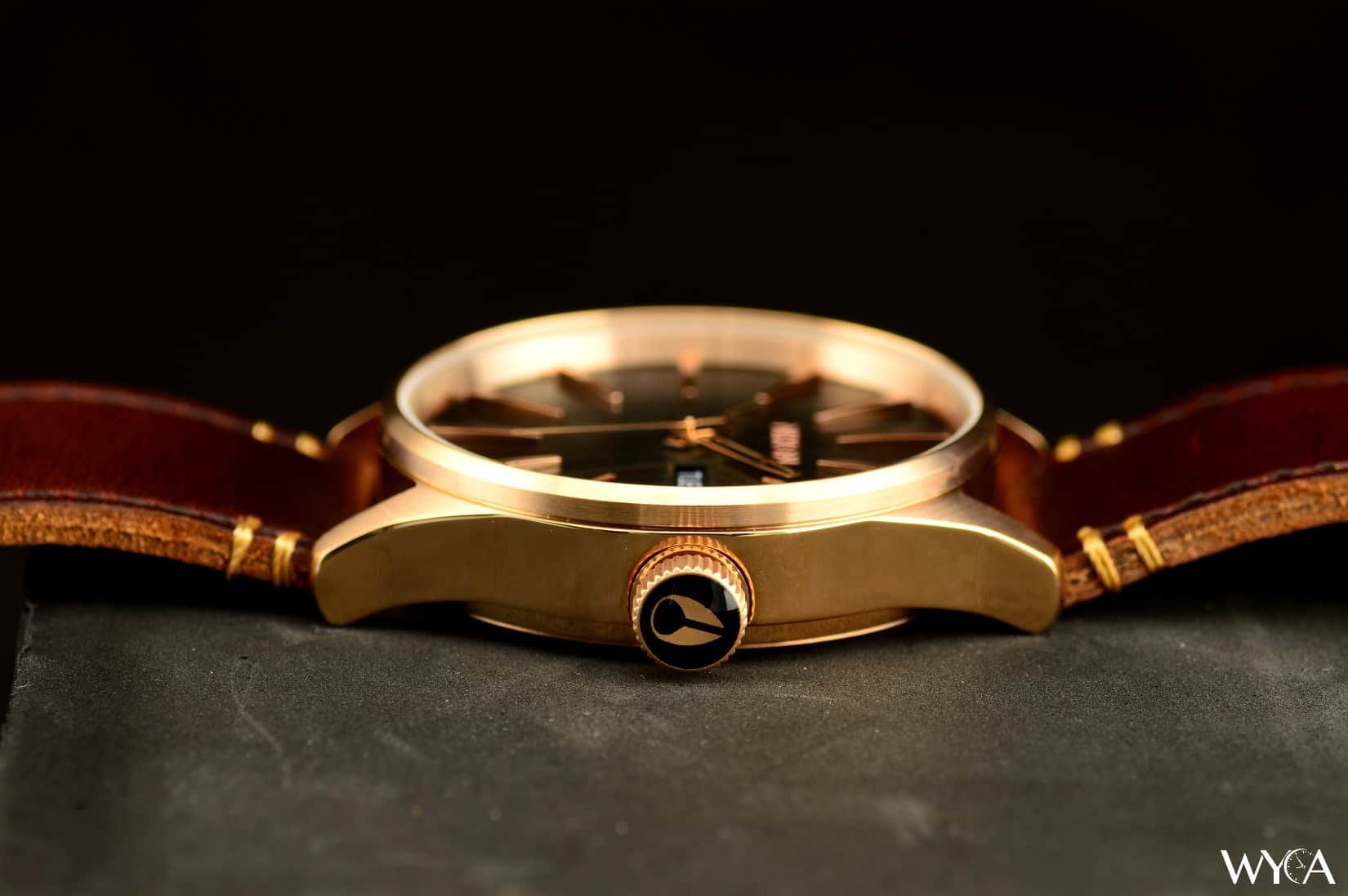 The tapered indices play with light, and as a result the Sentry always looks richer and more luxurious than it really is. For a “non watch person”, there’s nothing visually to suggest the Sentry isn’t a higher end watch. 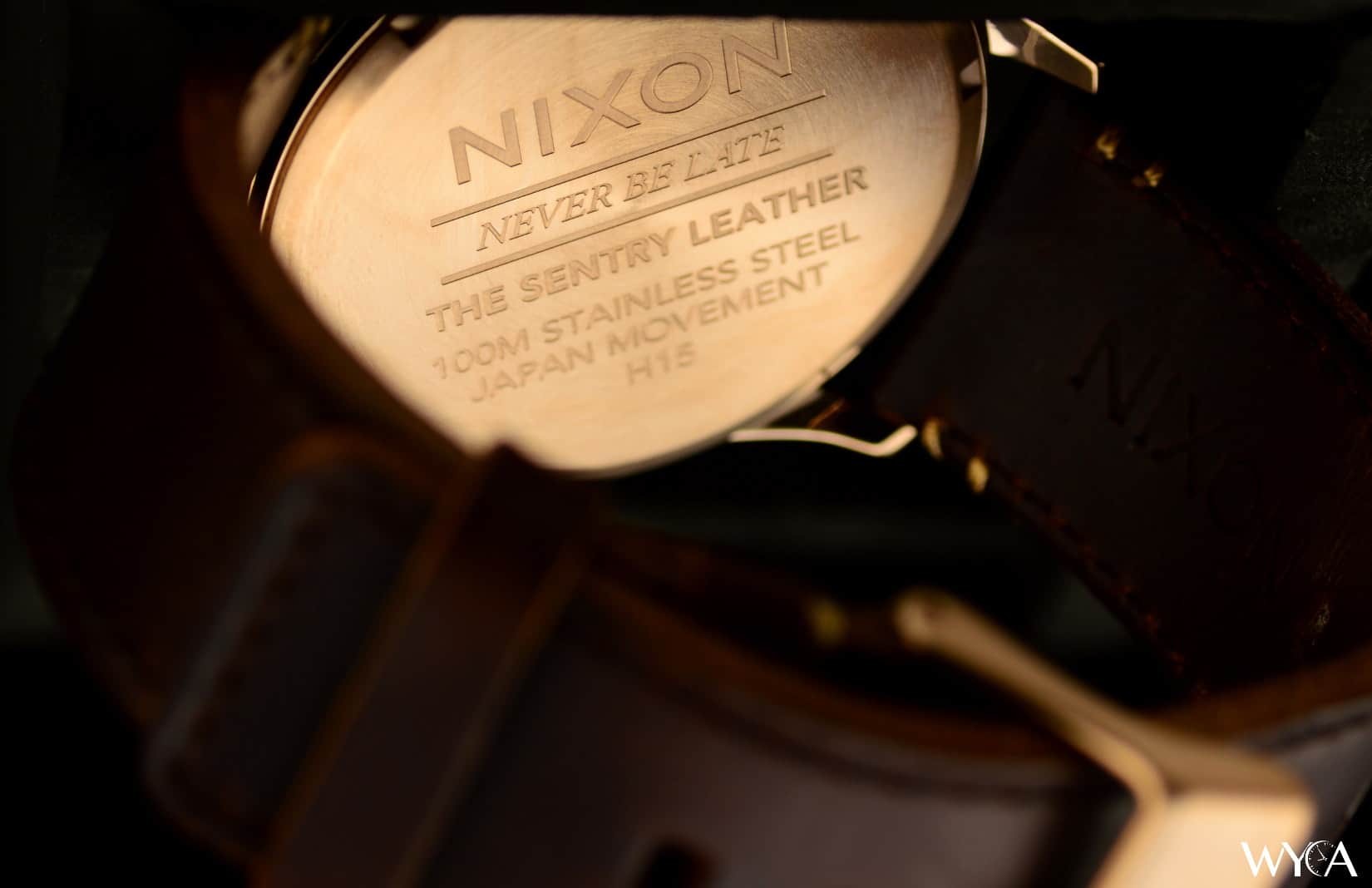 The rose gold coated 42mm steel case looks excellent from every angle. The bezel is nice and deep, giving the dial a feeling of being embedded deep within the case. It looks quality, and this sentiment is reinforced by the enamel-filled crown, which matches the aesthetic perfectly.

The leather strap is soft and plush, feeling more luxurious than the straps that come with many more expensive watches that I’ve reviewed. The strap is 23mm wide and features decorative stitching near the lugs.

Rose gold is again used on the clasp, which matches the look and feels quite solid. As far as the strap/clasp combination goes, Nixon is hitting at or above its price-point. 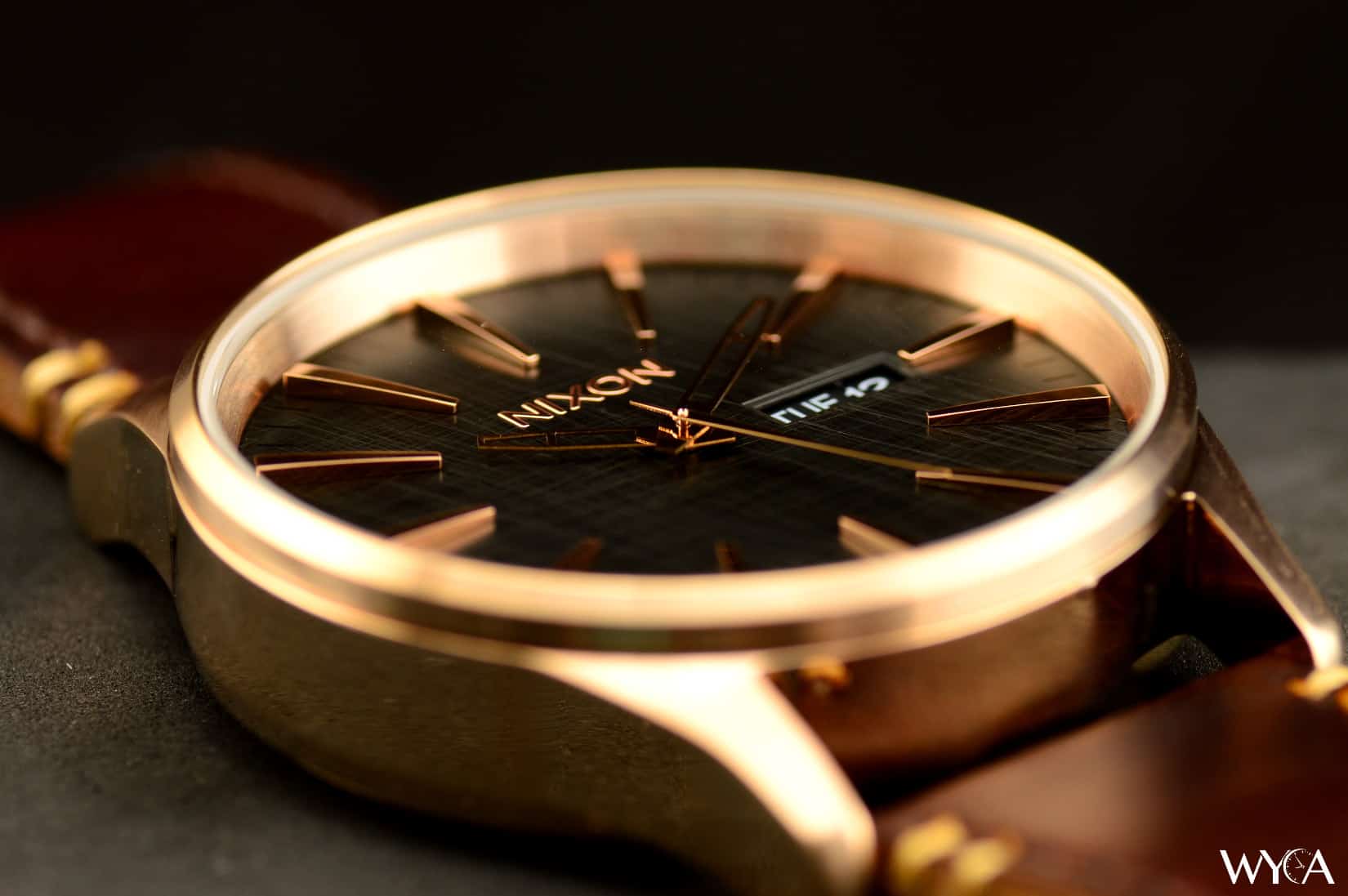 I Can 100% Appreciate Why the Sentry is So Popular

Purists shun fashion watches because they cost a lot for the hardware they bring to the table. At $180 directly from Nixon, this version of the Sentry is not inexpensive. That’s getting into what most people would consider expensive, and because of that I can relate to purists that shy away from watches like the Sentry.

For $180 you’re getting a nice look, yes, but you aren’t necessarily getting top-end hardware. The crystal is mineral, and the movement is fairly basic. The question is: do most people care, and expanding on that, should they?

Calling a spade a spade, you can easily find this version of the Sentry for sale on Amazon for under $150. I paid $122, and at that price the value proposition shifts in its favor.

I have no reason to believe the Nixon will fall apart. In fact, it looks as good under zoom as watches costing twice or thrice its price, and the use of a Miyota movement gives me confidence in its mechanical longevity.

So I’ll conclude with this: value is subjective. If you don’t mind paying $130+ for a good looking quartz timepiece, and you’re looking for the Sentry in particular, you can make that purchase with confidence. It’s a great looking watch, and it’ll look great on your wrist, too.