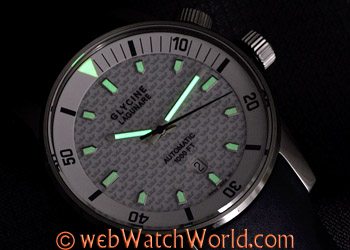 Summary:  The Glycine Lagunare 1000 is another large “style diver” by Glycine, but this watch is a more reasonable size than the big Glycine Lagunare 1000 and it’s also relatively thin for its width. The rubber watch strap supplied with the 1000 could be better and the watch also lacks the minute hash marks missing from the 1000, but the face is easy to read and the watch is highly accurate. 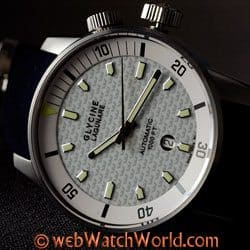 The Lagunare wristwatch series is very popular with Glycine fans. Glyince was at the forefront of the move to large watches and the Lagunare line includes the 1000 shown here; the Glycine Lagunare 3000 reviewed previously on webWatchWorld; and Glycine recently added chronographs to the series.

And don’t forget the Lagunare automatic, also a popular wristwatch but with straighter lugs that make it a bit more difficult to wear.

Both the 1000 and 3000 have no minute indices between the five-minute marks. This is was done as an obvious styling strategy but it almost immediately disqualifies them from diving. The absence of minute marks brings up the other curiosity I mentioned in the Lagunare 3000 review; some of the series is COSC certified, but to have no minute indication on a COSC watch makes no sense to me at all. 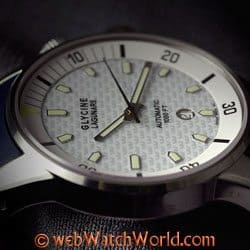 The Lagunare 1000 (Lagunare is the Italian word for “lagoon”) is the third largest Glycine wristwatch made at the time of publication. The Glycine F-104, which I’ll also review, is a monster at 52 mm across, not counting the crown. A smaller F-104 has recently been released by Glycine, with a “modest” 48 mm diameter.

Another huge Glycine is the Lagunare 3000 I reviewed previously; at 46 mm across and nearly 18 mm thick, it was simply too big and too thick for my 7.25″ wrist. It is rated to a 3000 foot depth; fairly ridiculous when you consider that it’s not a serious dive watch due to the lack of minute indications.

I think the Lagunare 1000 is probably the most reasonable of the series for one good reason: it’s “only” a shade over 12 mm thick. It’s listed at 13 mm in the Glycine catalog and I measure it at only 10.3 mm thick at the edge of the case, with the watch back protruding slightly to add the final thickness dimension.

But the watch can at least be worn under a slightly loose shirt cuff and the lugs have a mild downwards curve, which helps matters. The Lagunare 1000 comes on what feels like a synthetic rubber strap and Glycine includes one of their leather straps in the box and there’s also a (rare) version on a bracelet. I have also heard of owners buying the official Glycine bracelet separately, but I think this watch fits best with a very soft silicone strap, as I’ll describe next. 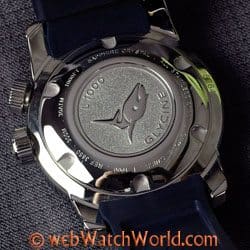 The Lagunare 1000 is (or was — it is currently listed as “out of stock” in the Glycine catalog) available with a gray face; the white face shown here; an all-yellow version with yellow strap; and an all-orange version with matching strap.

The case is stainless steel and it’s either highly polished or chrome plated or possibly a combination of both. It’s not too difficult to get a good polish on it if it becomes lightly scratched. The polished finish is repeated on the small plinths that hold the generous lume dots on the face of the watch. The plinths are surrounded by chrome and they are raised from the surface of the watch, creating a nice three-dimensional look.

Some people don’t like the repeated Glycine crown logo on the face of all of the Lagunare 1000 watches, but I think it looks nice and breaks up what would be an otherwise massive surface of white. 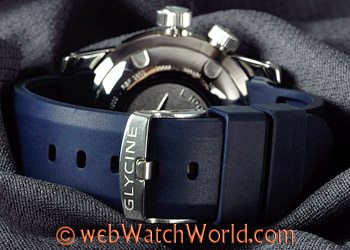 I recently sold the 1000 shown here, and it was a quick an unexpected sale so I didn’t have a chance to weigh the watch or take the final dimensions, including the lug-tip-to-lug-tip distance, which I believe is 54 mm. My wrist dimension of 7.25″ is around the minimum for this watch.

The synthetic rubber strap that comes with the watch is curiously short; it had barely enough room to fit my 7.25″ wrist, and since the watch really fits best on wrists over 7.25″, owners may have to fit one of the extra-length dive straps available from third party retailers.

The Glycine strap is curved and completely fills the 24 mm space between the lugs, which is one of the features that attracted me to the watch in the first place; I’m not a big fan of watches with a lot of space showing between the end of the strap and the watch case. But the strap could use a better design. The part between the lugs is too horizontal with the plane of the watch face, making it difficult to bend the too-stiff strap down around the wrists.

This could have been solved by making the strap fit at more of a downward angle at the lugs, perhaps by drilling the springbar hole up closer towards the top of the strap and cutting the curved end that fits against the case at an angle. I put aftermarket silicone straps on almost all of my dive watches (and others), because the soft and pliable material makes it much easier to fit the watch closely to my wrist and I can usually cinch up the strap to one tighter hole than otherwise, while still providing a comfortable yet tighter fit that keeps the watch from moving around.

I never tried the leather strap that came with the 1000 because I’m not very fond of the standard Glycine leather strap that seems to come with all of their watches. It’s either brown or black and has what I think is a cheap-looking and too-thick white stitching pattern. The leather is stiff and never seems to soften up like it does on the Hirsh or other thick leather straps I’ve tried.

So the bottom line here is that watches the size of the Lagunare 1000 have a more critical fit factor than smaller watches and it may be necessary to do a bit of customization to find a comfortable and correct fit. Owning the Lagunare 1000 helped me realize that the perfect watch dimensions for my wrist circumference and shape is a 42 mm wide by about 10 mm thick; like the Glycine Combat Sub, a classic dive watch that fits me perfectly.

The Lagunare 1000 has excellent lume. Glycine lists it as Superluminova. The triangle marker on the bezel is also lumed, although the sweep seconds hand is not.

The other interesting feature particular to the Lagunare 1000 is the internally rotating bezel. This requires a secondary crown at the two o’clock position. It’s a screw-in crown that must be unscrewed and pulled out to turn the bezel, which is not uni-directional. Once the bezel is set, the owner must remember to screw in the secondary crown again to maintain the waterproof integrity of the watch.

The ETA 2824-2 movement hacks and has a quick-set date. The main crown is threaded and it hangs down slightly from the relatively thin case, another design quirk.

The Lagunare 1000, at least in the white version shown here, is very easy to read. This is, of course, helped by the enormous surface area on the face, but the overall design lends itself to good readability.

The watch has just enough chrome or polished stainless steel on the face to add a twinkle when it catches the sun, and I never found a lighting situation that made the watch anything but easy to read, so I give it high marks for that.

The original list price of this Lagunare 1000 was $2,495.00, but all of the Glycine list prices are a bit ridiculous, especially considering the company fits standard ETA movements into the cases. In other words, Glycine is not what I’d consider a true watchmaking firm with their own movement designs — although few of those companies exist nowadays, unfortunately.

But the list prices of Glycine watches are pretty much imaginary, with many examples to be found at 30% to 60% off list, even from authorized dealers.

The Lagunare 1000 is another unique watch from Glycine. It’s size is both its attraction and potential downfall for owners. This is a watch you should try first before buying and they can be frequently found for sale in like-new condition, offered up by owners who don’t quite get on with the size.

But if it fits, it’s a unique watch that will definitely get compliments; in fact, this is one of the very few watches that I’ve ever owned that did get compliments in public. I wouldn’t buy one for serious dive work, but very few mechanical watches are used for diving today anyway.