Skip to content
Home » Swatch Originals “Swiss Around the Clock” 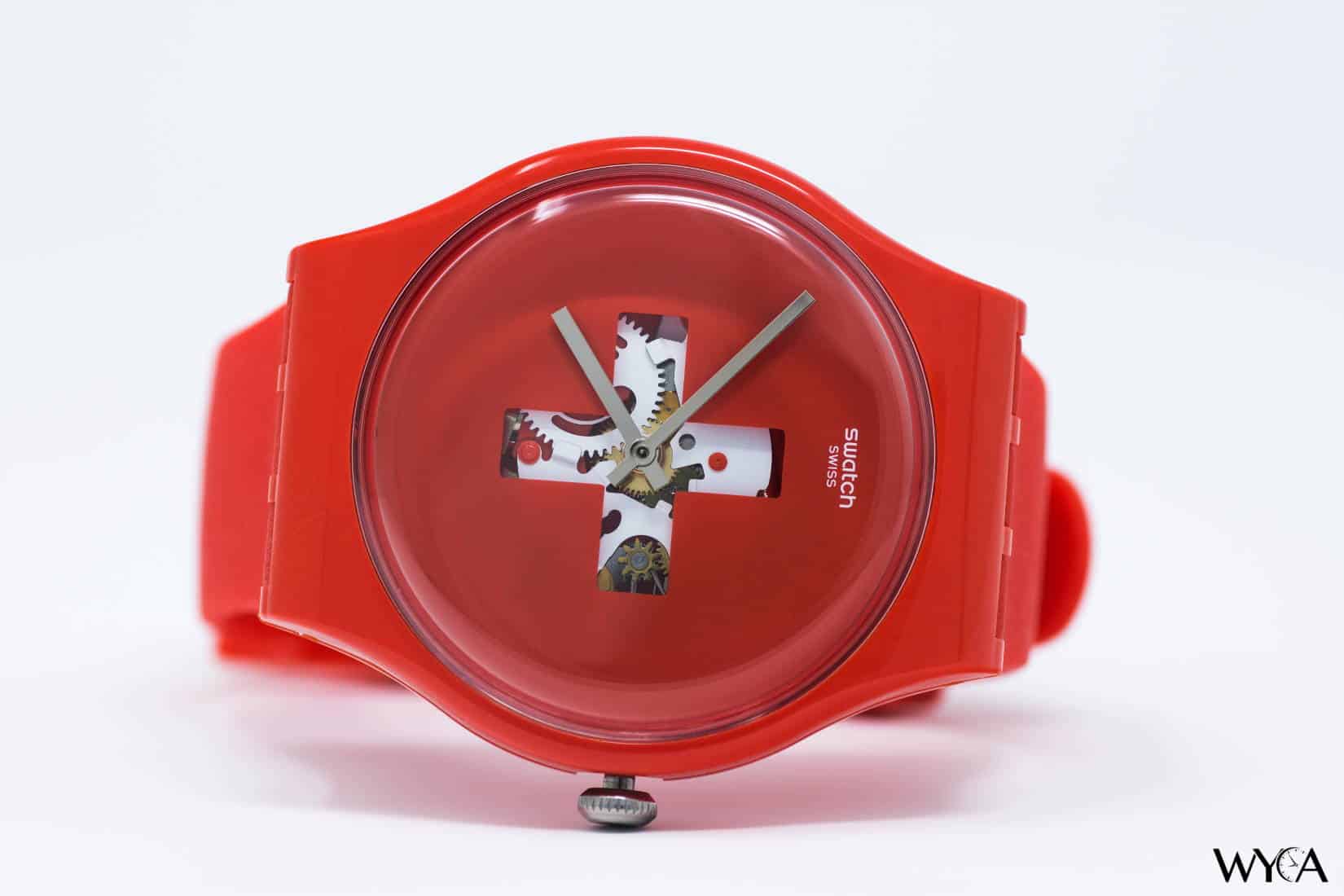 The Most Fun Your Wrist Will Have For Under $75

The Swatch Swiss Around the Clock – released in 2017 – takes a similar approach to its appearance as the Irony Body & Soul I reviewed in August, displaying its quartz movement through an open heart dial. Not quite a skeleton, but satisfying nonetheless.

It’s somewhat rare for quartz-powered watches to show off the movement, and that’s a shame: a quartz might have fewer gears to look at, but they’re still interesting in their own right. That’s how I felt when I bought my Bulova Accutron ii Alpha, and clearly, the Swiss Around the Clock agrees with my sentiments.

The AtC is also the most visible watch currently in my possession. Its 41mm case and silicone band are both bright red, and the mechanicals – mostly white and gold – contrast against the red intensely.

Encasing the dial is a domed crystal (plastic). Aside from the dial, little fanfare is given to the rest of the watch. It’s an ocean of red plastic once you look beyond the crystal.

The color is certainly polarizing, but that doesn’t make it a bad watch. In fact, I think it’s a fun watch. Aside from the obvious aesthetic difference compared to most watches in this price range, the AtC also gets bonus points for the visible mechanism. Some people – myself included – dig the sight of the mechanism that makes the watch tick.

CertifiedWatchStore.com generously provided WYCA with this Swatch Around the Clock for review. If you’re going to pick one up, we’d love it if you considered them! 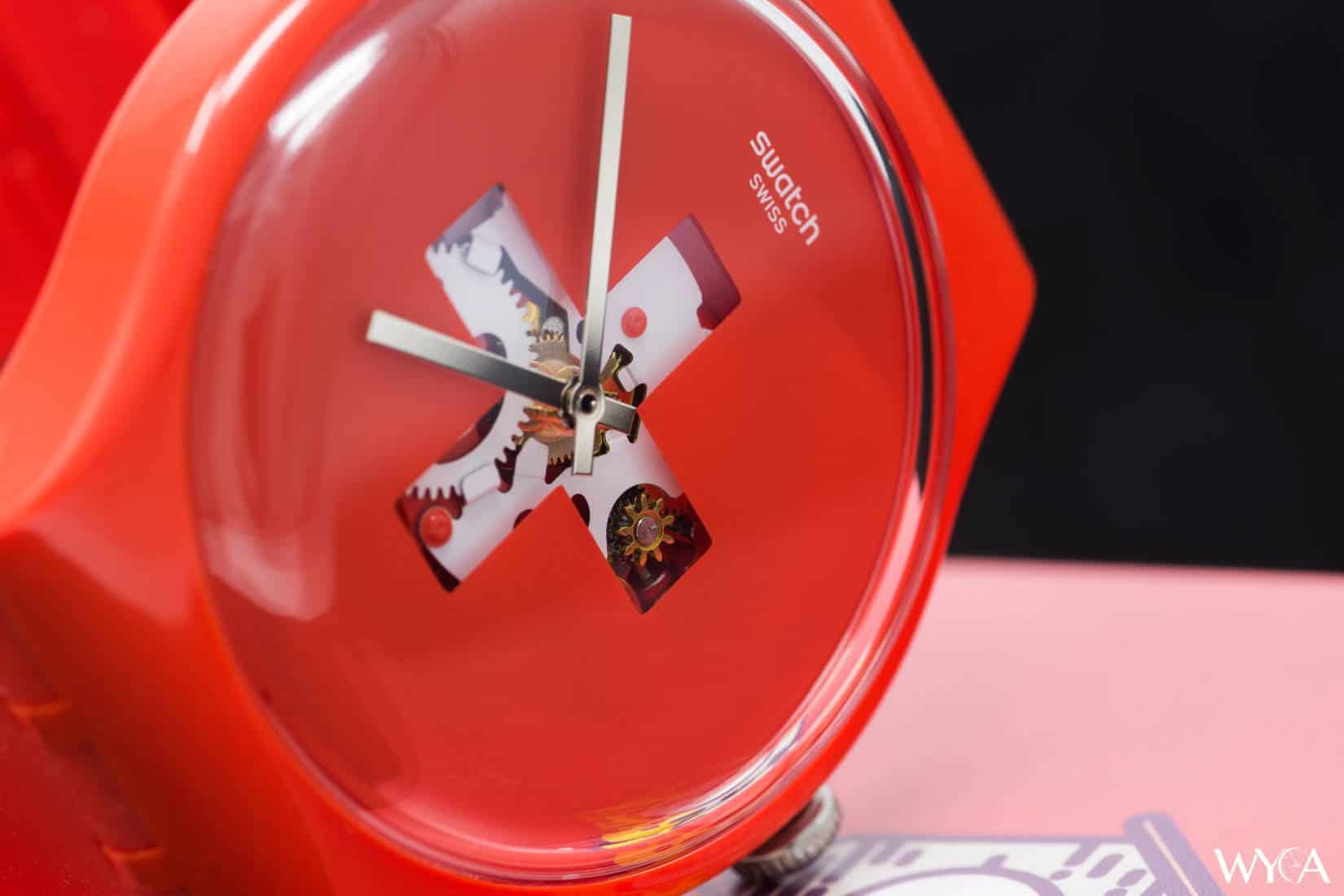 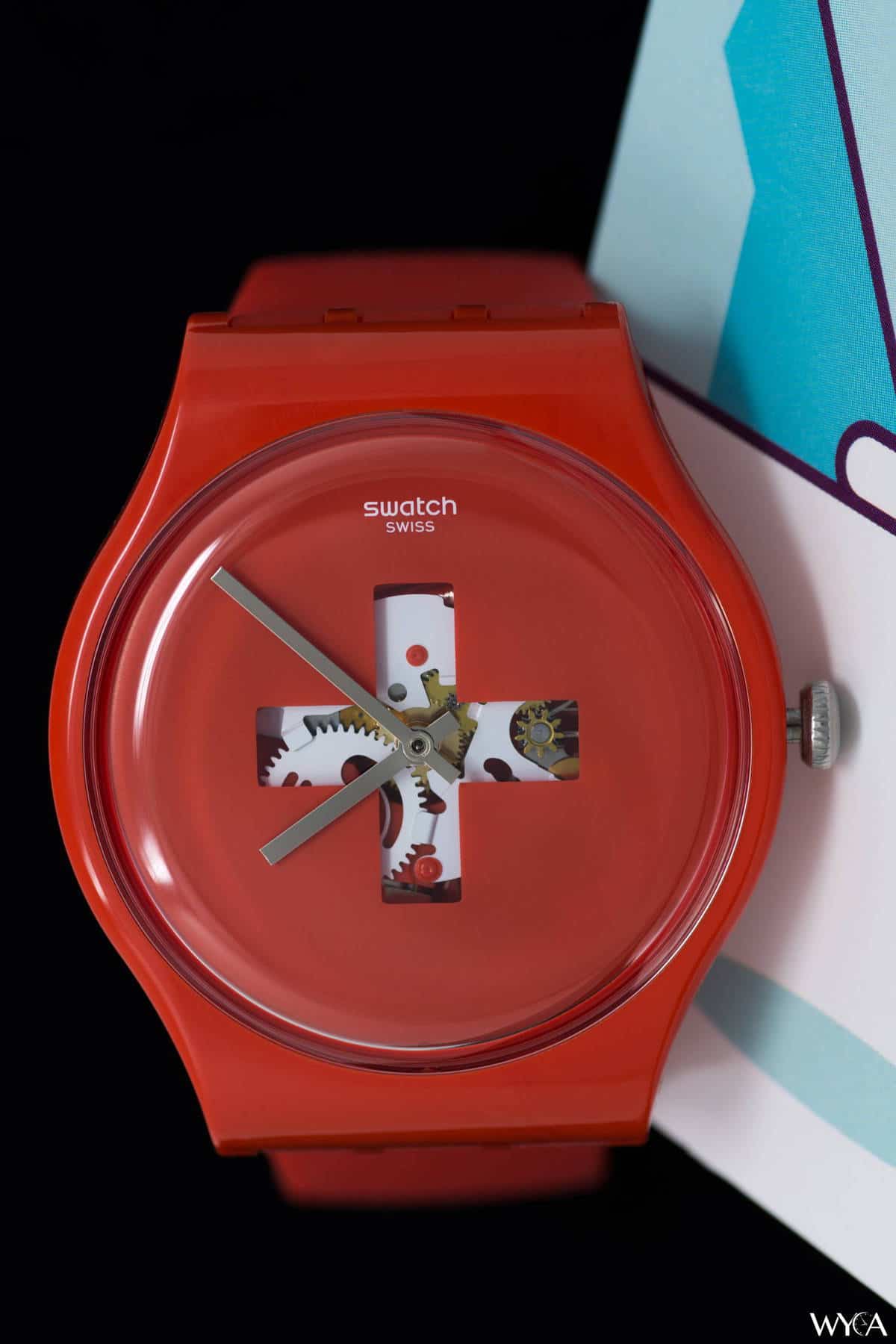 The Swatch Group is one of the largest conglomerates in the watchmaking world and owns brands that range from low-end to outright luxurious. Among them include Bruguet, Blancpain, Glashütte Original, Omega, Longines, Rado, Tissot, Hamilton, Mido, Certina, and a few more.

They also produce watches under the Swatch brand. Commonly found in shopping malls and usually made from plastic or rubber, you wouldn’t be alone in associating a Swatch watch with something that is more stylistically focused versus something that is horologically significant (or even relevant). Yet, you’d be wrong.

Learn more about Swatch and their notable history. 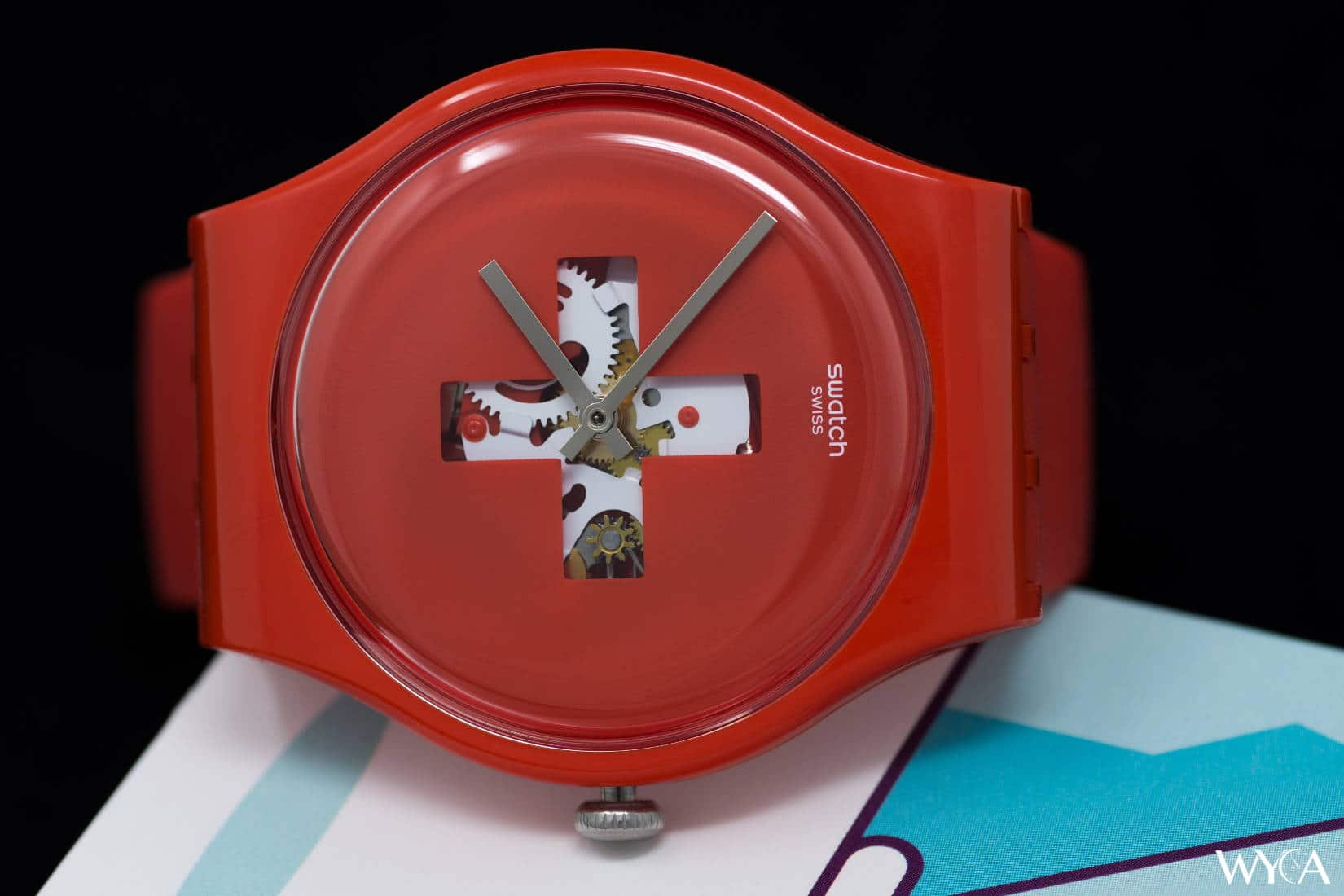 Around the Clock and On Your Wrist

The Swiss Around the Clock really, really wants you to know that it’s Swiss (really!). Not content with being named Swiss, or having the word Swiss on the dial, Swatch has also plastered a Swiss cross front and center, filling its viewport with white and gold mechanical components.

So yes, you are effectively wearing a Swiss flag on your wrist.

This gives the AtC its own distinct personality, totally unlike the 39 other watches currently in my possession. Lacking any complications, this Swatch is as set and forget as it gets. Its only job is to tell time – which it does, loudly (Weekender style) – and look good doing it. 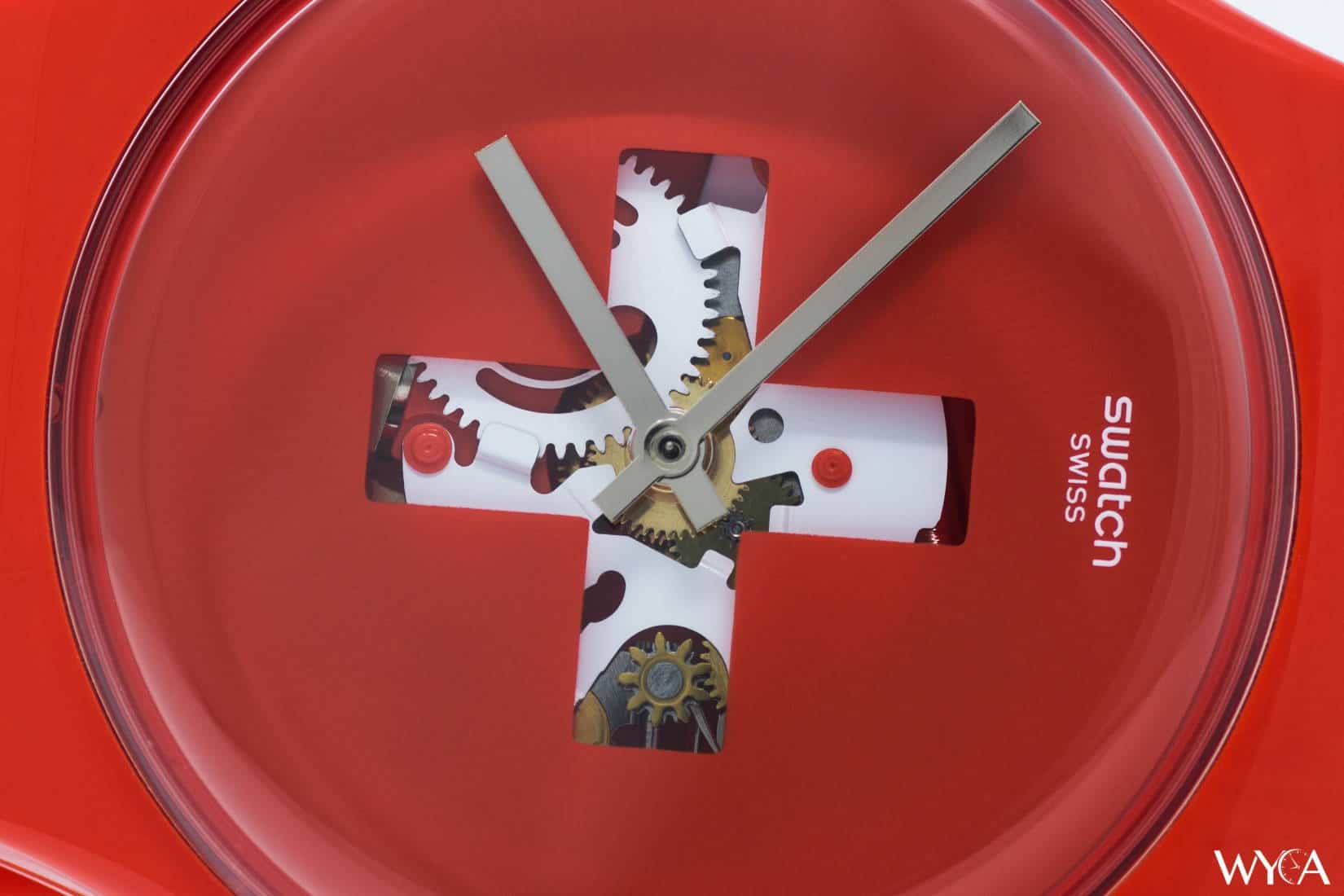 Impressively, the finishing and quality of color/fill on the movement is quite good, making for a very convincing white fill. It’s only up close that you see the gold, and you have to get even closer still to see the touch of blue on one of the golden gears.

As a Swatch watch, there is ample plastic both inside and out of the case. Many components of the movement are plastic, though most friction-prone pieces are metal. I’m sure it’ll wear fine, but be prepared to toss it if it ever needs anything other than a battery. Swatch’s aren’t the most repairable.

The quartz movement inside the SUOR106 ticks as loudly as any Timex I’ve worn, and that is something of an accomplishment. I’ve honestly believed that Timex deliberately engineered the movements in their Weekenders to be the tickiest tickers out there, but I’m quite sure this Swatch will give Timex a real run for it.

Lacking a seconds hand, the sound of the ticking is the only indication that the AtC is engaged. That is, of course, until you get ultra-close with a macro lens, wherein you can then see the second’s mechanism working away underneath the uppermost gears. 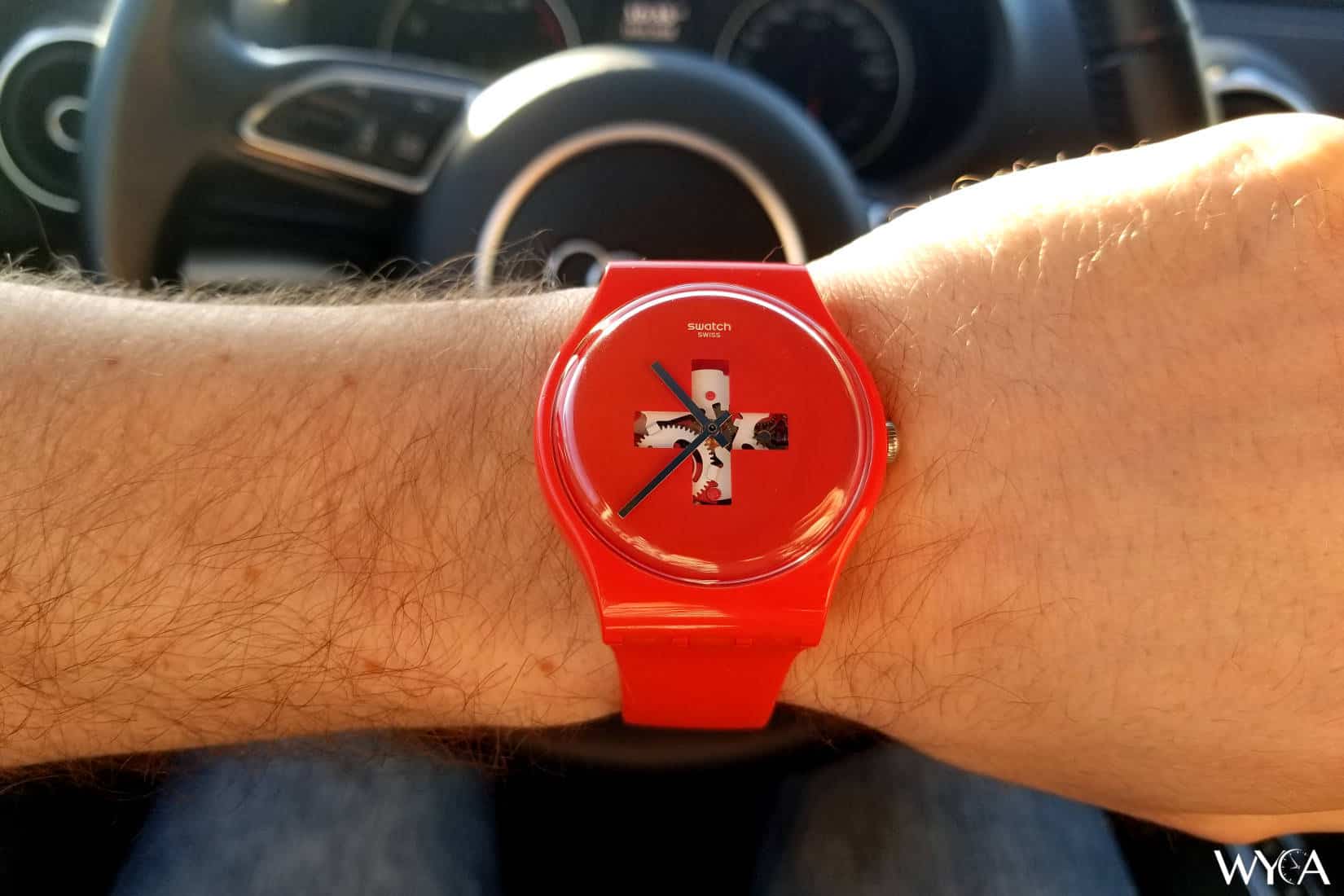 This Swatch looks perfect for just about anyone that wants something bold to match or make an outfit. It’s hard to wear discreetly because it’s the exact opposite of that, and that’s a big part of what I like about it.

With smartwatches and connected watches filling the shelves today, it’s nice to see Swatch representing the mechanical in its gear. With a comfortable silicone strap, the AtC is comfortable to wear for long stretches. It’s come to the office and back a few times without my desiring to take it off or finding it bothersome.

This is a great watch to start someone’s collection, gain an interest in horology, or just have something unique to tell the time on. I like it because it’s simple and inexpensive. I’d rate it higher if it were made of better stuff and if the strap wasn’t an integrated configuration. I don’t see the case or crystal holding up well to spirited wear, either.

For a first watch, or a peacock watch, or just a fun watch, this Swatch looks the part, and for the right owner, it’ll be a good buy. Fail to take care of it, though, and its fragility will become obvious with each new scratch on the plastic crystal. I guess you can’t win ’em all.

Swiss Around the Clock Gallery

Our friends at Certified Watch Store sent us this Swatch for my review. I wore the watch for a period of 1.5 weeks before writing this review.

We have an affiliate relationship with CWT. If you purchase the watch after clicking on a link to their site from ours, we will receive a small commission from that transaction. This is the primary method that we use to monetize the website and fund our costs (which, to date, has included nearly $5,000 in camera/lighting equipment, $50/mo software/hosting fees, etc.).

We understand that this may skew your perception of our review. We do not slant our reviews based on this relationship. If this makes you uncomfortable but you still want to buy the watch, simply do so from a non-affiliated store. However, we would sure appreciate if you supported WYCA – one of the only real hands-on review sites on the web – by shopping at our affiliate partners.

Thank you for your support!