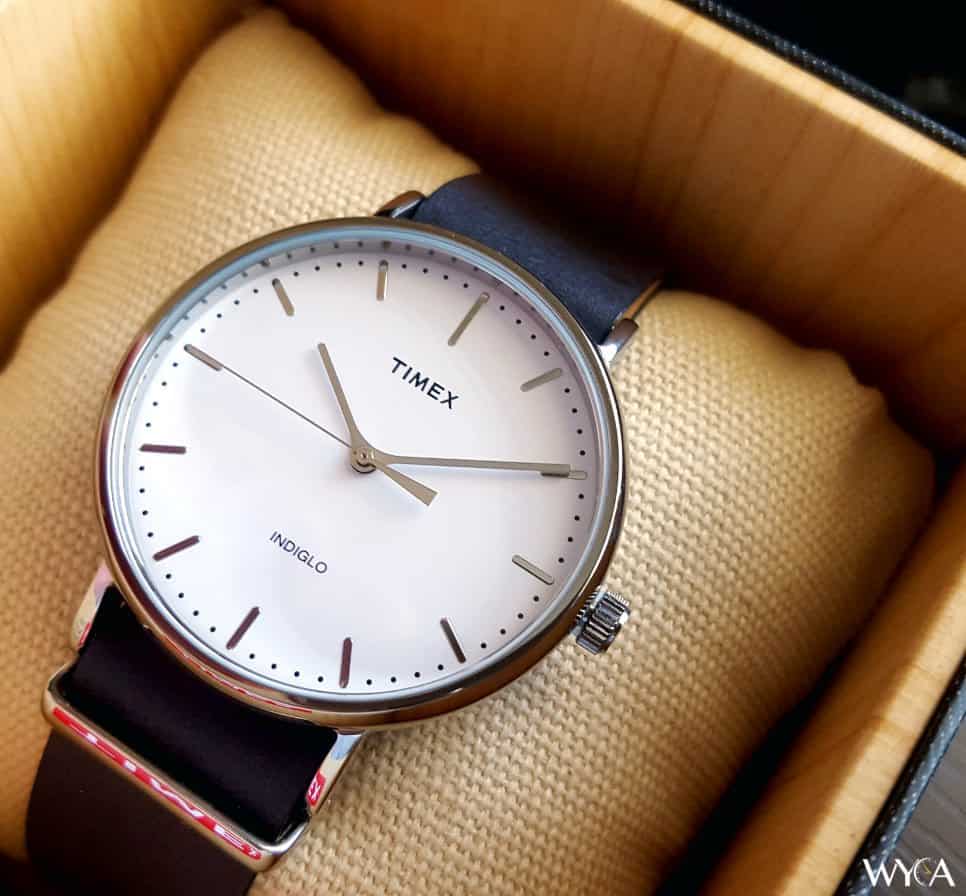 The Weekender line – long lauded by many as the best watch you can buy under $50 – just got an upgrade in the Fairfield. It’s bigger, cleaner, and exudes the same timeless sense of style that I love about the Weekender.

Priced ranging from $52 to $65, the Fairfield retains a low price point- though it’s more expensive than the older versions.

Timex is following a clear trend in watch style, where simple and minimal win out over complicated and elaborate. It pairs this new look with some adventurous straps (beyond the grey leather we’ve got pictured here), and of course, it’s as easy as ever to change said strap if you’re looking to mix it up. 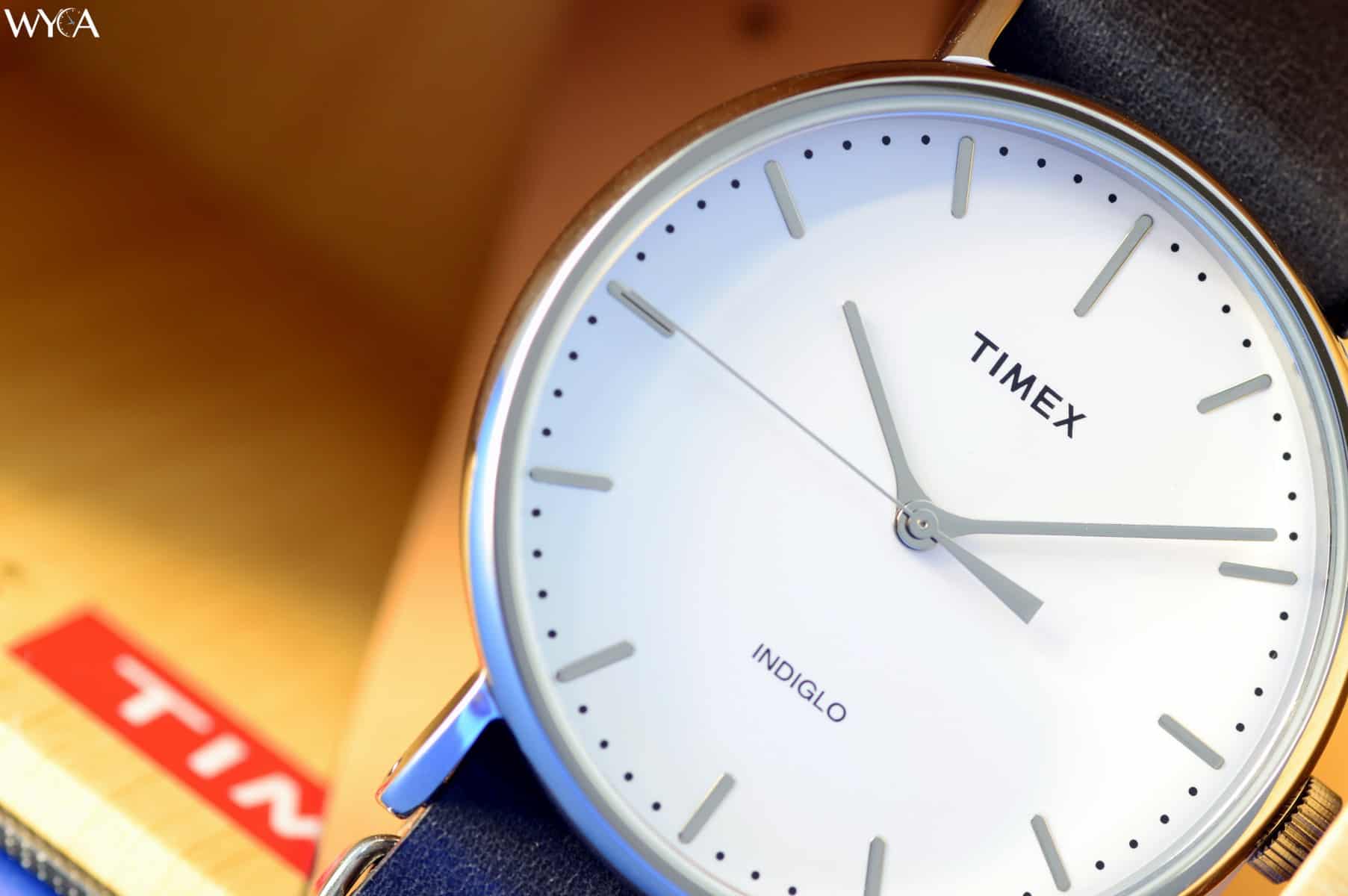 What surprised me is how large it is. On paper, 41mm is a fairly average size for watches today. On the wrist, the Fairfield wears larger thanks to its all-white dial and nato leather strap.

The polished brass case – which is shaped like a shallow bowl – compliments the simple dial, though I think the rose gold version has a bit more style than the steel version pictured here.

One thing I have always liked about the Weekender (even the baby Weekender Reversible) is how easy the watch is to read; at nearly any distance, the Weekender has always been legible. The Fairfield, with its steel hour batons as opposed to numbers, loses that utility. In so doing, it becomes another minimalist piece in what is becoming a sea of minimalism.

Perhaps because of its simplicity, the Fairfield seems devoid of its own personality. The grey leather version I’m wearing here is more plain than personable; the nato straps 100% change this, I think, though I’d want to see that in person before speaking in absolutes. 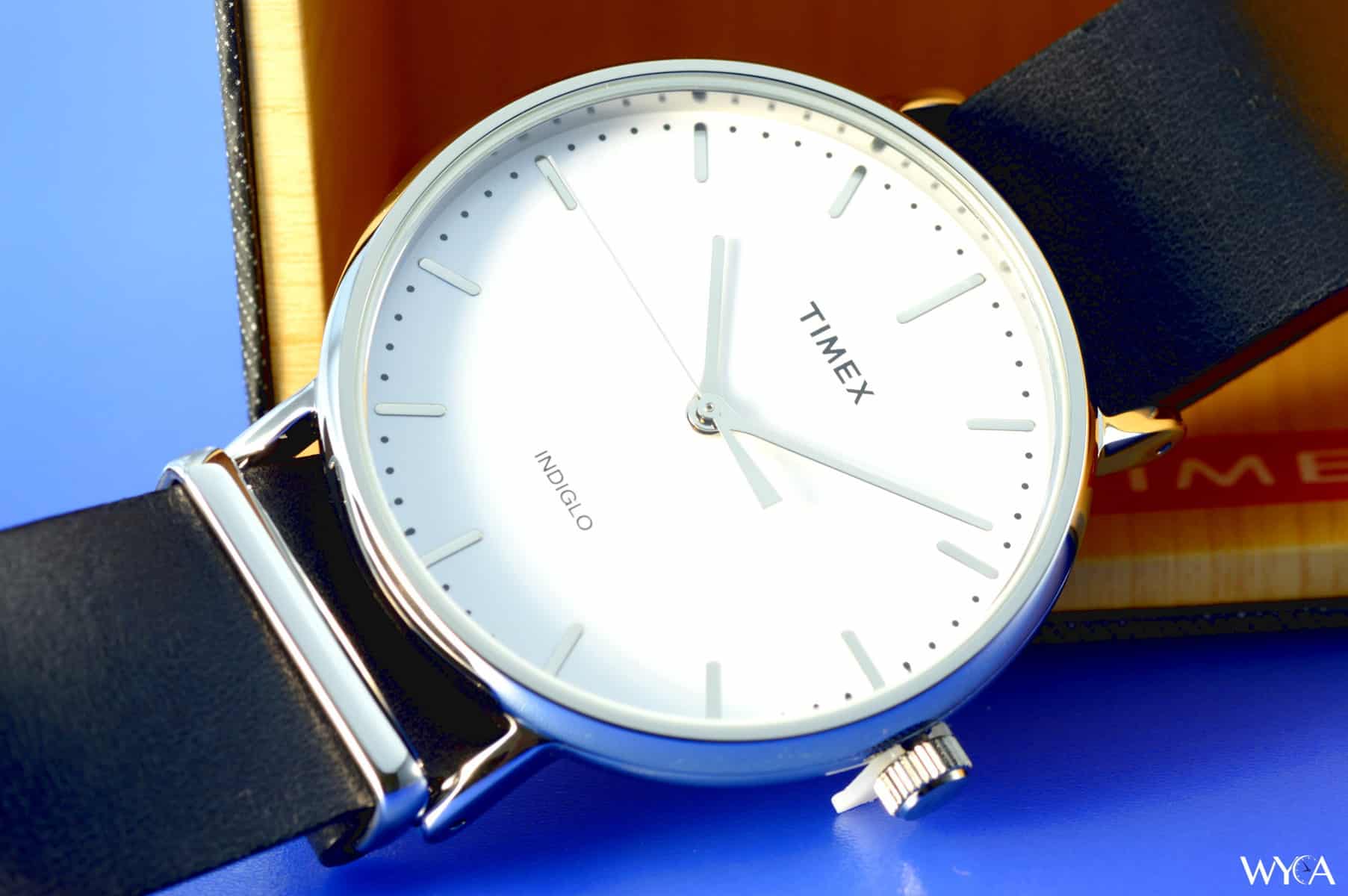 Compared to the Weekender Chronograph I reviewed early February, the Fairfield feels less robust in its build. Under zoom from my macro lens I can see areas where the build quality doesn’t match its look, though I’d put money on you never being able to see said deficiencies with your naked eye.

Its brass case is lightweight; I suspect the case is quite thin (note: I haven’t opened it up to have a look). You can easily hear the movement as it ticks on- a hallmark of the older and considerably less expensive Weekenders.

The flat mineral crystal protrudes ever so slightly from the bezel. I wouldn’t place it face down on any surface as it would be quite likely to scratch. Other than that, the crystal is clear and doesn’t reflect much glare (a boon if you’re an amateur watch photographer).

The dial is where you’ll find the build quality deficiencies under zoom. Almost none of the black dots counting the minutes between 10 o’clock and 12 o’clock are actually round, and there is a hair – or something – that sticks out from the top of the 12 o’clock marker. Small things, yes, but visible (under zoom) just the same.

This version of the Fairfield (model: TW2P91300ZA) has a grey leather strap that is very similar to the tan leather used on the Weekender Chronograph. Like the strap on the Chrono, this one is thin and feels a little rubbery. It’s comfortable to wear and looks good… for a while.

The tan leather on the Chronograph version showed wear quite early into the review, though the wear never seemed to progress beyond its initial development. This grey strap is the opposite, looking worse every time I wear it. Not only that, but it shows scratches and markings much more visibly compared to other leather I’ve worn. In that respect, you can see why Timex has made a point of advertising how easy its straps are to change. As Melissa said, it’s almost as if the focus of the watch is to sell more straps.

The steel buckle is standard, showing no problems and more or less giving you no reason to give it much thought. 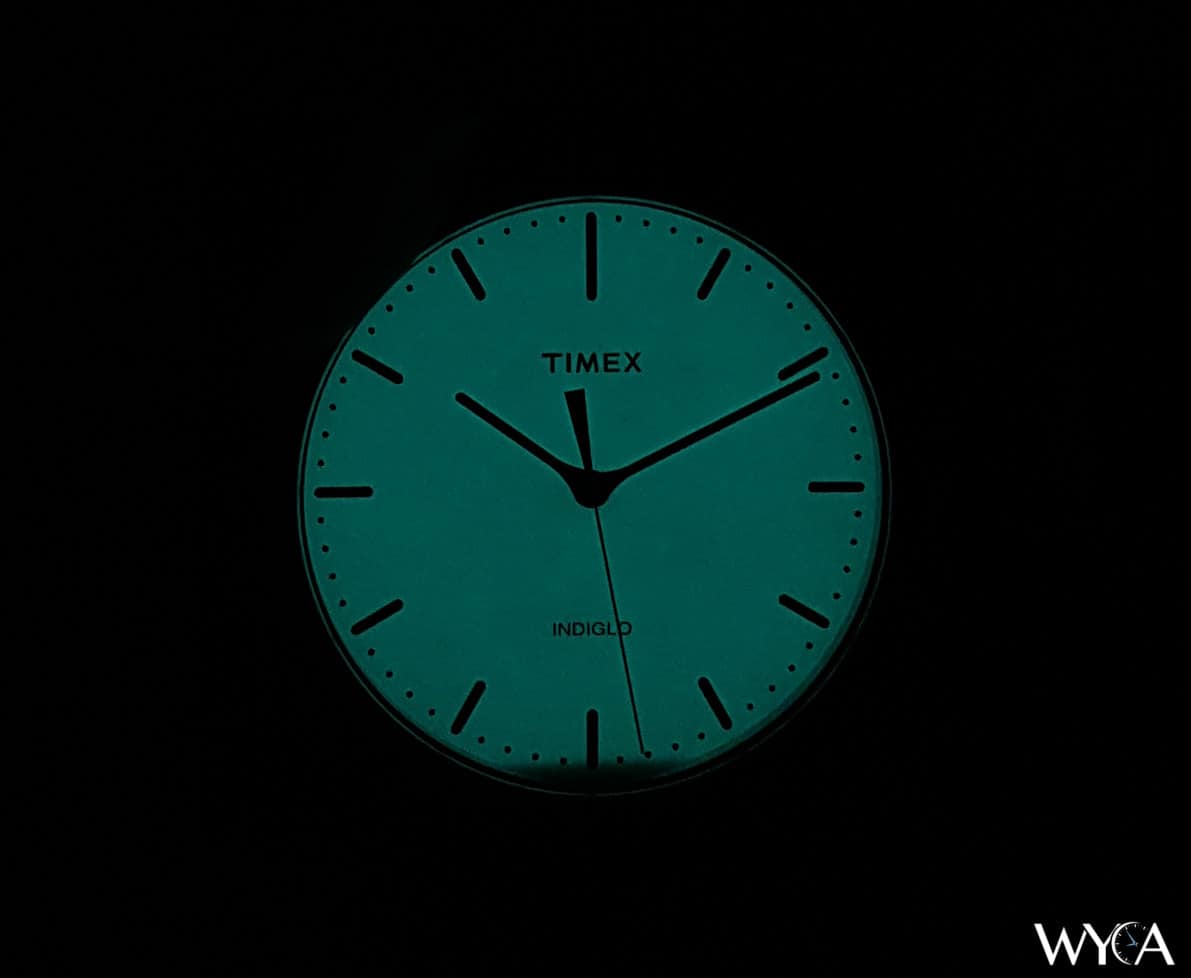 Timex is likely using the same movement found in other non-chronograph Weekenders, assuming the noise it makes is any indication. Yes, the most talked about feature on the Weekender is retained in the Fairfield. I can hear this thing tick no matter where it is on my desk- impressive, considering that it is competing with a desktop PC that has four cooling fans running.

Toolwatch.io showed it accurate to within 1 second per day, which is right about where you’d expect to find a quartz movement.

Because the Fairfield has no complications, setting the watch is as easy as pulling the crown to its second position and turning it. 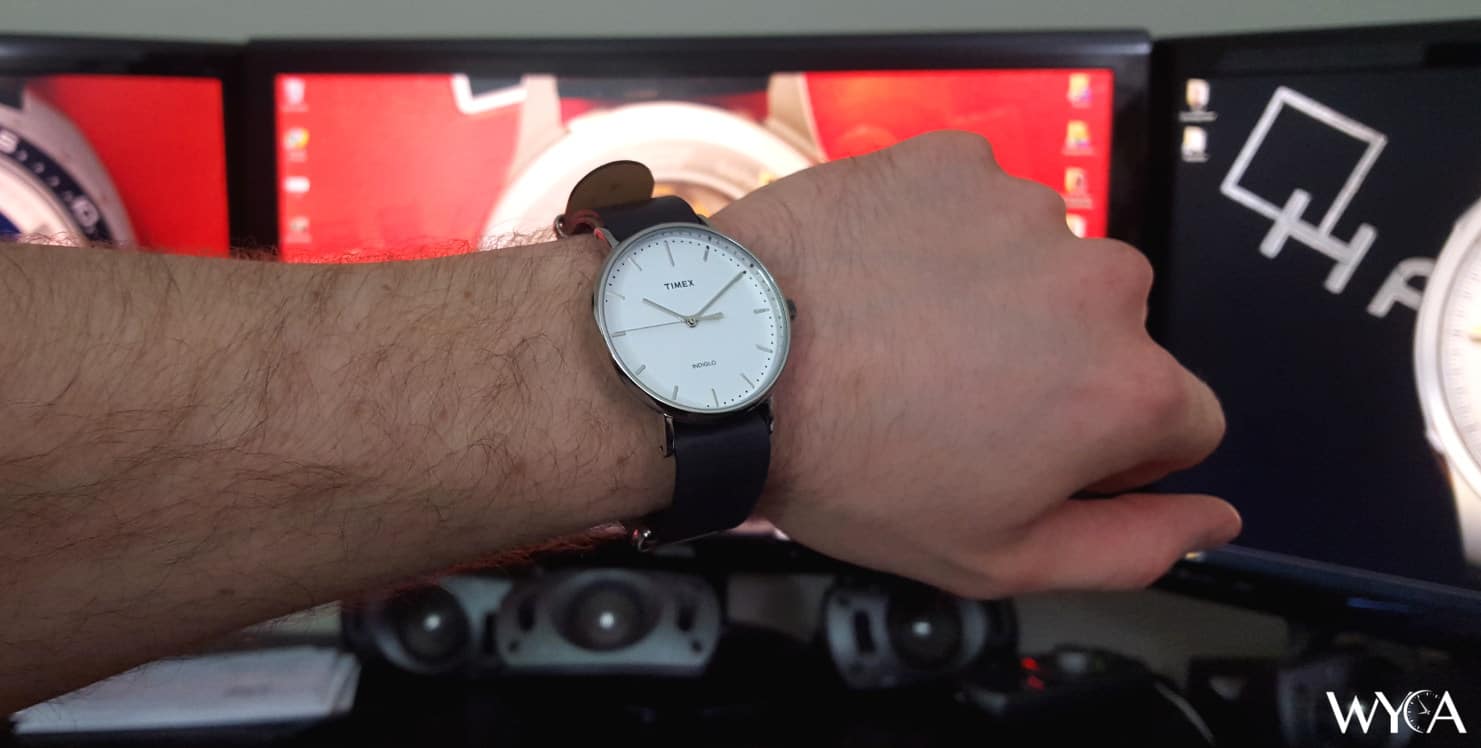 Is the Fairfield an Upmarket Upgrade?

If you appreciate its new look, then the Fairfield is a fine choice. The various versions of the Fairfield average about 50% more expensive than a Weekender 40, though that only puts them  just north of $60. It’s a shame that all you’re really paying for is a case 1mm larger with a higher-end look, but if that’s what you’re wanting in a watch then this Timex is a suitable choice.

This is about as basic as timekeeping gets. The battery will last a long time, its nighttime visibility is brilliant (thanks to Timex’s Indiglo), and changing out the strap is a twenty second process. If you’re wanting a watch to match your wardrobe, and I mean all of it, all you’ll need is a Fairfield and a couple of extra straps.

Being objective, looks and my preferences don’t dictate what a good watch is. Aside from a strap that already looks a little worn, the Fairfield is objectively a good watch: it’s inexpensive, built well, and provides plenty of wardrobe versatility. I bet Timex is going to sell a bazillion of these.