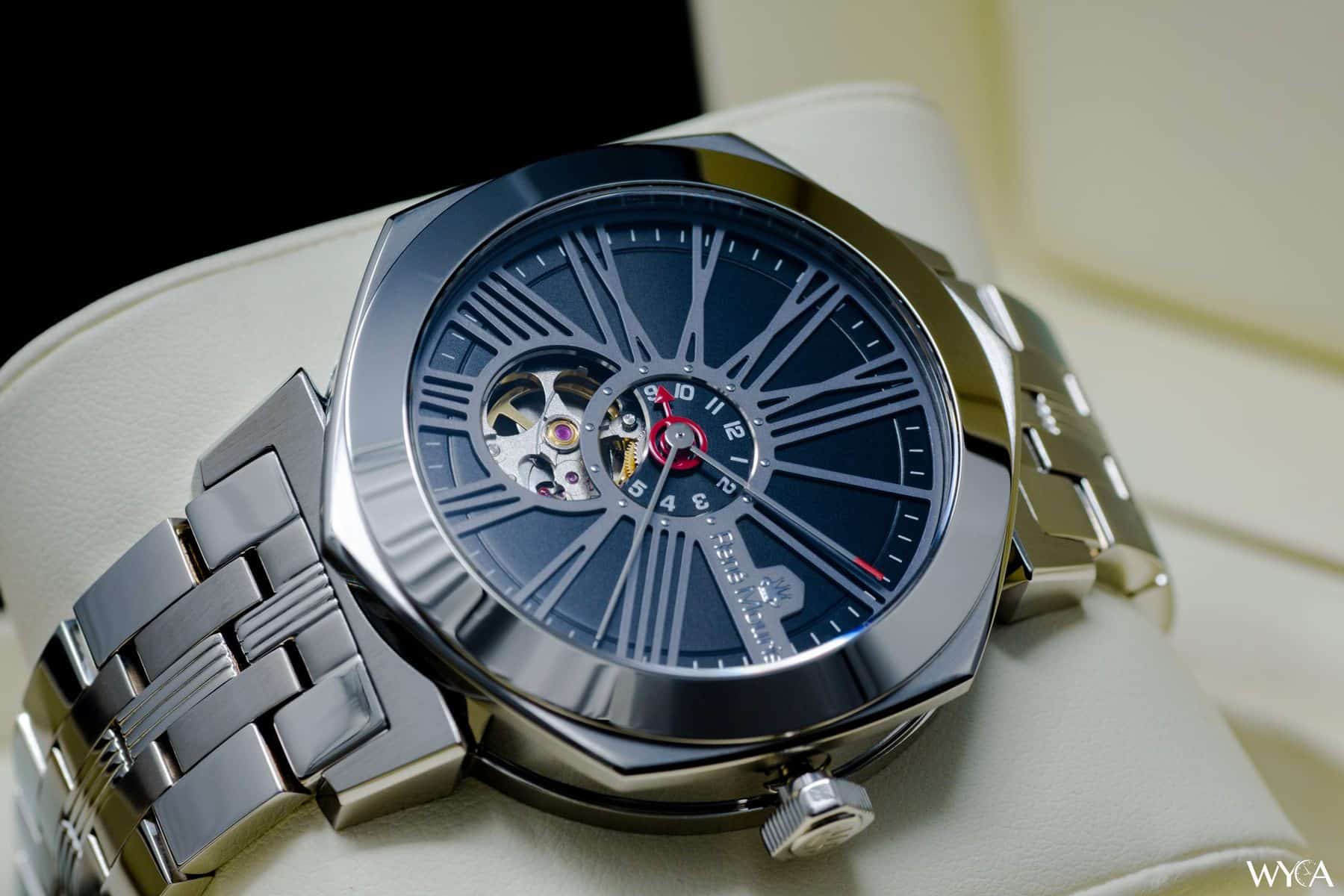 A statement watch that’s discreet about it.

Words/Photography: Me. René Mouris supplied this Mythique at no-cost for the purpose of this review.

On a recent podcast, I got to have a candid conversation about the state of watches today. One topic that came up was how the traditional “mainstream” watch brands – the ones that rely on retailers to support their brands and drive sales – are in trouble.

Microbrand watches and the accessibility of increasingly high-quality ODM manufacturers have put into question the value proposition of the mainstream “Swiss-made” timepiece. Popular Japanese brands are also feeling the pressure.

The René Mouris Mythique, the latest launch from this late-2000s French microbrand, is an example of this threat.

With premium materials, a basic-spec Miyota automatic, and bold wrist presence, the Mythique is more than just a pretty face – it’s a statement.

The Mythique comes in eight colorways, including a very attractive steel, gold, and leather combination (the 70107RM3) and a brown leather, black, and gold combination (70107RM4).

The model I have here, a black on steel model, the 70108RM2, is certainly the most muted of the Mythique line-up, but it’s far from boring, coming with a hefty steel bracelet and a butterfly clasp. Let’s take a closer look. 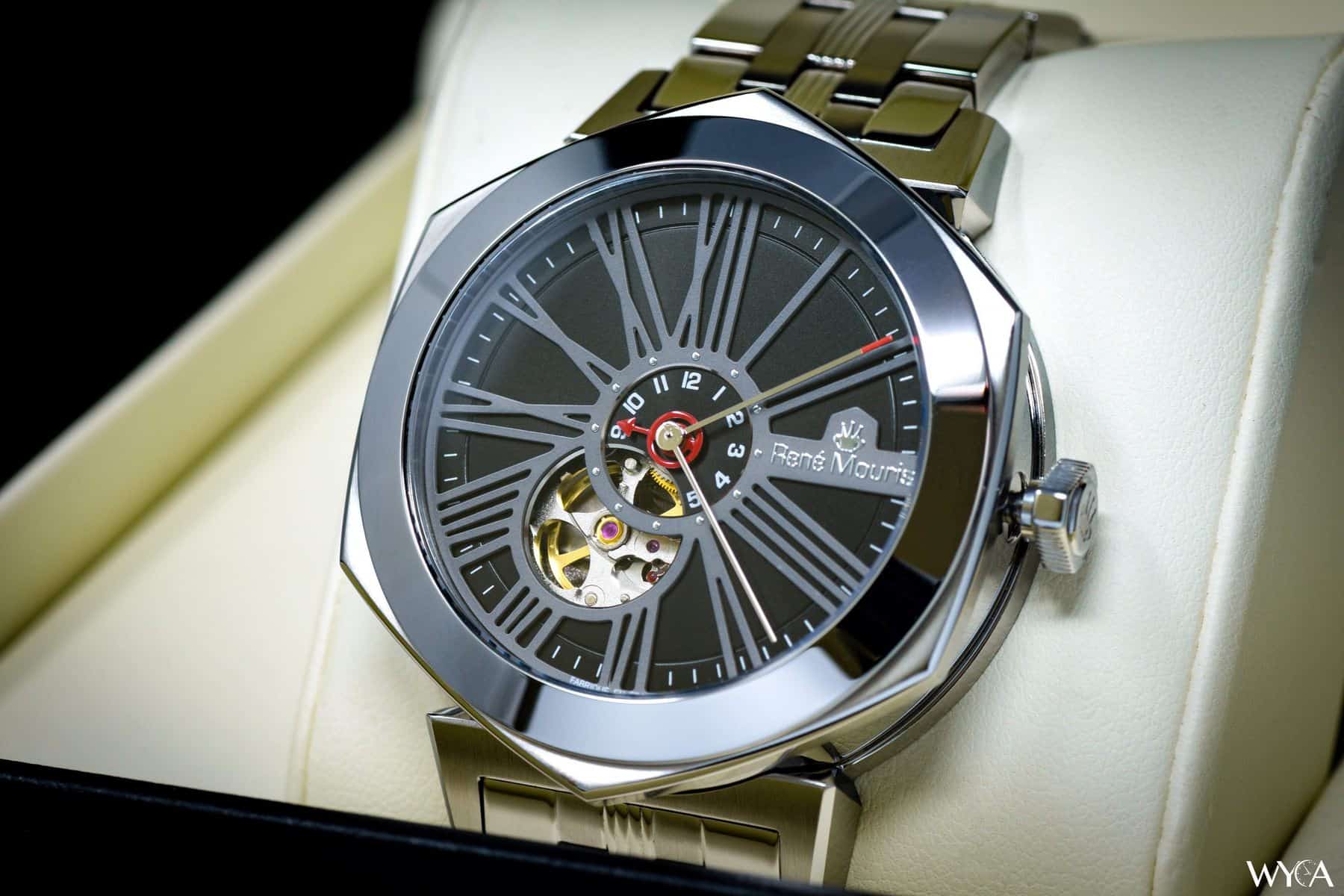 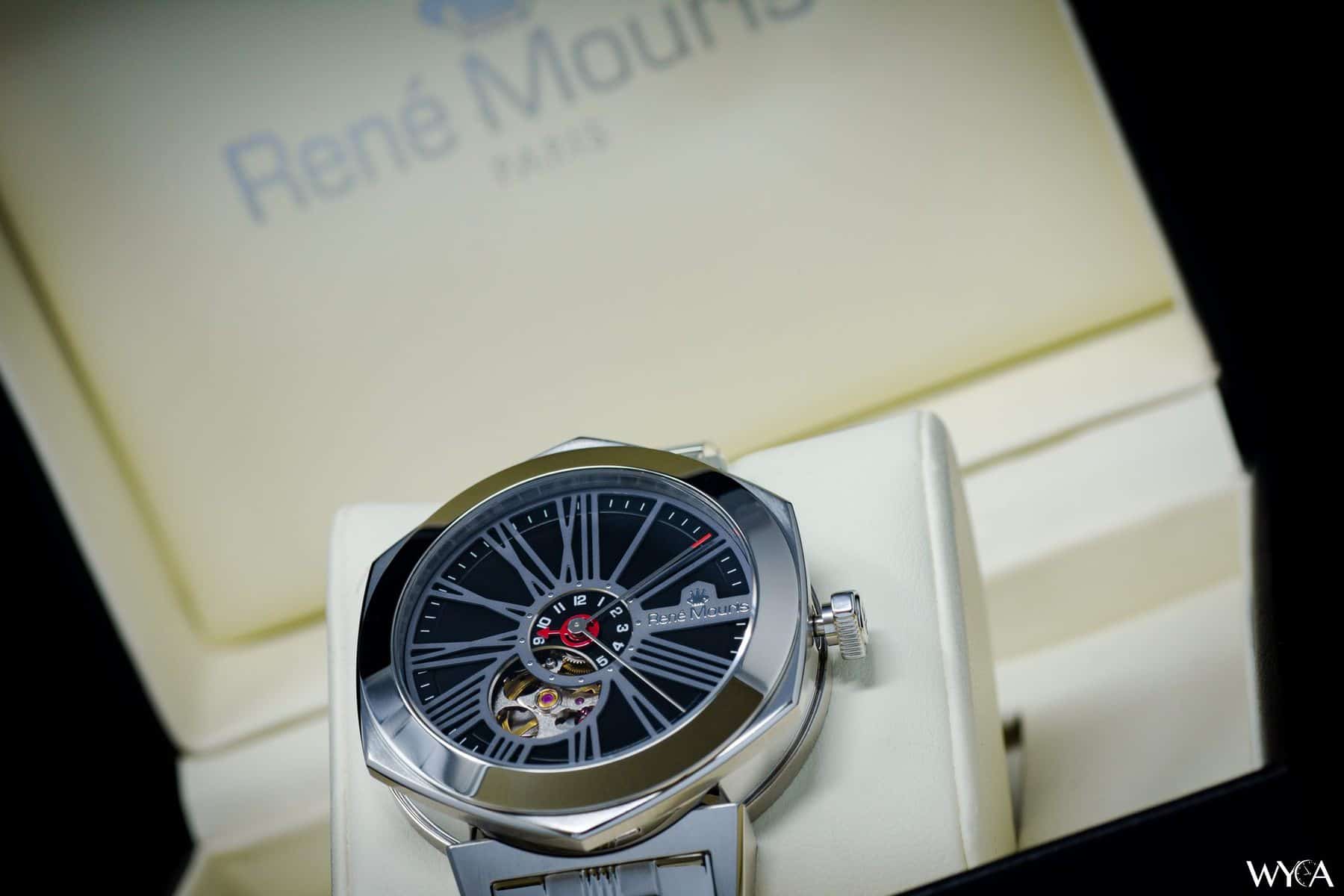 Who is René Mouris?

René Mouris the brand formally came to be in 2007. It’s namesake, founder and lead designer Mr. René Javier Mouris, has a history in watchmaking, working in the industry in the 1960s and casually penning his own designs since at least 1975.

René Mouris fancies themselves a brand focused on classic and timeless designs and seeks a chic, upscale mood when they showcase their timepieces. Have a look at the Mythique demo video below:

René Mouris has released nearly 20 collections for men and women, including two his and hers watch sets, most of which use quartz movements (though they have six automatic collections).

Collection styles range from reserved to sporty, minimalist to macho – a bit of something for everyone. 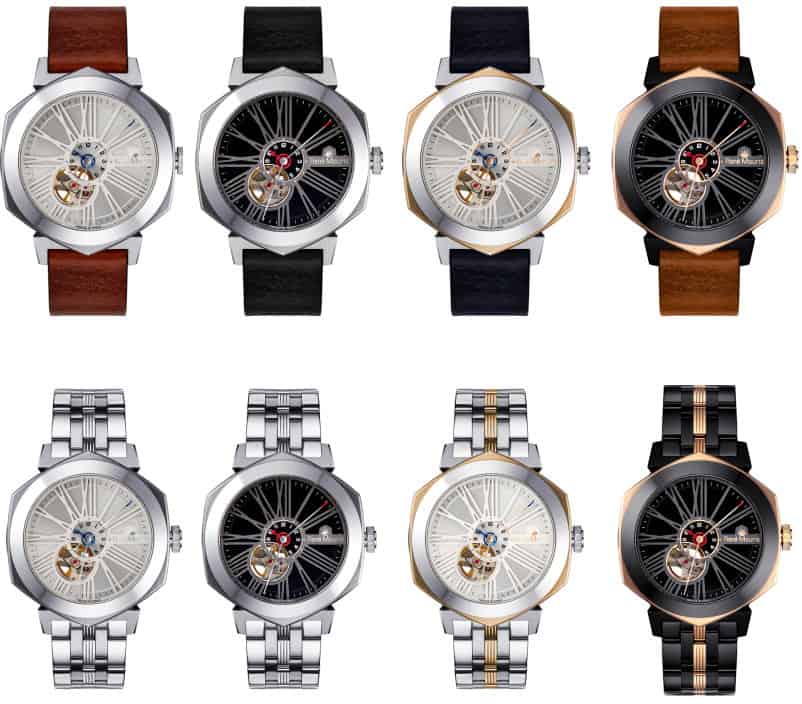 The Mythique collection is penned after contemporary Paris and is a blend between classic elements, such as the Roman numeral indices for the minute hands and Arabic numerals for the hours, and contemporary design choices, such as the open-heart dial and large hexagonal brushed and polished stainless steel case.

My preferred version is easily the brown, black, and gold combination shown in the top-right above, but the steel and black version I have isn’t a visual let-down either. Speaking of which, let’s get on with the review. 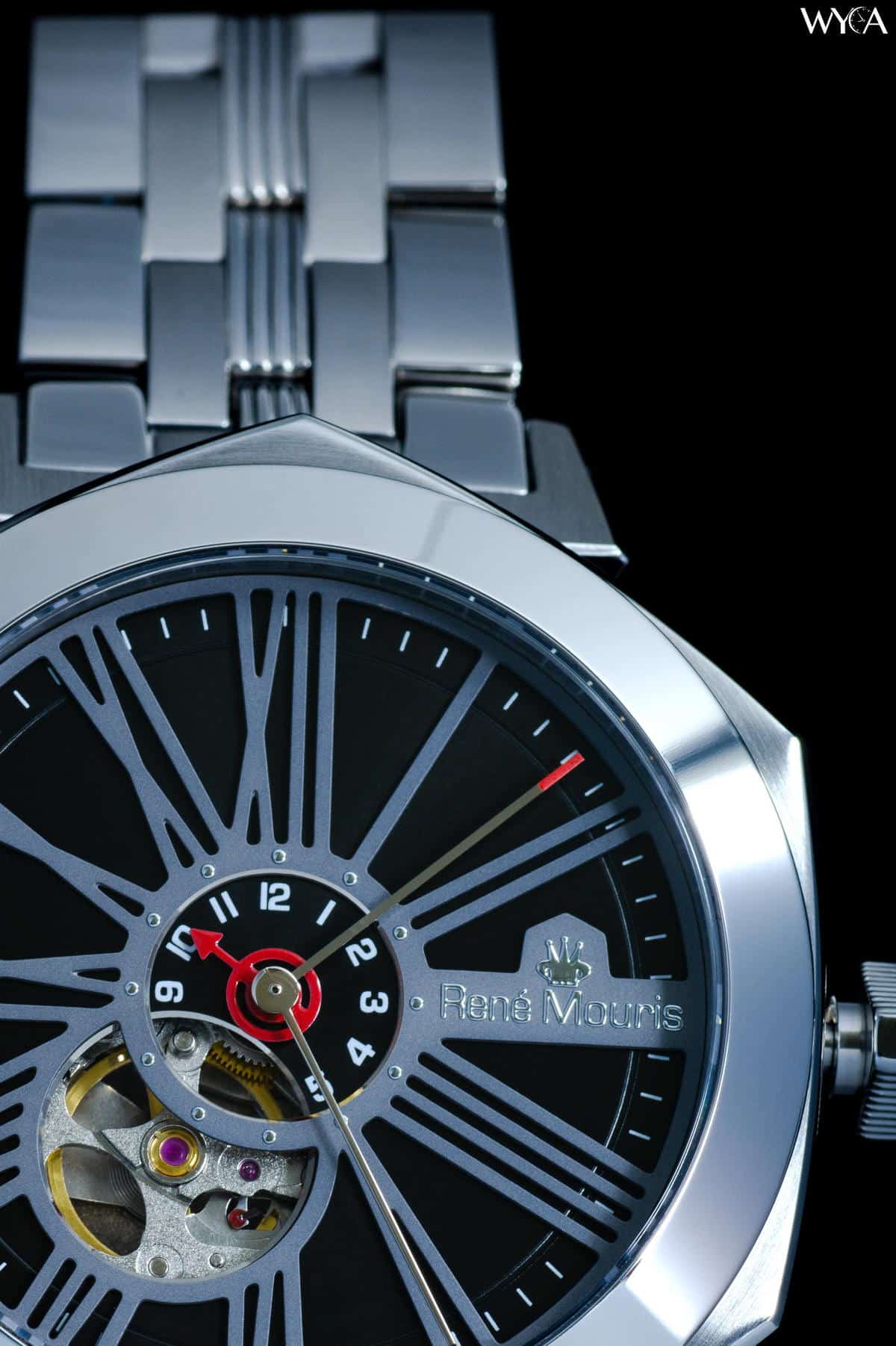 The Mythique is an ode to metropolitan Paris. It is, first and foremost, a fashion-focused watch and you can see emphasis on its design language everywhere you look.

The oversized minute markers dominate the dial, appearing a flat grey from a distance but revealing a subtle texture once you get up close. Connecting the inner and outer rings, the minute markers are noticeably raised from the rest of the dial.

The Roman Numeral and Arabic minute/hour hands, respectively, are examples of design taking priority over function. The minute hands are oversized to the point of being almost ambiguous, and the hour subdial is rendered effectively invisible thanks to its placement directly above the skeleton window.

The bulk of the dial is a flat black/dark charcoal grey (depending on the light), giving the grey Roman numeral minute markers an excellent backdrop for easy contrast. The red-tipped minute hand is finished well, but ergonomically, it tends to get lost in the shuffle. It’s easy to lose sight of, even with the red tip.

The monochrome minute hand suffers from the same fate, but since it is lacking any type of lume or accent, it is actually worse off. The hour hand can be hard to spot, especially between the hours of 5 and 9 where it is positioned over top of the open heart display.

Legibility is a problem all around. 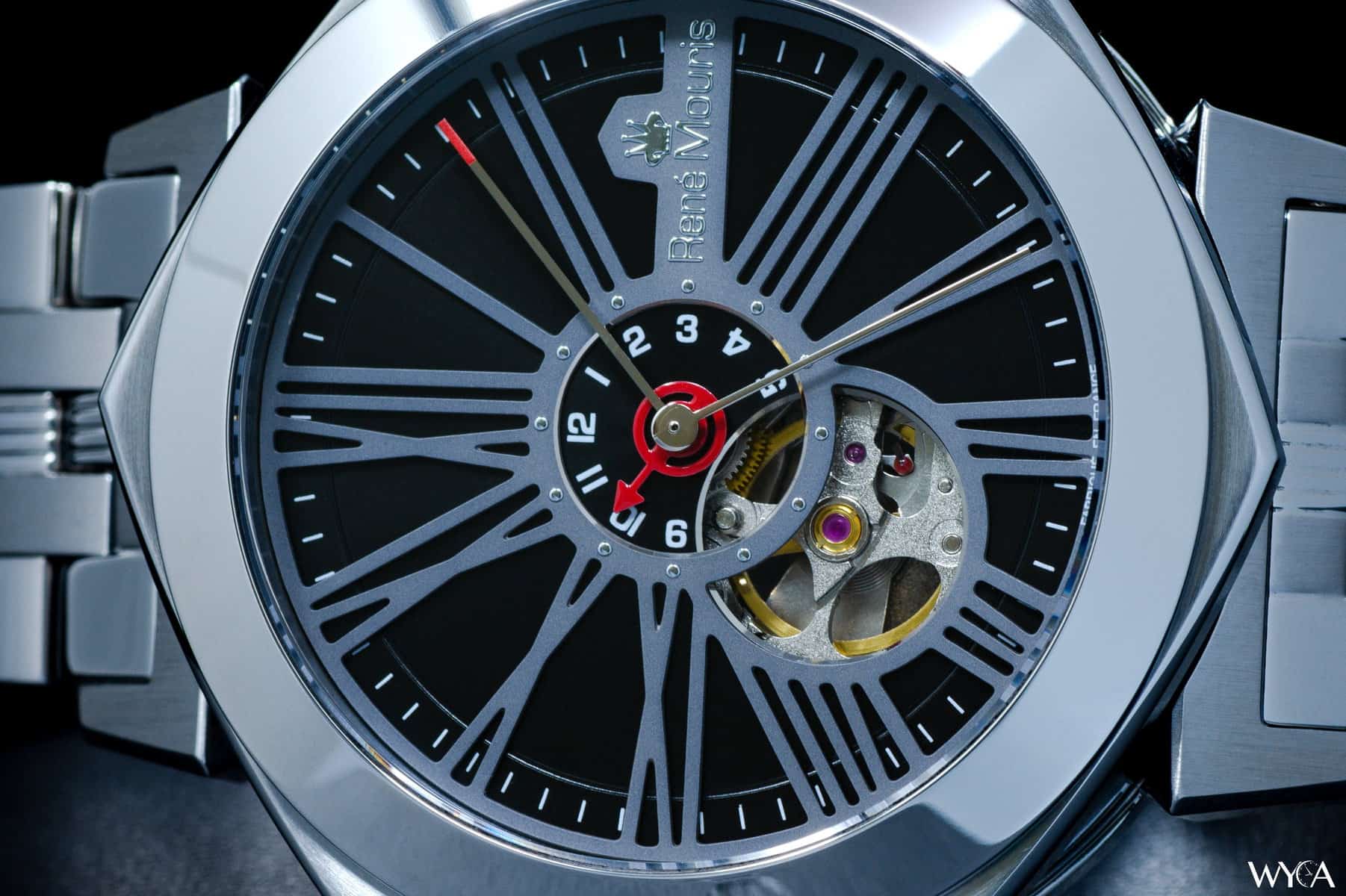 That the hands are so thin and hard to see is a shame, because the watch itself is wonderfully constructed and a joy to look at – especially when aided with a macro lens. In this case, I’ve opted for a 90mm Tamron.

The fill on the hour hand and the tip of the second’s hand are even; to see any blemishes on the minute hands or markers, you have to scrutinize the dial in ways that difficult without the use of a lens of some sort. Importantly, the parts of the watch that play with light all appear to be uniformly finished and polished.

I quite like how the logo has been incorporated on to the dial – it is modest in both sizing and style, letting the skeleton window capture attention but absolutely adding a nice touch to the dial. 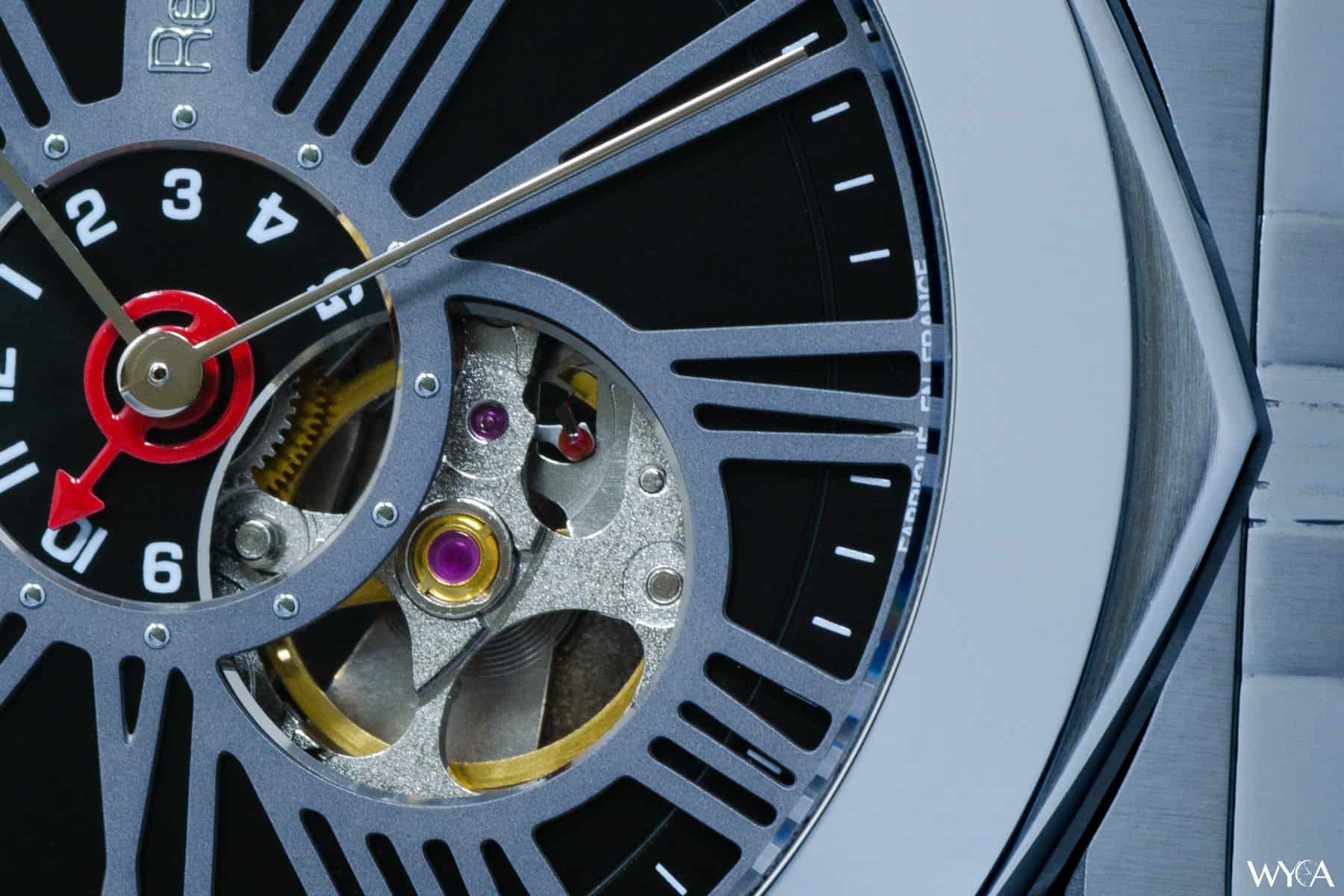 I admit that I found the quality of its finishing both surprising and relieving (more on this below). While not quite at the level of its segment-competitive Swiss peers, such as the Hamilton Jazzmaster Open Heart (MSRP: $995), the finishing is still good and consistent overall. This is also true of the caseback, by the way, where there are no imperfections that I could find.

There are five things in the above photo that I find extremely satisfying:

I love it when watches create moments like the one captured above. It’s all very romantic, and on that basis, I’d call the Mythique an aesthetic win. The dial and hexagonal case come together to create a pleasing facade, albeit at the expense of its effectiveness as a timepiece. 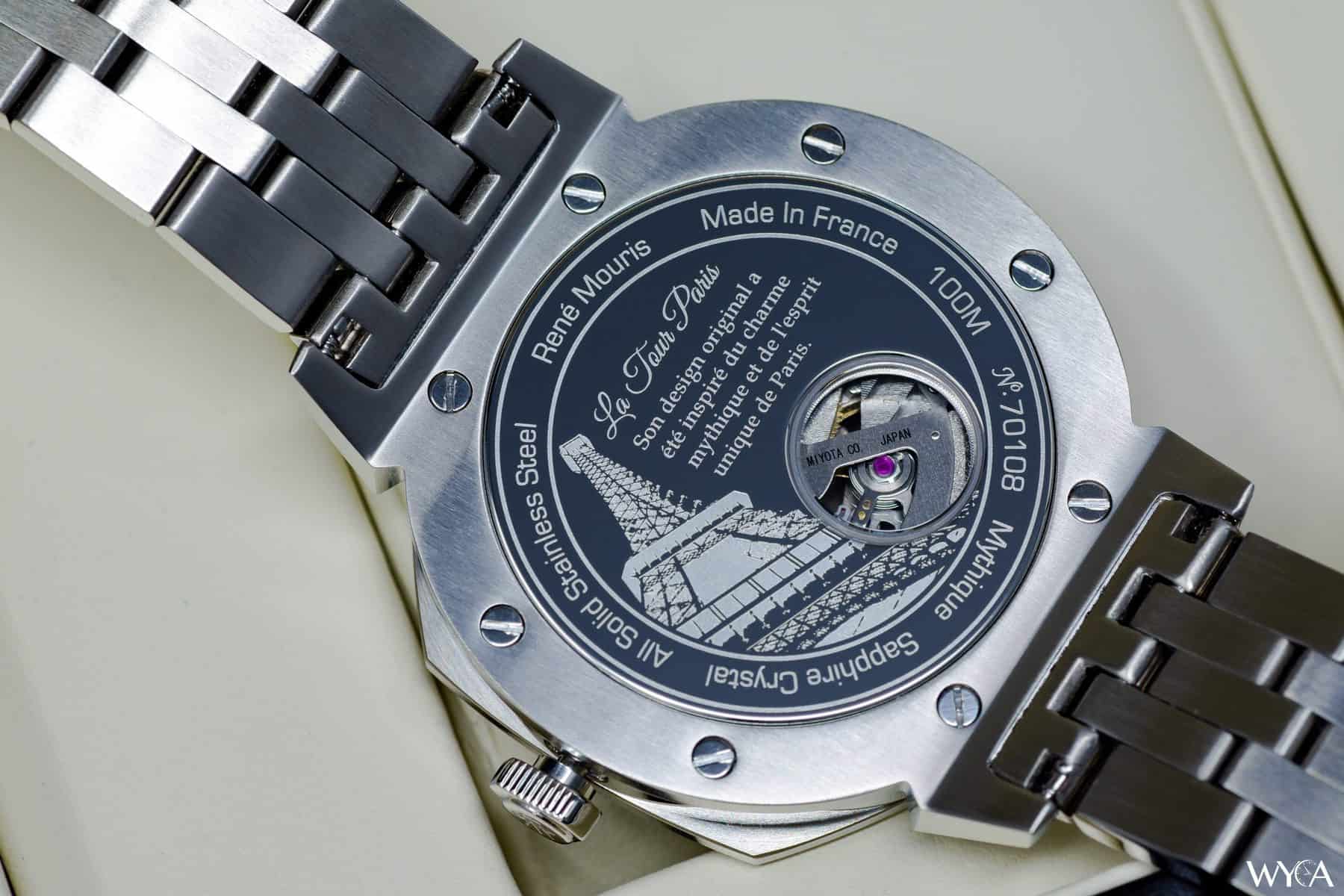 98% of the time, when you look down at your watch, it will be on your wrist. That is why so much attention and careful consideration is paid by conscientious designers to the dial.

Indeed, it is somewhat uncommon for a brand to place much attention in areas that will almost never be seen. To this effect, the Mythique has a finely decorated and gorgeous caseback. On this colorway in particular, the caseback is the star of the show.

One of my first encounters with a watch where the caseback was more interesting than the dial was with the Indonesian microbrand Ianuarius Richie and the Ref. JR100R, which featured an elegant engraving of the Pura Ulun Danu Bratan in its rose gold caseback. Another notable caseback is the one found on the quartz Dan Henry 1970, which showcases a diving-dome donning octopus.

As interesting and memorable as those casebacks are, I must admit that the caseback on the Mythique is my new favorite. 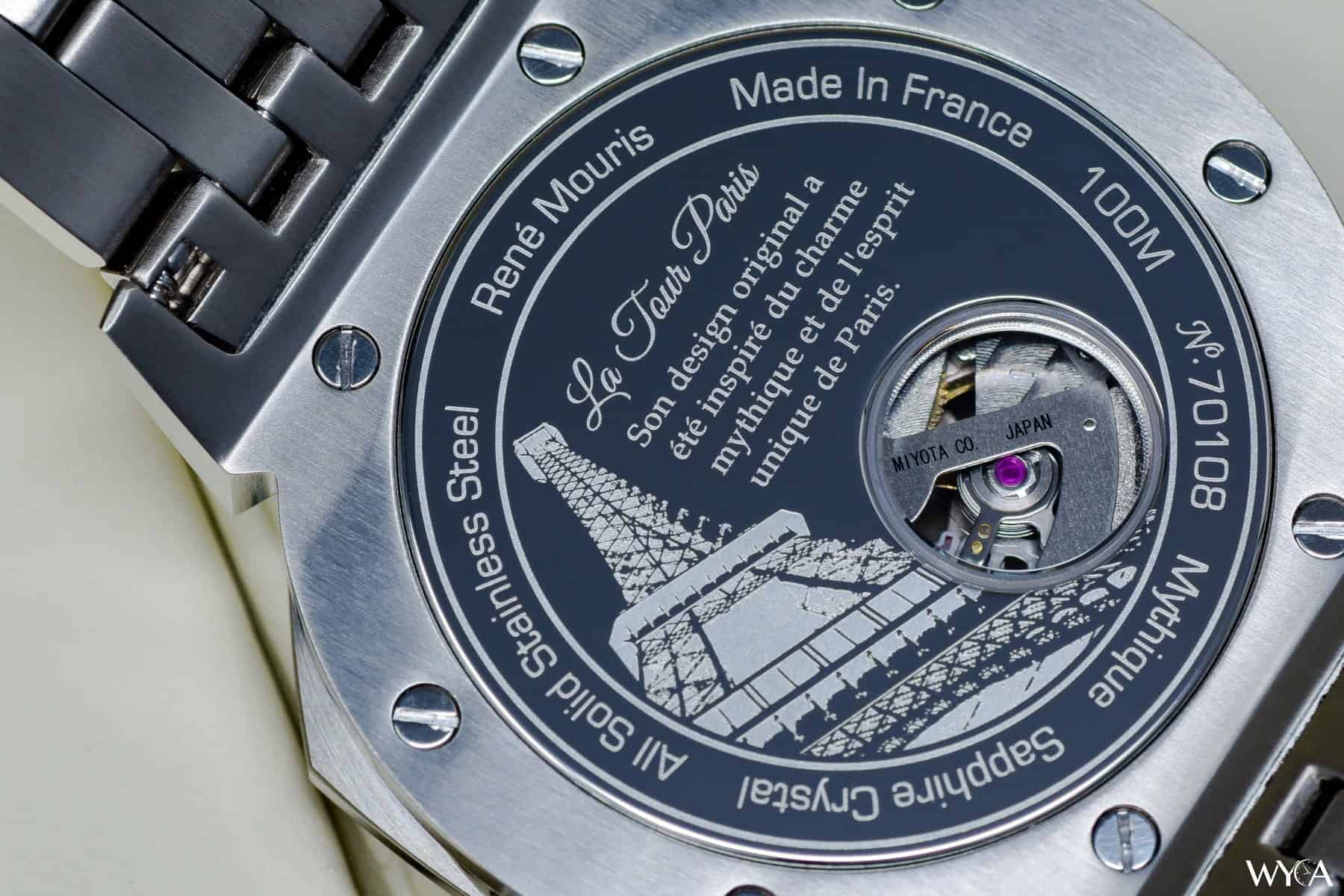 Next to the beautifully-engraved Eiffel Tower are the words “La Tour Paris – Son design original a été inspiré du charme mythique et de l’esprit unique de Paris.”, which in English means something along the lines of The Paris Tower – This original design is inspired by the mythical charm and unique spirit of Paris.

Underneath the inscription is a skeleton window where you can spy the underside of the Miyota 82S0 automatic.

Encircling the dial is the brand livery and some key spec inscriptions. When looking at the caseback at arm’s length, you can’t help but appreciate the strength and personality in its build. And again, as you can see, everything is machined and finished very well. 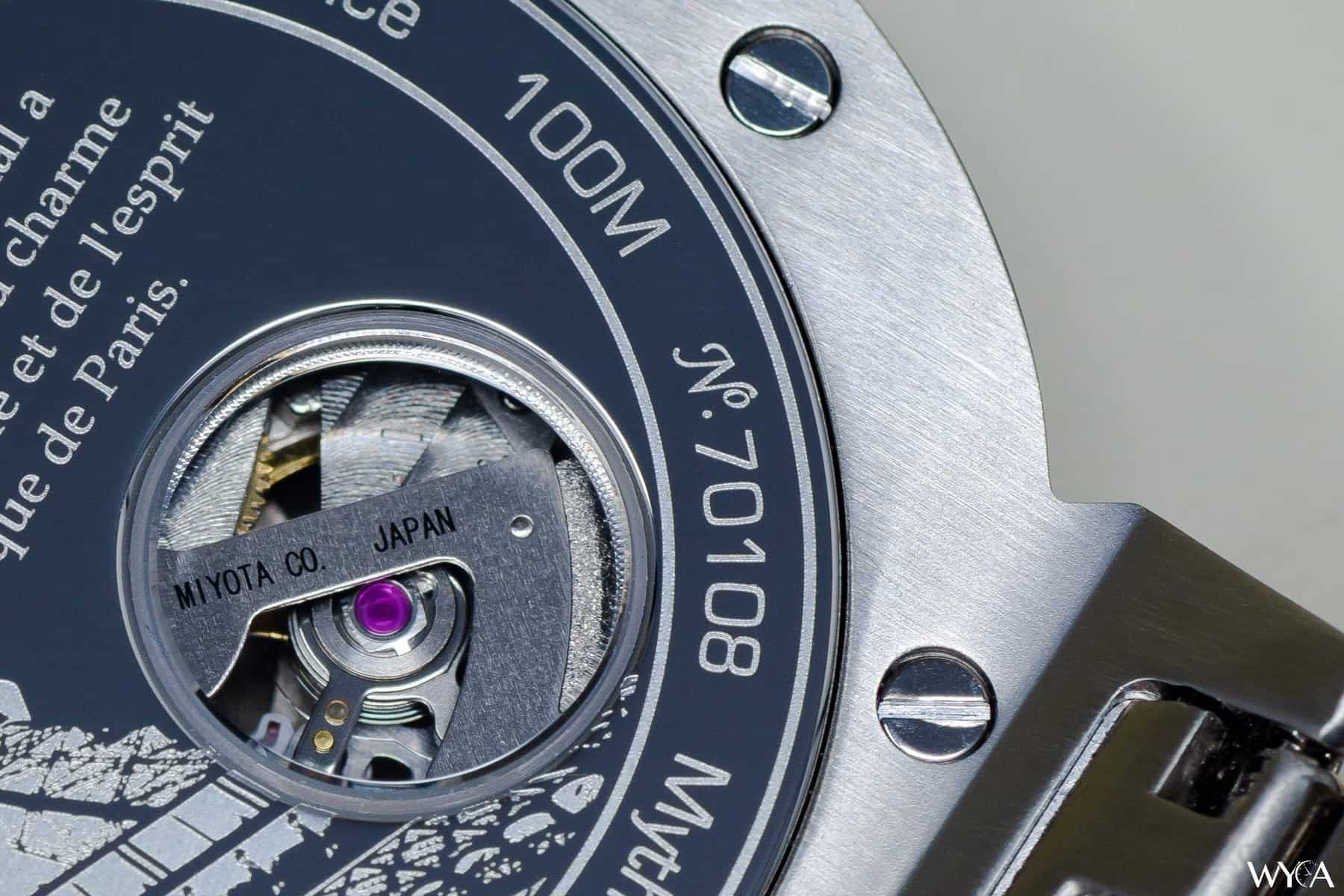 And René Mouris again gives me an excuse to get lost down the rabbit hole of macro watch photography, including the gem of an opportunity for the photo above ;).

Easy to miss at first glance, you can’t help but appreciate how the lower ring of the exhibition window is machined to refract light – fine detailing that you might never notice. While the finishing on the rest of the Japanese-made Miyota 82S0 automatic movement is nothing exceptional, this simple touch nonetheless stands out. I can’t help but love it.

As far as auto’s go, the Miyota 82S0 is a fine workhorse but otherwise unremarkable movement. It has a 42-hour power reserve, a hacking function, and is accurate to -20/+40 seconds per day. Read more on the movement here.

The Mythique has a few things going for it. It’s not very common that I encounter watches that look this good under macro, and it is quite the novelty thanks to its unique case shape.

At €660 (approximately $730 USD as of the time of this writing), the Mythique isn’t exactly a bargain. Sure, it has sapphire top and bottom, and the stainless steel bracelet and butterfly clasp are good quality units, but it also has an entry-level movement under the hood and it lacks the brand equity for it to carry additional value on that basis.

Earlier, I compared the Mythique to the Hamilton Jazzmaster Open Heart because I can get a Jazzmaster off of Amazon right now for $685. Granted, that’s going grey-market vs. OEM, but it still comes with a 2-year Asurion warranty and the convenience of Amazon Prime shipping. And while the Mythique is indeed well made, with good finishing, it loses out ergonomically to the Jazzmaster… and the Jazzmaster is finished better, too.

I concede that the Mythique is a limited-edition series, but I’m also not one to place much value in artifical scarcity. 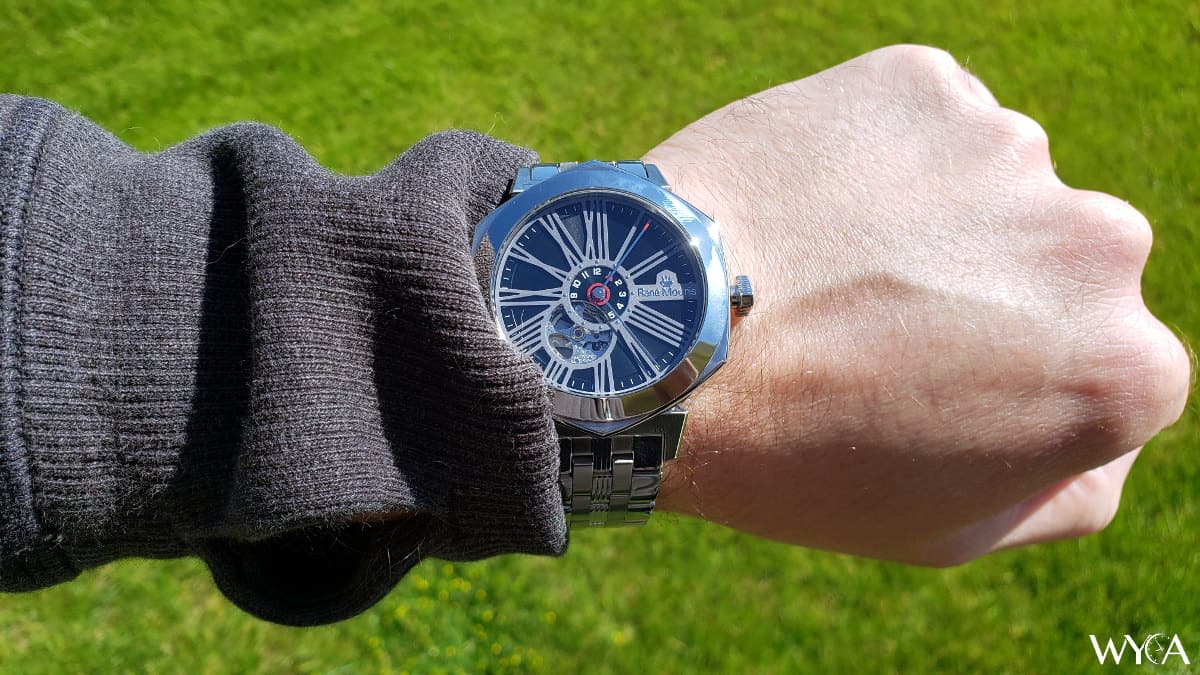 The Mythique is a not-inexpensive watch, and it’s one that comes with stand-out style and a wrist presence that is unlike most of what you’ll find and wear elsewhere. It has certainly garnered its fair share of comments from Zoom call attendees (thanks, 2020).

The hexagonal case and open heart dial are indeed attractive and eye-catching, and the stainless steel bracelet is the best accompaniment to the case, as it downplays the size and weight of the case to a good degree. For a person with small wrists, such as myself, it makes the Mythique easier to wear and appreciate.

René Mouris is asking for good money for the Mythique, and the price is a touch on the high side of fair. You can get some great watches from mainstream Swiss and Japanese watchmakers, as well as a few reputable microbrands, for the same money… and almost all of those will come with superior movements (some significantly so).

But then again, none of the Mythique’s price-competitive peers come with this shape or style, and when you take the view of the Mythique as a fashion watch, there’s no denying that it’s a very good one.

In fact, it might be the best fashion watch I’ve ever worn.