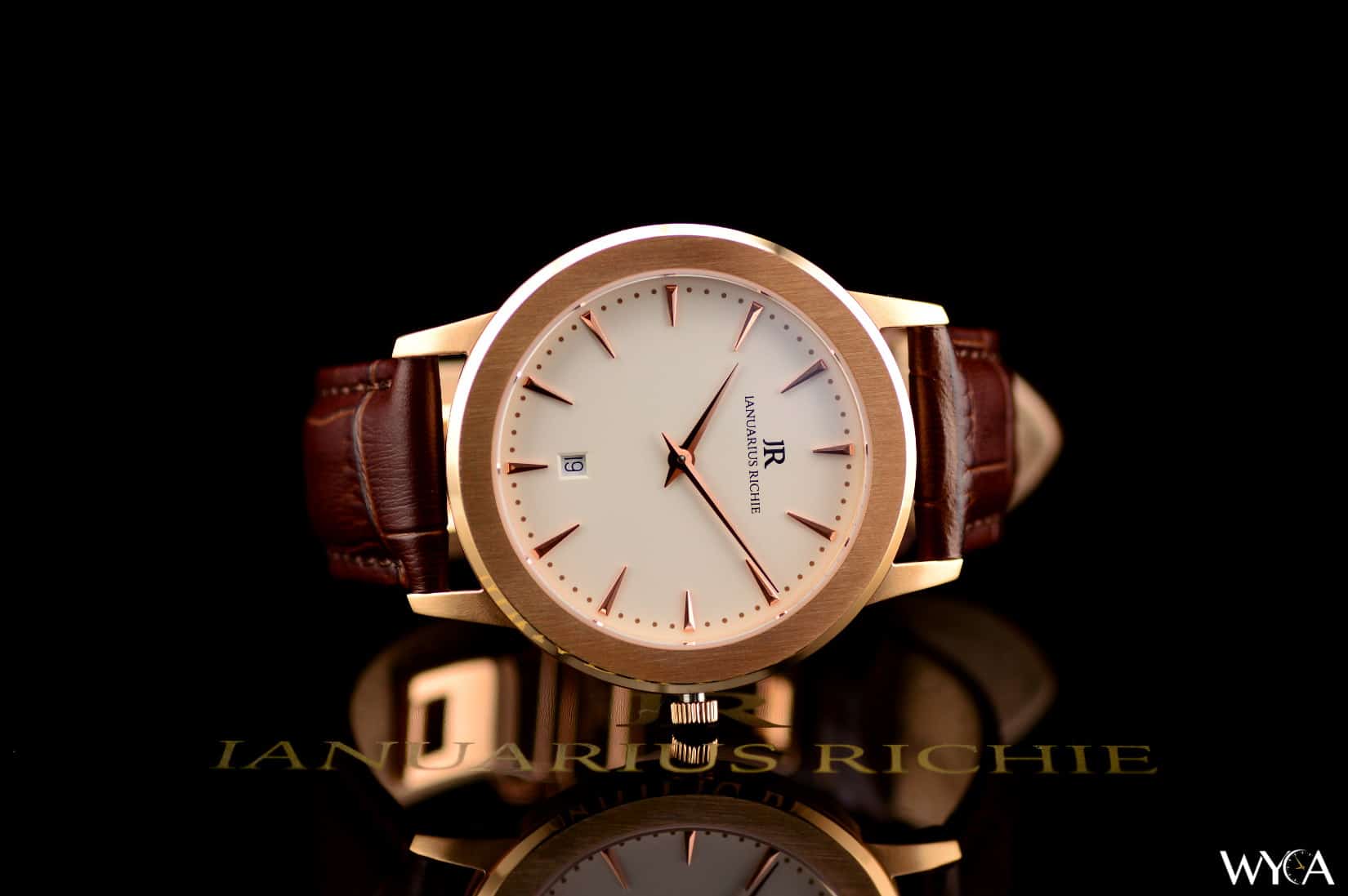 Ianuarius Richie is a Micro Watch Brand, and the Ref. JR001R Is Their Latest Model.

A few weeks ago Ianuarius Richie sent over a brand new Ref. JR001R for me to review. I was unaware of the brand but impressed by their presentation. Their website, crowdfuding campaign, and media were all on-point; whoever manages their branding and media has done an excellent job.

Priced at $345 and made of higher end stuff, the Ref. JR001R is a quartz timepiece that looks ultra luxe thanks to ample use of rose gold and ceramic ivory. It also appears to be strikingly similar to Corniche’s Heritage 40. Is it as good? Let’s find out. 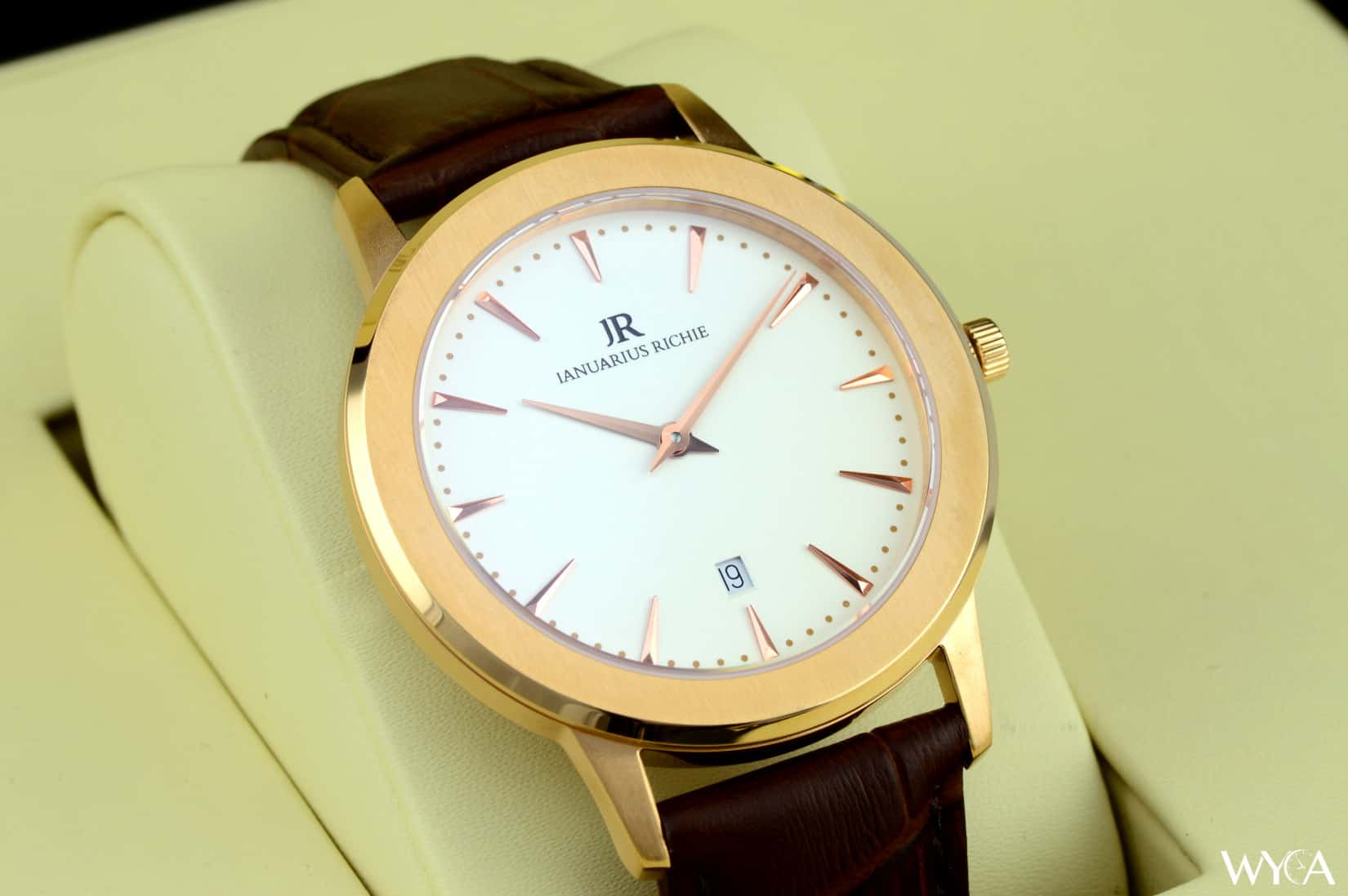 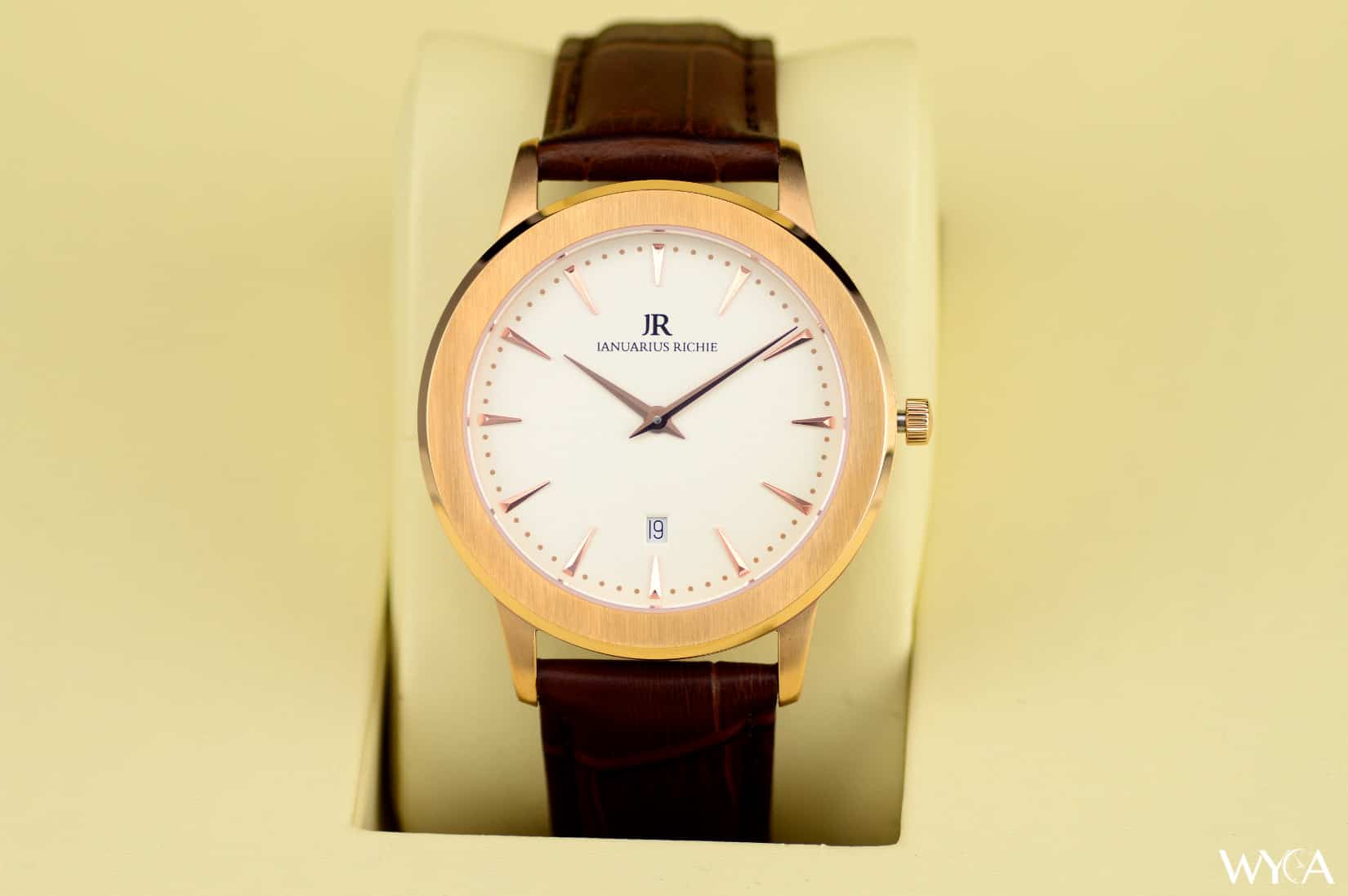 The presentation of the watch when you first open the box is excellent.  The box is premium feeling, sporting a piano black exterior with gold finishing and hardware. It’s clear that thought was placed into making its first impression a luxurious one.

The watch itself is quite striking. Ianuarius Richie has gone a more traditional route with the Ref. JR001R’s styling, blending rose gold into the ivory white dial via tapered hour markers and dauphine hands. Mated to the dial is a rose gold case, which is brushed on the top and sides with a finely polished ring along the bezel. The entire ensemble is paired with a brown crocodile-grain leather strap and rose gold deployment clasp.

The dial is clean overall and is well styled. Prominently displayed are the founders initials, JR, above the brand name. It’s a personal touch to something that they clearly poured a lot of time into. The hands refract light based on the angle: the more direct the light, the darker they appear to be- this is due to how they are tapered. Like the hour markers, the hands are done in rose gold.

The single complication – a date display at 6 o’clock – takes away from the polish somewhat, if only because its white date wheel doesn’t match the ivory of the dial. A minor detail that you won’t notice unless you’re staring at it intently. 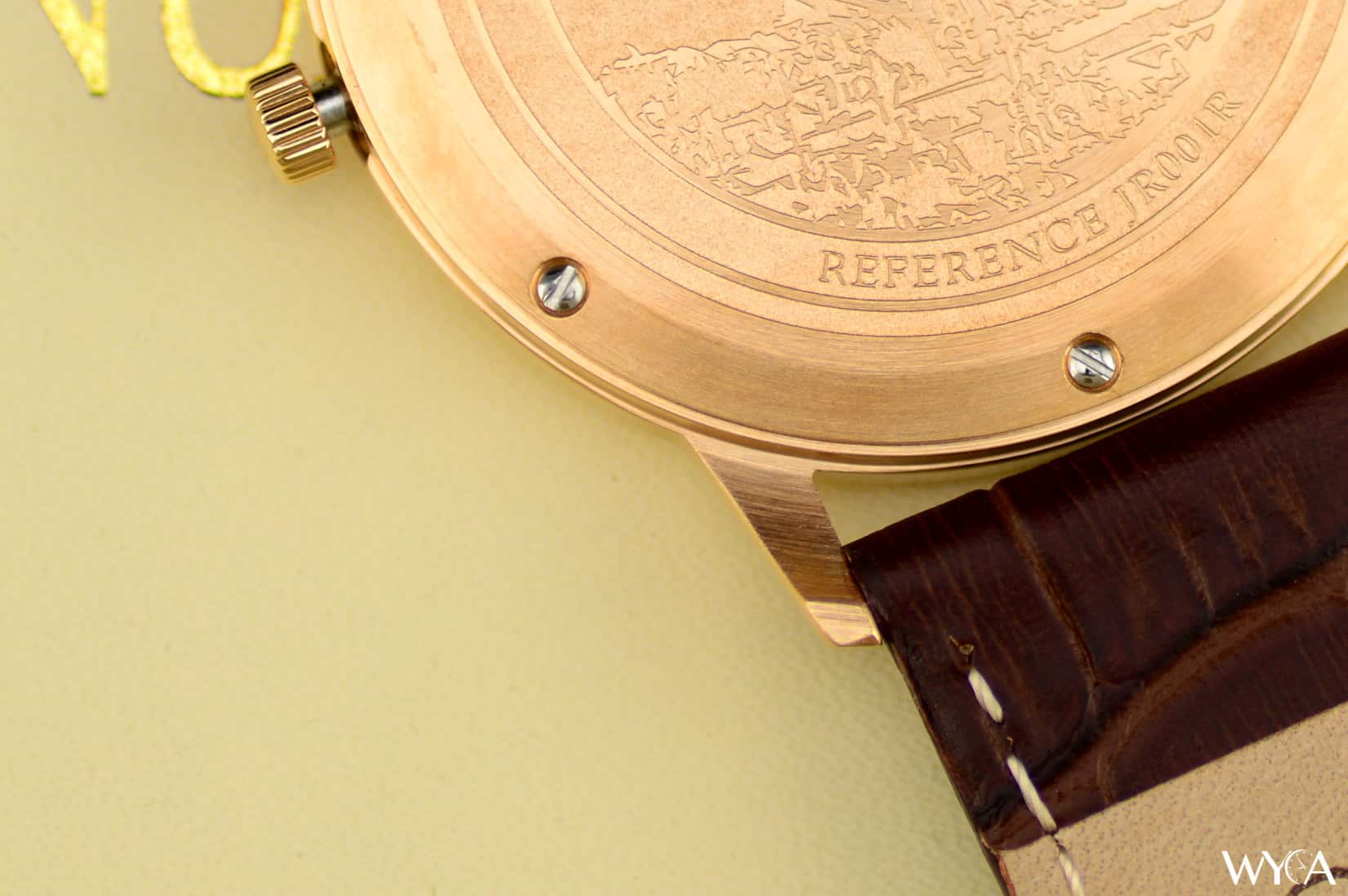 The Caseback is Engraved With an Homage to the Pura Ulun Danu Bratan, a Shaivite & Water Temple in Bali, Indonesia.

The caseback is interesting as well, and again draws comparison to the Corniche Heritage 40. In this case, Ianuarius Richie has engraved the caseback with a depiction of the Pura Ulun Danu Bratan (or Pura Bratan), which is a Shaivite/water temple located in Bali. Given the brands Indonesian heritage, this depiction not only makes sense, but brings considerable character to the watch. It feels authentic. It looks great, too.

Finishing details, such as the engraved crown and deployment clasp, are also done with similar quality. The look is polished and well presented; from all angles, the Ref. JR001R looks and feels its $345 price tag. 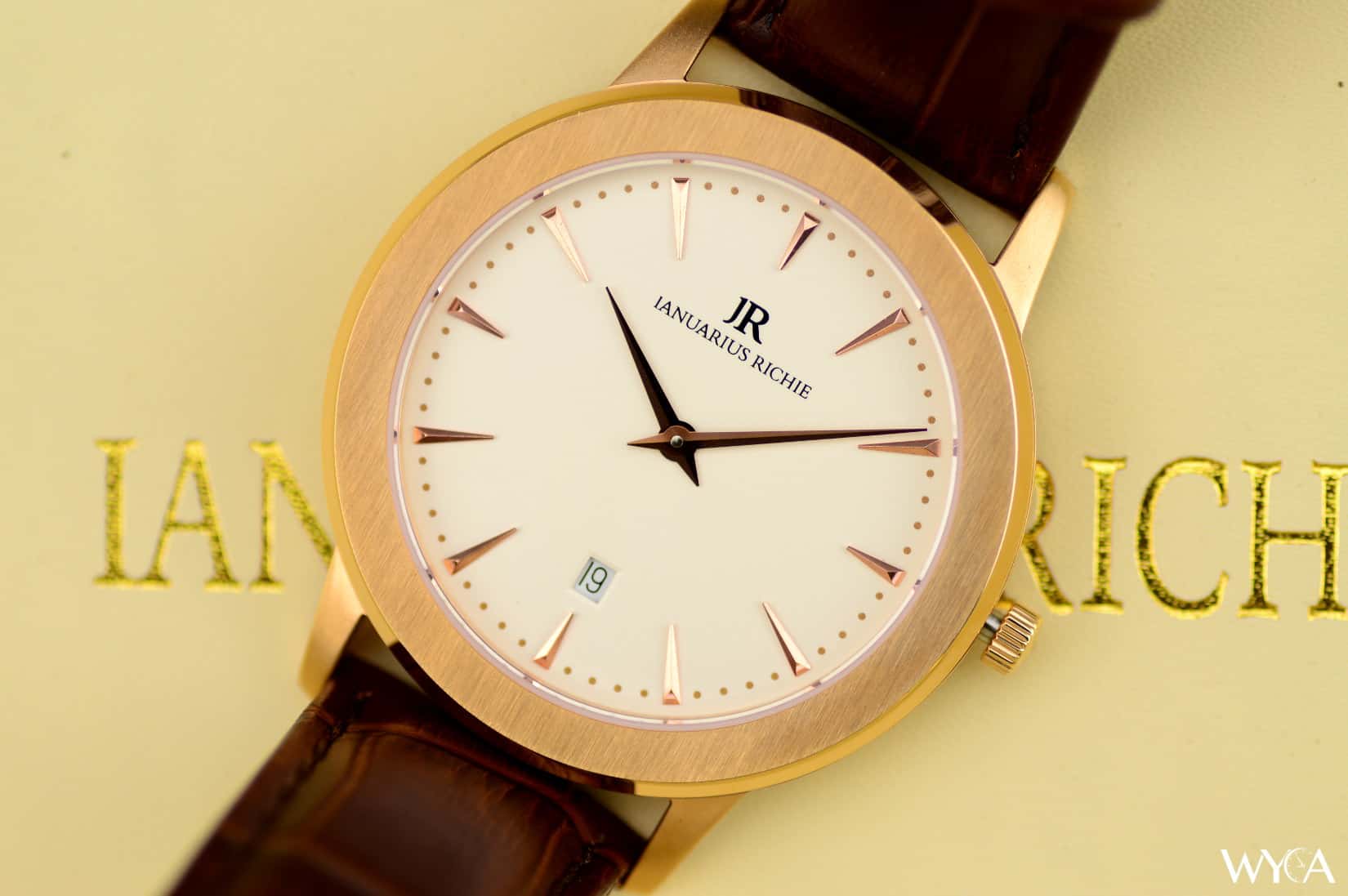 Build quality is where I tend to see microbrands struggle, and the JR001R suffers somewhat here as well. There are no major issues in quality, and the watch itself is well put together, but under zoom I can see defects in the rose gold on the hour markers and hands. These issues are minor – incredibly so – but still present.

The sapphire crystal looks clear, as expected, and is free from defects. Raised just a hair over the surrounding bezel, the crystal is likely to remain free of problems throughout the life of the watch. It’s made of the right material – as would be expected at $345 – and is so close to the case that it’s unlikely to draw any adverse attention. Where a domed crystal, such as the one on the Bambino, is a target, this one is inconspicuous by comparison. 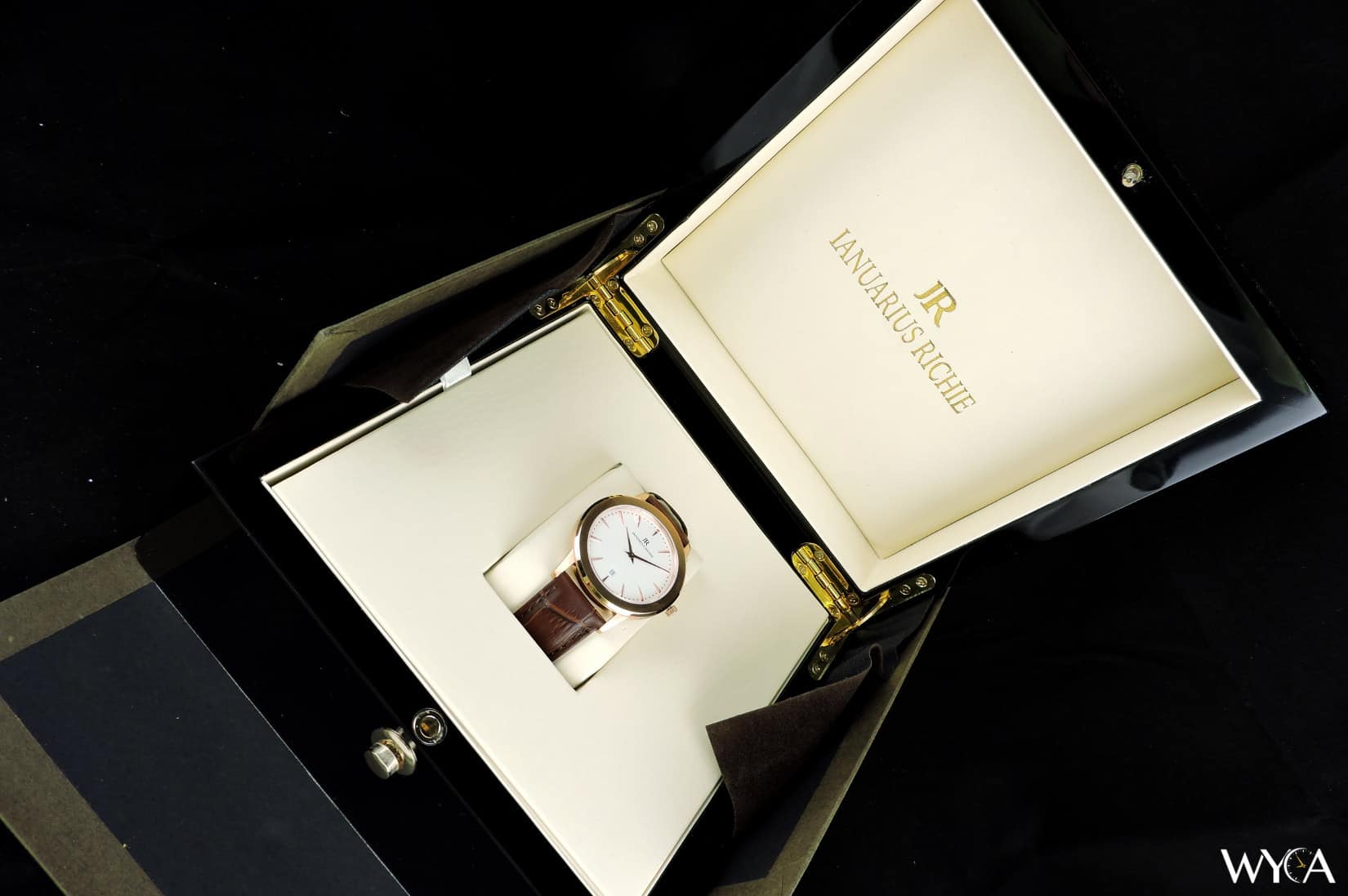 The case, which is prominently a mat finish aside from a highly-polished rose gold ring along the bezel, is also constructed well. Tolerances are good and tight, and there are no defects in the finish or materials as far as I can see.

Finally, the dial itself is finished well but not perfectly. Yes, under 10x zoom you will find minor markings on most of the hour markers, but I want to reiterate just how close that is. To see these “defects” you’ll need the assistance of a $750 camera setup, specially controlled lighting, and a macro lens. It’s also important to note that these issues are by no means isolated to the JR001R- nearly every rose gold watch I’ve ever reviewed has similar markings present on the dial. 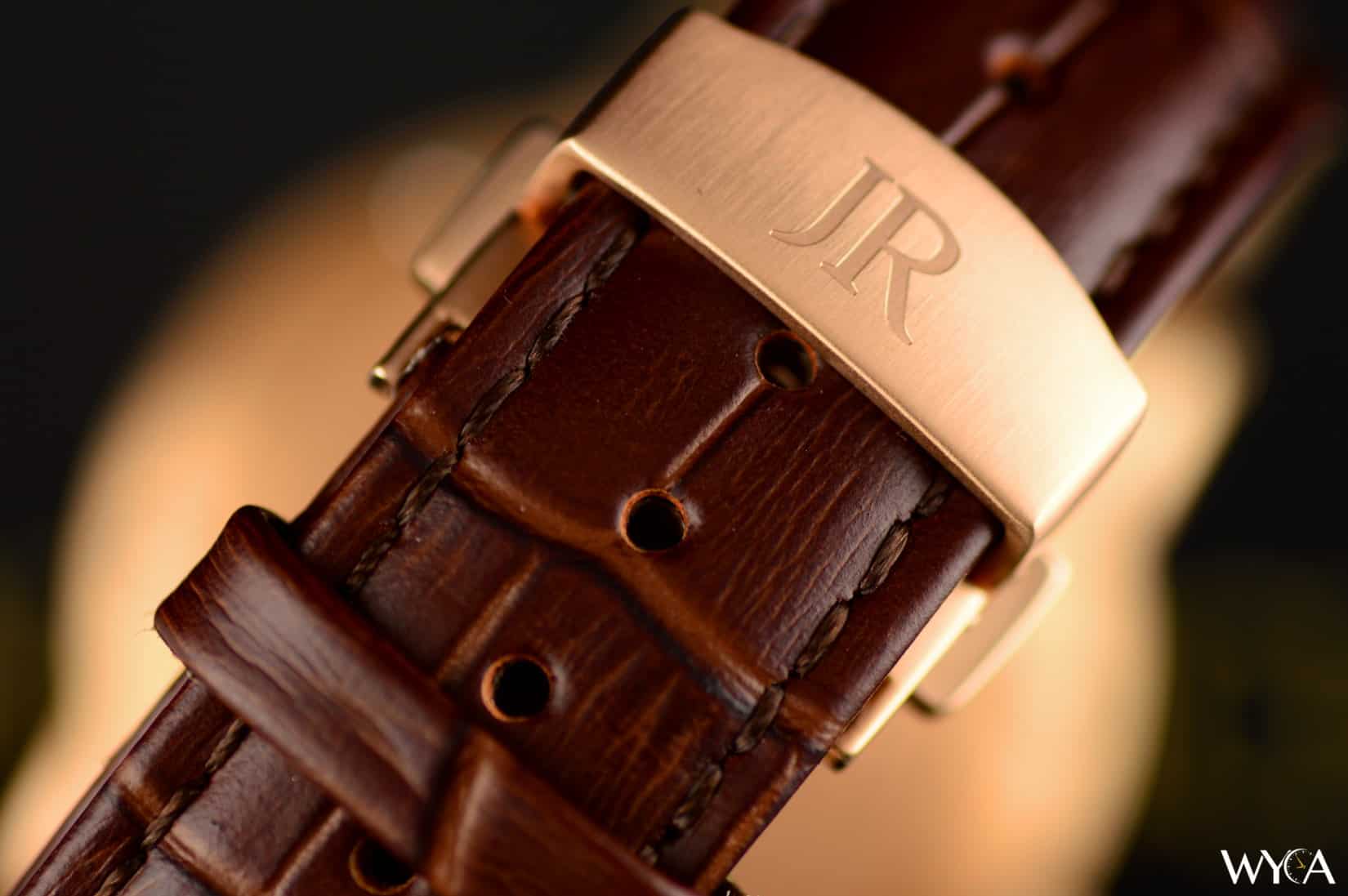 Crocodile-grain leather is a great looking addition, and I’m pleased to find that the strap feels as luxurious as it looks. Many watches use straps with this look, but not all straps are equal. The strap here looks as good as straps found on watches worth hundreds of dollars more, and on the wrist it is soft and comfortable. The watch is shipped wrapped around its leather stand, and because of this, the leather is already broken in by the time you receive the watch.

Being broken in before you first put it on offers a tremendous advantage over watches shipped with their straps flat in that the strap will more easily mold to your wrist. It’s already ingrained with a shape that you’re likely to find comfortable out of the box. The potential downside to this is that the strap may come pre-worn somewhat (mine didn’t).

Finally, the deployment clasp is good but not great. It certainly looks the part, and the finishing on both the rose gold and the engraving are top notch, but its strength leaves a bit to be desired. While cleaning the watch the clasp uncoupled when I was applying some pressure to it. To be fair, it was more pressure than it’s likely to encounter when worn, but it’s one of the only deployment clasps I’ve worn that’s done this. I’d be cognizant, but not worried, about this when out and about. 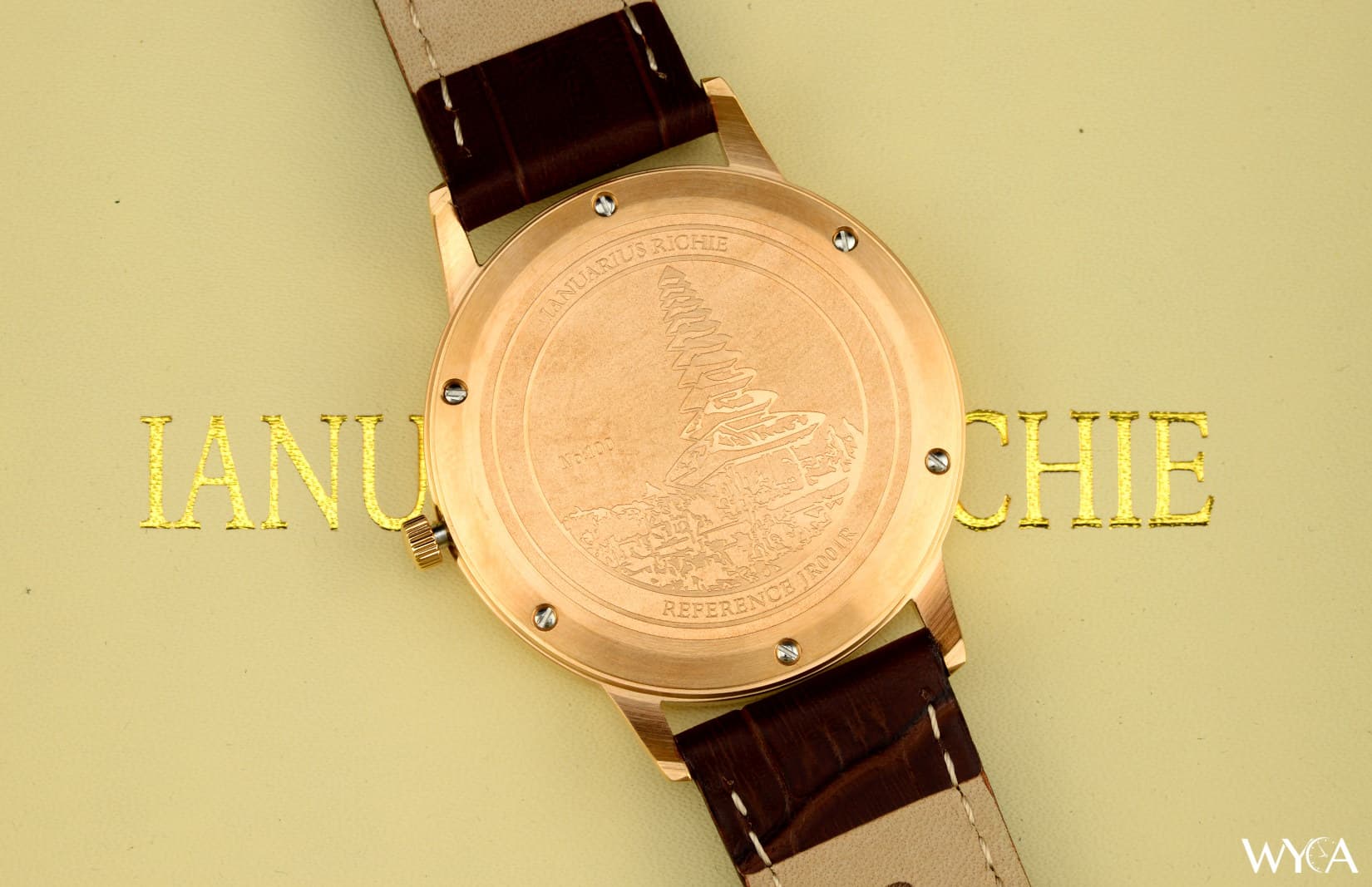 It’s unusual, but not unwelcome, to see a Swiss-made Ronda 704 quartz movement inside the JR001R. For comparison, the Corniche Heritage 40 – which is almost the sister watch to the JR001R – uses a Miyota 2025. Miyota movements are extremely common, especially for use in watches like this. The inclusion of a Ronda movement is interesting.

Toolwatch.io shows the Ronda 704 inside the JR001R to be accurate at +0.7 seconds per day- that works out to be +22 seconds per month. 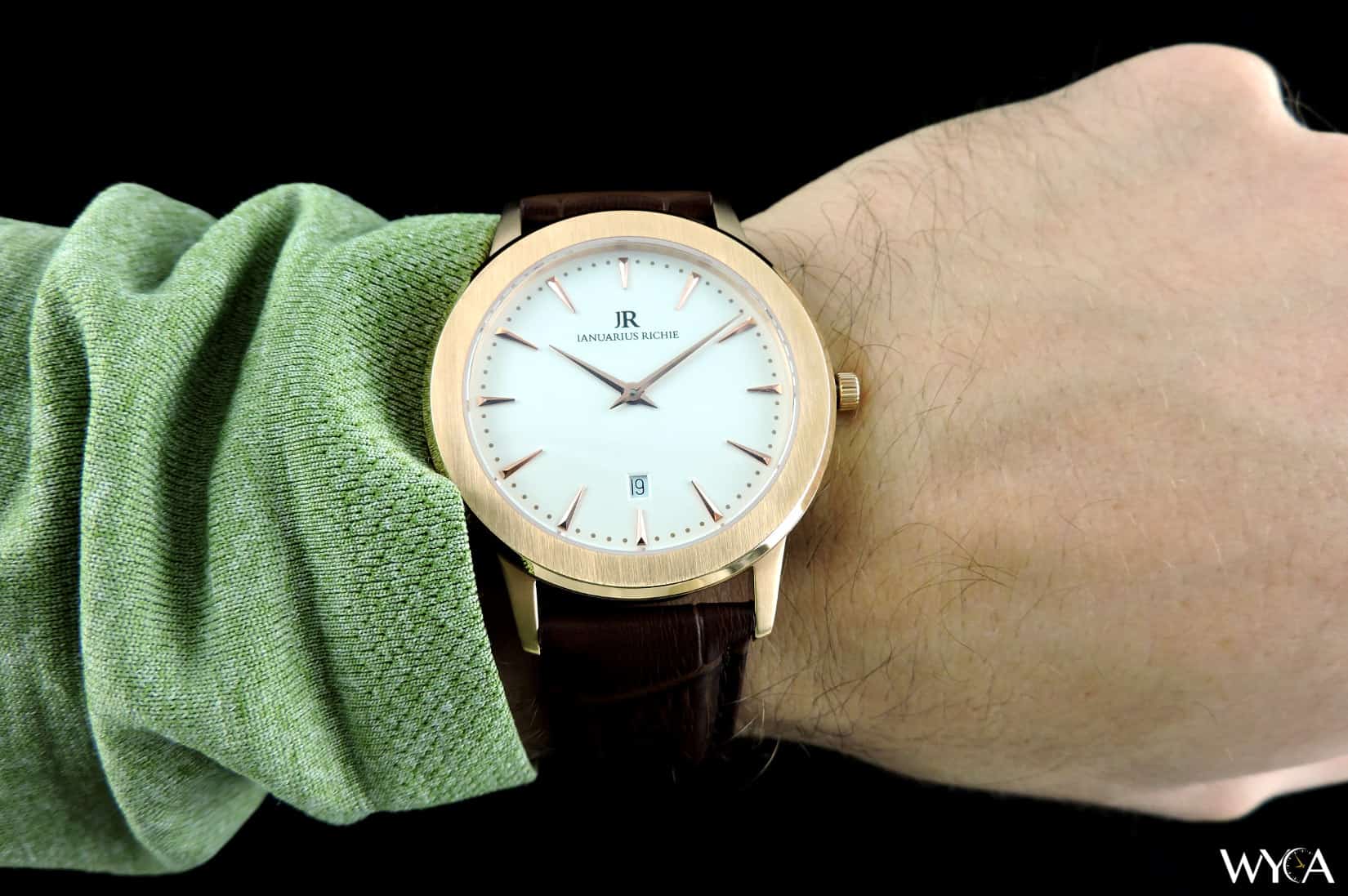 Ianuarius Richie Has Built a Great Looking Two-Handed Dress Watch, But is it Right For You?

There’s a lot about the Ref. JR001R to like. The premium aesthetic and design really shows well, and its simple but timeless styling can easily be worn up or down. If you’re someone that wears a cuff often, the JR001R is a great compliment. It looks fantastic. 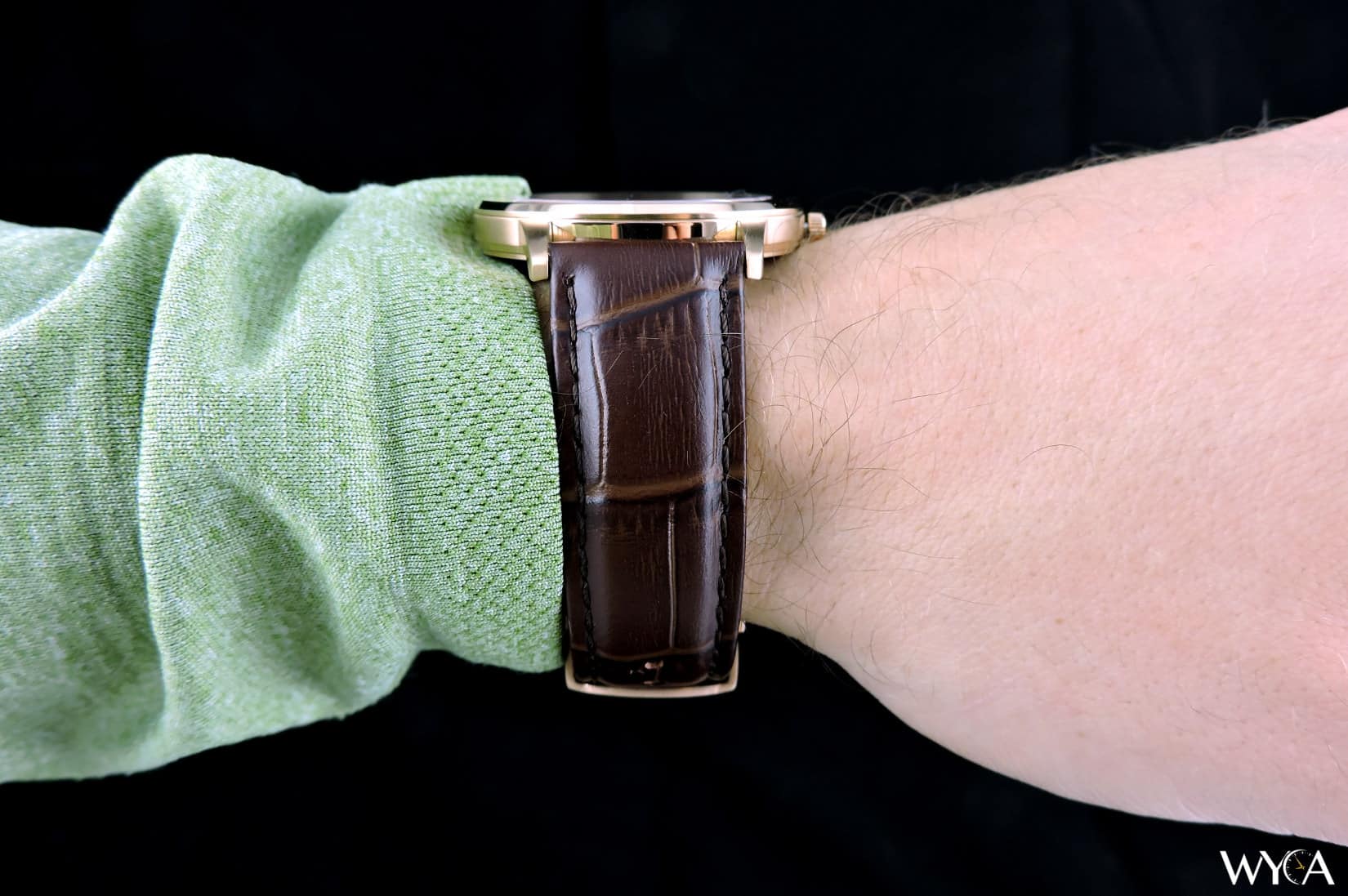 The movement is also good, albeit not as accurate as movements used in comparable watches. However, its accuracy is still well within acceptable deviation. It’s highly unlikely that you need your watch to be more accurate than a second per day. The big benefit here is the battery life, which is a good two years longer than watches sporting a Miyota movement.

I’ll close with this: it’s a great looking watch, and it’s made well, too. It’s not flawless, but it’s pretty close. It’s also $20 less expensive than the Corniche, and if you’re shopping the Corniche based on look, you should also be looking at this Ianuarius Richie.