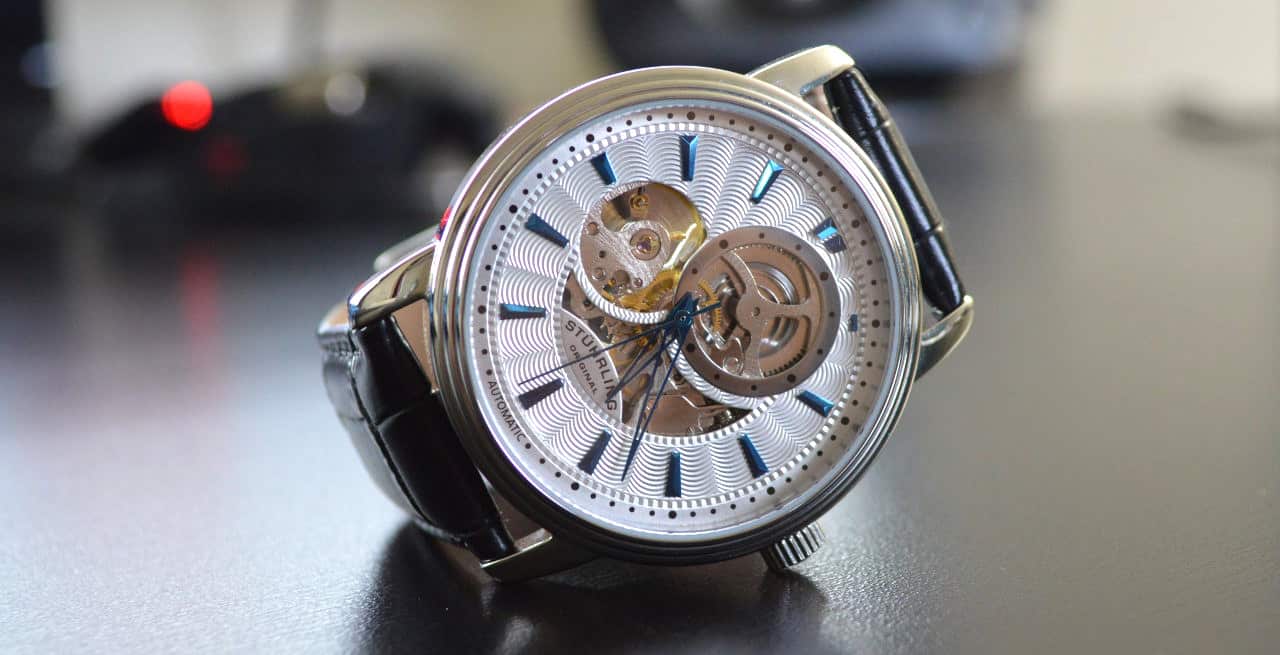 The brand’s originals date back to the 1800’s, but the Stuhrling Original of today began in 1999. Scoffed by many in the watch community for cloning designs of more famous brands and using inferior movements, Stuhrling Original produces timepieces at affordable prices and utilize a range of both quartz and automatic movements.

Stuhrling Original is said to have good customer service and warranties.

Our reviews are based on our first-hand experience with the watch. All photos and media are created by us (unless otherwise credited). Learn more about how we review watches and don’t forget to check here to see real customer reviews, specs and prices on Amazon.

The Stuhrling Original Delphi Acheron, assuming that it follows the standard the brand now sets, is not a bad purchase when acquired for its $150 street price. It’s absolutely an attractive automatic that gets attention, and it’s built pretty well. Time will tell about longevity, but my experience with it so far has been positive.

The lack of complications makes operation of the Delphi Acheron nice and simple. Everything is operated via the crown. 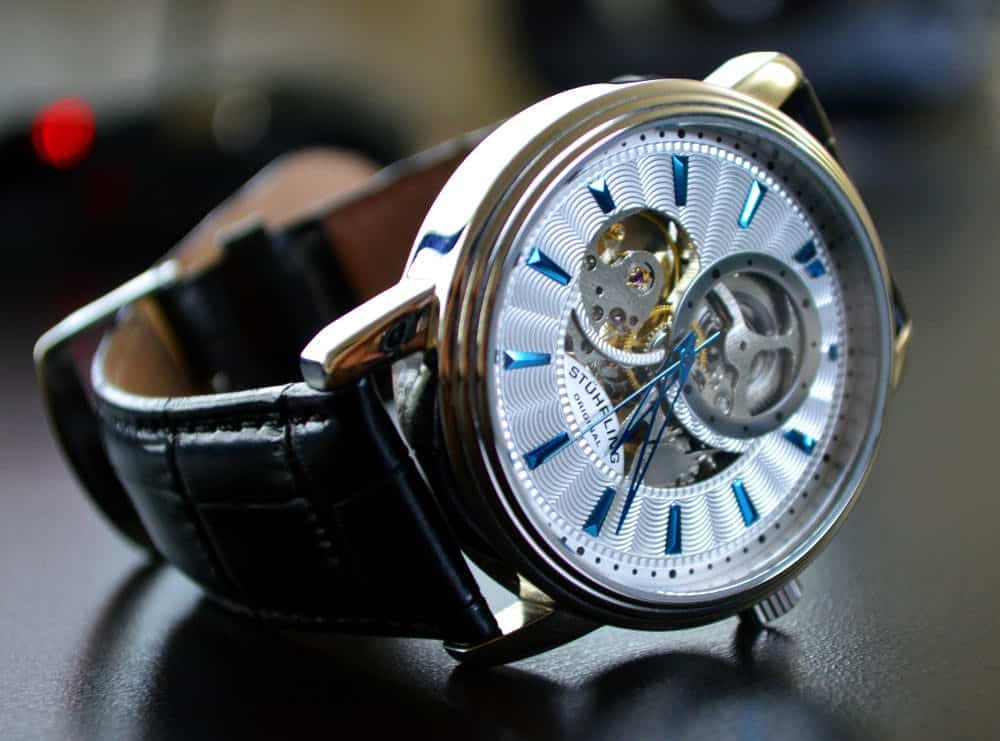 There’s no denying that the Delphi Acheron is a handsome watch. It’s guilloche dial, blue hands and markers, and open heart cutaways absolutely elevate the watch. It doesn’t look like it’s selling price averages around $150, that’s for sure.

On the front of the case, the dial shows an exposed movement. The blue hands can be overpowered somewhat by the backdrop, but it still leaves the Delphi Acheron is quite the looker. Despite costing under $200, this watch receives more compliments than more expensive pieces.

The movement is sparesely decorated, save for blue screws and the brands engraved name. The movement itself looks clean and well presented. Other Stuhrling Original watches have been overdone and overdecorated. The Delphi Acheron doesn’t suffer from similar design choices.

It’s a bit of a thicker watch, coming in significantly thicker than a Hamilton Jazzmaster Day/Date despite having no complications. The crown is nicely engraved and completes the upscale aesthetic.

Stuhrling Original has a bit of a dubious reputation for poor quality control, but if that’s the case it doesn’t appear to be very evident on the Delphi Acheron. The quality of build seems above average for the price, with the movement feeling tight and responsive when manipulated.

Krysterna is to Stuhrling Original what Hardlex is to Seiko watches. Stuhrling claims it offers improved resilience and glare reduction, and my experience with it suggests that it does its job. Visibility is never an issue with the Delphi Acheron, and after weeks of wear it shows no signs of use.

The case is polished stainless steel, and like all stainless steel it does show evidence of wear: fine scratches and hairline marks on the bottom of the watch are visible. It is no worse than comparable watches, however.

The crocodile-grain leather feels nice and surprisingly high-quality. It’s soft and supple, feeling at home on my wrist. It does show some wear where the clasp tightens, but overall it’s better than I expected given the price.

The clasp is a stainless steel unit, standard in all respects.

Stuhrling Original is using its ST-90050 movement, otherwise known as the Hangzhou 2189. This movement is a clone of the ETA 6497/6498 and has proven itself to be fairly reliable. While not necessarily considered a prestigious movement, it is considered one of the higher quality Chinese-manufactured movements.

During my ownership it has gained and lost a few seconds per day, tending to average +8 seconds per day. This is average for entry-level automatics, and pretty good for its price. 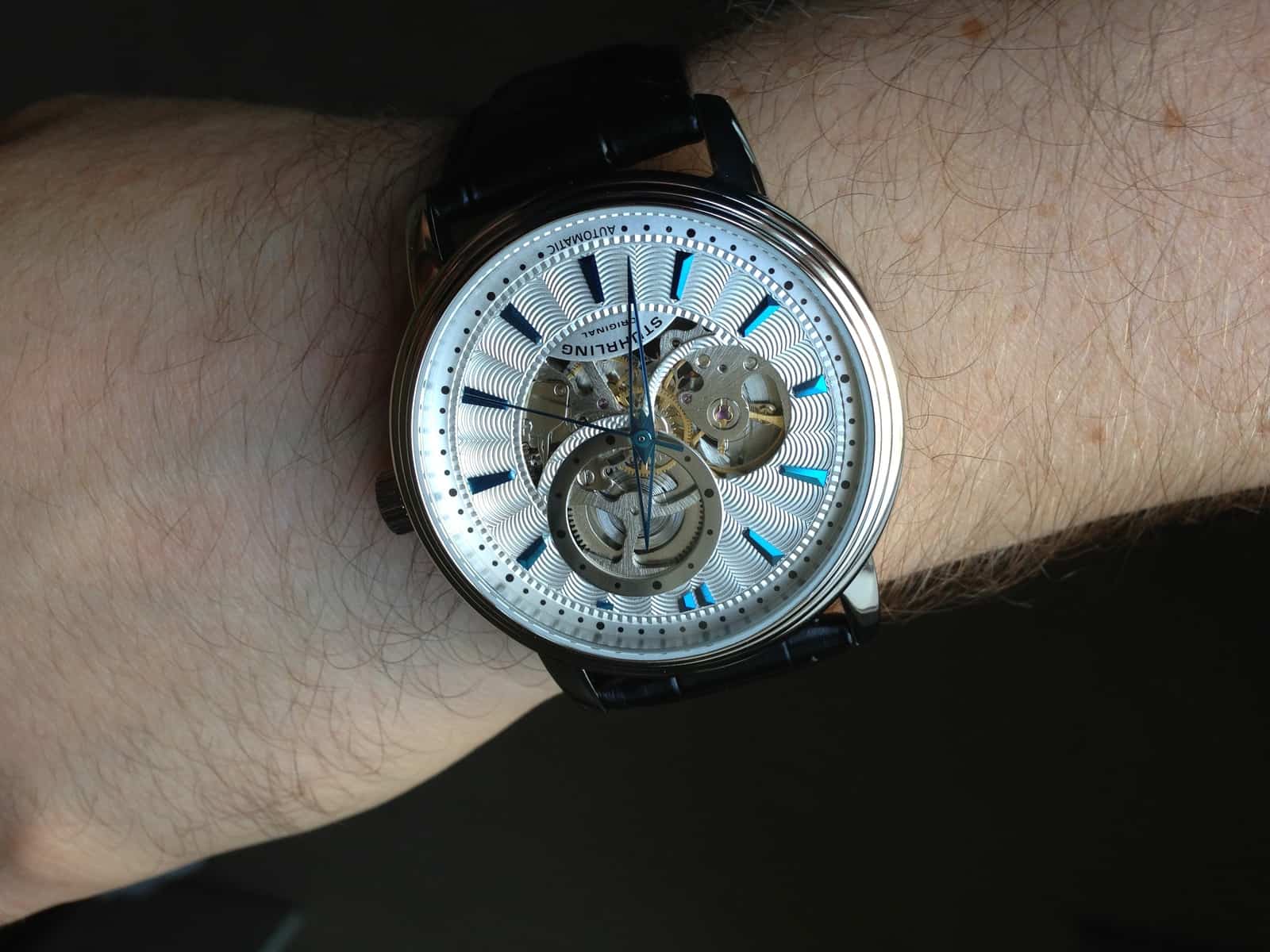 Value is subjective when you look at automatics in this price range. You can’t expect Swiss or Japanese movements and also get the upscale looks and materials. In this respect, I feel the Delphi Acheron gives you a respectable movement and the bells and whistles that people seem to value in a watch today.

Compared to watches worth thousands of dollars more, the gaps in quality between say an upscale Hamilton and this Stuhrling are obvious. Without that comparison, though, this Stuhrling stands on its own. I’d almost go so far as to say that Stuhrling is on its way to becoming a leader in the affordable automatic market.