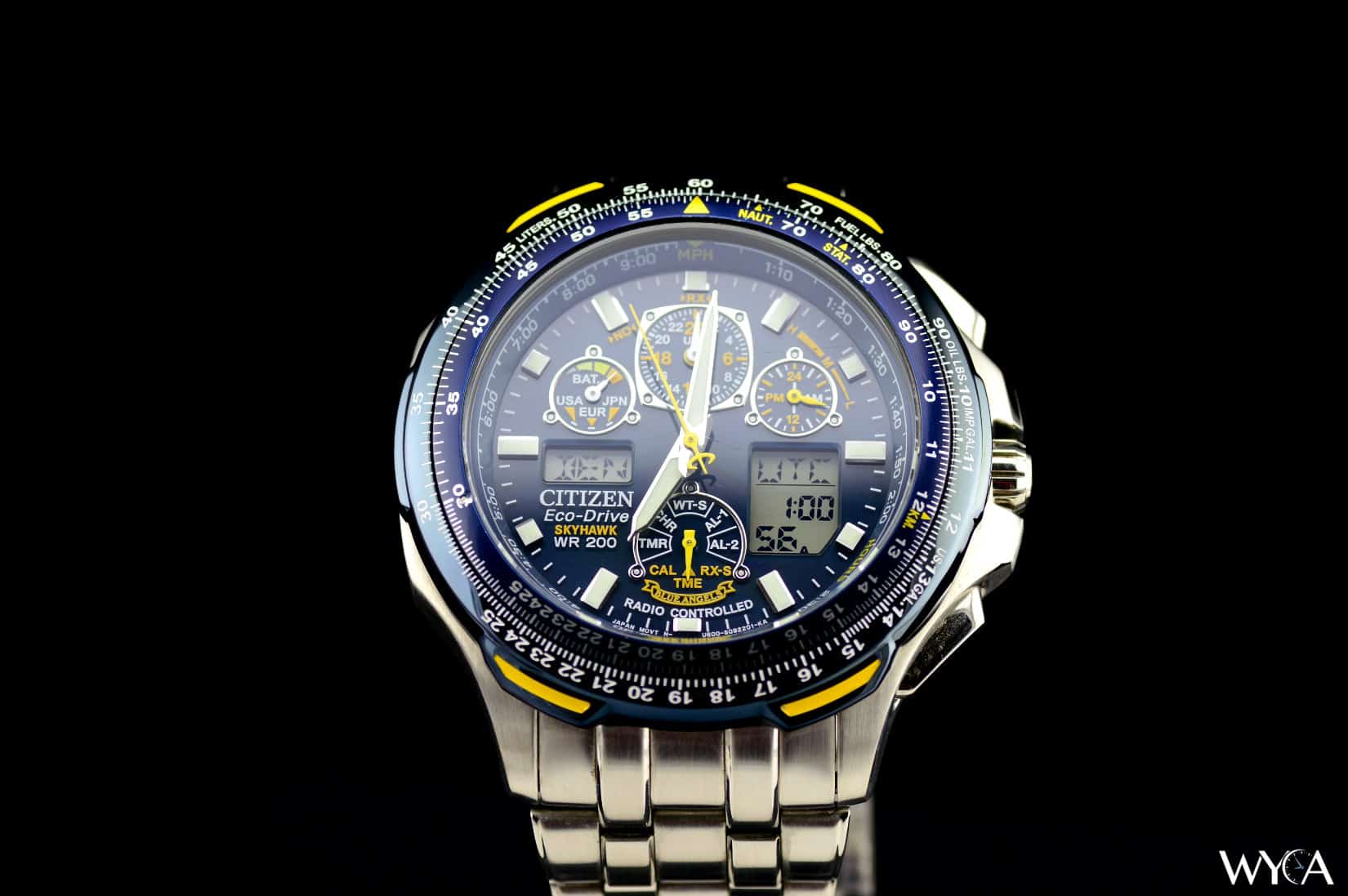 There Are Capable Watches, And Then There’s the Citizen Skyhawk

Hot on the heels of our Seiko Flightmaster review, here we are with another quartz chronograph that features that handy slide-rule. That’s about where the similarities end, as Citizen has taken the “functional” aspect of the Skyhawk to extremes. I’ve never encountered a non-smartwatch as feature-rich as the Skyhawk “Blue Angels” watch.

Citizen has loaded the Skyhawk to the gills: atomic timekeeping (that syncs and re-calibrates daily), alarm function (two alarms can be set), a 24-hour chronograph that measures down to 1/100 of a second, a power reserve indicator, 43-city world time, the previously mentioned slide rule, day/date display, countdown timer, and more.

This is a seriously loaded watch. Let’s check it out. 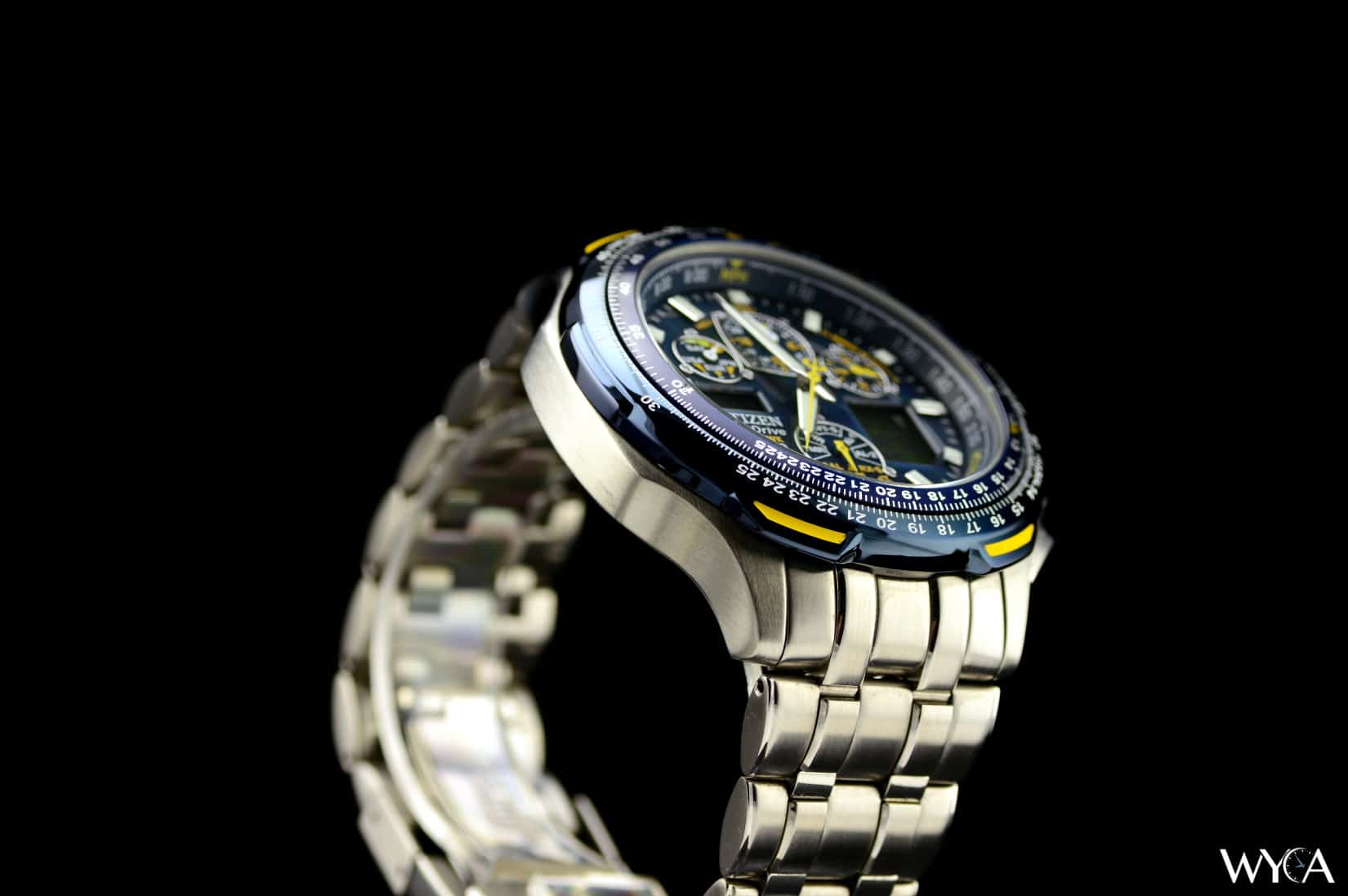 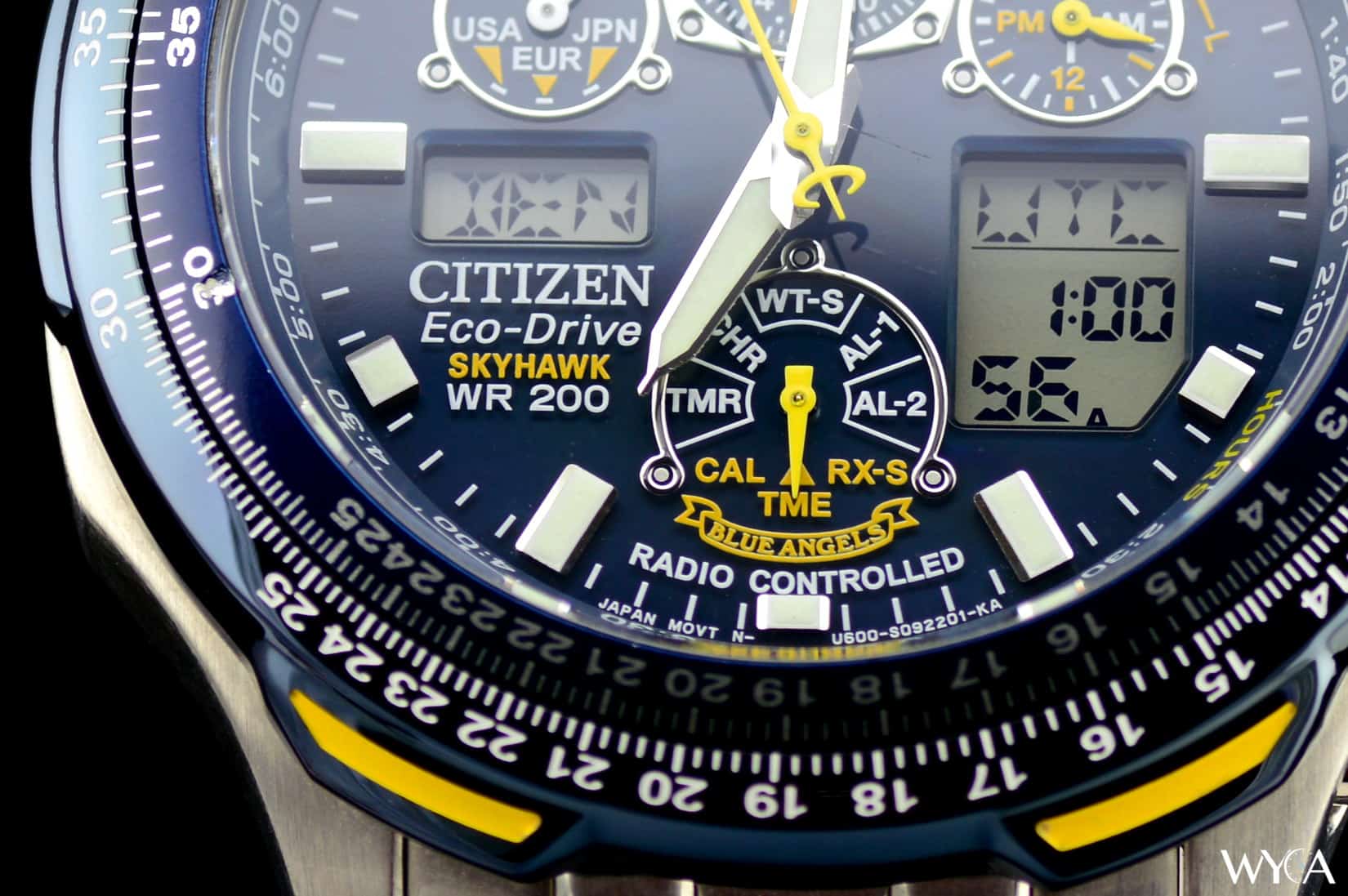 There are a lot of adjectives I could use to describe the Skyhawk: complex, robust, macho, intricate, capable, high-tech, and so on. Beautiful won’t be among them, but that’s by design. The Skyhawk Blue Angels edition isn’t meant to be beautiful.

A watch needs to deliver on its appearance, and if the Skyhawk Blue Angels isn’t beautiful, what is it? Given its 45mm case (that’s 15mm thick), the Skyhawk is a prominent feature on any wrist- it looks good, and certainly isn’t off-putting. It isn’t gaudy, and it definitely isn’t obnoxious. It looks like a well-designed tool.

I wouldn’t go so far as to say the Skyhawk is stylish, but I will say that it is well styled.

The dial is a little overwhelming at first, but once you’ve taken a few minutes to learn what each element is and what it does, the face becomes more navigable. It makes sense, too: looking past the slide-rule, for example, leaves a much simpler dial with chronograph and dual LCD screens. This simplicity is relative, of course, as the dial still has four sub-dials and two LCD screens. 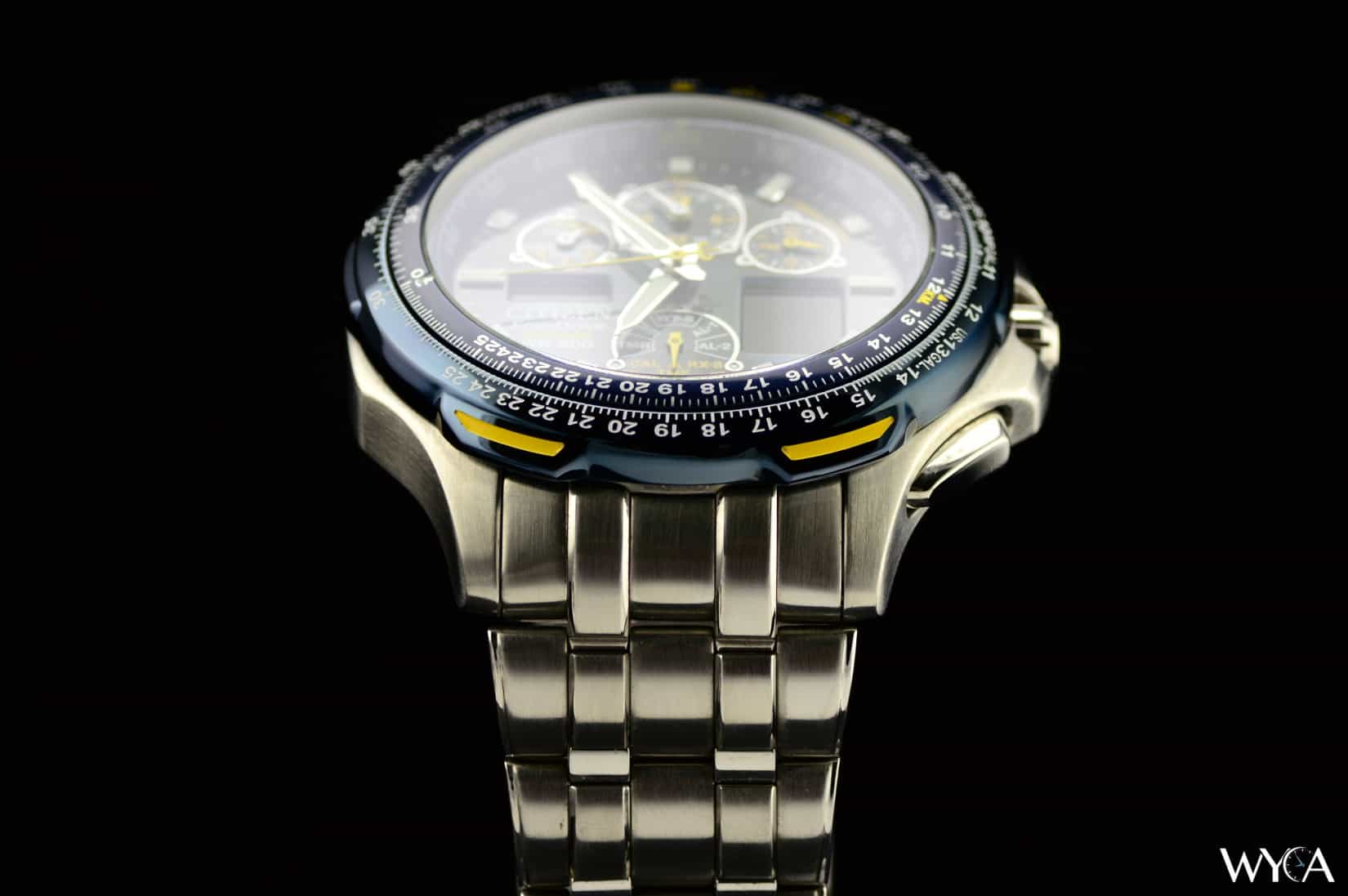 The blue dial and rotating bezel are done in dark, rich tones. As the colors used for the dial and markings contrast, the dial is always easy to read. Ample lume on the hands and hour markers ensure this remains the case at night as well. The left LCD displays the timezone (mine is set to “Denver”), and the right LCD is where the various functions, alarms, etc. are displayed. The LCD screens also feature a back-light, cementing their usefulness around the clock (pun intended).

It’s not a small watch: it’s big and thick, with a large 23mm stainless steel bracelet rounding out the package. Still, the Skyhawk Blue Angels edition looks its part: it’s confident, and it absolutely offers no apologies for its complicated dial. It’s built for a purpose, and on that level it’s a bit of an over-achiever. There isn’t much the Skyhawk can’t do.

All these things make the Citizen Skyhawk Blue Angels my kind of watch.

The Skyhawk could be described as a tool watch: the integrated slide-rule allows it to perform all sorts of calculations; the chronograph allows it to be used as an accurate stopwatch; the dual-time zone feature makes it a great travelling companion. All of these inclusions make the Skyhawk genuinely useful, and for more than simply telling the time.

Despite this, telling the time is indeed what it does best. If you travel frequently, the dual time zones are a handy feature. So too is its auto-syncing timekeeping mechanism, which connects to an atomic clock via radio and syncs itself. It does this automagically, too: you just sit back and watch.

200m of water resistance also makes it an excellent daily wearer, as you can do anything aside from actually go scuba diving with the Skyhawk on your wrist. You could wear it in the shower, or even the pool so long as you’re not diving deep (I’d avoid steam rooms/hot tubs, though). 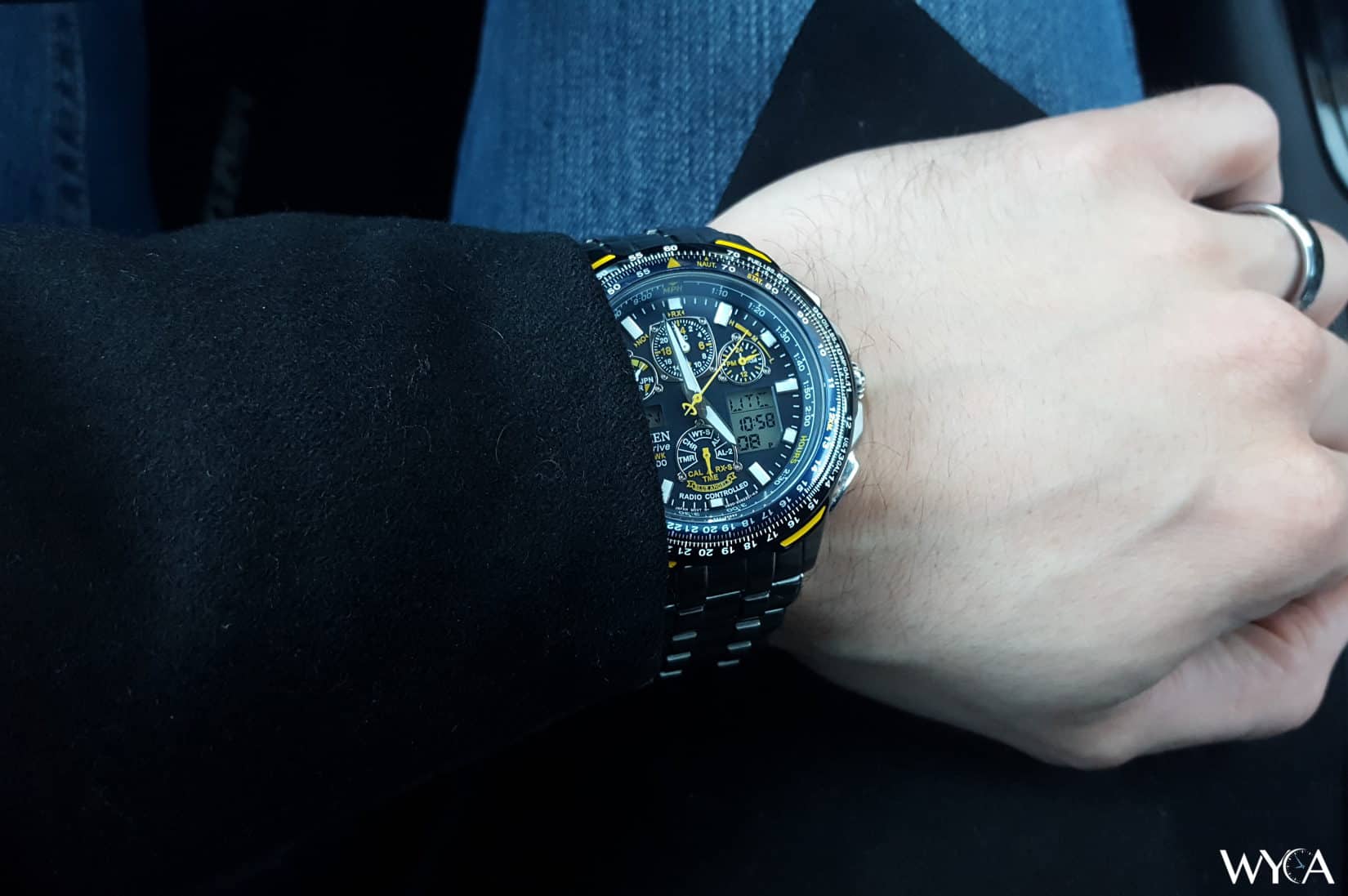 This model comes in stainless steel, though you can get a version of the Blue Angel Skyhawk that is built with titanium. If you intend on wearing the Skyhawk everywhere you go, I might recommend you pony up the extra $100 or so and get yourself into the titanium model. You’ll be glad you did when it still looks new in a few years.

The mineral crystal is a huge miss. It sits evenly with the bezel, meaning that it has no scratch resistance of any kind. Considering the oversized diameter and generous thickness of the case, it strikes me as odd that Citizen wouldn’t have fitted sapphire to the Skyhawk. This watch absolutely deserves sapphire- its absence doesn’t make sense to me.

Sadly, where the watch shows most of its wear is right here on the mineral crystal.

Otherwise, the case and dial are built with the exacting tolerances and attention to detail that Citizen is known for. I’ve reviewed a few Citizen watches now (I personally own four including the Skyhawk), and build quality has never once been a concern.

Even under magnification from behind my Tamron 90mm macro lens, the dial looks excellent. You won’t have any problems here.

The Skyhawk is fitted with a stainless steel bracelet and a fold-over deployment clasp. The bracelet is serious business, feeling every bit as tough as it looks.

Compared to the case, the bracelet feels quite light. However, that’s not to say the bracelet itself is light (it isn’t), but rather the case is that much heavier. As a result, the Skyhawk feels a little top heavy and is prone to resting at the bottom of whichever side of your wrist is angled downwards.

The clasp is a high quality unit, engraved with Citizen’s branding, and remains securely closed when worn. I’ve had this watch on and off my wrist for a period of almost a year, and not once has the clasp come undone accidentally.

Like you might expect, a watch with this many built-in functions is also complex. It’s difficult to operate initially, definitely requiring some studying of the users manual. I actually found it easier to watch the setting instructions video on Citizens website (select U600 movement). The full user manual for the u600 movement is here. 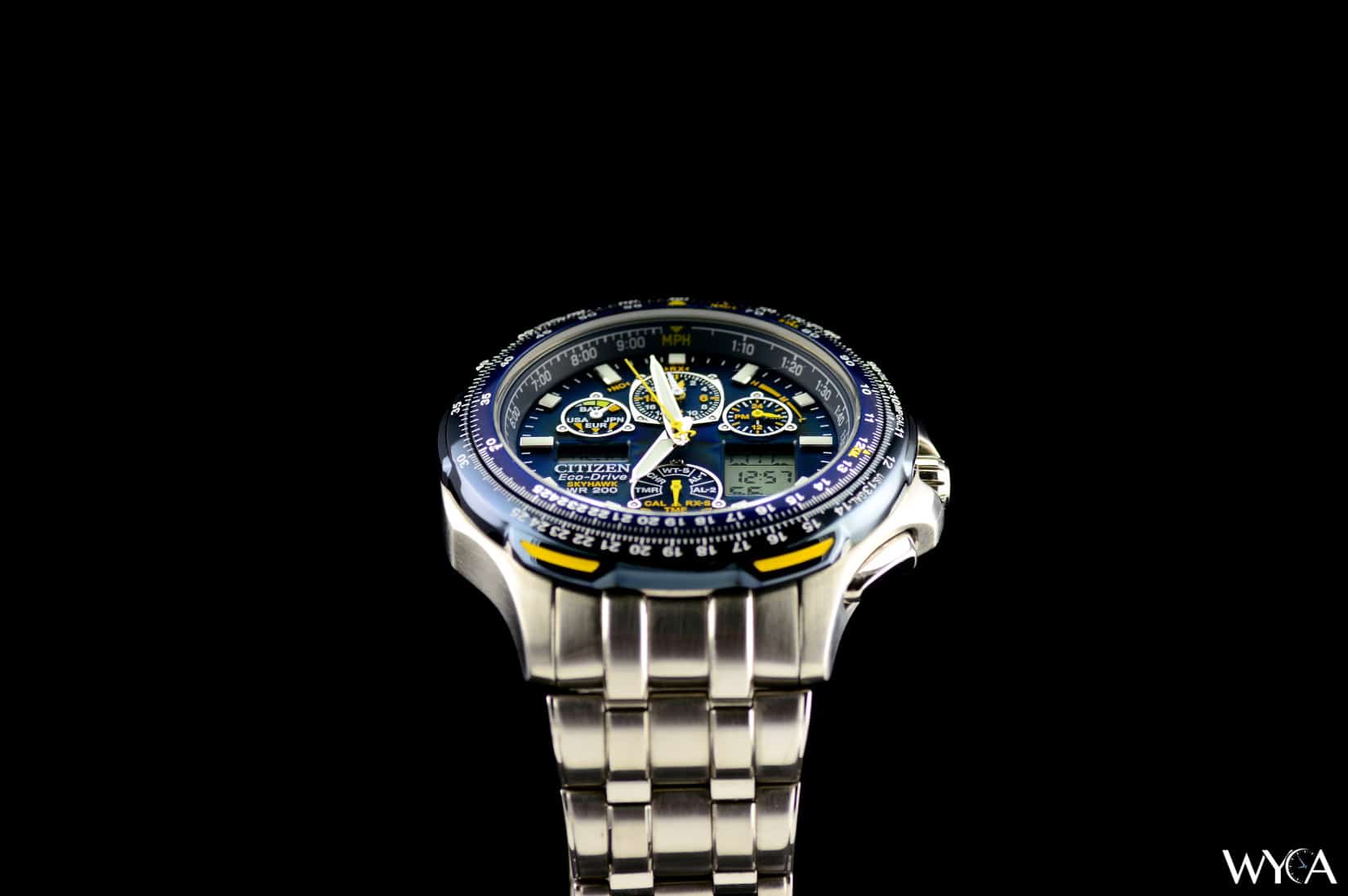 I recognize that not everyone will find the Skyhawk a suitable addition to their wardrobe, but I don’t think the Skyhawk is meant for everyone. For someone who will use the functionality built into the watch, there’s genuine value it its capability.

This version of the Skyhawk is quite big at 45mm, though smaller versions exist. I’m not a fun of oversized watches, though I admit that the Skyhawk uses every bit of available real estate.

Citizen is known for making affordable watches that are packed with value and built with care. The Skyhawk Blue Angels is another example of these qualities in action. This is an excellent watch all around; I think it’s a great buy.