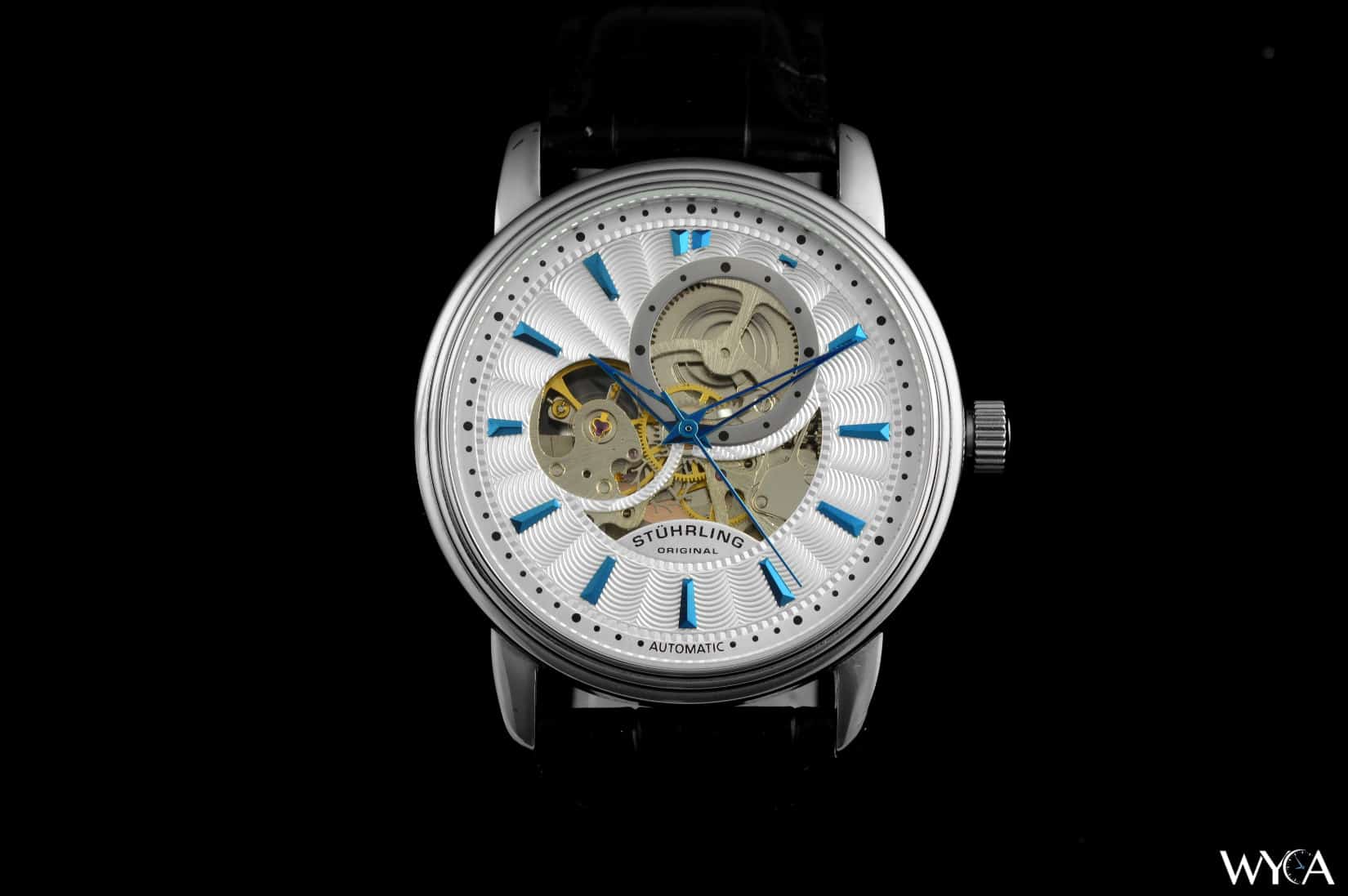 I first reviewed the Stuhrling Original Delphi Acheron in October 2013

It was a lot of firsts, and I’ll be honest when I say that I wasn’t too sure of how good of a buy it was. At the time, finding good information about Stuhrling Original watches was a challenge, as there were a few forum posts but no real hands-on reviews.

I’ve had the Delphi Acheron for nearly three years now, so it seems like a good time to chime in about how it’s held up. Oh, if you haven’t already, read the original Stuhrling Origial Delphi Acheron automatic review. Don’t forget to check here to see real customer reviews, specs and prices on Amazon. 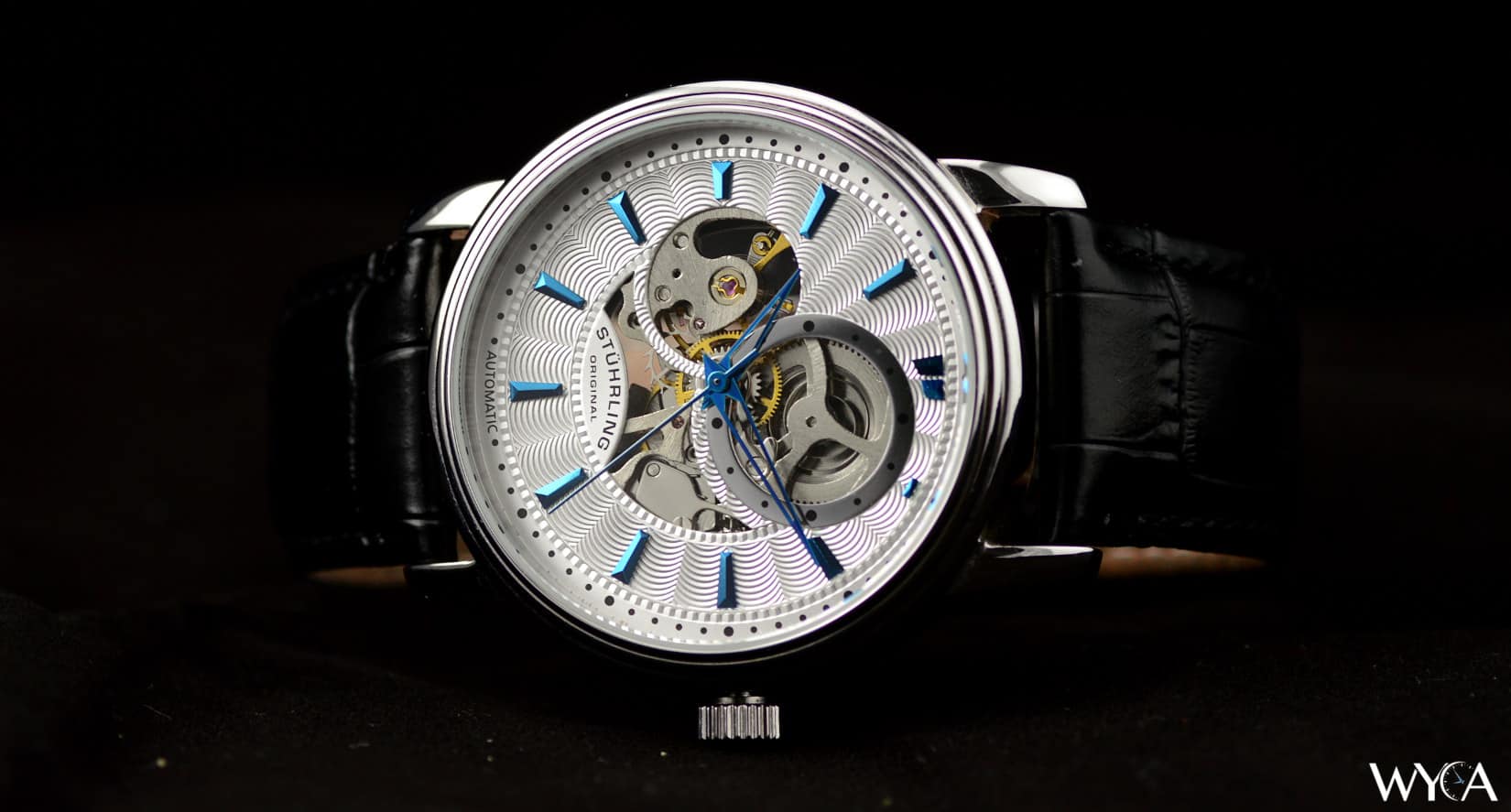 How Has the Delphi Acheron Worn?

The stainless steel case is showing a bit of a story, but it’s nothing overwhelming. I used to wear the watch frequently, but now that I’m 30lbs lighter, the 44mm case is too large for my smaller wrists.

I’d say it’s received a total of around 800 hours of wrist time, and I have to admit that it looks good overall. Yes, a few scratches on the case, but the sides and lugs of the watch are largely wear-free. The underside of the watch – and on the lugs in particular – show wear, but again, it’s a lot less than I’d have expected.

The crown feels good, though when manipulating the time there’s a quarter-turn gap before the movement starts to respond to your input.

The guilloche dial still looks new, as does the Krysterna crystal. I haven’t had any problems with hour markers or hands coming off or out of alignment- it still looks as good as the day I bought it.

However, having more experience with watches and the differences that separate something good from something great, I can spot where the deficiencies in the Delphi Acheron lie. Small things, like tool marks clearly visible on the exposed parts of the movement, aren’t plainly obvious but they’re also seen by the unaided eye. No zoom lens needed.

Turn the watch over and you will find a single mark on the exhibition crystal. I’m not sure how it got there, but present it is regardless.

Here’s where the Delphi Acheron shows a lot of wear: the strap. The leather which felt pretty good at first has not aged well. It’s significantly marked, showing each hole the clasp secured to.

The leather around the clasp connection is cracked and worn – badly – and the strap itself feels more rubbery than leather now. It’s still comfortable to wear, but it’s lost that feeling of plushness that it had when it was new.

The clasp still looks good and does it’s job as it’s supposed to. There’s nothing to report here. 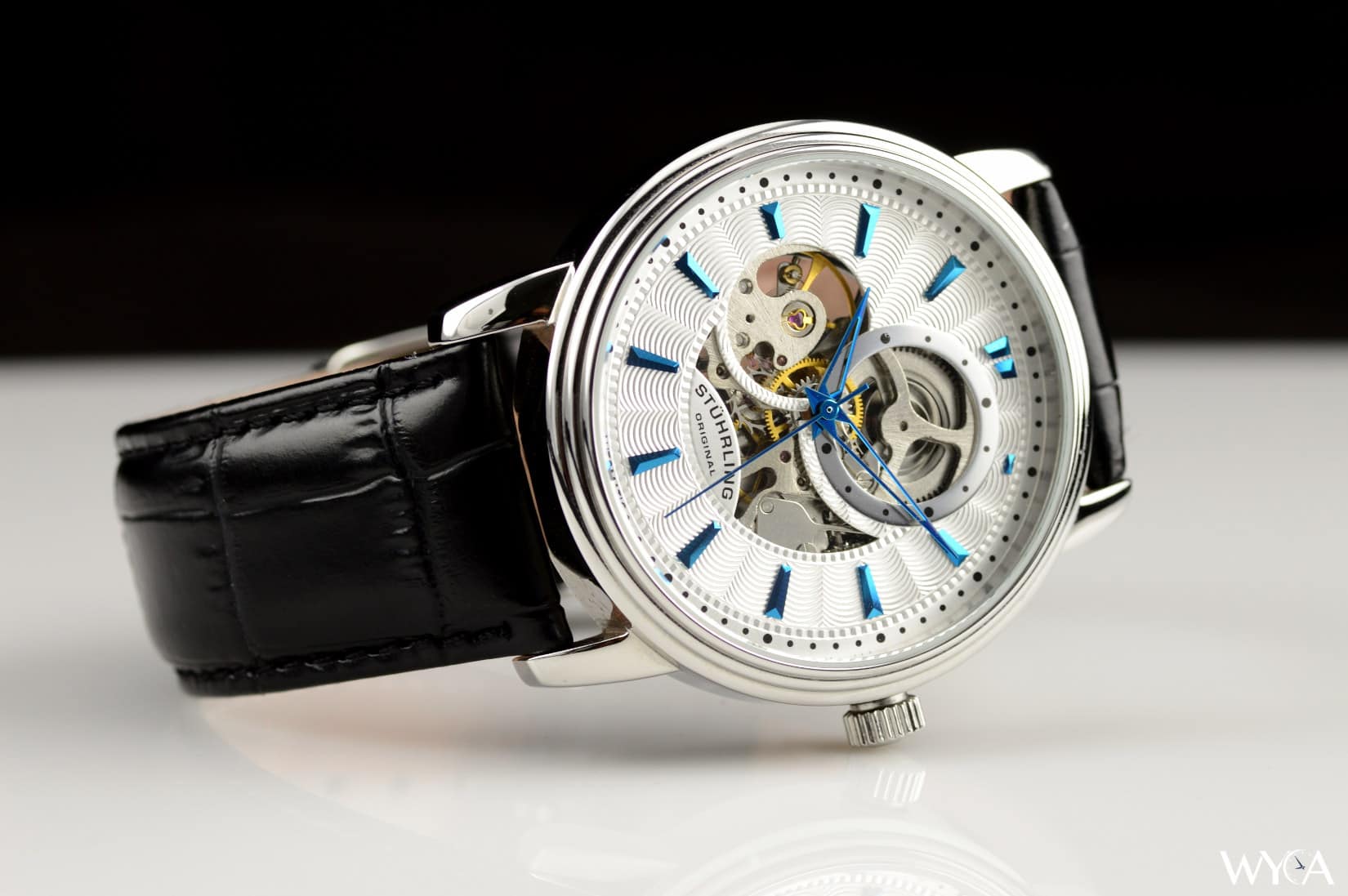 But You Know, This Stuhrling Sure Takes a Good Picture

The automatic movement that Stuhrling Original has so boldly displayed on the skeleton dial still does its job, and it’s power reserve hovers around 34 – 36 hours.

According to toolwatch.io, it’s -22 seconds per day now. That’s really not great accuracy, but when the watch itself is just a few cents over $100, it’s hard to really fault it given that it’s been reliable overall.

It’s also a pain in the butt to take photos of, as it sort of hacks… if you turn the crown counter-clockwise while it’s pulled.

My tastes have changed quite a lot since I first picked up the Delphi Acheron. At the time, I really liked its white guilloche dial and blue hands and markers. Today… I’m not so sure.

It’s attractive, sure, but I find it quite busy and overdone. If they had opted to remove the dots marking the second increments on the outer-rim, I feel like that would have gone a long way in toning down the busy face.

There’s also the size. 44mm is big, and this watch goes out of its way to draw attention to itself. If you’ve got wrists that are even slightly thinner than average, you’re likely to find it too big and too noisy. Unless you prefer it that way… I don’t judge.

Would I Buy the Stuhrling Original Delphi Acheron Automatic Again?

I can’t say that I would, for a few reasons.

First, it’s too large for my wrists. Like the Tissot Squelette, which I absolutely adore, the Acheron is just too large for me to wear well. In the case of the Squelette, I think it’s just gorgeous… yet I still can’t pull it off. Even if I wanted to wear the Acheron and didn’t find it a little over the top, it’s too big for me anyway.

Lastly, the strap is really not the quality I was hoping for (and thought it was) when I originally reviewed it. It hasn’t aged well, and I think that if you’re going to wear the Delphi Acheron often that you’re probably going to want to replace the strap.

That said, I read on many forums that Stuhrlings don’t last long. As if to reinforce that sentiment, one of the popular search terms people use to find WYCA is “are Stuhrling watches junk?“. Well, I don’t think that they are. True, I’ve experienced mixed quality from them (like the hands on this one), but on this one I really don’t have much to objectively complain about. It’s not very accurate, to the surprise of no one, and my sentiments regarding styling are subjective anyway.

If you like how it looks, I have no objective reason to try to deter you from buying it. It’s done pretty good by me.