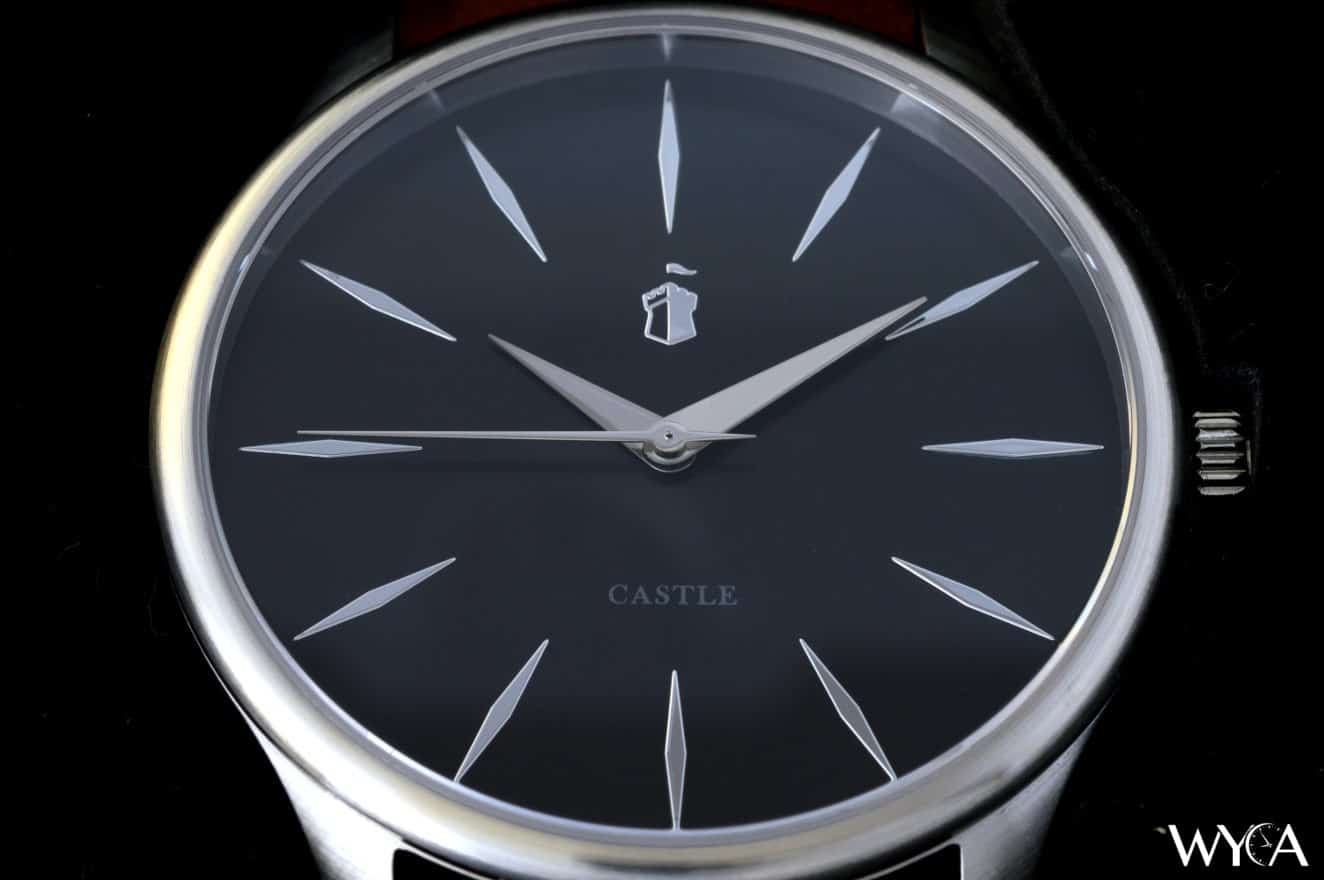 Castle Watch Co. is a small brand from the San Fran Bay Area. Formed by two lifelong friends who took on the simple, yet impossible challenge of making a watch that not only looks good, but doesn’t break the bank. Their inaugural piece is the Corbel Standard Issue.

The Corbel Standard Issue hit the market in September 2015.

Castle Watch Co. sent us two Corbel’s to review and give away. Thanks guys! 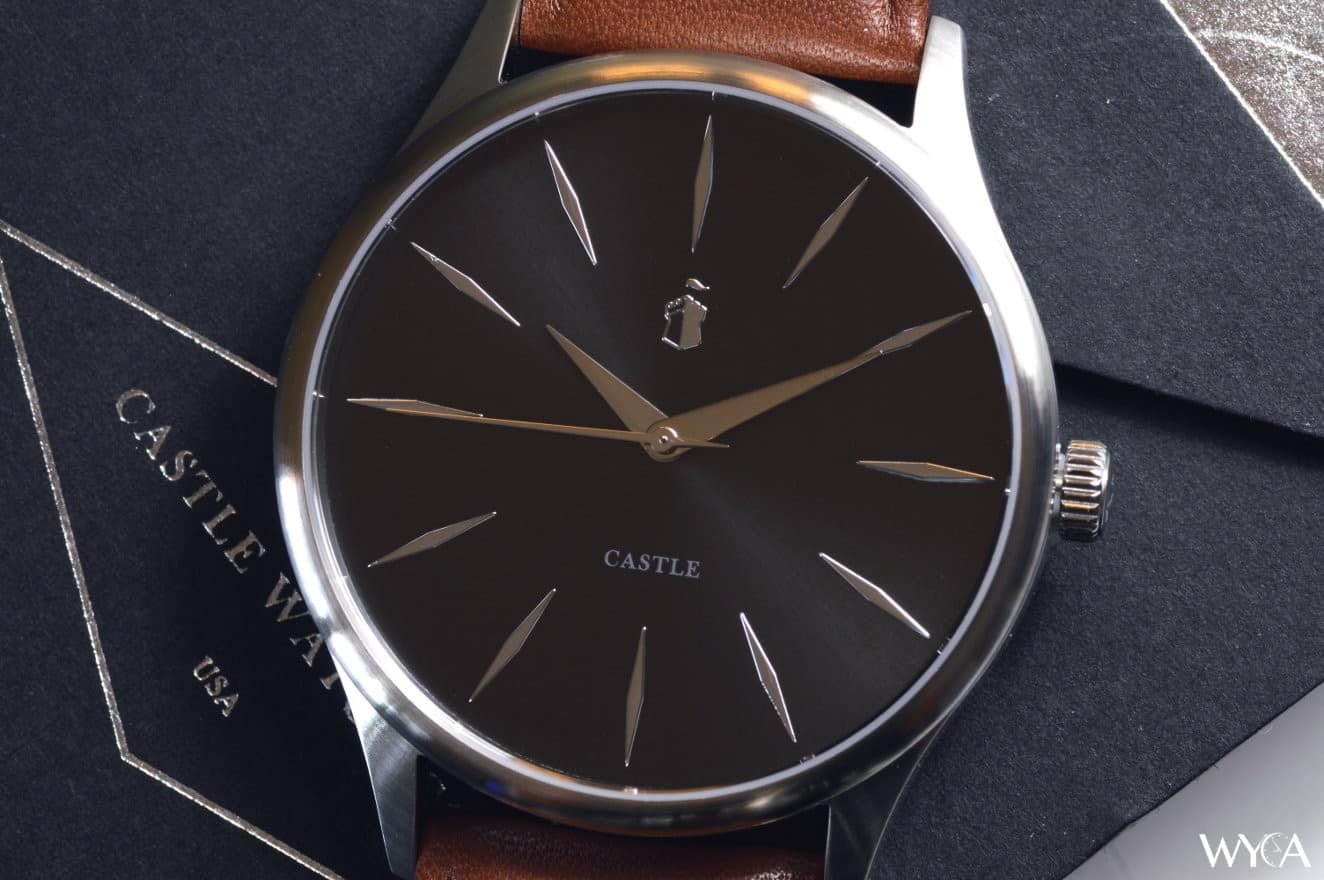 The Corbel Standard Issue has a 42mm 316L brushed stainless steel. There aren’t a lot of features to the case but that isn’t necessarily a bad thing. Castle has clearly gone for the “less is more” approach and it works well.

However, despite this minimalist design, Castle still managed to work in a few personal touches. The Corbel features a signed crown, as well as an engraved case back with the watch specs encircling the Castle Watch Co. logo in the middle. I’m a sucker for these little features, and I think Castle did a great job in this regard. 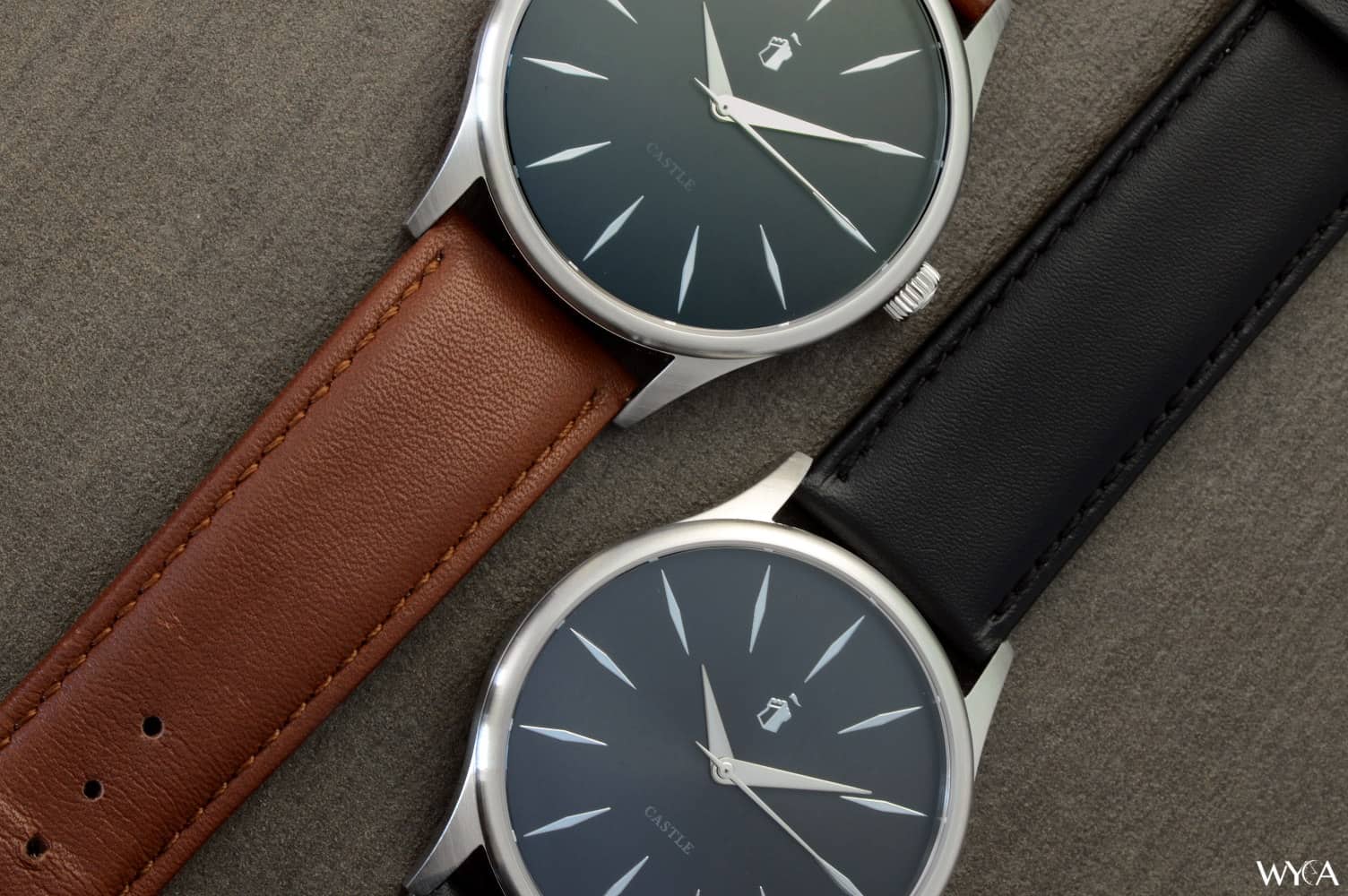 This version of the Corbel has an inky black sunburst dial and polished diamond shaped markers. All 3 hands are also polished which contrasts nicely with the brushed case. At the 12 o’clock position is the brand’s castle turret logo, and at 6 o’clock is their name “CASTLE.” It is a very clean minimalist dial that works well in both professional and casual settings.

However, I do think they could afford to have the Castle name stand out a little more on the dial. While mildly reflective, it seems to be a different, darker color than the markers, logo, and hands, which can lead to it being overlooked.

The Corbel carries a sense of lightness to it, but it doesn’t feel cheap. Castle has fit a sapphire crystal to the Corbel, which is just brilliant at its sub-$100 price point.

The Corbel came on a quality 22mm black genuine leather strap. It is lightweight, comfortable, and dresses up or down easily. The leather straps also look and feel good, matching the look of the watch overall. At first I thought the strap to be a little plain, but the more I wore it the more I appreciated how much the strap match the minimalist face. 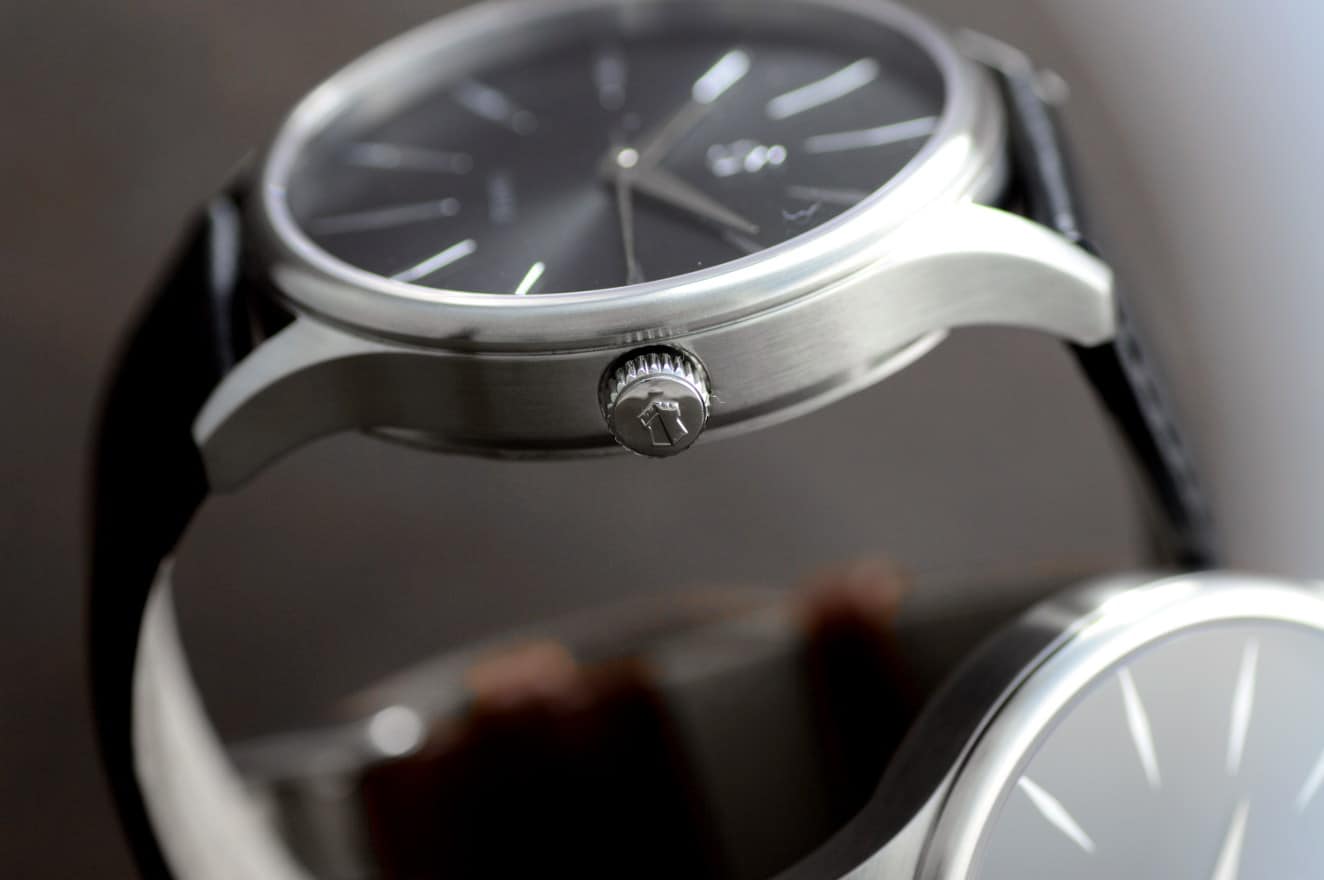 The brushed buckle has “CASTLE” engraved along the edge; a great detail. On the wrist the Corbel wears rather well. I’m not a very big man and have small wrists so for me 42mm is a little out of my comfort zone. However the Corbel is so lightweight and coming it at only 8mm tall, it fits nicely underneath a dress shirt. 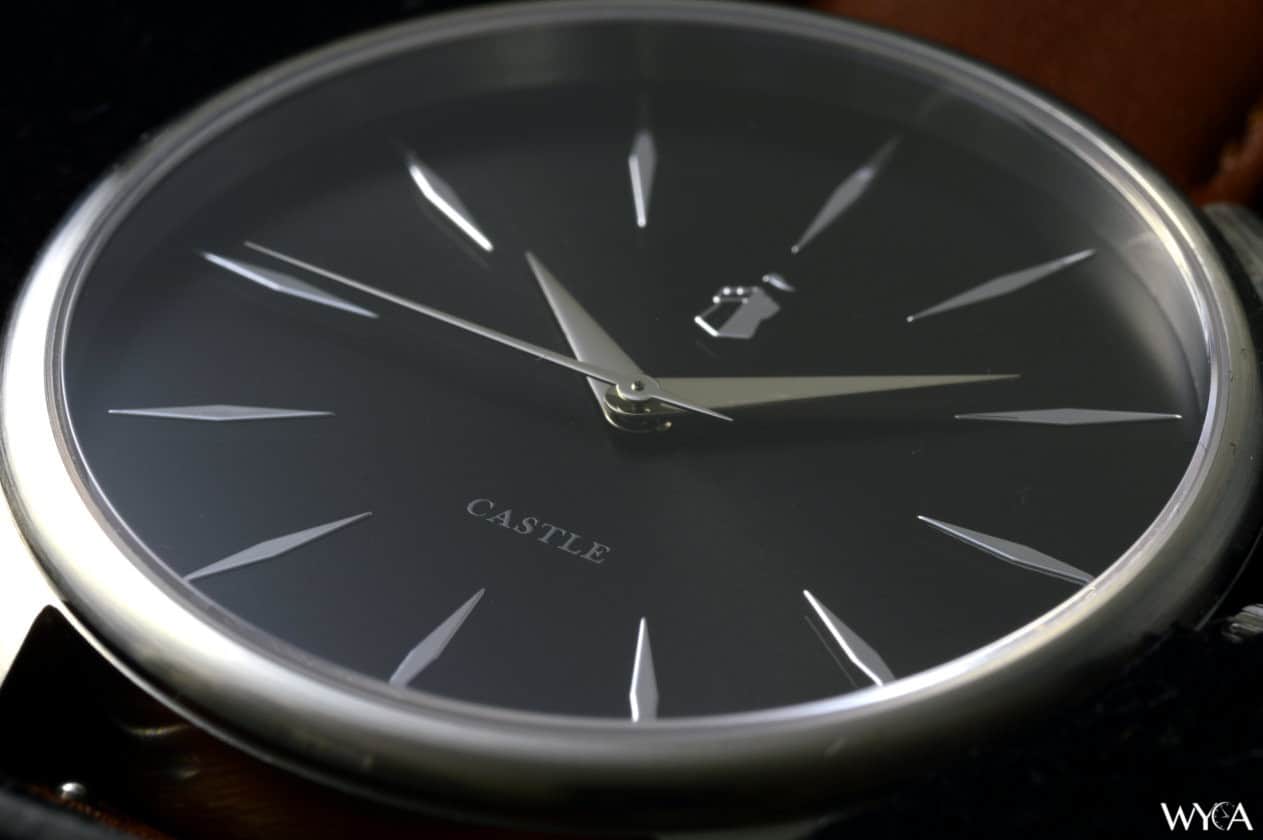 A quartz Miyota movement powers the Corbel; a reliable workhorse choice of a movement for a brand trying to keep costs low without using something dubious. At this $100 price point, the movement is less important than the style (in my opinion).

Still, it could have been nice to see an automatic movement sweeping the second hand across the Castle logo, though I suppose that would have raised the price somewhat.

Andrew (@lonelyhorologist) has been interested in all things mechanical for most of his life. In the 7th grade he bought his first pocket watch from a flea market for $1.50 and it has been proudly ticking in his collection ever since. Since then his love has grown to obsession. What started as few watches on a night stand has grown to an old library card catalog filled with straps and time pieces. Some of his favorite brands include Hamilton, Seiko, and Omega. Besides watches, Andrew is a running, dog, and whiskey enthusiast.