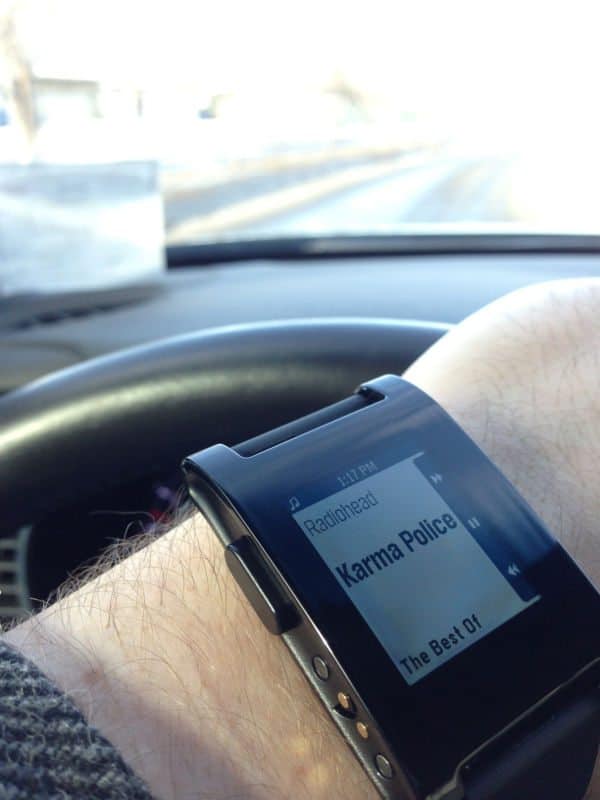 About the Pebble Smartwatch

The result of a wildly successful kickstarter campaign, the Pebble Smartwatch arguably started the smartwatch revolution.

Almost 69,000 people pledged a combined $10,266,845 to fund the development and production of the Pebble Smartwatch. It is one of the most successful kickstarter campaigns in the history of the website, far exceeding the $100,000 goal originally sought.

Despite its plastic construction, the Pebble is an excellent smartwatch in both build and function. It’s a fine example of what can happen when Kickstarter campaigns go according to plan. As a companion to your iOS or Android device, the Pebble integrates and enhances seamlessly. Recent price drops have made it a great value. 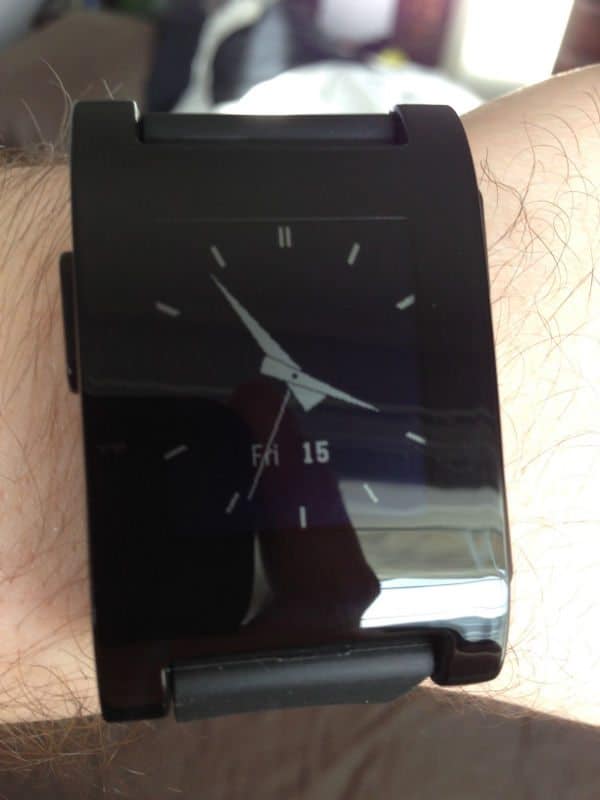 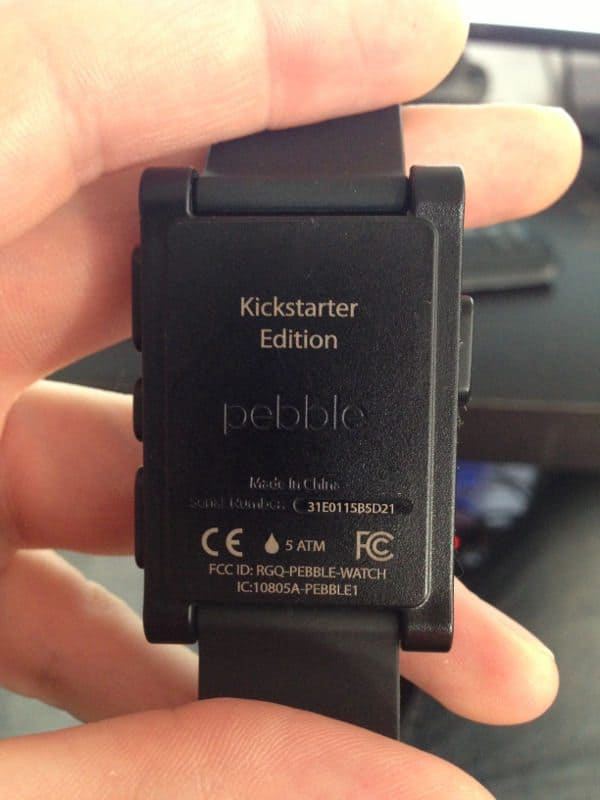 The Pebble connects to your iOS or Android device via Bluetooth (either version 2.5 or 4.0, which offers much less battery drain than version 2.5) and becomes a mobile notification centre. The concept of the watch was pretty simple: sync with your mobile device, display notifications, and enable cool functionality that a traditional watch simply can’t do. 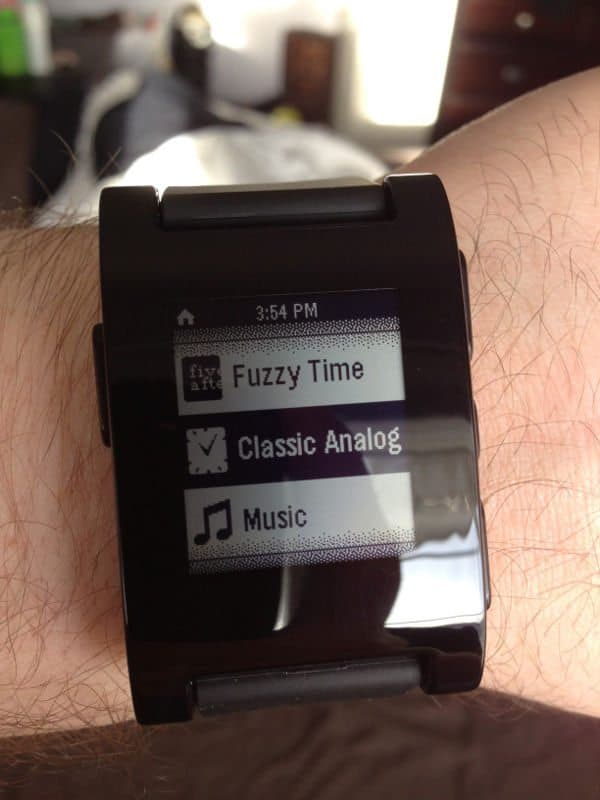 There’s no mistaking the Pebble for anything other than a high-tech gadget to come out of some design studio somewhere. It’s got all the tell-tale signs: a buttonless face; a slick rubber strap; a nergasmic magnetic charging cable; a cool e-ink screen; a perpetual low-power bluetooth connection. By default, you read the time like you would a book.

I gotta say, I love that. It’s got style, and it knows what it is. Sure, it’s light as a feather and made entirely of plastic (Would I have paid more for a metal one? Yes. Was that an option at the time? No.). Despite that, it feels cool and it does some pretty cool stuff, too.

The integrated music app is pretty good. It displays the song/artist on the screen and uses the two buttons on the right side of the Pebble as the forward/back function (shame you can’t use them for volume, though).

It’s backlight is sufficient left on auto. In bright light it’s clear and can be seen from quite the distance. At night the watch lights itself up pretty quickly, and in the event it doesn’t come on automatically, press any of the four buttons (or shake your wrist to activate the accelerometer) and the light will activate. 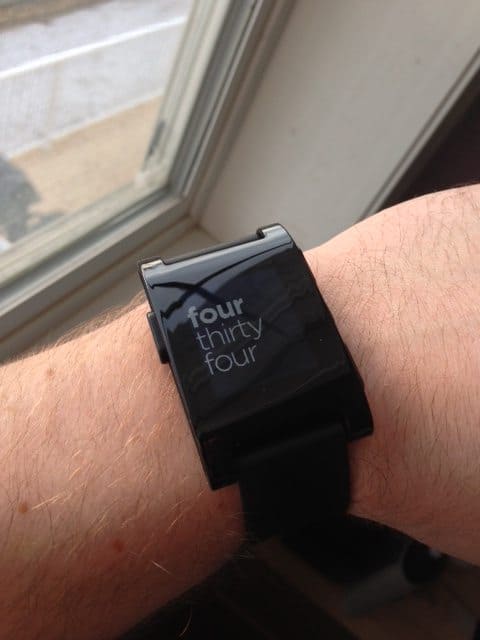 Nothing is ever perfect, and the Pebble is no exception to this rule. Like any new product it has its fair share of growing to do, though none of the minor inconveniences I encounter when wearing it would prevent me from buying it again or recommending it.

Probably the most notable is the random disconnections I’ve experienced. The Pebble just loses its bluetooth connection from time to time. In an eight hour window this may happen once or twice, and each time it happens resetting the bluetooth settings in the watch rectified the issue.

Second, the construction itself is both an accomplishment and a compromise. The lightweight plastic and scratch-proof display feel well put together, but that same lightness (coupled with the bundled rubber strap) gives off a certain “cheapness” to the feel of the watch. I would have happily paid another $50 for a watch made of metal.

Sometimes when I receive an incoming call and answer it from my phone directly, the Pebble continues to vibrate and show the name/number as if the call hasn’t been answered. This is very annoying, but tapping the bottom button (the decline call button) stops the vibrating and lets me talk in peace. This has happened three times over the last few days on probably 20% of the incoming calls I’ve had. 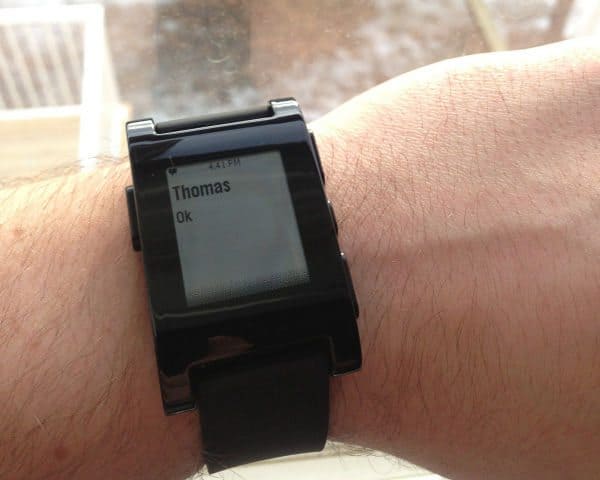 More About the Pebble Smartwatch

The Pebble is an interesting piece of engineering. It boasts contemporary beauty, excellent versatility, and the promise of even more functionality as time passes. However, like all technology, I can’t help but wonder how long it will take until there’s a Pebble2, and suddenly the original Pebble loses its luster.

Priced at $150, the Pebble is a bargain if you’re into this type of thing. I don’t know if “smart watches” will ever take off in the same fashion that smartphones have, but this one is certainly something cool. As I mentioned earlier, possibly the best (and worst) part of owning a Pebble is that the life of this watch is just beginning. As apps are developed that utilize the watches functionality it will be able to do, and be, more.

At $150 there simply isn’t anything else quite like it, and despite the few kinks it has right now (to be expected), I get the feeling that perfection is just a software update or two away.