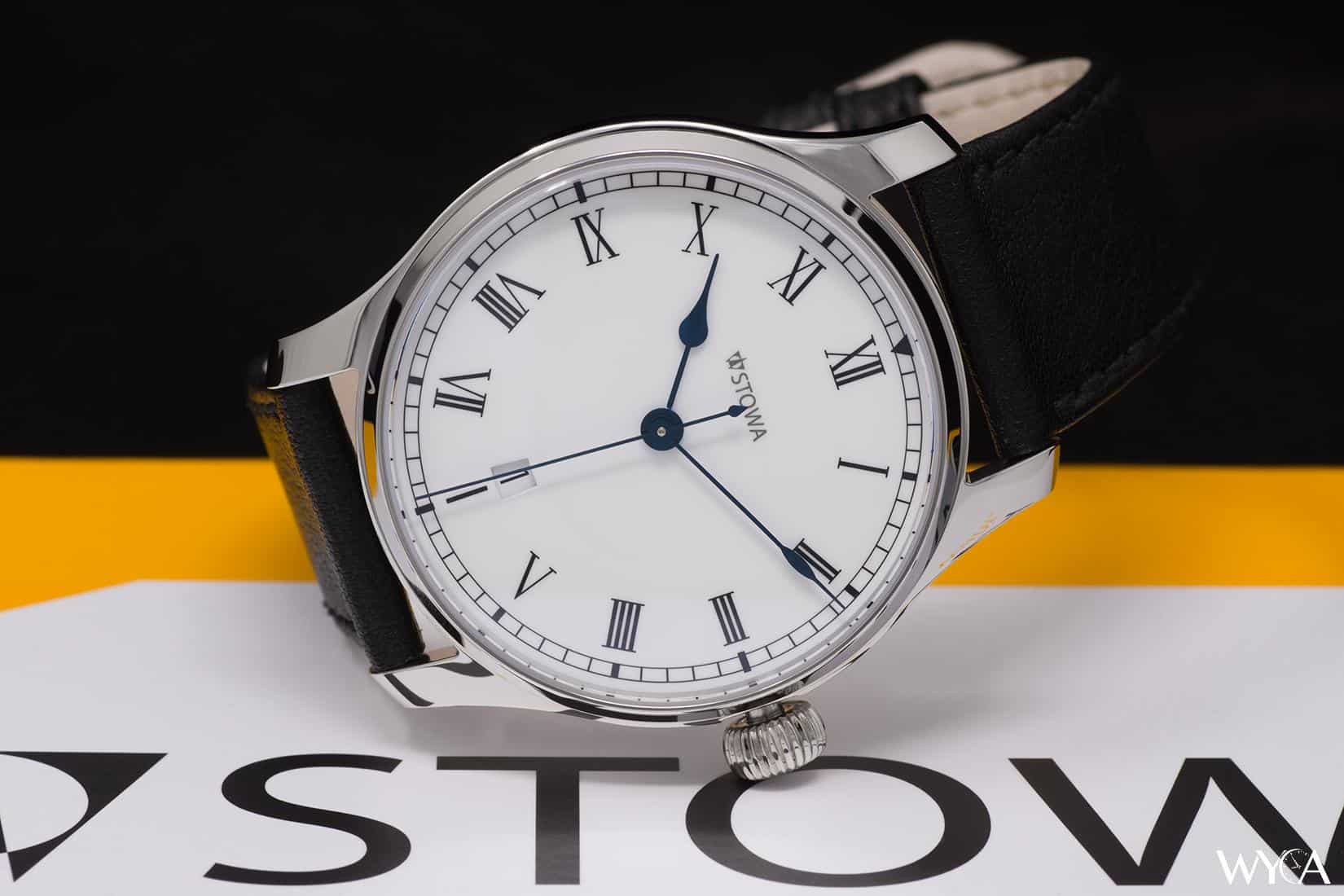 The Marine Klassik 40 is One of Stowa’s Best-Selling Timepieces.

And for good reason. A semi-customizable watch, the Marine Klassik 40 gives its owners choice with respect to which movement powers it. The base model, coming in at roughly $650 USD, is powered by an ETA 2824-2; opting to upgrade introduces both the top-finish ETA 2824-2 (+$130), a limited-edition model with an ETA 2892, or a hand-wound ETA 2804-2 (+300). All versions are made by hand and come with fine finishing- traits Stowa is known for.

All versions of the Marine Klassik come with sapphire and an exhibition caseback. The one I have here looks fantastic, and I suspect it’d only be better with the hand-wound 2804-2 inside.

Founded in 1927, Stowa is 91 years old this year and has a deep history producing pocket watches, Bauhaus design-inspired timepieces, dress, dive, and pilot watches. Auke reviewed the Partitio a couple of years back, and his warm regards for the brand are echoed by my experiences with the Marine Klassik.

Disclosure: Stowa provided this Marine Klassik 40 at no-cost for this review. 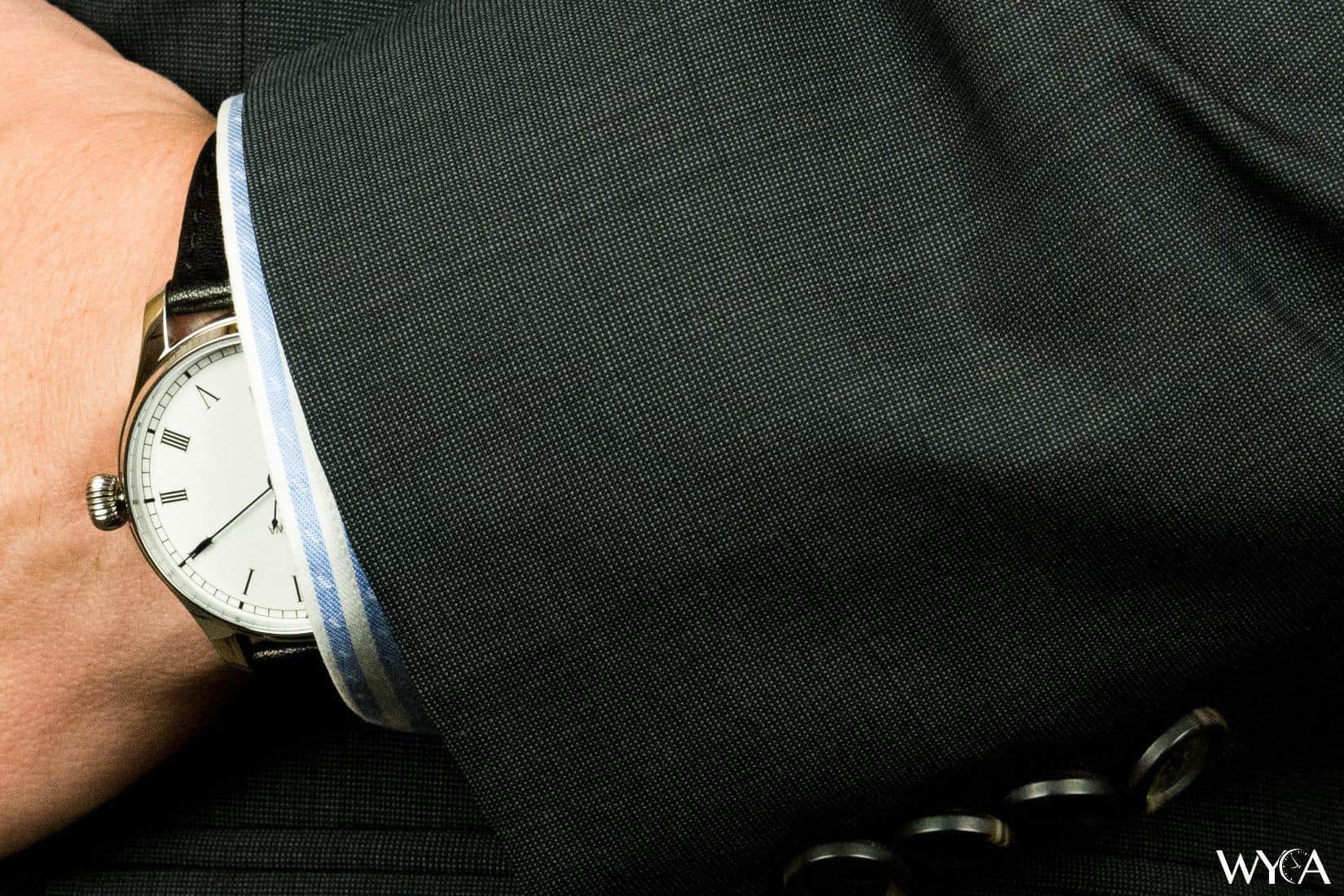 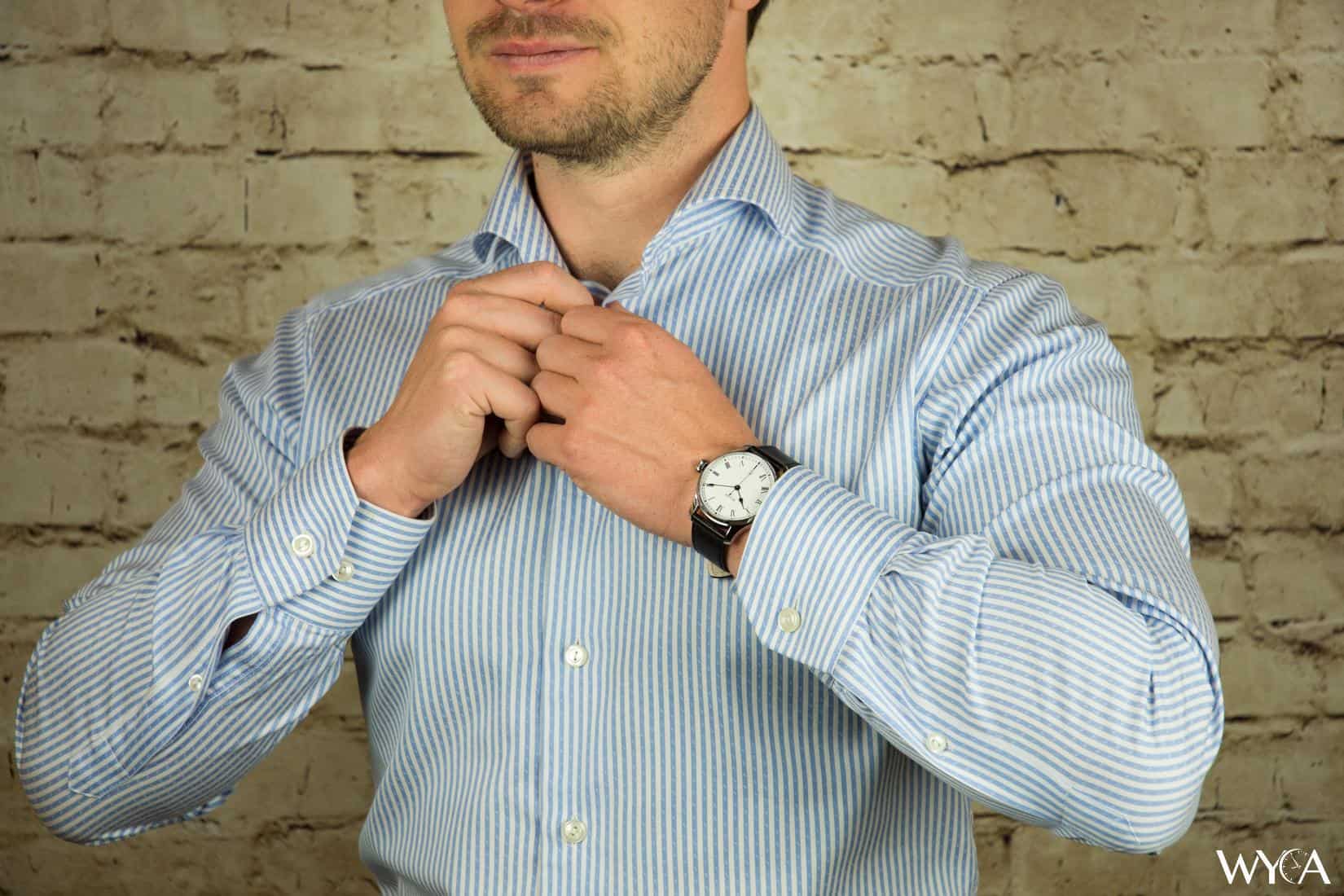 In 1927, Stowa was founded by Walter Storz in Hornberg, Black Forest, Germany. Throughout the 1930s, Stowa introduced several Bauhaus styled timepieces in both round and rectangular cases- stunning designs that still hold up today.

In the 1940s, Stowa releases their Fliegeruhren (Pilot) watches, with movements that exceed chronometer standards. Throughout the war they remained focused on wristwatch production, ultimately being forced to move buildings in 1945 when their Bismarckstraße factory is destroyed during an allied bombing run. They moved to Rheinfelden later that year.

In the decades that followed, Stowa remained steadfast in their production of mechanical wrist and pocket watches. In the early 2000s, Stowa began releasing updated versions of historical models and design methodologies, including the Partitio and Antea. The Marine Klassik 40 is another of these re-issues. 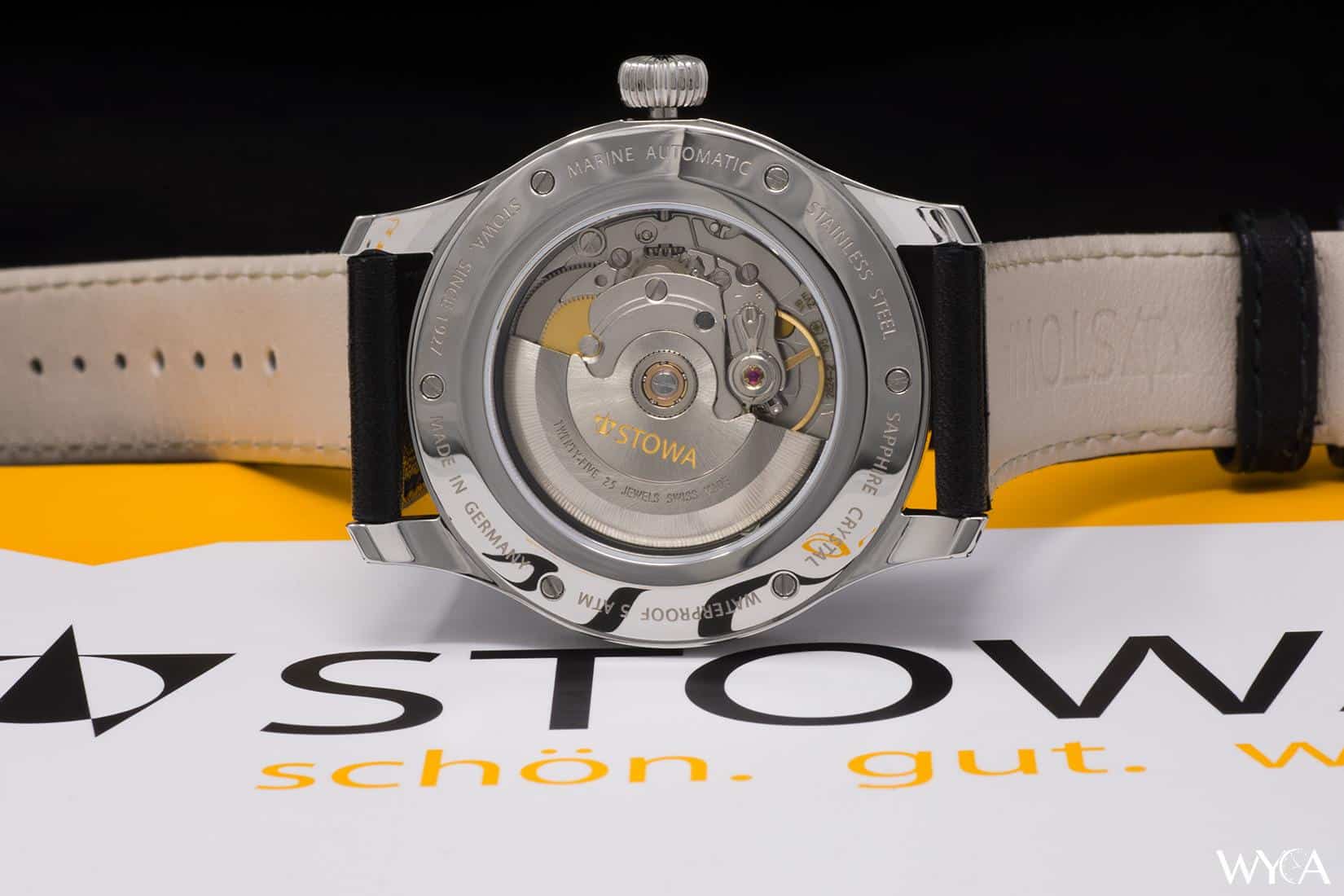 The Marine Klassik can be had with your choice of several Swiss-made ETA movements. This example is the Marine Klassik in its base form, powered by the ETA 2824-2. However, you can opt for something more high end (or handwound) should you prefer. Were I to purchase a Klassik, I’d opt for the hand-wound ETA 2804-2.

The base model equipped with the ETA 2824-2 is about $650 (may vary depending on the exchange rate). The ETA 2824-2 is a robust and reliable movement and is one of the most ubiquitous Swiss-made automatic movements available today. Its use is perfectly appropriate in the Marine Klassik, especially considering its entry-level luxury pricing. 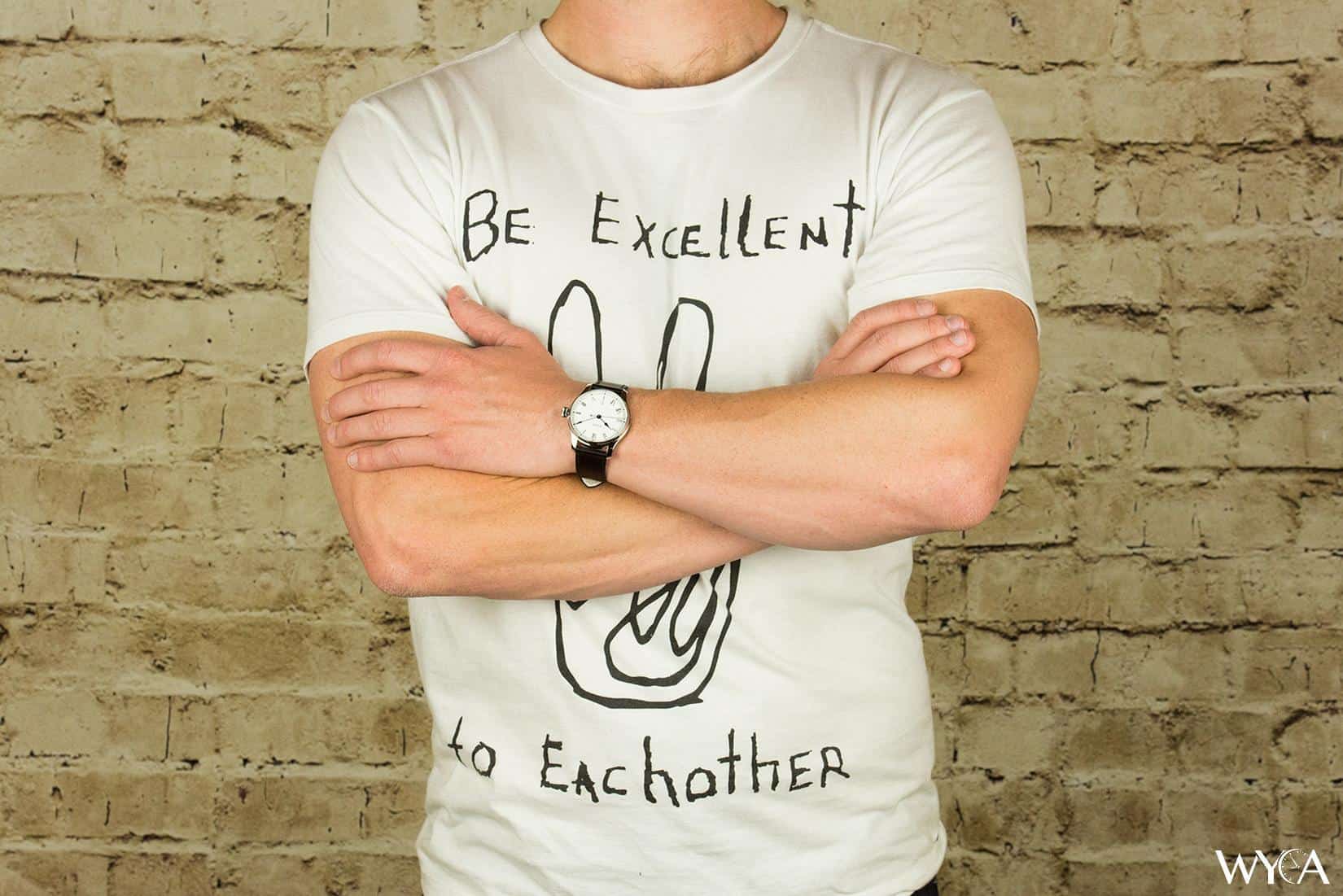 Regardless of the movement found within, you’ll enjoy a comfortable watch that sits nicely on the wrist. It’s easy to wear thanks to classic styling and tasteful 40mm case size. The ion-blue hands provide a bit of contrast against the white and black case, giving the eye a break from the otherwise monochromatic aesthetic.

The conservative style of the Marine Klassik fits well with nearly any outfit, from upscale dress to jeans and a t-shirt. It is inoffensive and reserved, feeling appropriate for any occasion. Interestingly, Stowa opted to use a single I at 6 o’clock vs the traditional Roman numeral VI. A subtle but noticeable style distinction compared to similarly styled watches.

It just 9.2mm tall, the Marine Klassik 40 is also quite thin. It feels and wears more like a companion on the wrist as opposed to a focal point. I quite like its versatility and appreciate its quality. A fair price, sufficient waterproofing, and the sapphire crystal make the Markine Klassik an excellent daily wearer. 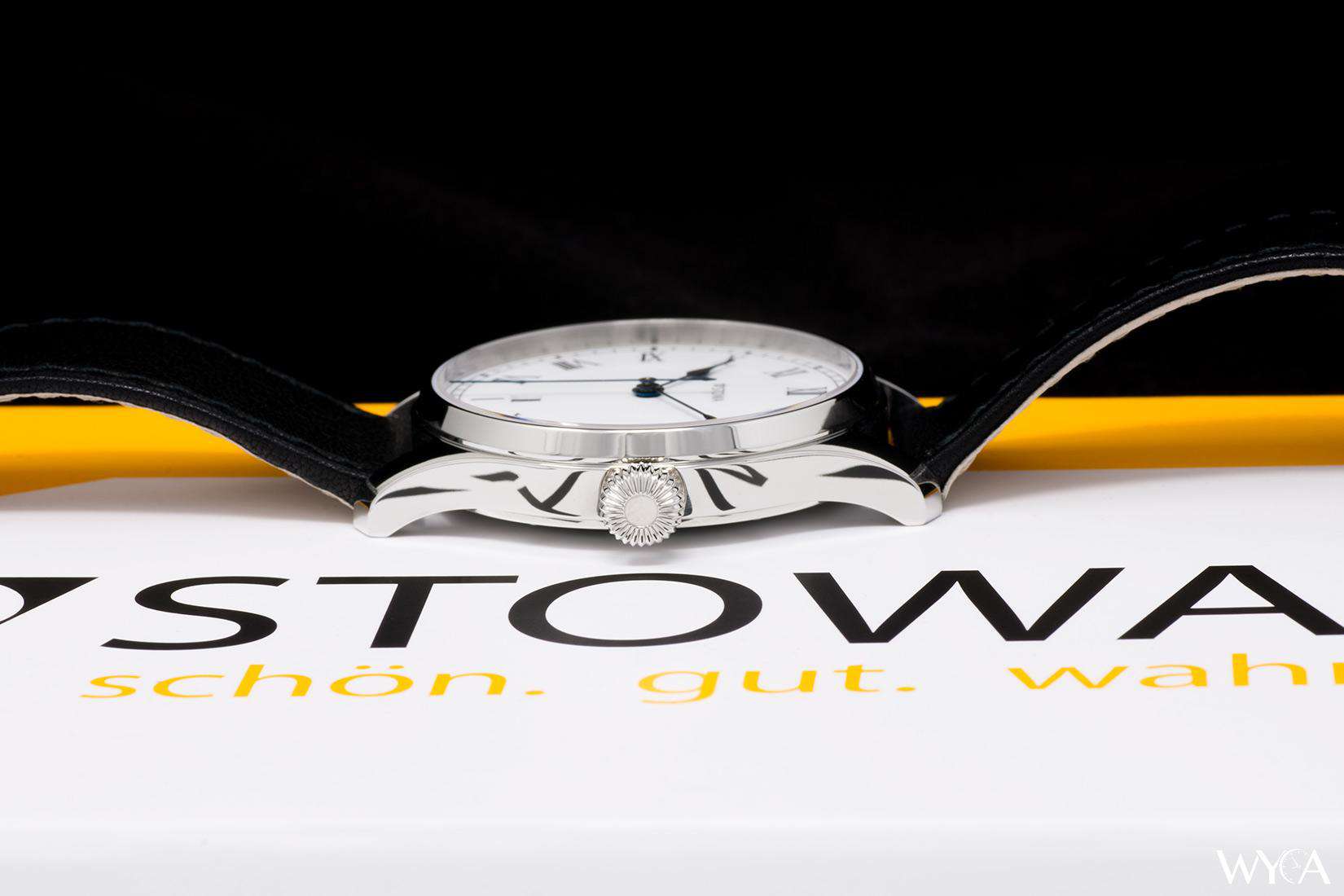 German Made and Swiss-Powered: What’s Not to Appreciate?

We’ve only reviewed a handful of German-made watches hands on, including a dual-time Zeppelin, DuFa Aalto Regulator, and the Stowa Partitio. The Marine Klassik shows the same qualities that we enjoyed about the other German-made watches we’ve reviewed: excellent craftsmanship, good quality materials, and both of those things offered at a fair price. The Marine Klassik is more simple and restrained compared to the other Germans we’ve tested. 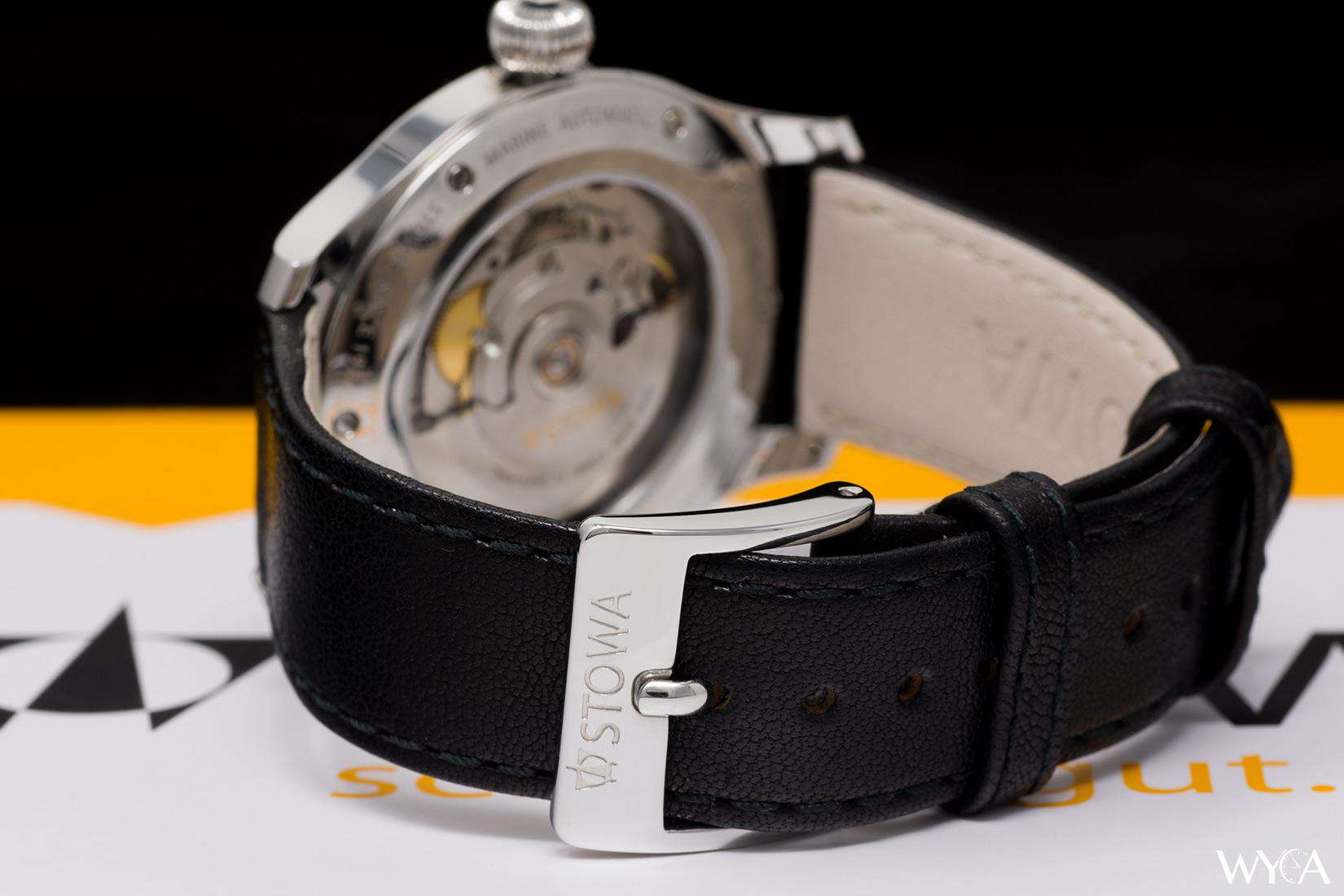 While simple, the Marine Klassik is far from boring. The details are given the attention they deserve, including a beautiful crown, an attractive black leather strap (embossed on the underside with “Stowa” and “Since 1927”), and an engraved stainless-steel buckle. The date window is also unique, though it’d take a trained eye to see what makes it so- I won’t spoil it for you. 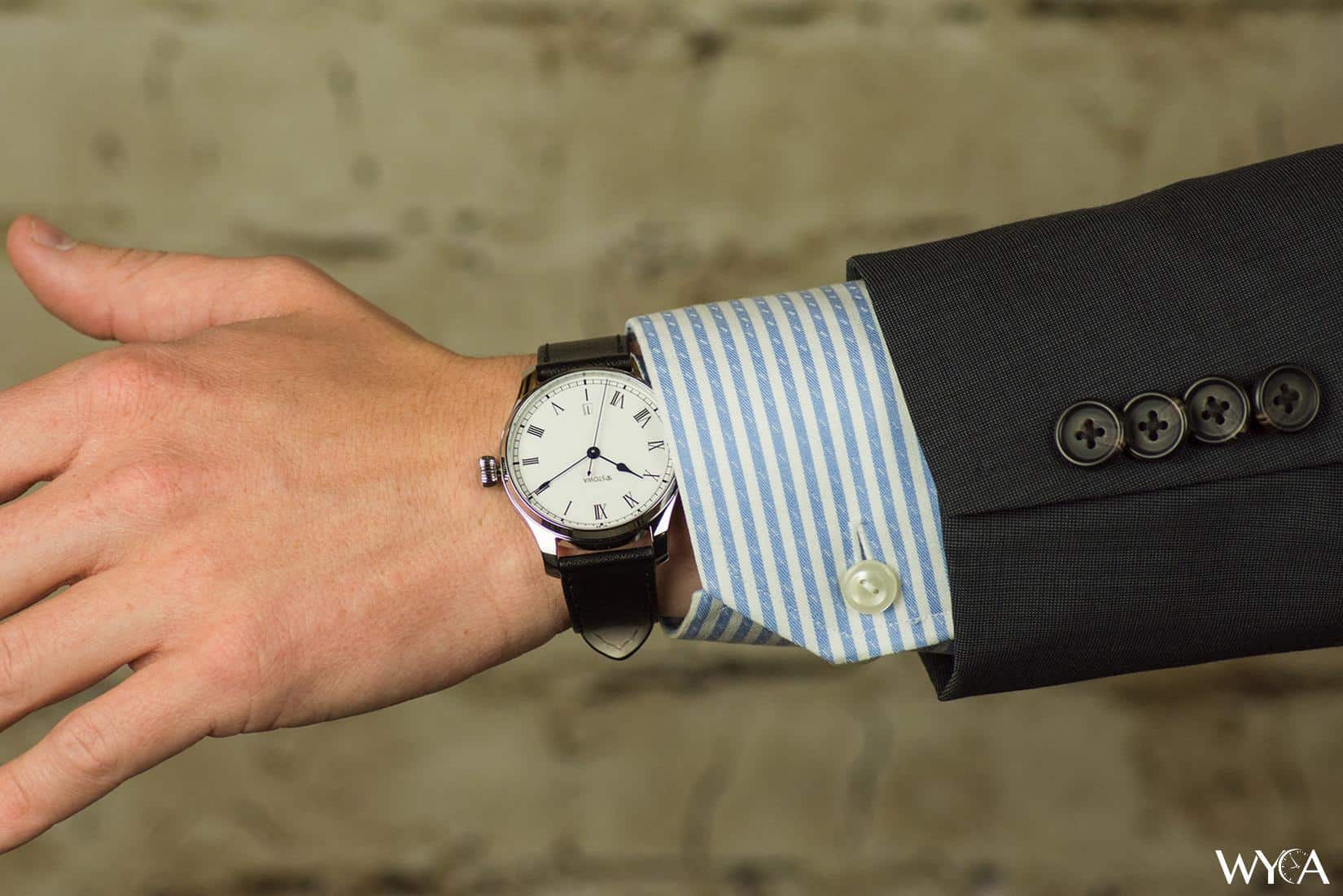 For those looking to spend between $500 and $1,000 on a new timepiece, there is no shortage of quality options. Numerous Hamilton’s and Tissot’s, some using the same movement as the Stowa, would be fitting choices for that budget. But, so would this Stowa… and the Stowa would be more unique and interesting by comparison.

While competitive entry-level luxe brands are found in every shopping mall and online retailer, Stowa remains an independent brand that sells their timepieces direct from their website. Odds are that you won’t find another person wearing a Stowa, even at a watch enthusiast gathering, and there’s something to be said about that.

Then consider the great build quality, customization options, and history of the brand. This Stowa has a story to tell that is unique compared to its peers and, for someone that appreciates history, has the horological chops to match.

Were I in the market for a versatile and conservatively-styled automatic, the Marine Klassik 40 – in Roman White – would be on my radar… but I’d get the hand-wound version.