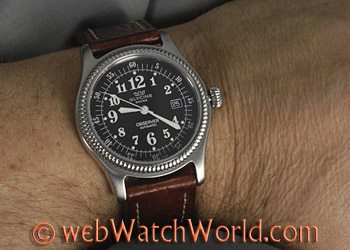 Summary:  A flieger-style watch with an easy-to-read face, classic proportions and the workhorse ETA 2824-2 movement for reliability and accuracy. 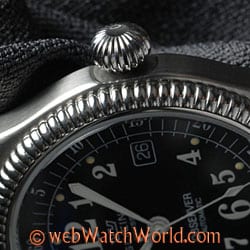 The Glycine Observer is a difficult-to-find wristwatch. It is made in Switzerland in the “flieger” (German for ‘airman’) style. Flieger watches are so-named from the styling given to the German watches of the mid-20th Century.

Flieger watches were originally designed to be utilitarian timepieces for aviation duties. One of the most important criteria for this type of watch was outstanding readability. A cramped and sometimes dark cockpit and precise navigation depended upon an accurate and easy-to-read watch for the pilot and navigator to get the job done without error.

The Glycine Observer is more or less in the flieger style; a true flieger watch is probably more commonly known as the “B-Uhren” type (‘Beobachtungs uhren’ or ‘monitoring watch’). These watches are still being made by some of the more famous watch manufacturers, including IWC and Laco, among others, and they are popular with watch collectors. 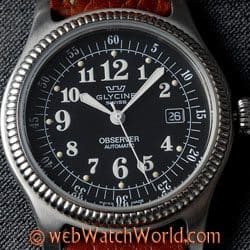 But the Observer is nicely styled and reminiscent of the period, with its serif-font numbers and retro-look seconds, minute and hour hands. The styling is a perfect cross between dress and sporty and the thinness of this watch means that it’s easy to wear under any type of dress shirt.

Note that Glycine also makes the Observer with the word “Luftwaffe” in place of “Observer” seen on this watch. I don’t know why or how many of each were made, but I prefer the Observer over the Luftwaffe version, which may have negative connotations to some.

A few features to note on the face of the Glycine Observer are the numbers, which in addition to the old-style serif font, have the 6, 9 and 12 in a slightly larger font size than the rest. The seconds are counted off by fives around the outer edge of the face, which also helps to make the watch useful for timing. This is a great watch to have in a business meeting, because it’s easy to quickly glance at the time without anyone catching on!

The Observer comes with a thick metal watch band with small metal ends that fill in the 22 mm gap between the springbars and the watch case. Glycine also included their standard black leather band with white stitching which, in typical Glycine fashion, is a bit crude for a watch of this type I think.

I put it on this nice, thick brown leather strap, which I particularly like because it has sealed edges. The white stitching on this strap is perfectly applied and offers a strong contrast to the reddish-brown hue. The 22 mm lug width means that it is very easy to find a watch strap to suit your style or preference.

The Glycine Observer: Size and Weight 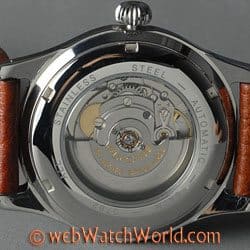 The authentic flieger watches — or some of them, anyway — are among the largest watches to be found, with diameters up to 58 mm. Most of the everyday wear watches of 10 years ago and beyond were much smaller than the average watch of today, but the Glycine Observer is a hybrid in this regard; it has the retro styling but a healthy (and modern) 42 mm across.

The watch is also a very reasonable 10.7 mm thick from the back to its flat mineral glass crystal. The flatness of the crystal also helps with visibility because it doesn’t reflect indirect light.

The Observer weighs just 78 grams with its leather strap as seen in the photos, but the watch feels solid and for anyone with about a 6.75″ wrist circumference or more, the watch disappears into the background. 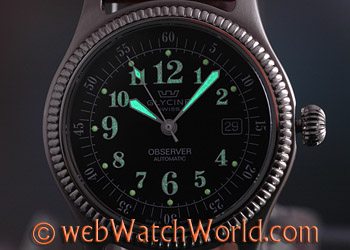 I purchased the watch second-hand, so I can’t tell how well the lume performed when it was new. But there’s no reason why it shouldn’t have been just as good as any other modern watch. The lume seems to be fading a bit, as you can see in the photo below, which doesn’t bother me a bit because lume and tritium tubes have never performed for me in a way that is meaningful anyway.

I suppose it could be re-lumed if desired, but I would never allow someone to touch the numbers, because I’d be afraid of ruining the beautiful font.

The watch fits nicely on my 7.25″ wrist, as seen in the photo below on the right. The leather strap was new in that photo, so it’s a bit stiff, and I haven’t worn it much since, so the strap is still barely broken in.

The ETA 2824-2 movement used by Glycine in the Observer is your basic, all-around ubiquitous high-quality Swiss movement, used in literally thousands of different watch brands and types. It has typical 2824 accuracy; that is, around 4 to 6 seconds per day, give or take.

The watch hacks, of course, so resetting it every morning is a cinch. Pull out the beautiful onion-style crown to the first stop and the date quick-sets; pull it out to the second stop to set the hands. The clean delineation of the numbers also allows a very precise setting of the hands, which is an obsession with me.

Glycine does a typically nice job of finishing the movement and the gold-painted lettering on the eccentric winding weight are a nice touch, as is the “Côtes de Genève” finish. The movement has 25 jewels and a claimed 38 hour reserve time, although I wind my watch every morning when I’m wearing it, so I have no idea if that claim is true or not.

Of course, the jet-black backgound and white numbering and hands make the Glycine Observer an extremely easy watch to read — and photograph!

Any extraneous light is “absorbed” by the black background and you can see in the video above how nice it all looks and how easy it is to read. This is a true classic design that will never go out of style.

The Observer is a very difficult watch to find brand new, although Glycine still carries it in their current inventory listing with reference number 3781.

Used Observers in good condition seem to be running around $600.00 USD or so and nice examples occasionally come up for sale.

The Glycine Observer is a modern version of the flieger watch style, with an up-to-date ETA movement and stainless steel case.

It’s accurate, good-looking and, with just about any leather strap or its stainless steel bracelet, makes a nice addition to any collection.