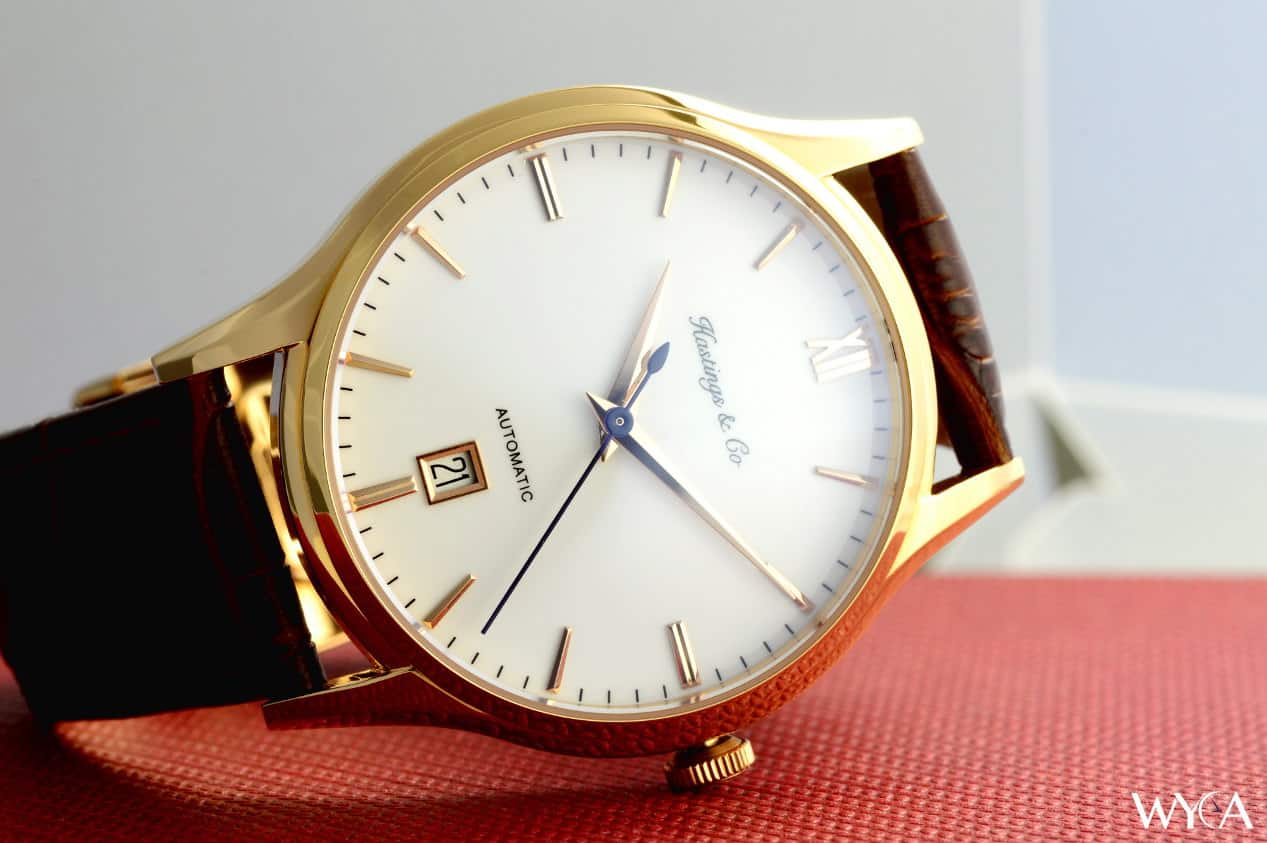 It has occurred to me that writing a review of a watch not yet in production could come across as premature, yet I am writing it just the same. As an indication of things to come, the Heritage Edition’s prototype serves its purpose: it showcases the carefully considered design in the quality of materials chosen, and for the most part, the quality of its manufacture as well.

In most respects, the Heritage Edition doesn’t feel premature at all. I suppose that’s why this review seems appropriate to pen, as I think I know where this story is going and I know that it’s going to be a good one. 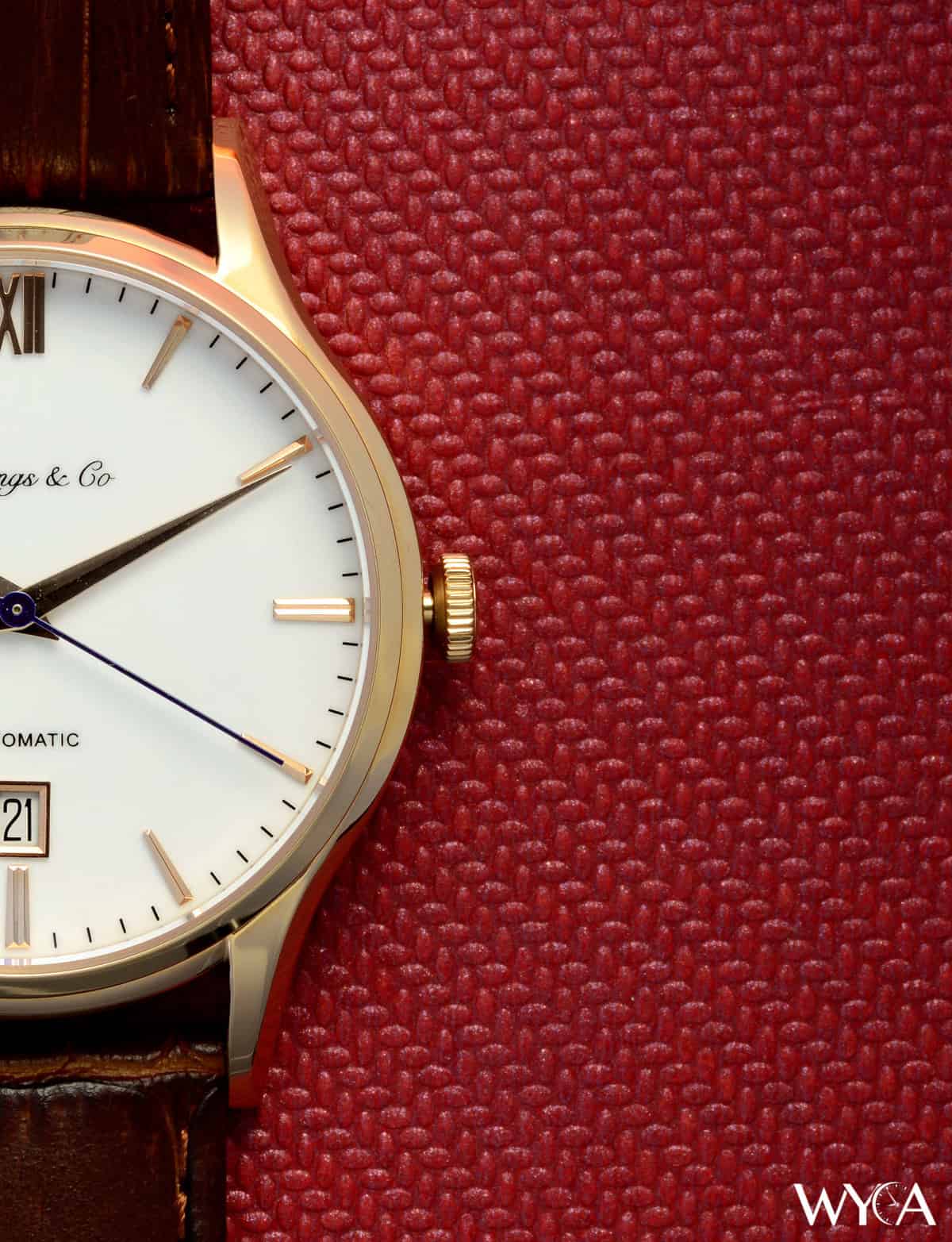 First, Remember That This Heritage Edition Is a Pre-Production Model

This Heritage Edition Isn’t Ready for Production, But It’s Close

In almost every respect, the pre-production version is the production model. However, there are two important distinctions that will separate the two:

Looking at the dial, it’s impossible not to notice some prominent markings on all three of the hands as well as on various parts of the face. Under normal circumstances they are hardly noticeable, but when viewed in high resolution from behind a 90mm macro lens, they are all too obvious.

Mark Ang, founder of Hastings & Co., is well aware of these problems.

“When we received the samples, we weren’t crazy about the transition from the beautifully tapered, polished bezel into the flat crystal. So we had them changed to a domed crystal. This was not done in a controlled environment, and so we had some particles settle on the watch during this change. It was our mistake not to have them done in a well controlled environment, free of dust and other particles, but in the interest of time, we opted not to.”

Emphasis on the above quote mine.

I can forgive the small things on the dial simply because Mark’s explanation makes sense. In order to hit his Kickstarter commitments and to deliver on time as well  as change out a flat crystal for a domed one, we have a trade-off in some dust sitting on a prototype’s dial. That seems perfectly reasonable to me.

Besides, the Heritage Edition is covered by the same two-year warranty Hastings & Co. backs its current offerings with, and a big part of that warranty speaks to being free of material defects. 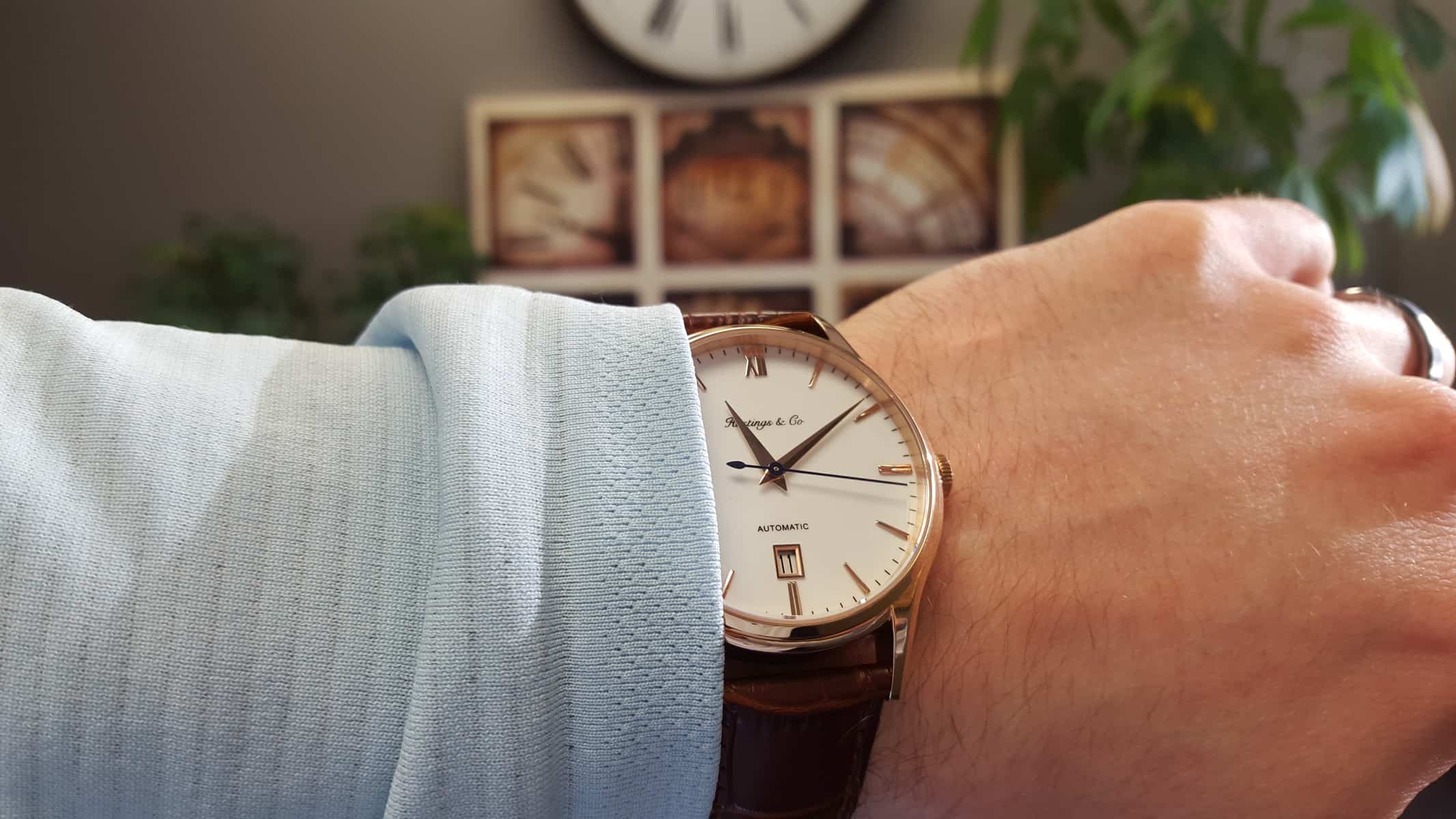 The Heritage Edition Presents Itself Well Above Its $300 MSRP

In fact, the Heritage Edition looks better than just about every comparable watch I can think of in this price range. It’s a stunner, from its highly polished rose gold case to the classically-inspired rose gold hour markers.

Like the case, the engraved butterfly deployment clasp is also done in rose gold. It’s a beautiful addition, though its inclusion was due to purposeful demand as opposed to aesthetic value.

“We also wanted to preserve the leather [strap] and ensure it would age well over time. This is why we’ve used butterfly deployment clasps,” says Ang.

“We opted to use Italian leather straps for a simple reason: you are in constant contact with it. Using a leather strap that costs as much as some designer brand watches cost to make was a prerequisite for us… you have a sophisticated mechanism that preserves the leather, comes off with ease, and makes you feel like you’re wearing a watch worth way more than you paid for it.” 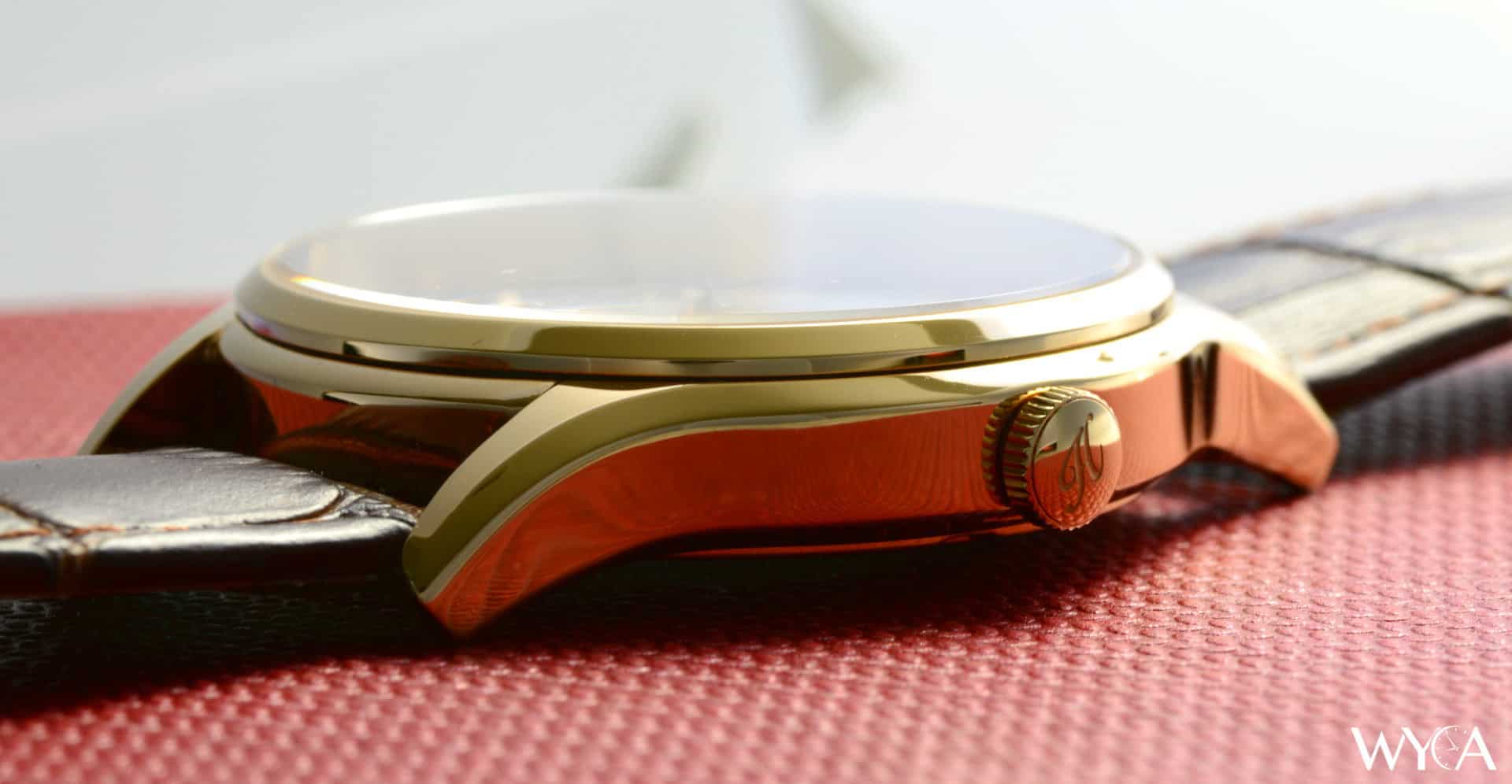 Hastings & Co. Has Nailed the Details

In order for a watch to really shine, it has to have its own presence. It can’t feel like any other watch, else it’s just another option in a drawer full of options.

The crown is eloquently engraved, as is the deployment clasp. The two match the dial, which itself is traditionally conservative save for a blue seconds hand and the printed minute markers.  Every surface that matters is polished – almost to a mirror – and anywhere your eye can see has been presented. 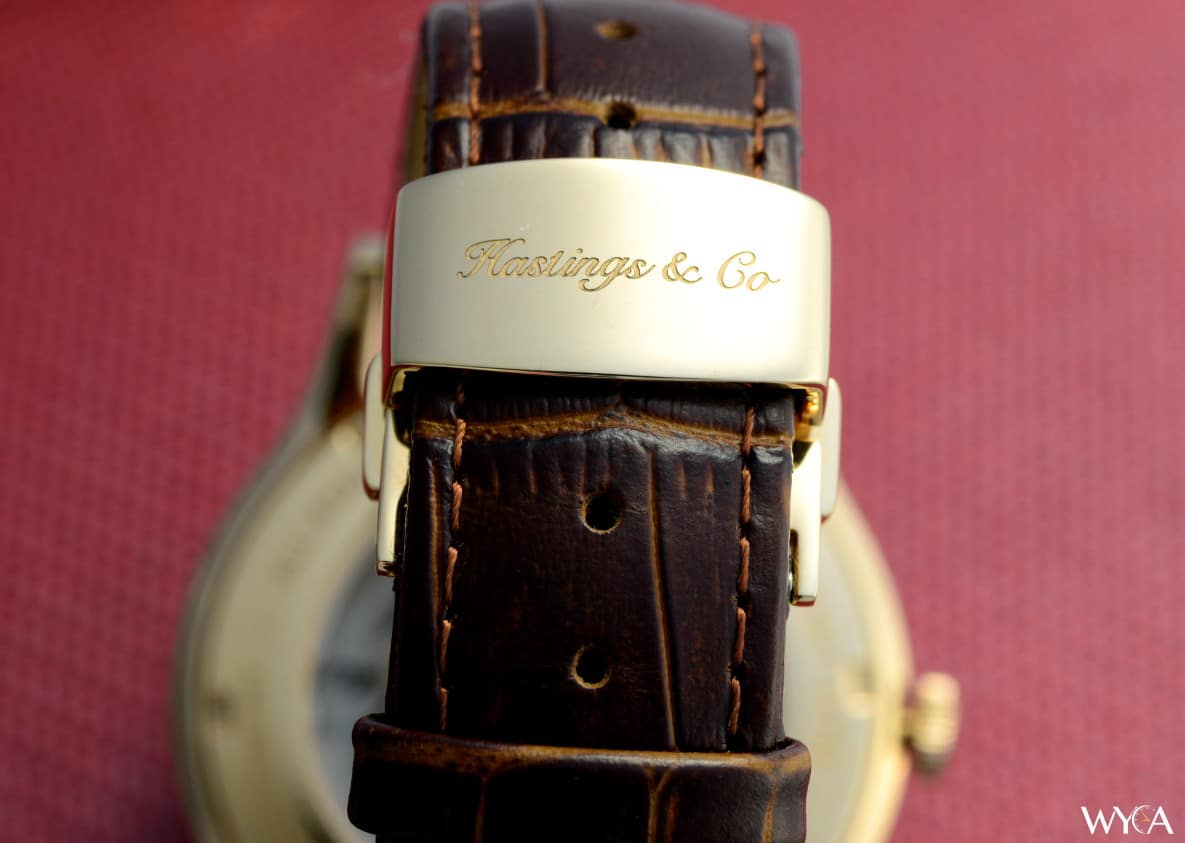 Sapphire glass protects the front and rear, which itself is also quite impressive to see for the price. To have a Japanese automatic, excellent materials with great finishes, and sapphire… well, that’s just not something you generally see for under $500.

If you back the Kickstarter, you can get one for under $300. Just a thought. 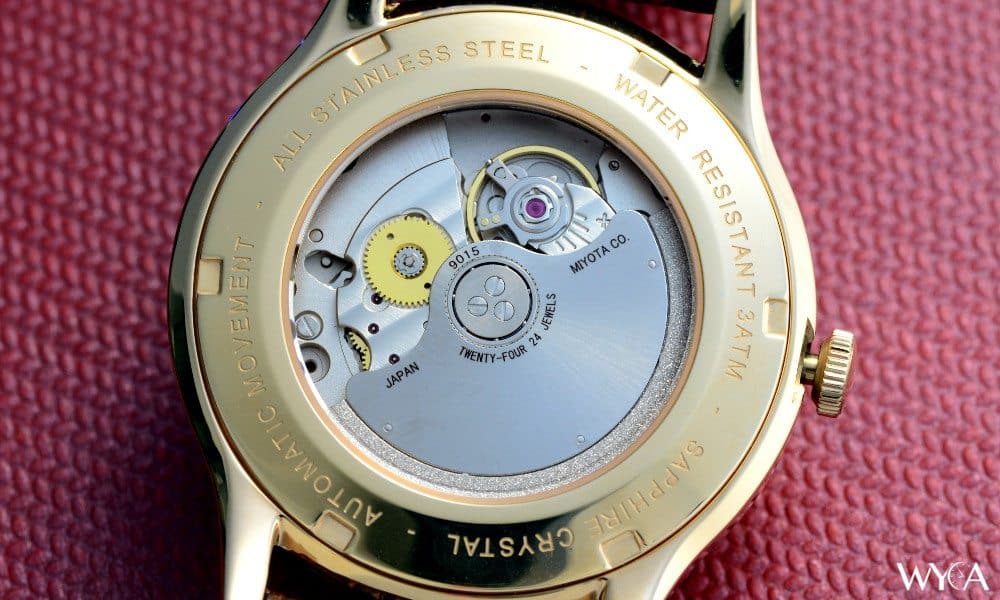