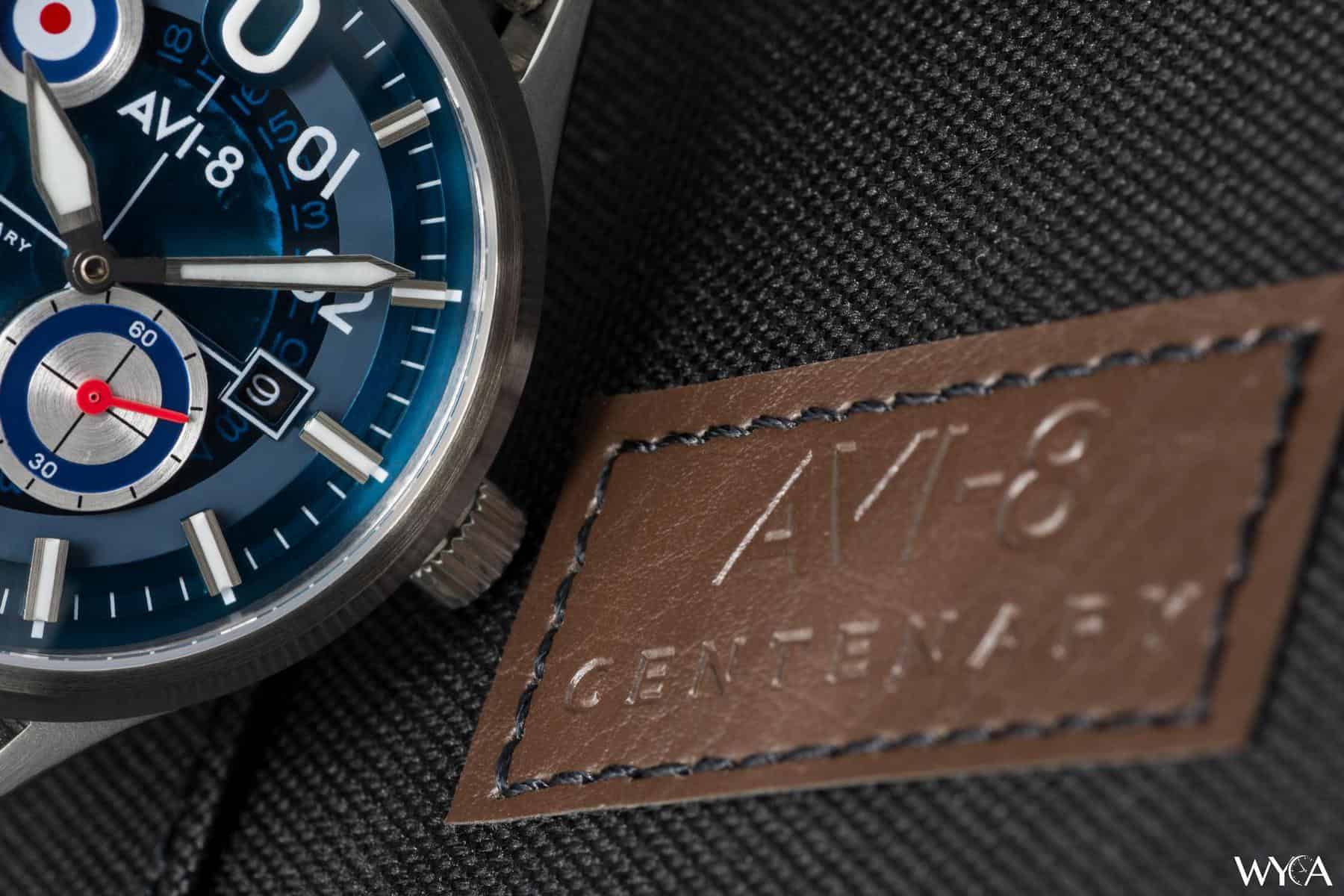 Avi-8 is one of my favorite little/big watch brands because of how on-point their watches are thematically. Avi-8 embodies the aviation watch in fun and sometimes over the top ways. Their latest – the Flyboy Centenary edition – is a great example of that.

The first (and only) Avi-8 watch I have reviewed prior to this one was the Hawker Hurricane– a quartz-powered chronograph that I quite liked. It’s been a while since I’ve worn an Avi-8 – about two years or so, as I gave the Hurricane to a WYCA reader – so I was excited to get my hands on the new Flyboy Centenary 1960s AV-4060.

The sister watch, the 1980s AV-4061, is definitely all ’80s in its style but otherwise uses the same movement and materials as the 1960s. The Flyboy Centenary is powered by a Miyota 8218 automatic movement, is fixed with sapphire, and this particular version features a semi-translucent blue dial.

Disclosure: Avi-8 provided the Centenary to me at no-cost for the purposes of this review.

The AV-4060-02 is the most outgoing of the three 1960s models. The other two – green dial/tan strap and black dial/brown strap – are somewhat more reserved. This one, with its very blue dial, practically jumps off the wrist.

This is compounded by the inner dial, which is semi-translucent and shows off some of the jewels and mechanical underpinnings. This contrasts against the flat and brushed surrounding sections, which vary in texture and depth. All the dial, save for the hour markers, hands, and choice steel accents, is a shade of blue.

The design looks spectacular behind a lens, where the lighting can be dialed-in to emphasize the palette and really make the watch pop. 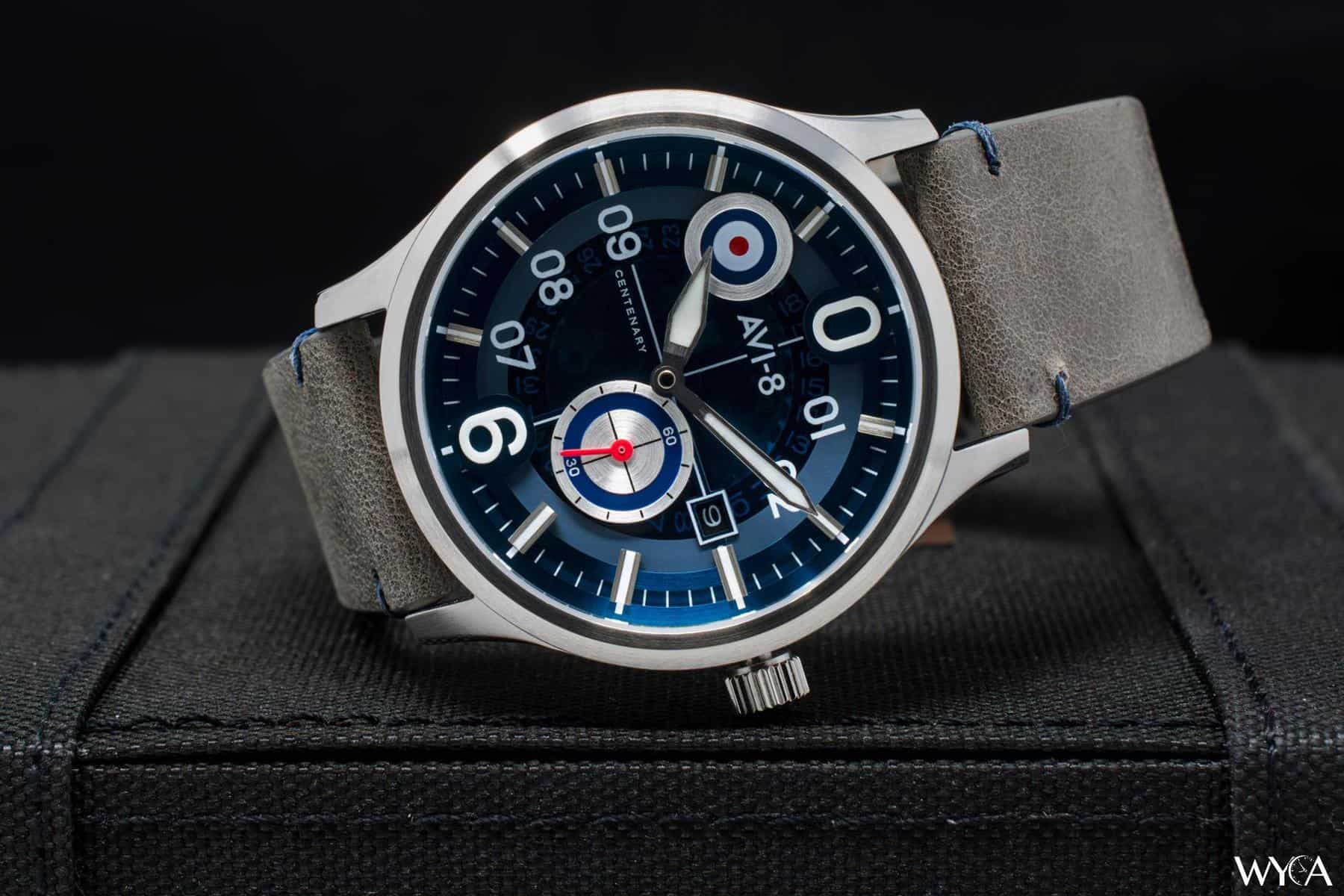 The Centenary is sized at 43mm, which by default makes it a pretty noticeable addition to the wrist. The size amplifies the dial, making it easy for your eye to notice all the elements that are on display.

The inner dial is showcasing views of the movement. This includes the datewheel, which uses the blue-tinted dial to turn the numbers into an effective border accent. The date window is untinted, emphasizing the date itself in white on a dark background.

The 4:30 small seconds subdial works, but the 10:30 “subdial” is just for show.  Both are ringed and accented with a brushed steel texture, which is also applied to the hour markers and hands.

There’s definitely a lot going on here, but unless you’re looking at the Flyboy under direct light, the inner-dial accents won’t be nearly as visible as the hands, subdials, and hour markers. 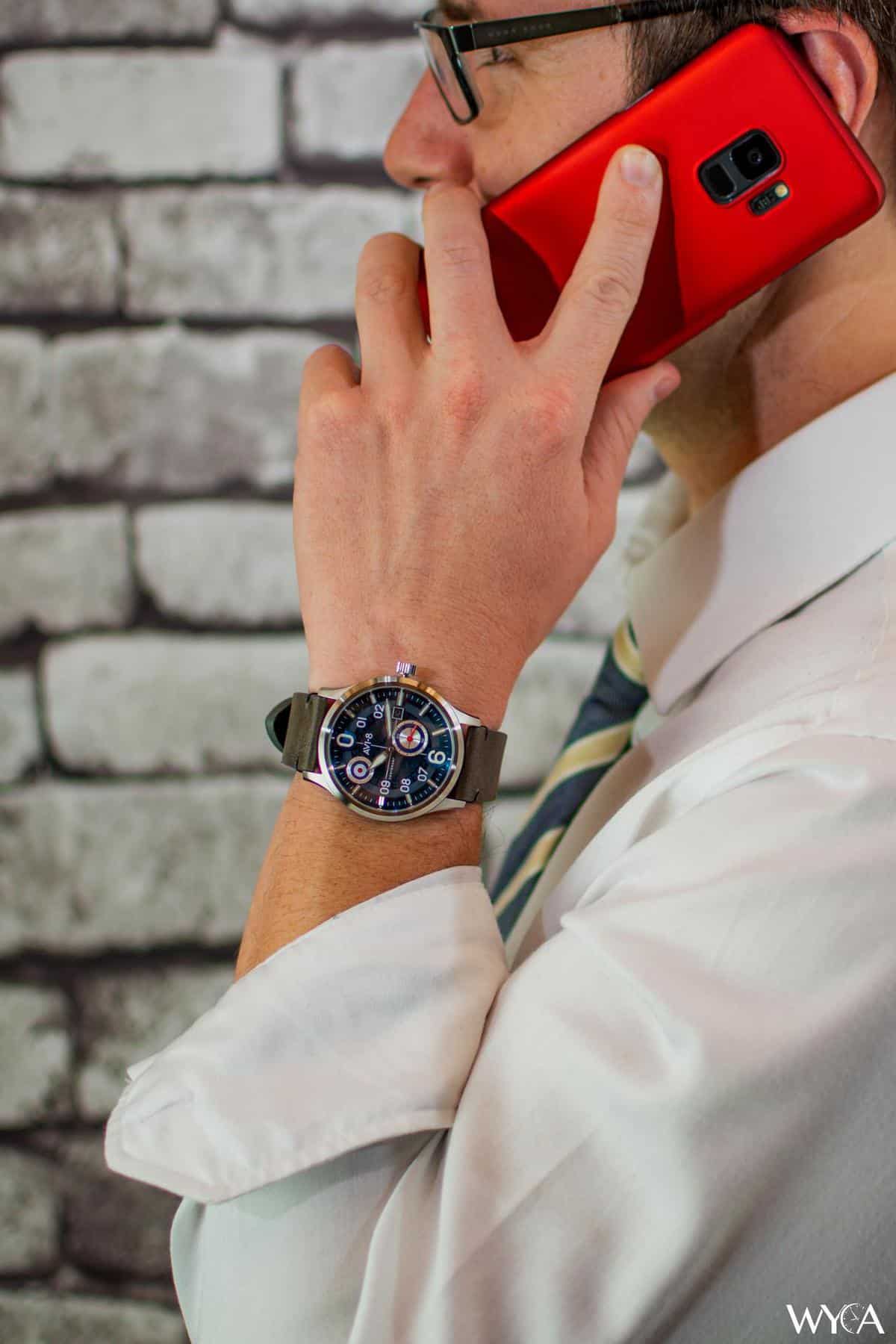 Thank You For Supporting WYCA

WatchesYouCanAfford.com is monetized via contextual advertising (ie- Google AdSense ads) and affiliate relationships. We are affiliate partners with Amazon and Certified Watch Store.

We strive to be a reliable source of unbiased reviews. We do not and have never accepted compensation in exchange for a good review. Our goal is to showcase watches worth your hard-earned money. All the reviews on WYCA were done hands-on, with most of the watches being purchased by us for the purposes of review.

Over the years we have heavily invested in photography equipment and software to improve the quality of our website and media.

Thanks to the support of our readers, we will continue to invest in improving the quality of our content. Thank you for reading! 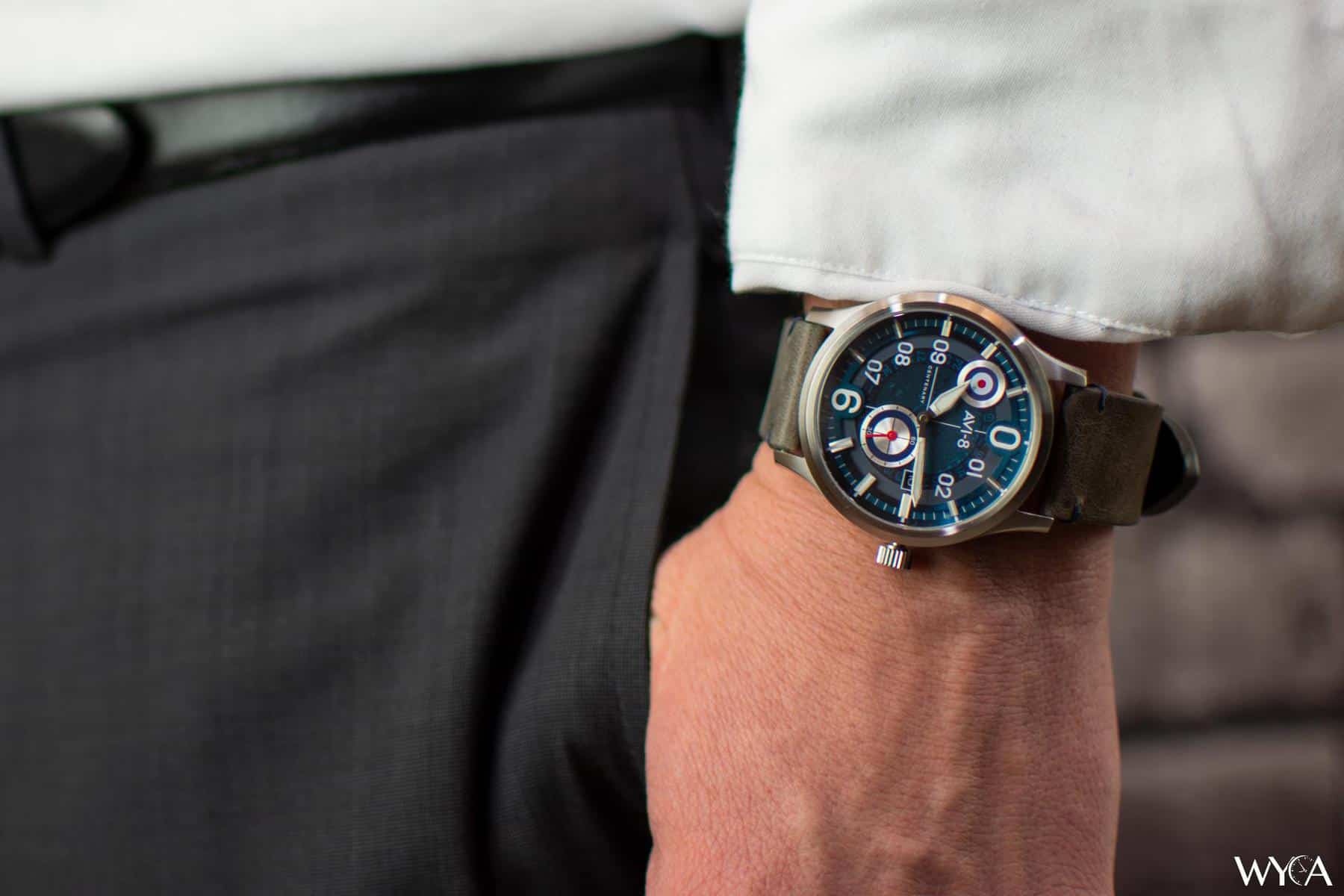 Made to Celebrate 100 Years of the RAF

The RAF Roundel is used on the Flyboy Centenary to call to mind the post-war advancement that the British Royal Air Force underwent. This distant post-war period saw the rapid inclusion of new game-changing technologies well as the incorporation of nuclear deterrents into the air force.

The 1960s must have been a technological blur for those living in the thick of it. This decade saw the first-ever communications and weather satellites launched into orbit, the rapid expansion of the American and Soviet space programs, the ushering in of civilian-powered jet airlines, and of course, the July 1969 Apollo 11 moon landing.

For the RAF, the 1960s showcased several now-iconic aircraft: the Electric Lighting (the only British designed and built Mach 2 aircraft), the V Bombers (which reached their peak of 159 aircraft in service in 1964), the Hawker Hunter fighter-bomber (which some countries kept in service into the early 2000s), and the Harrier Jump Jet (perhaps the most iconic VTOL aircraft ever built).

Truly, it was an incredible time for British air capability.

How well something is made is important not just for quality’s sake, but because energy, materials, and expertise went into its creation. When things are made with care and attention, they last, giving them an enduring value that elevates them compared to their less robust peers. The above is essentially why many (most?) watch enthusiasts schluff off fashion brands, which are typically made to look great but fail to stand the test of time. 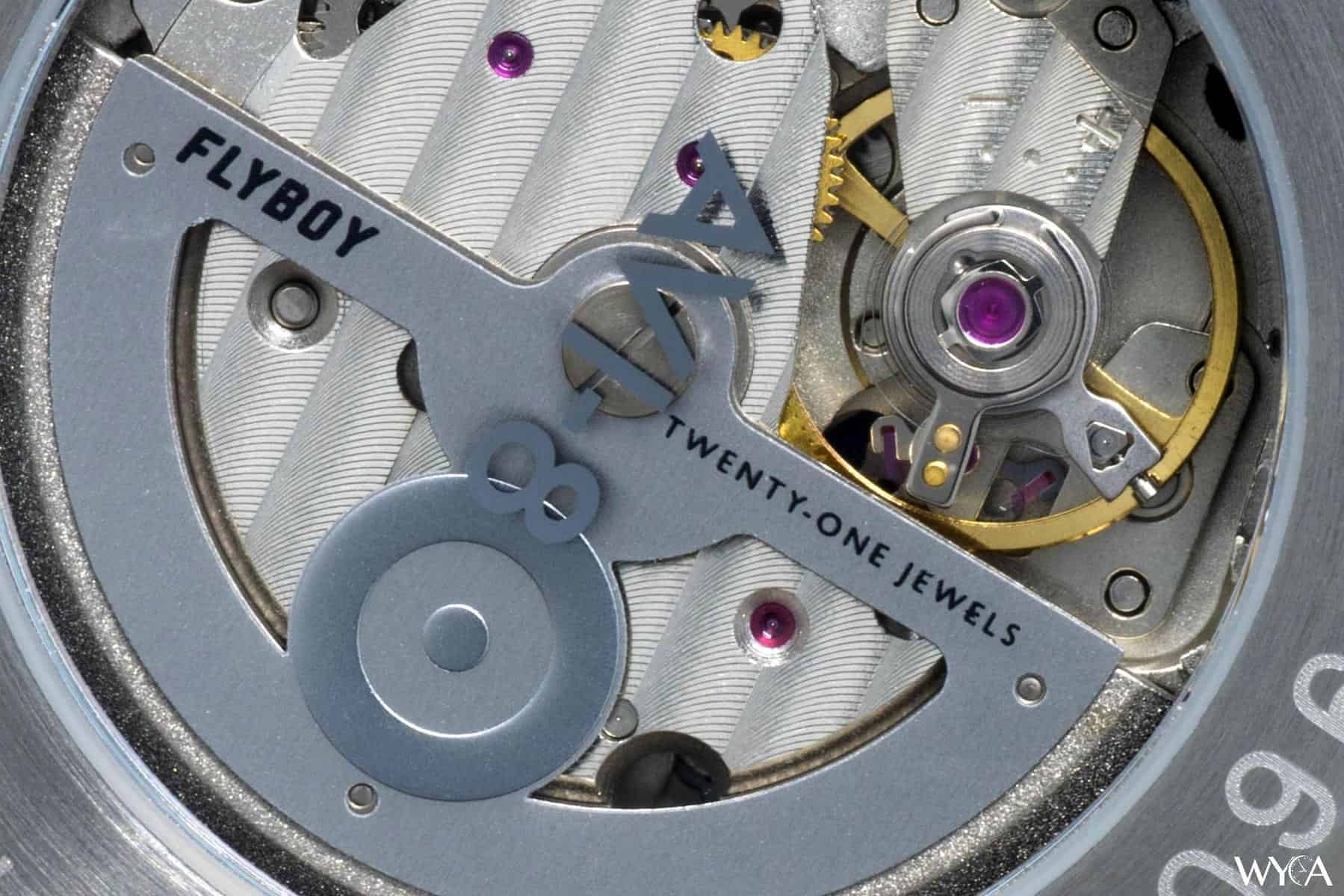 I’m not a watchmaker, so when I assess quality, I’m doing so from the perspectives available to me without cracking open the case and having a look inside.

The picture above is a good example of how I do that. I look for signs of poor manufacturing, such as misaligned hour markers, imperfections on indices/hands (scratches/scuffs are not uncommon, especially in value-priced watches), or machining defects in the dial, or dust underneath the crystal. As we can see using the ultra-zoomed in shot above, the Centenary 1960s doesn’t appear to suffer from any issues there. 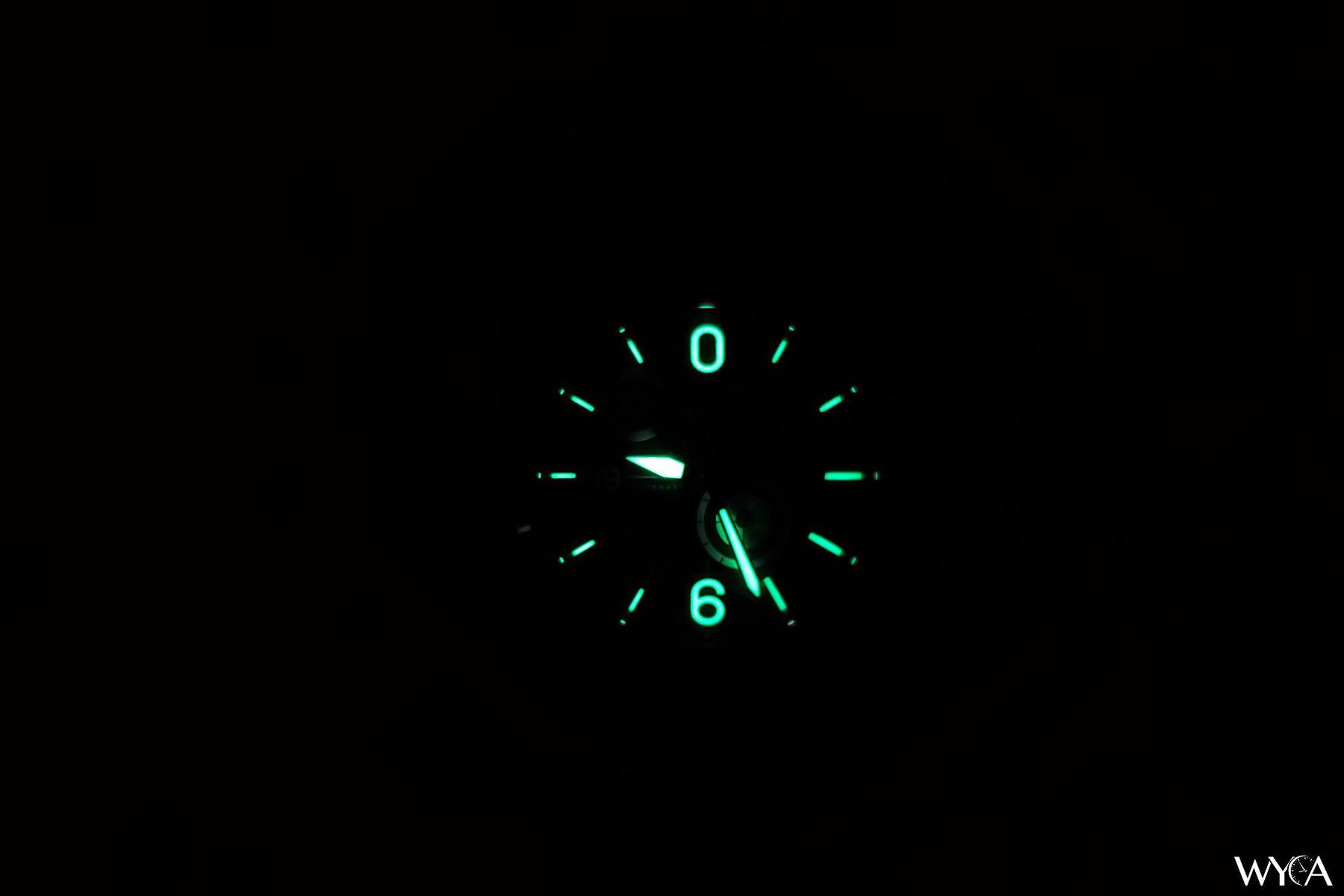 Conversely, when looking through the exhibition caseback, I look for signs that the movement is either poorly finished or poorly installed. Indicators would be physical damage to the movement itself (small scuffs/scratches or dents), signs of water or other liquids inside the case (either the liquid is physically present, or watermarks indicate that it once was), poorly lubricated jewels, damaged springs, etc. In the case of this particular Miyota 8218, aside from nearly imperceptible flaws in the finish of the balance wheel, the movement looks great. 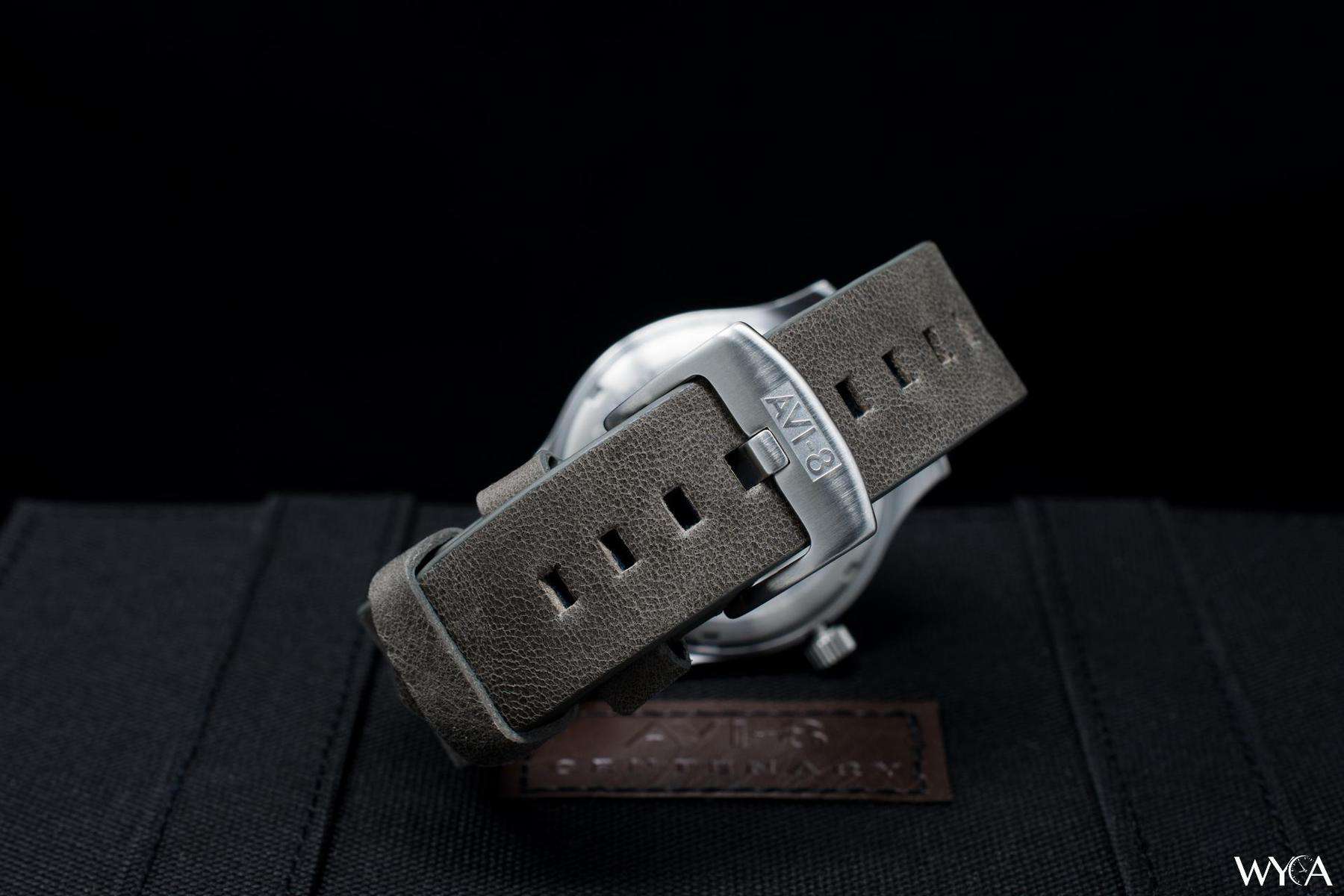 The Flyboy comes with a thick leather strap and steel buckle. Lug to lug width is 22mm, which combined with the 43mm case, makes for one big watch indeed. If you’ve got big arms/wrists, the sizable case/lugs won’t be a problem. But for me, the end result is a watch that’s definitely borderline “too big to wear”.

Both the strap and buckle are good quality. The strap is plush and quick to mold to your wrist. I can’t speak to long-term wear (as I’ve only been wearing the Flyboy for a few weeks), but so far the strap has done a good job resisting cracking in the wear areas. 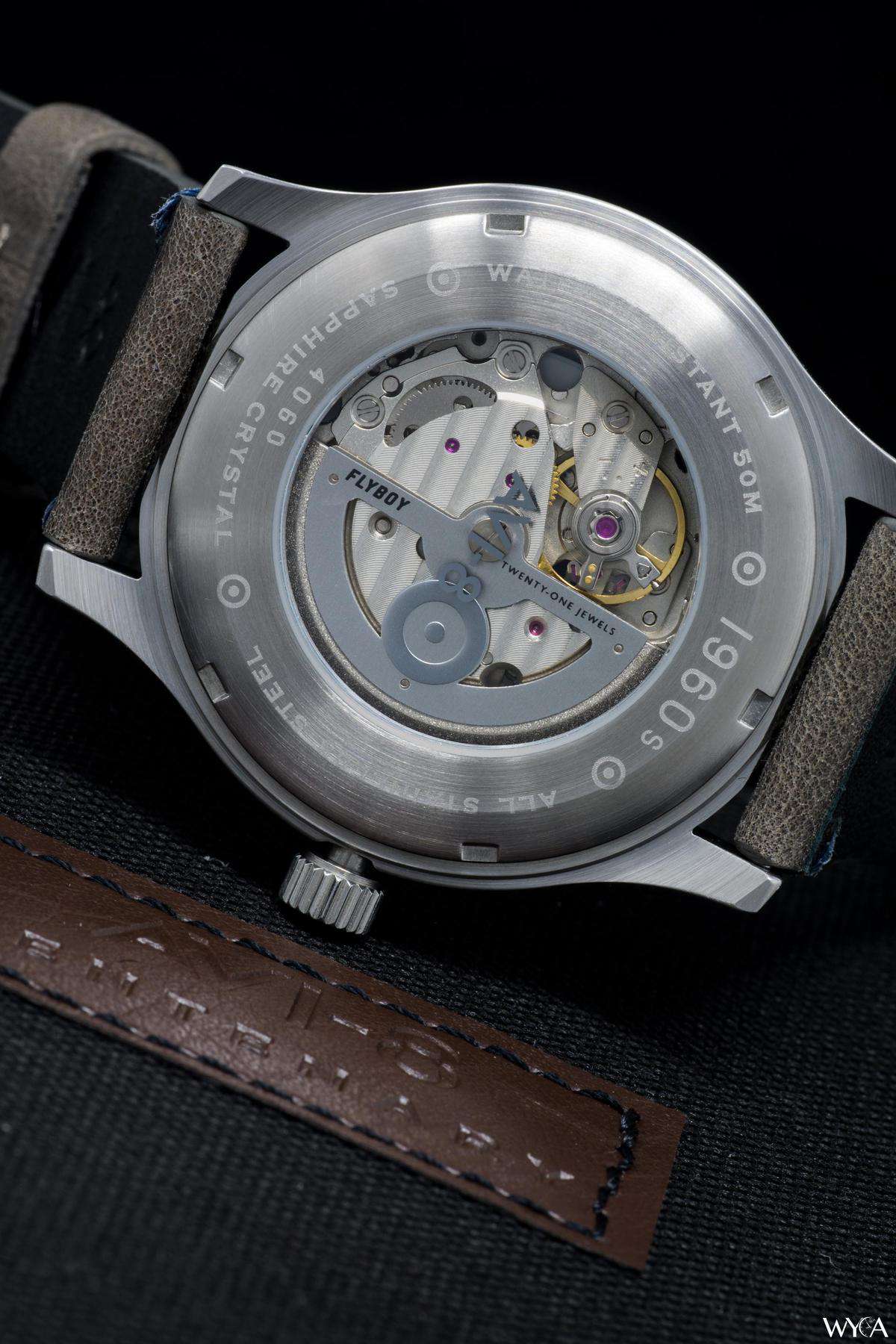 Given the entry-level price of the Centenary (around $375 or so), it’s not surprising to see that Avi-8’s chosen to use a robust, albeit barebones, movement.

The Miyota 8218 is a 21-jewel non-hacking automatic movement that beats at 21,600 bph and has a 42-hour power reserve. Accuracy is spec’d at -12/+40 seconds per day. None of the specs are particularly good (nor are they bad), and compared to other automatics found in similarly priced microbrand watches, the choice to use the 8218 is very “middle of the road”.

However, the 8218 does have a couple of complications that allowed Avi-8 to have some fun with the dial, and so it’s hard to bemoan its use in favor of other more technically-capable movements. For the price, it’s a suitable movement that keeps the Centenary from being all show and no go. 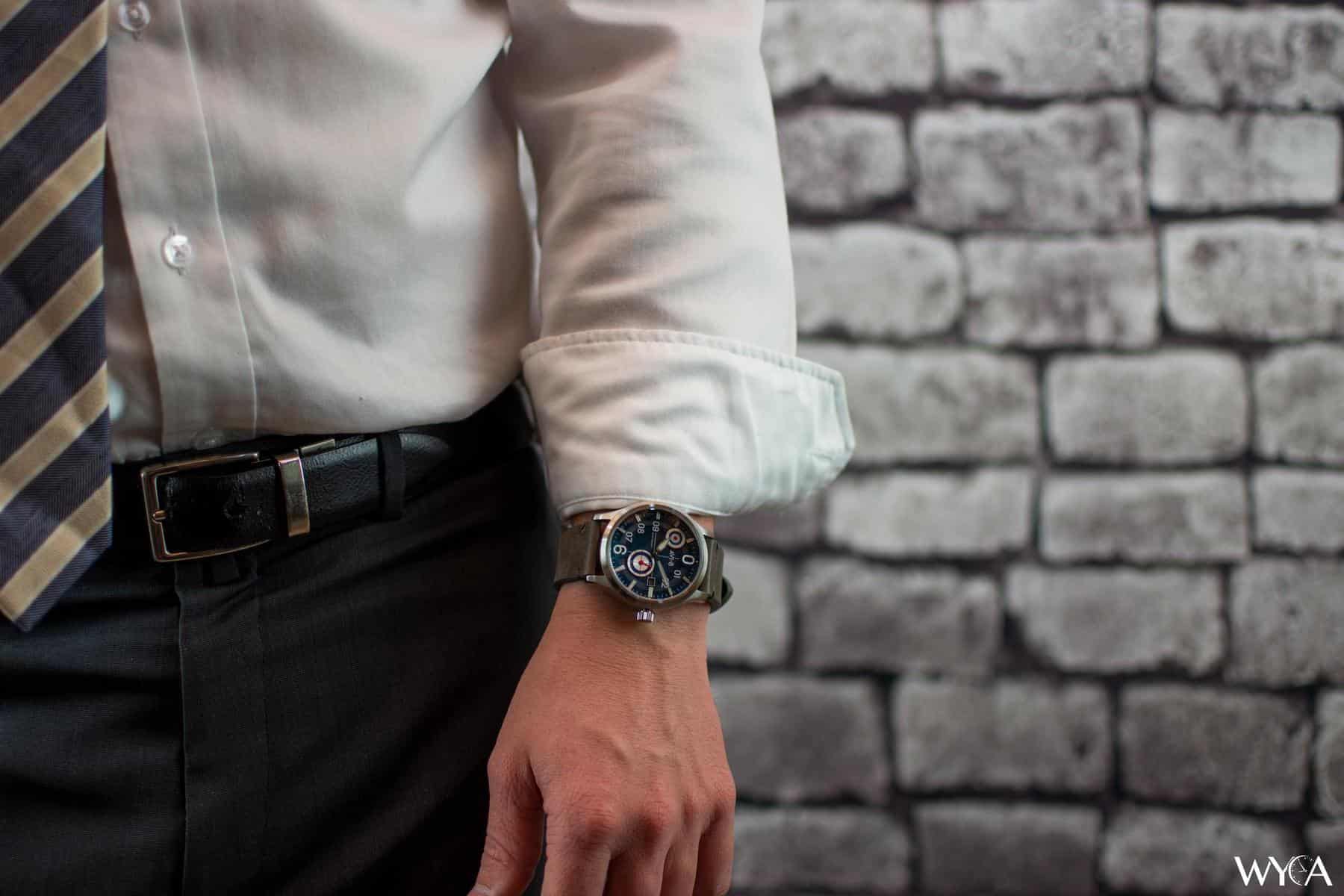 A High-Flying Addition to Your Wrist

The Flyboy Centenary 1960s is a real winner. It’s priced right, powered by an automatic movement, and protected with sapphire. The MSRP of around $375 does put it up against some entry-level Swiss automatics (such as the Hamilton Khaki Field), but in my opinion, the 1960s can play in the same playground.

Watch snobs will take issue with the low-spec movement, which I would be more understanding of if the MSRP of this watch was $425+. However, given the price, the 8218 is appropriate (and also a reliable choice, which is nice). The movement isn’t anything special, but it’s also not what is supposed to shine on this watch.

Avi-8 covered their bases when they designed this watch, and it shows in all the details big and small (the date display having a dark background, for example, is a small but appreciated touch). I enjoy the almost-but-not-quite-skeleton dial, 1960s feel, and solid construction.

All told, I think you’ll be happy with this watch on your wrist.