Summary:  The Traser Black Storm Pro is a “Limited Edition” wristwatch from the company noted for its use of “H3” tritium self-illuminating light tubes. This wristwatch is heavy on the military/stealth look and it is rated to 200 meters water resistance. But it seems expensive for what it is; a basic quartz watch with so-so illumination.

Traser H3 watches are relatively popular with collectors and the general public. Although the company probably isn’t as well known as watch manufacturers like Seiko or Timex, Traser is certainly more than a boutique brand. 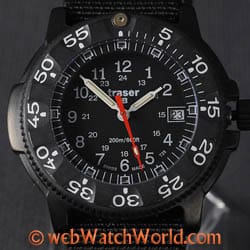 Traser watches are probably best known for their use of tritium tubes, which are used for illumination rather than the more typical luminous paint, such as Luminova (by Nemoto & Co. Ltd.) and SuperLuminova (by RC Tritec Ltd.) or other types.

Traser is the brand name of the watches but the company is owned by the Swiss firm “mb-microtec ag”.

I’m using parenthesis here because apparently the company uses lower case letters for the company name; for “traser H3”; and for “trigalight”, the name they have given to the tritium gas tubes used for illumination.

The trigalight tubes used in Traser watches are filled with tritium gas. mb-microtec ag says they can make tubes as small as 0.5 mm in diameter with a length as short as 1.3 mm.

The company says that green is the most visible color, but the tubes also come in white, yellow, purple, orange, blue and red.

The tritium gas glows when it interacts with the coloring or coating on the inside of the tubes, creating the glowing effect. Traser claims the illumination will last for 20 years with a half life of 12.3 years; however, the company warrants the lume for only 10 years. I’m not sure if the watches can be returned to the factor to replace the tritium tubes or what happens when the tritium fades past its useful life.

Traser isn’t the only watch brand using tritium tubes; other well-known manufacturers include Ball, Luminoz and even Vostok now uses tritium for illumination in their Ekranoplan “Caspian Sea Monster” line of watches.

I have owned two Traser watches; the Black Storm Pro shown here and a Traser Super Sport, introduced in 2003. I’ll have to be honest and say that I have been disappointed with both watches, not due to performance, but in the value received and in the usefulness of the tritium illumination. 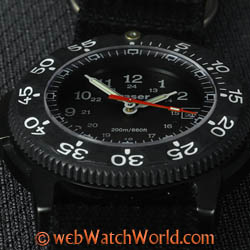 The prices for these watches seem very high for what you get, in my opinion. They use a relatively basic quartz movement and I have found that the illumination provided by the tritium tubes has come nowhere near the claims as I understand them. Indeed, the “hype” surrounding the use of tritium, as described on the Traser website, can lead to disappointment by owners in my opinion.

The reality of the tritium illumination is disappointing for several reasons, which I’ll explain in this review. In fact, I sold the Super Sport soon after I bought it and I have only worn the Black Storm Pro perhaps 3 times in the two or so years I’ve owned it.

Other than what I think is a high cost vs. value equation, there’s nothing intrinsically wrong with the watches; they’re just not for me. I know there are many Traser fans, so this is a matter of personal taste, and I’m simply giving you my subjective opinion in this article. 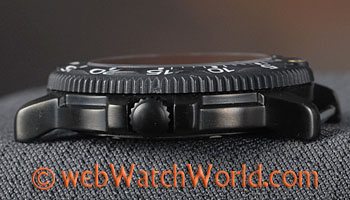 The Traser Black Storm Pro was sold to me as a “Limited Edition” but it’s now said to be a “Special Edition”. I’m not certain when the Black Storm Pro version was first released by Traser, but a Black Storm version (not “Pro”) was announced in 2005 and it looks very similar. I also don’t know what the differences are between the “Pro” and regular versions.

The watch came on a rubber dive strap but I currently have it on a 22 mm black NATO strap, which I think suits this watch perhaps better than any other watch I have on a NATO.

The watch has a screw-in crown but the crown is a bit small, making it slightly difficult to grasp. In fact, I think the whole watch could be “pumped up” by about 10-15% in its dimensions all around and not suffer at all. 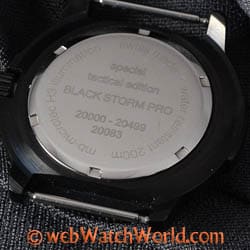 One feature of the Black Storm Pro, besides the use of the tritium tubes, is its water resistance rating, which is 200 meters (660 feet). That’s a good showing for such a relatively thin watch.

The bezel is said to be made from carbon fiber. Why it would be, I’m not sure. It feels like hard plastic. It has strong detents and it’s unidirectional with 60 clicks, but it’s slightly difficult to grasp, due to the external shape of both the bezel and the watch case. The bezel rests very, very slightly off when the zero hour button indicator is placed in the home position at 12 o’clock. 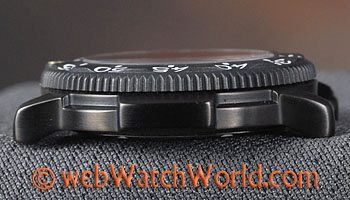 The Black Storm Pro watch case is exactly 11.00 mm thick (Traser lists it at 10.0 mm) and 43.03 mm wide, measured with a Vernier dial caliper. It has a small “bump” on the case on the opposite side of the crown guards, which balances the look and adds about 2 mm more width at that point. The watch, including the black NATO strap shown in the photos, weighs 86 grams.

This makes it a very comfortable watch to wear, especially on the NATO strap, although it’s also comfortable on a nice, soft silicone strap. The watch face has a bit of a strange “bezel-to-face” proportions, with the actual face being only 23 mm wide inside the chapter ring. The chapter ring is 2 mm wide on either side, so the crystal (made from sapphire) is 27 mm across.

The Black Storm Pro uses a Ronda 715 movement, , which is a fairly pedestrian quartz movement used in many watches. It is claimed to have a long battery life and pulling the crown out to stop the watch is said to save battery life.

Ronda claims a -10 to +20 seconds per month accuracy, which seems like a wide range for a quartz watch. This one was set to “atomic” time on the afternoon of July 30, 2010 — a date I remember because it was Buddy Guy’s birthday and he was playing at a concert I attended at the Birchmere in Alexandria, Virginia.

I put the watch back in the watch box that night and took it out again to take the photos for this review, on February 25, 2011. That is nearly 7 months and the watch was running exactly 31 seconds fast — not bad — an average of about 4 seconds per month or 1 second per week.

One issue I have with this watch is that the seconds hand hits almost none of the seconds markings, throughout its entire sweep of 60 seconds. In comparison, a $75.00 quartz watch I own hits almost every one without fail.

The stainless steel case of the Black Storm Pro is PVD coated and so far, this one has proven to be rugged, although I haven’t worn it much and I’m pretty easy on my watches. The watch back is a screw-on, appropriate for a watch with this depth rating. It’s polished though, which I find strange on such a “ruggedized” watch. I think the case back would look better in brushed metal.

The engraving on the case back appears to be etched, giving it a somewhat cheap appearance, as does the Traser use of lower case letters, which always look unfinished to me. The watch is made in Switzerland, according to Traser.

I find the illumination of the tritium to be the most disappointing aspect of this watch, and that’s a lot, considering that Traser makes such a big deal over their use of the gas and since the parent company manufacturers the tubes. I have noted that they don’t have illustrations with comparison photos of the excellent SuperLuminova or Seiko-type lume compared to the tritium, probably for good reason. Even my Glycine Combat with SuperLuminova far outshines the Black Storm Pro, as does a $150.00 Seiko “Monster”.

In fact, my experience with tritium tubes has been that even when new, the watch must be in a very dark environment to notice the light provided by the tritium lume. It does not glow anywhere near as bright as a good lume paint, with the most noticeable difference being that lume will fade after a few hours, while the tritium will remain constant, albeit at what seems to be a greatly reduced level of illumination.

Perhaps if they used a combination of SuperLuminova with the tritium tubes, then we’d have something. But I suspect Traser’s pride would not allow that to happen.

So overall, I have to say that I’ve been very disappointed by the performance of tritium illumination and there’s probably way too much “hype” surrounding its use. I know one thing: you can absolutely not rely on the photos provided by the manufacturers. Most of the photos seem fake to me, with the tritium tubes glowing like they’ve been lit by a bolt of lightning, rather than the dim visage they provide in reality.

For example, the photo below was taken in a studio, during the day, with the watch surrounded by a cardboard box to provide darkness. The sun was coming through a window on the right. The camera was set at f4.5 at a high ISO 1000 and the exposure had to be set for 5 full seconds just to register any glow from the watch. This photo has been un-retouched except for cropping and a slight sharpening for display on the web.

Note that unless a photo includes data on how the watch was photographed, any lume can be made to seem fantastic. I could have left the shutter open for 10 seconds or used Photoshop to enhance the brightness and colors of the tritium tubes, so if this isn’t known, than you can basically discount any photograph of lume that you see. 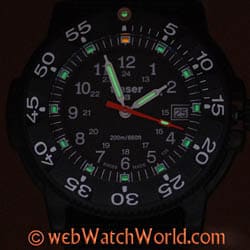 The Black Storm Pro has good legibility, my comments about the tritium notwithstanding. The relatively small face doesn’t affect readability that much and the white-on-black contrast helps. The small internal numbers for 24-hour time reading are difficult to read, however.

The Black Storm Pro is still listed in the Traser catalog. I’ve seen it at retailers for a list price of $360.00, which seems perhaps about twice what I think the watch should sell for.

I’m sure Traser would say that the sapphire crystal, the use of tritium and the 200 meter depth rating makes the difference, but my feeling is that there just isn’t enough here to make this watch a real value. If you happen to come across a used example at a good price and you want to give tritium a try for yourself, you may enjoy the watch, as long as your expectations are realistic.

The Black Storm Pro is a disappointing watch for me. It performs perfectly well and “it is what it is”, but it’s just not for me. I know there are many Traser fans out there, but after owning two of them, my tritium curiosity has been fulfilled.