Skip to content
Home » The Venerable Casio F-91W: The Digital Watch That Took Over the World 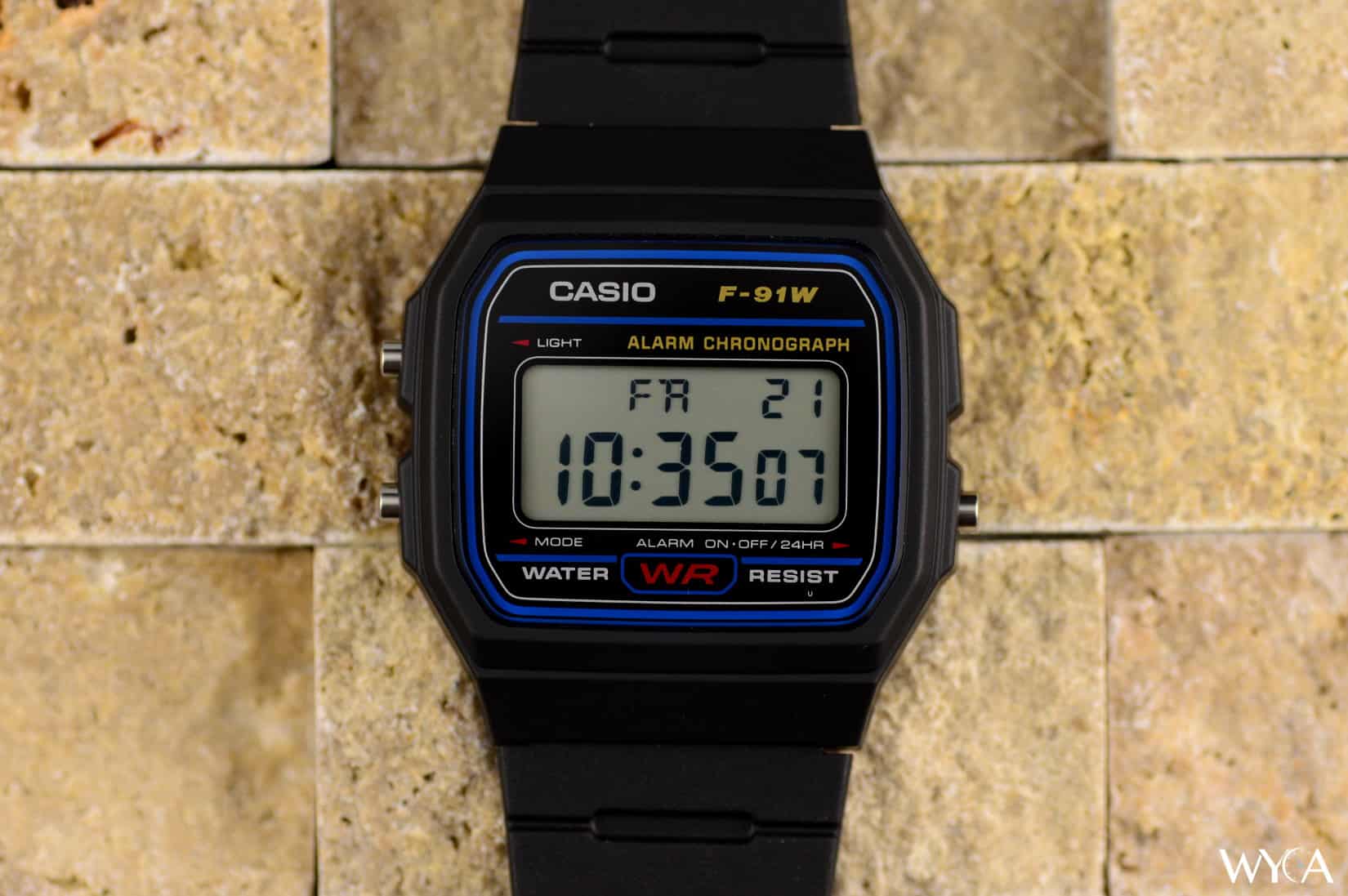 Everyone & Their Dad Has One of These Old-School Casio Digital Watches, and the F-91W Is By Far the Most Popular Version Available

I have a confession to make: one of my favorite watches costs less than a night out at the movies. Yes, I’m talking about the Casio F-91W digital watch (obviously), but that’s not quite the joke you might think it is.

The thing is: these Casio digital watches are genuinely good watches. No, they’re not stylish (or even modern), and they certainly won’t provide any klout among your friends (unless they’re into affordable watches), but that mean these Casio’s aren’t good. Great, even.

The Casio F-91W is the real deal: one of the rare inexpensive watches with a history and it’s own Wikipedia page. Let’s learn more about what makes these little digital watches from Casio tick, shall we?

With a built in 1/100 second stop watch (with split lap times), audible hourly notifications (on/off selectable), 50m/165ft of water resistance, single alarm, and annual calendar, Casio packed a lot of functionality into a 33mm wide case. Also included is the world’s worst backlight, which will light up the left 40% of the screen when pressed.

When it comes to watch brands, Casio isn’t one of the first that’s likely to come to mind. That’s because most people tend to make a distinction between a wrist watch, such as that gorgeous Seiko or Citizen that they’ve been eyeing up, and the inexpensive digital watch their parents gave to them for their seventh birthday. 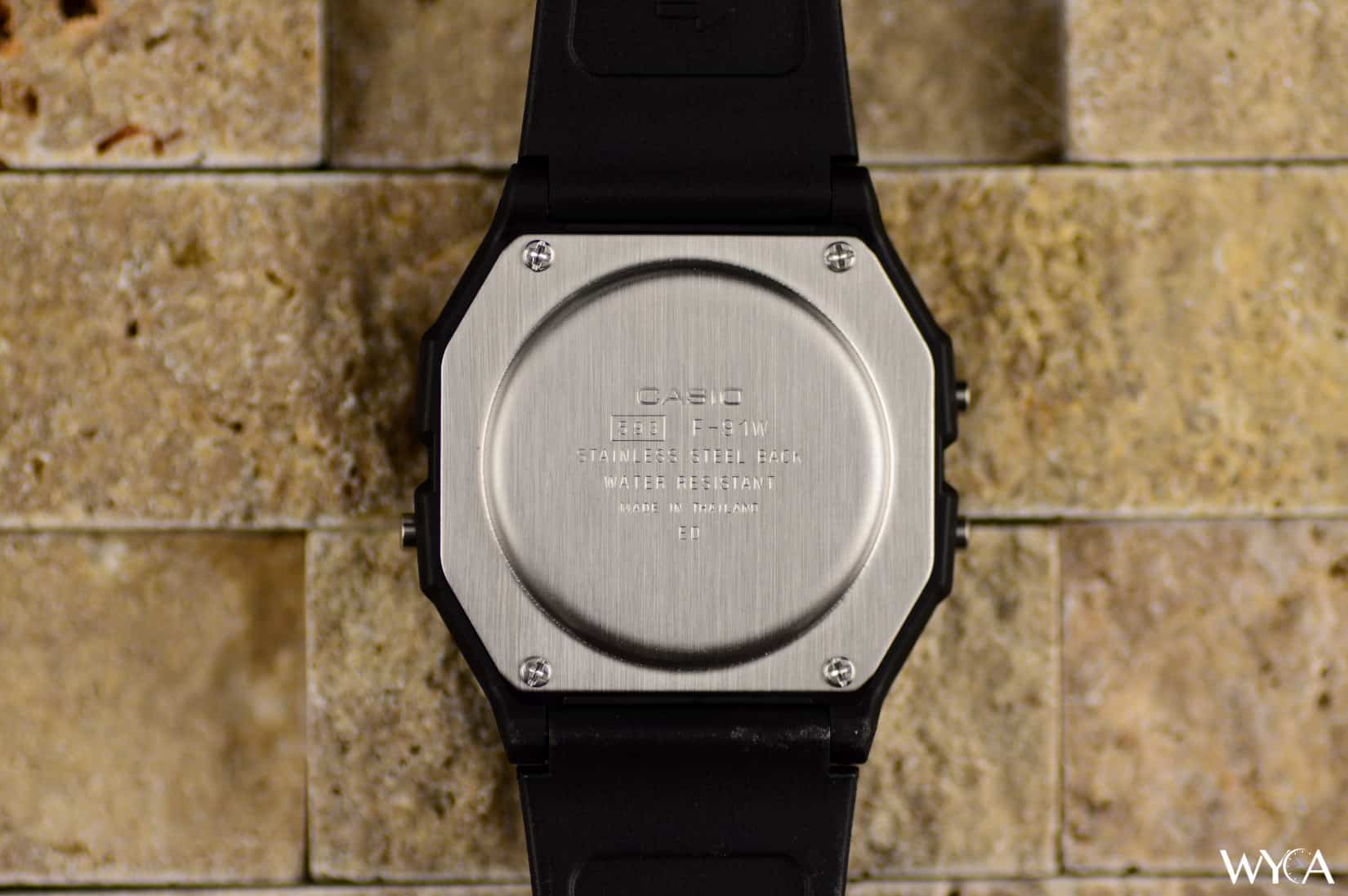 Casio does indeed make watches, though, and lots of them. In fact, Casio has been a leader in the consumer electronics industry for decades, and watches are but one of many facets of their larger business. Also, the G-Shock… you’ve heard of that, right?

With a battery life known to edge on 10 years, and accuracy good to within 6 minutes per year, the F-91W was a game changer when it was released in 1991. The price for this “modest masterpiece” back then? $20, and it’s easily found for under $10 today.

So, is it really all that surprising to learn that Casio still sells millions of them every year? Given its affordability and versatility, I don’t think so. 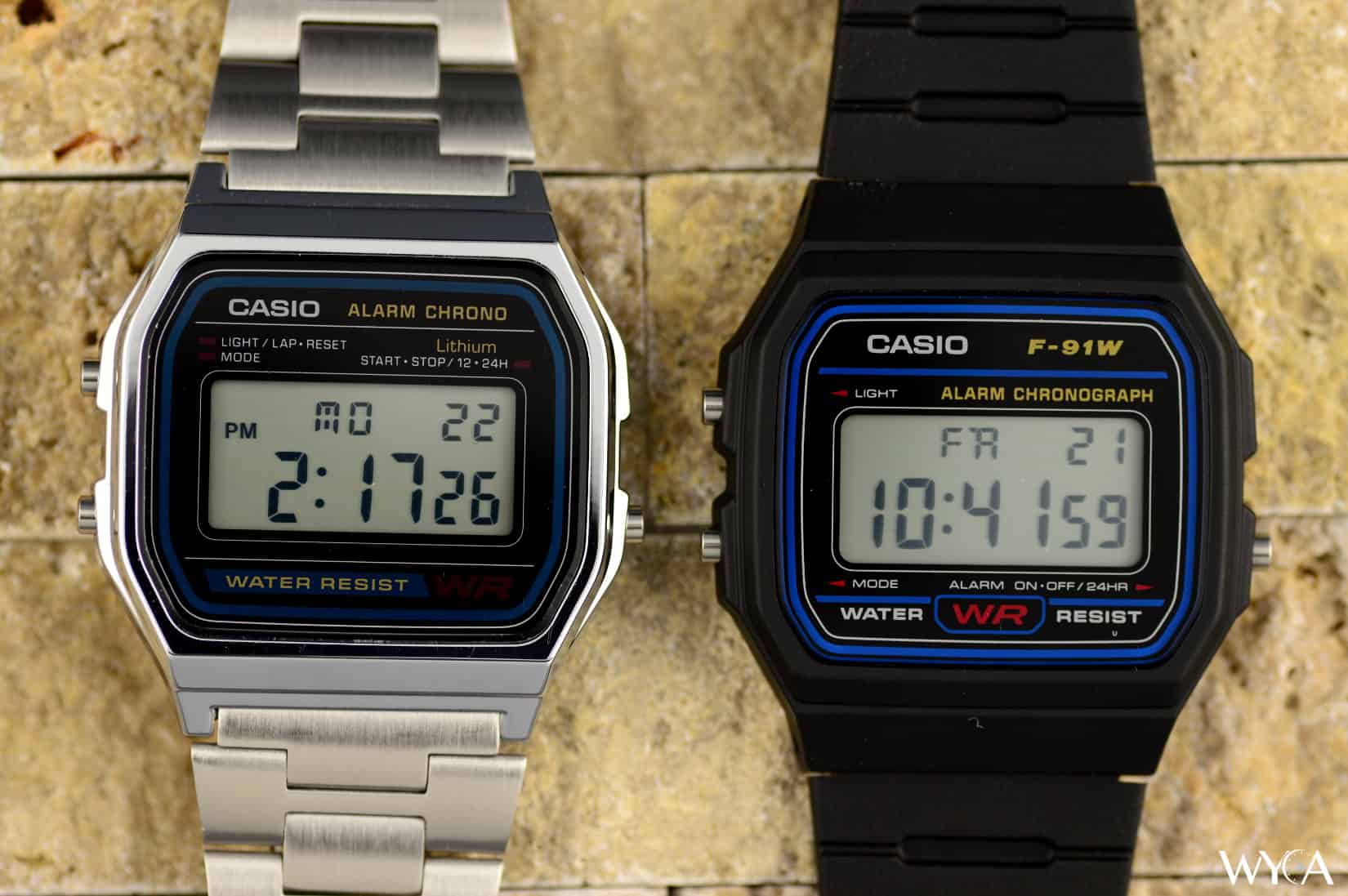 I’ll Say it Loud & Clear: You Can Not & Will Not Find a Better Watch for the Price. Period.

The thing about the F-91W is that it is, unquestionably, the best watch you can buy for its street price of $10. It doesn’t get any better than this.

Novelty-factor aside, and there’s a huge novelty factor here, the P-91W has all the hallmarks of a great watch: it’s accurate, inexpensive, loaded with value, and has complications that most people will find useful at one point or another. If you take the 3 minutes needed to learn the watch and understand its functions, its value becomes obvious.

The F-91W was so successful that an entire ecosystem of watches was built around the design, including the much classier A158W-1 shown in the photo gallery below. The best part of this process? The price throughout the entire ecosystem never got to be much more than $25 at its peak, and most are now found for under $15 today. 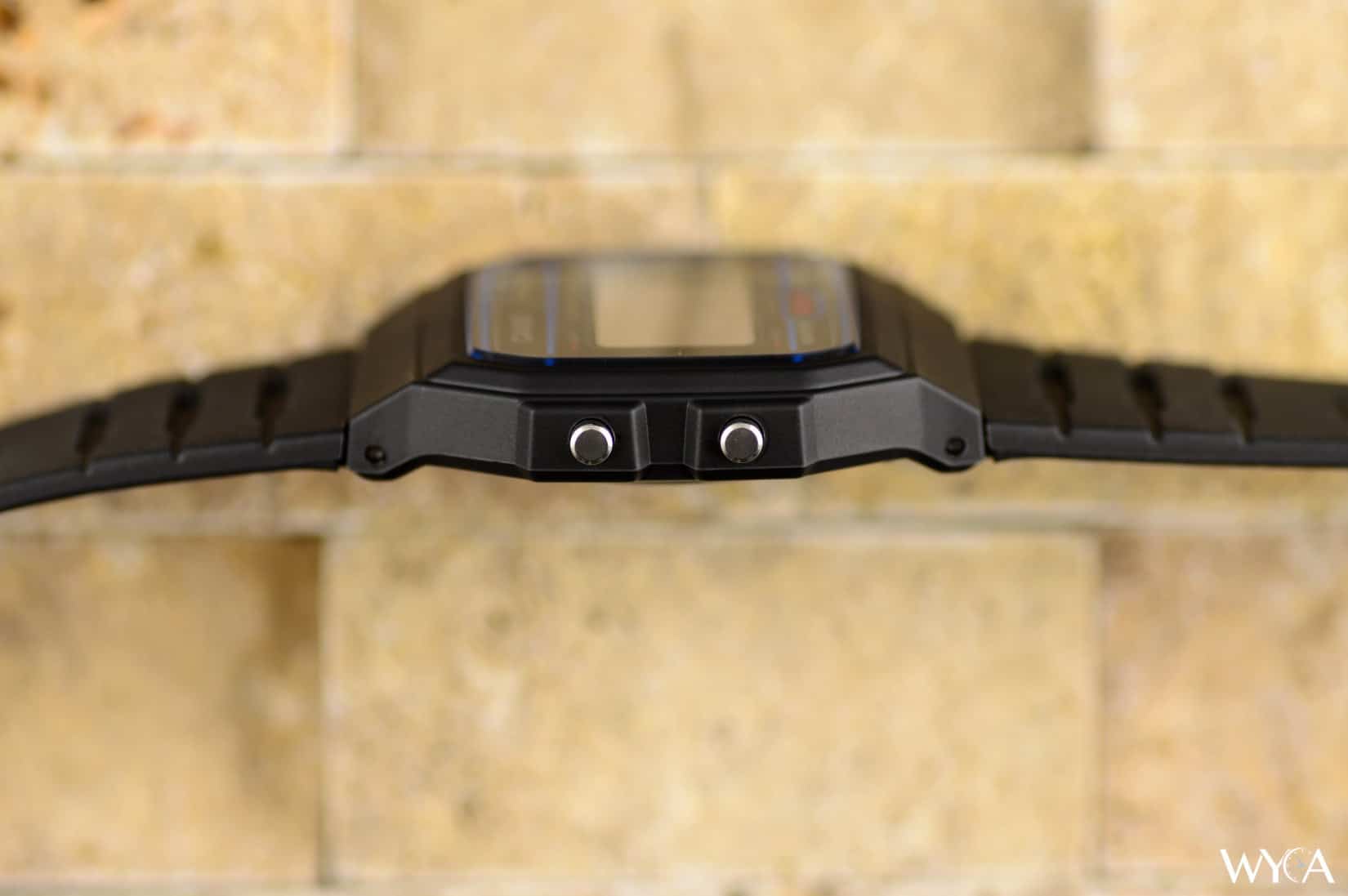 In a weird way, the hordes of cheap, inexpensive digital watches that permeate the market today is, in part, the legacy left behind by the F-91W. Despite this, the little “Casio that could” is still one of the best available in its class 25 years after its introduction- a testament to not only the brilliance and simplicity of its design, but also to the strategy behind its execution. 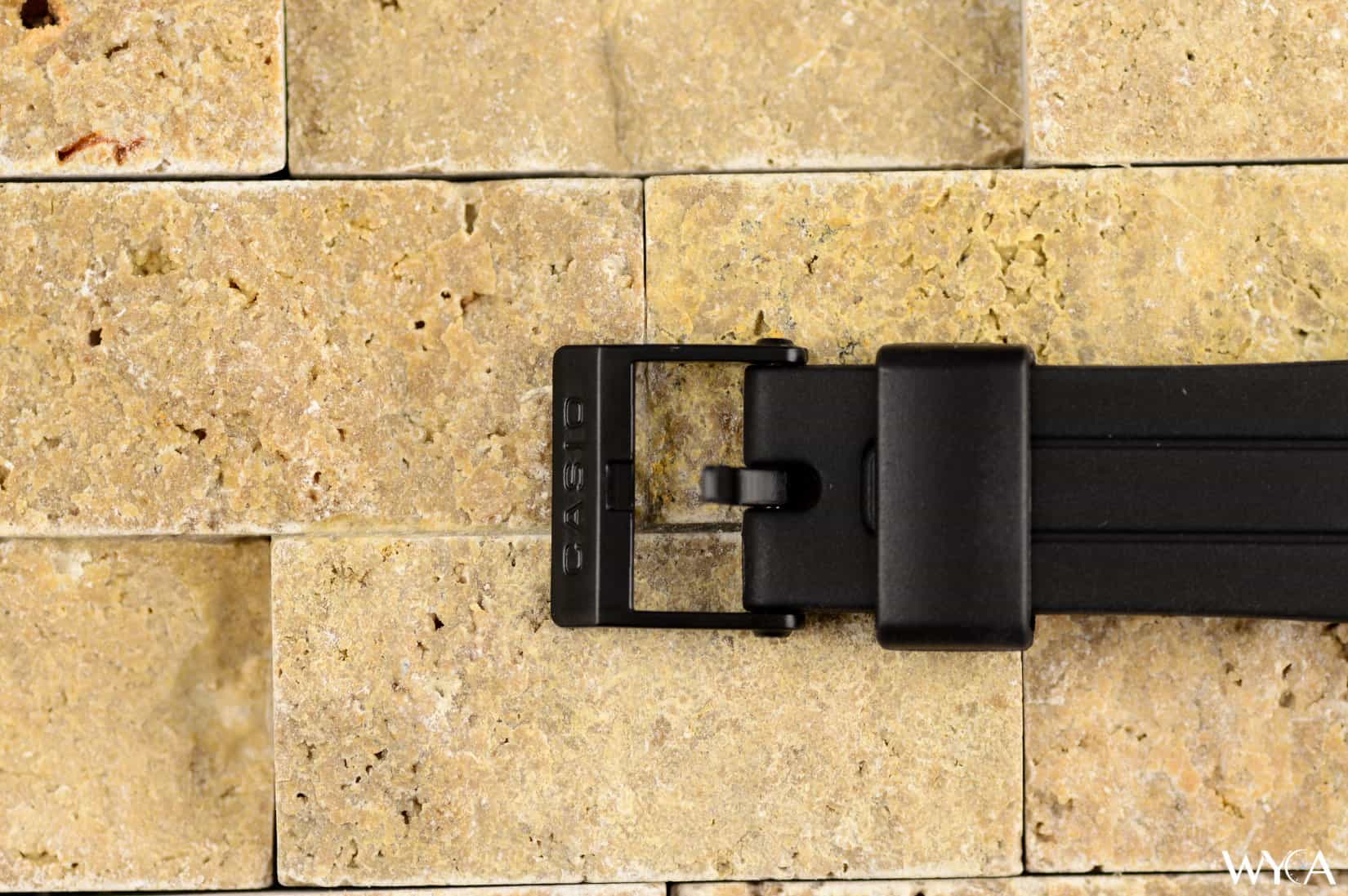 The F-91W, and the family of watches that it spawned, never wanted to be anything other than what it is. It makes it easy to appreciate, because rather than try (and fail) to be something it isn’t, Casio decided to really nail the niche the F-91W fills. This results in something that was inexpensive but not cheap; these watches have a claimed 7 year battery life, but as most people don’t actually operate the F-91W in the way its battery life was assessed (alarm used every day/backlight used for 1 second per day/etc.), the battery life tends to edge closer to 10 years than it does to 7.

This focus on value, as opposed to price, is what makes this watch, and many of the others in its family, a stand-out entry into its class. It quickly became known as the world’s most versatile watch- a sentiment still echo’d by many to this day.

Its Immense Popularity Made the F-91W a Pop-Culture Hit

Hamilton watches has made their connection with Hollywood a big part of their brand, as seen by prominent promotional materials on their website, as well as some major big-budget movies (such as Men in Black 3 & Interstellar) that practically feature their watches. I have no opinion one way or the other regarding the effectiveness or value of this approach, but I can tell you that Casio enjoys similar placement without the fanfare.

Seen frequently in movies (such as Napoleon Dynamite), and even pictured being worn by President Obama, the F-91W became so common that it was (and still is) a de-facto choice for many costume designers.

For people growing up and living in the late 80’s and early 90’s, seeing a F-91W on someone’s wrist was commonplace. Everyone had one, and so did you.

Many Have Called it the Quintessential “90’s Watch”

Do a Google Images search for “90’s watches” and count how many times the F-91W appears on the page. I’ll save you some time: at least 7. That may not seem like a lot given the number of results that appear, but then consider how many watches that appear are Casio’s. Here’s another hint: at least 70% of them, and quite a few of those are calculator watches, too.

The proliferation of digital wristwatches took place at rapid speed, and Casio lead that charge by releasing watch after watch, iteration after iteration. Throughout all of this, the F-91W remained top dog. Its staying power and general popularity proved to be far more commanding than I think even Casio imagined it would be.

Even today, it continues to top the sales charts on Amazon.com, Amazon.ca, and Amazon.co.uk. 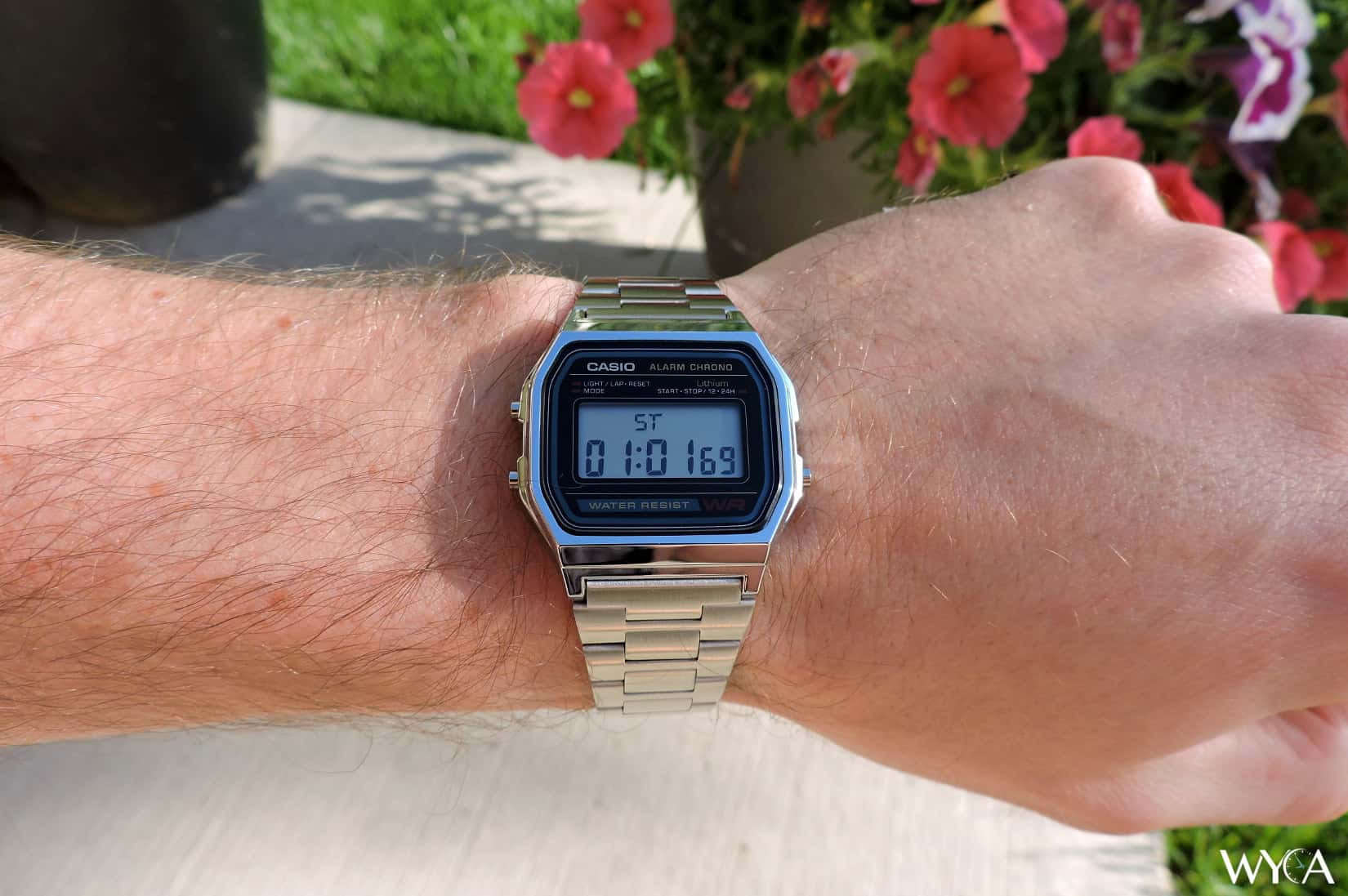 With no excuse needed, I decided to pick up a brand new F-91W as well as an A158W (which is essentially the same watch but with a steel looking case and steel bracelet). I’ll admit that I was more excited for the arrival of these two Casio’s than I was for the Seiko Recraft SNKN01 (which I was due to receive at the same time). This is not meant as a knock against the Recraft: the Recraft is a fine watch (and, frankly, superior in basically every way), but it doesn’t carry the incredible nostalgia factor that these Casio digital watches do- it also costs 12-15 times the price.

On my wrist, which has shrunk quite a bit as I’ve cut down from 225lbs to 190lbs, the Casio actually feels right at home. Yes, it’s on the small size, but its rectangular shape makes it feel a bit bigger on your wrist than its diminutive case size would suggest. It sits square in the center of the wrist, and its shape allows it to make good use of the available real estate. 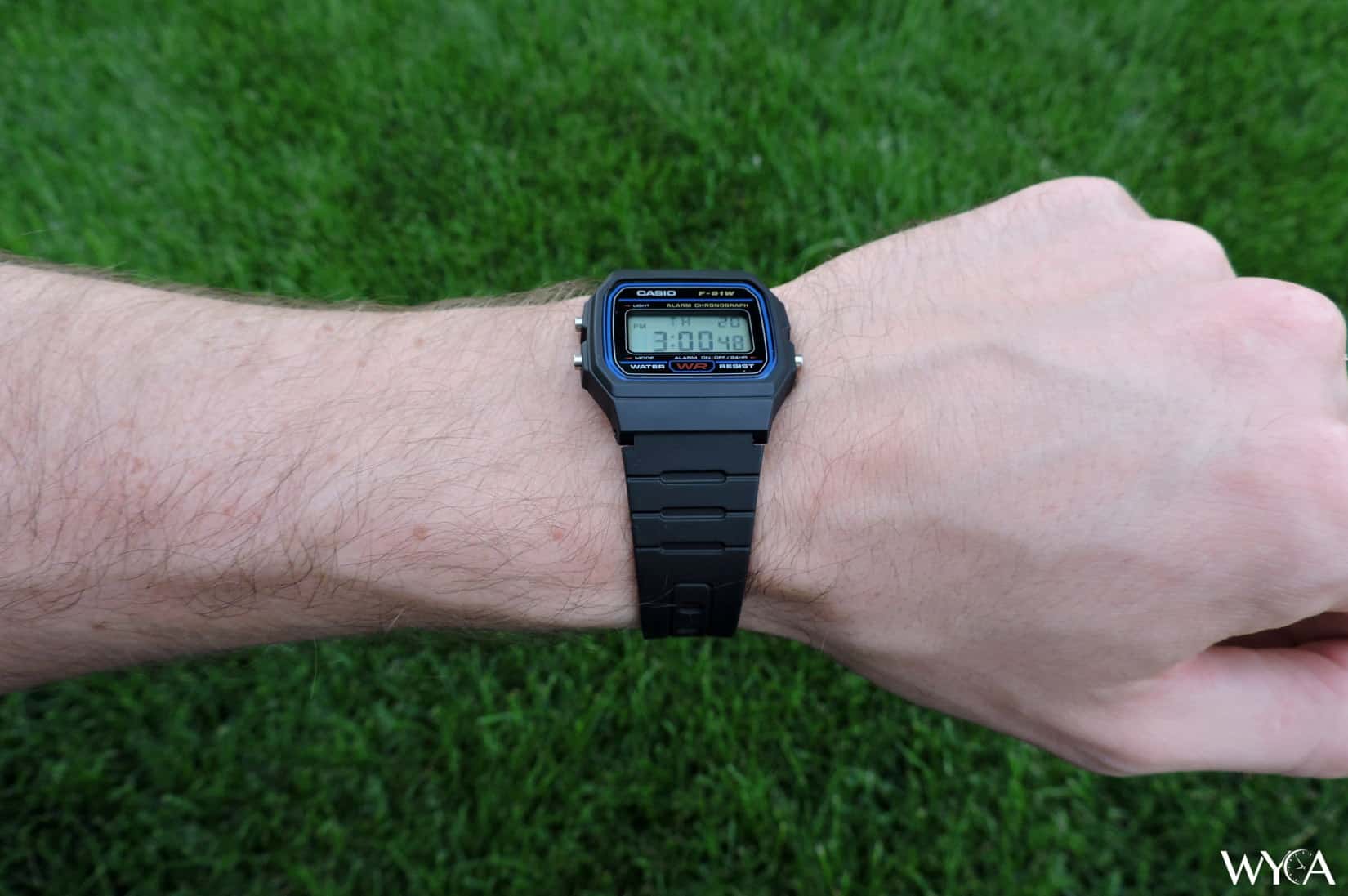 The LED screen is always easy to read so long as there’s light. In the dark it’s a pain to see, despite its backlight, though it’s not impossible. The backlight will allow you to tell the time… barely.

When I was a kid I remember my F-91W’s alarm going off every night at 9:15 pm (eight year old me’s bedtime)- an alarm that would serve to haunt my mother every time it went off for nearly a decade. It’s incredible how quickly a lost watch can get found when it makes 20 seconds of racket once per day every day. This took place because nobody in the house could be bothered to figure out how to disable the alarm. Well, adult me figured it out sans manual in about 2 minutes. In fact, I figured the entire watch out about a minute after that. A 3 minute learning curve isn’t bad for a watch that can do many of the things that makes a smartphone appear smart. 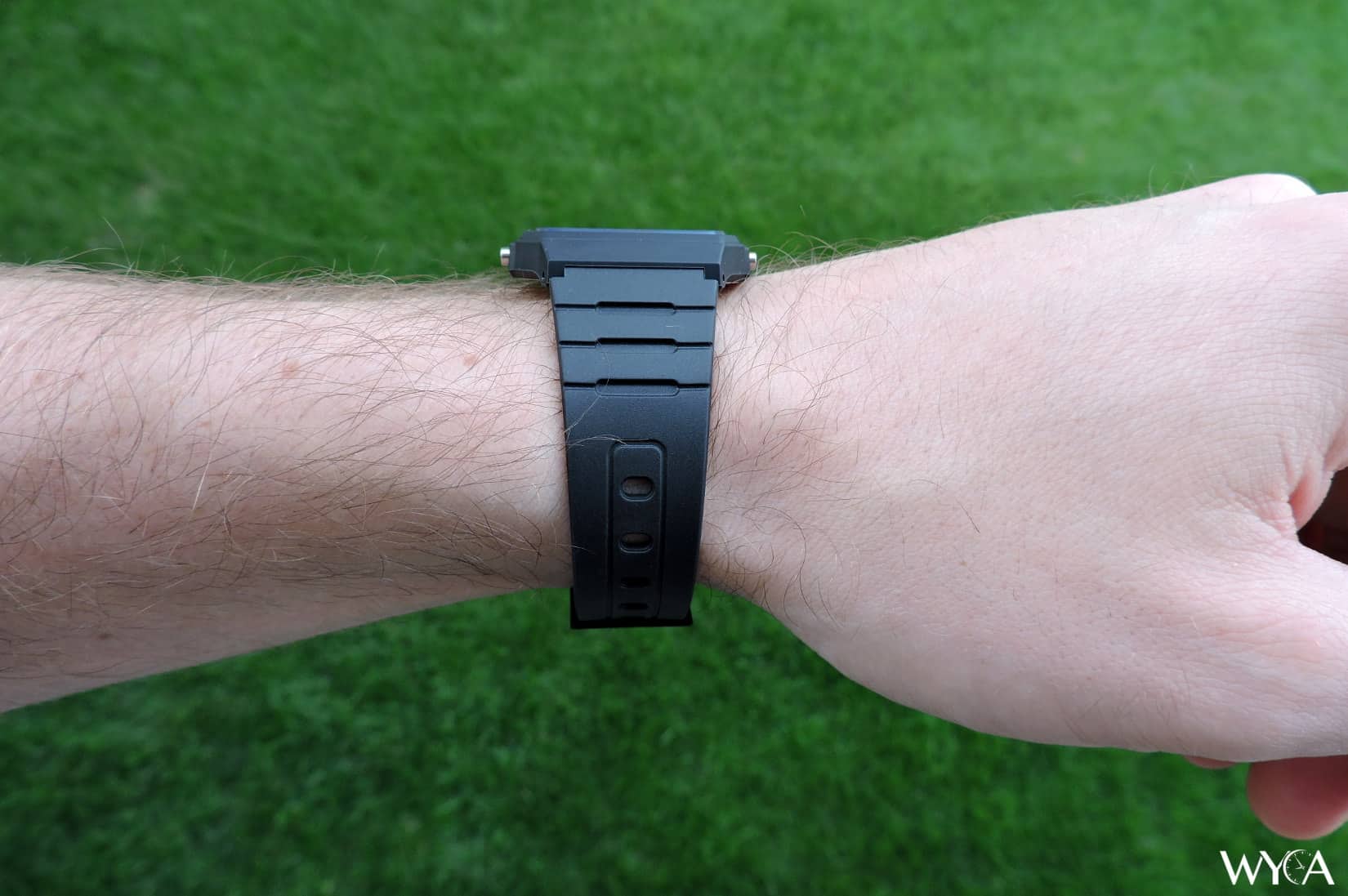 I will admit this: I wear the A158W about three times as much as the F-91W. Even though they’re effectively the same watch, the steel case and bracelet of the A158W give it the stylistic edge (it also matches my wedding ring perfectly).

What I’ve come to love about this little Casio is how unpretentious, unapologetic, and unromanticized it is. My colleagues didn’t mention it – not even once – and they know that I’ve got something new on my wrist every week. Most watches get inquiries, but this one gets the silent nod instead. Respect.

For $25 or less the F-91W and its siblings simply can’t be beat. Nothing touches them. They set the standard for the class, and in many ways, Casio has demonstrated how to make buckets of money year over year by doing something simple really, really well.

15 thoughts on “The Venerable Casio F-91W: The Digital Watch That Took Over the World”