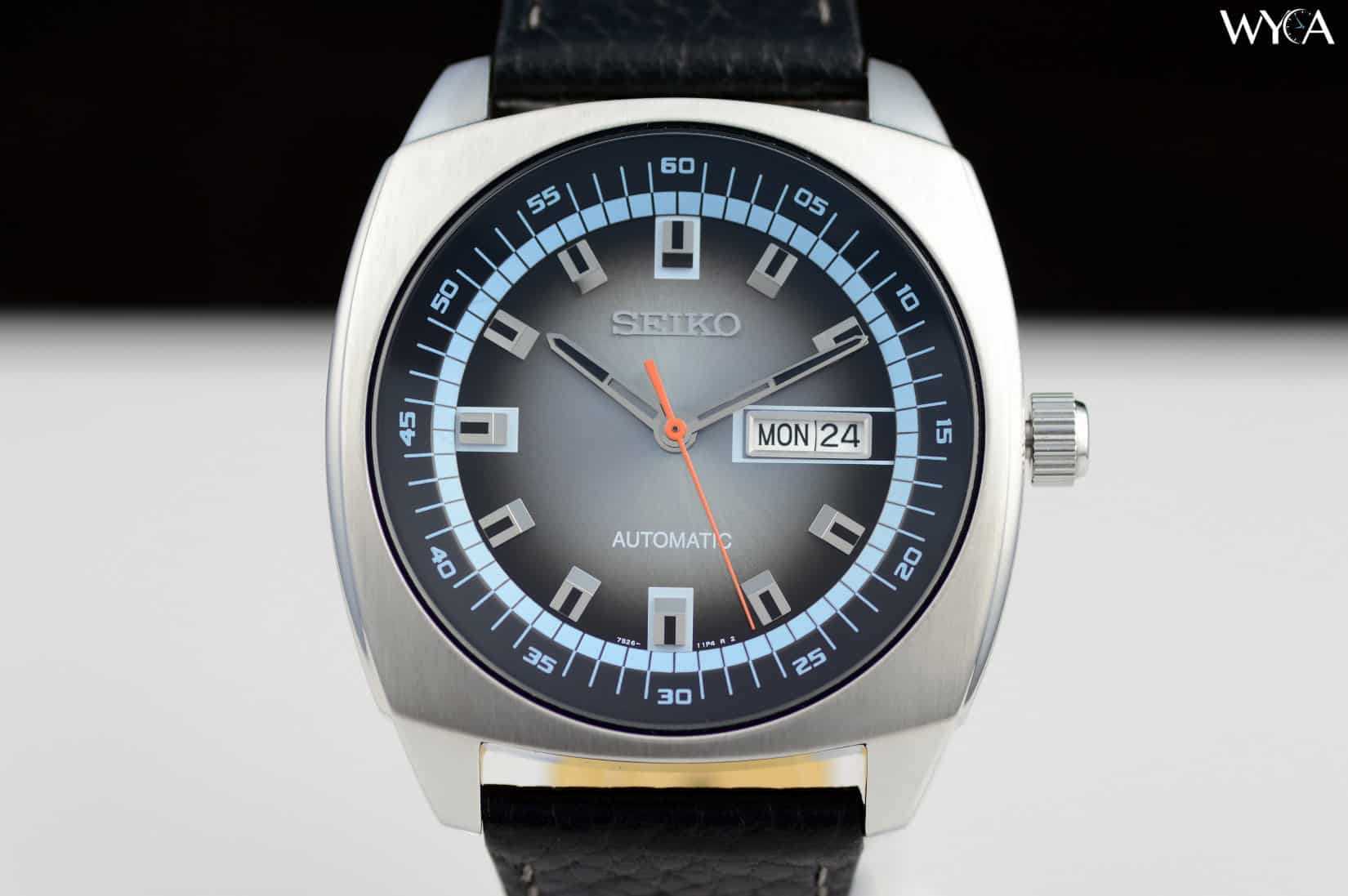 The Seiko Recraft SNKN01 is a Great Inexpensive Automatic Watch

It’s one of those watches that feels satisfying to own and wear. Generally found for under $175, the SNKN01 is an attractive and sporty timepiece that has the same 7S26 automatic movement found inside the ubiquitous SNK809.

The Recraft line of watches feature large 43.5mm cases and a vintage-inspired look. The case reminds me a little bit of the vintage Hamilton Pan Europ; fans of vintage watches from the 1970’s will find the design familiar and attractive.

Seiko as a brand is one of my favorites and the Recraft series of watches appear to be a great addition to the world of affordable automatics. Let’s check it out. 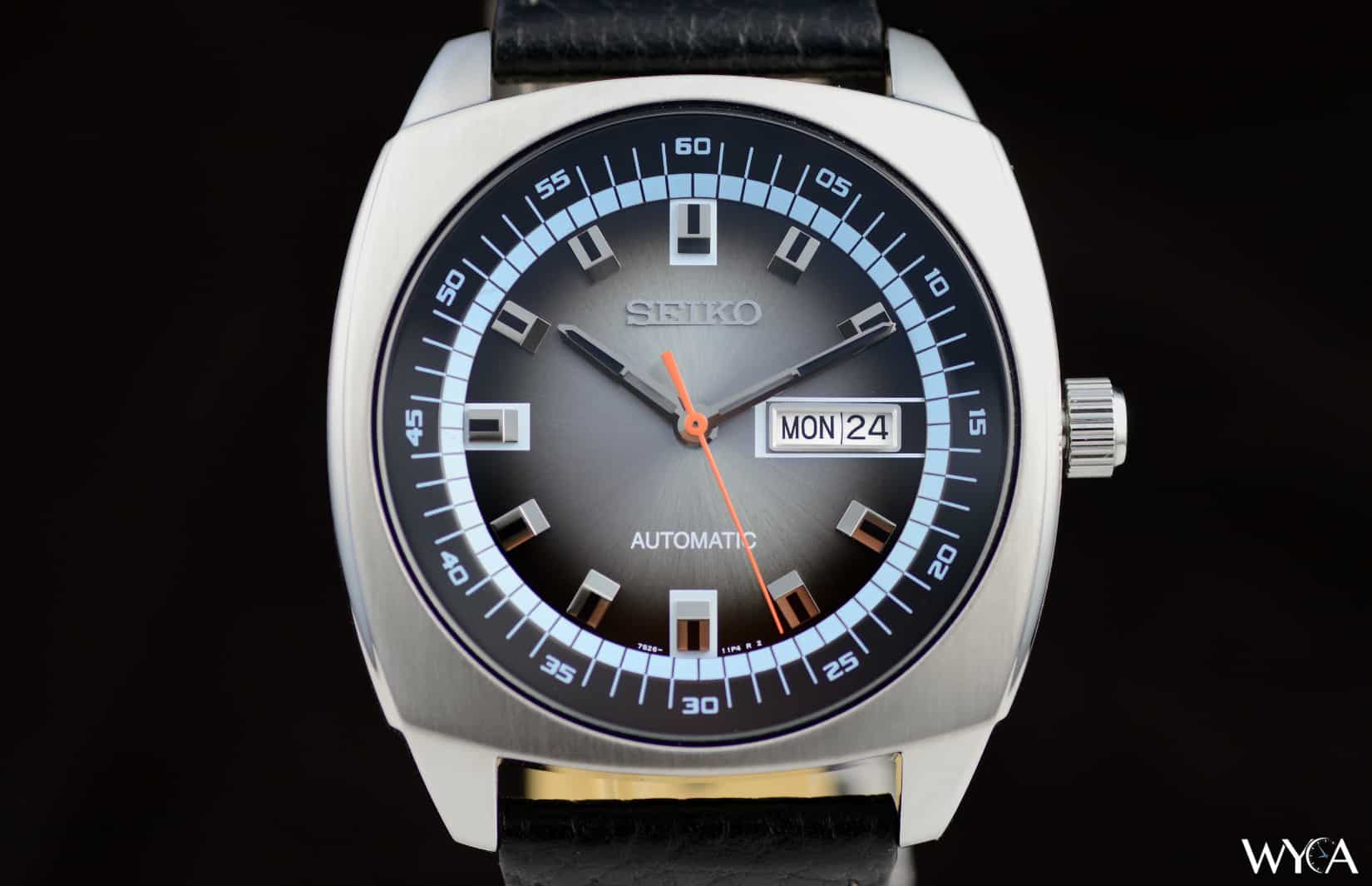 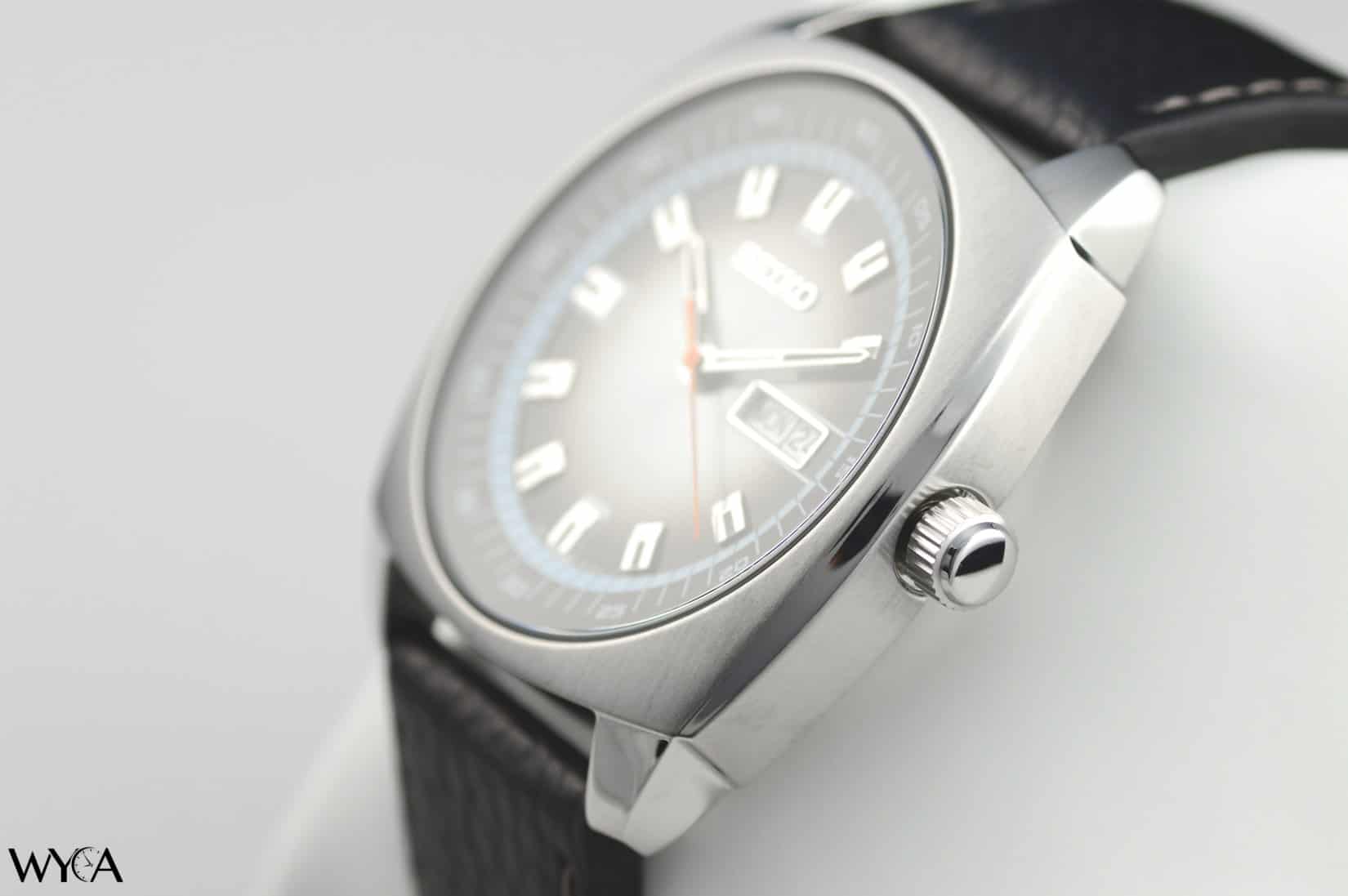 Matt Diehl from A Blog to Watch did a great piece on the Recraft series that shows off some of the different models. I recommend checking it out, especially since he talks a lot about the roots of the design language. It’s a good read.

Looking at this watch in particular, I don’t find much visually to dislike. The blue outer ring is like a homing beacon, constantly drawing my eye. I’ve noticed that I check the time a lot when wearing the SNKN01. I’m a fan of how Seiko styled the dial; the contrast between steel and grey against the blue markers and the orange seconds hand looks great.

The hour and minute hands have a good angle to them that reflects light and makes them appear larger than they are. The dial has an almost mat finish to it, but in the right light it can really shine; light strikes the face in metallic waves, wrapping around the dial and lighting up the face. It looks brilliant, but it also somewhat obscures the actual act of timekeeping. In direct light you’re going to have to make a considered effort to tell the time. 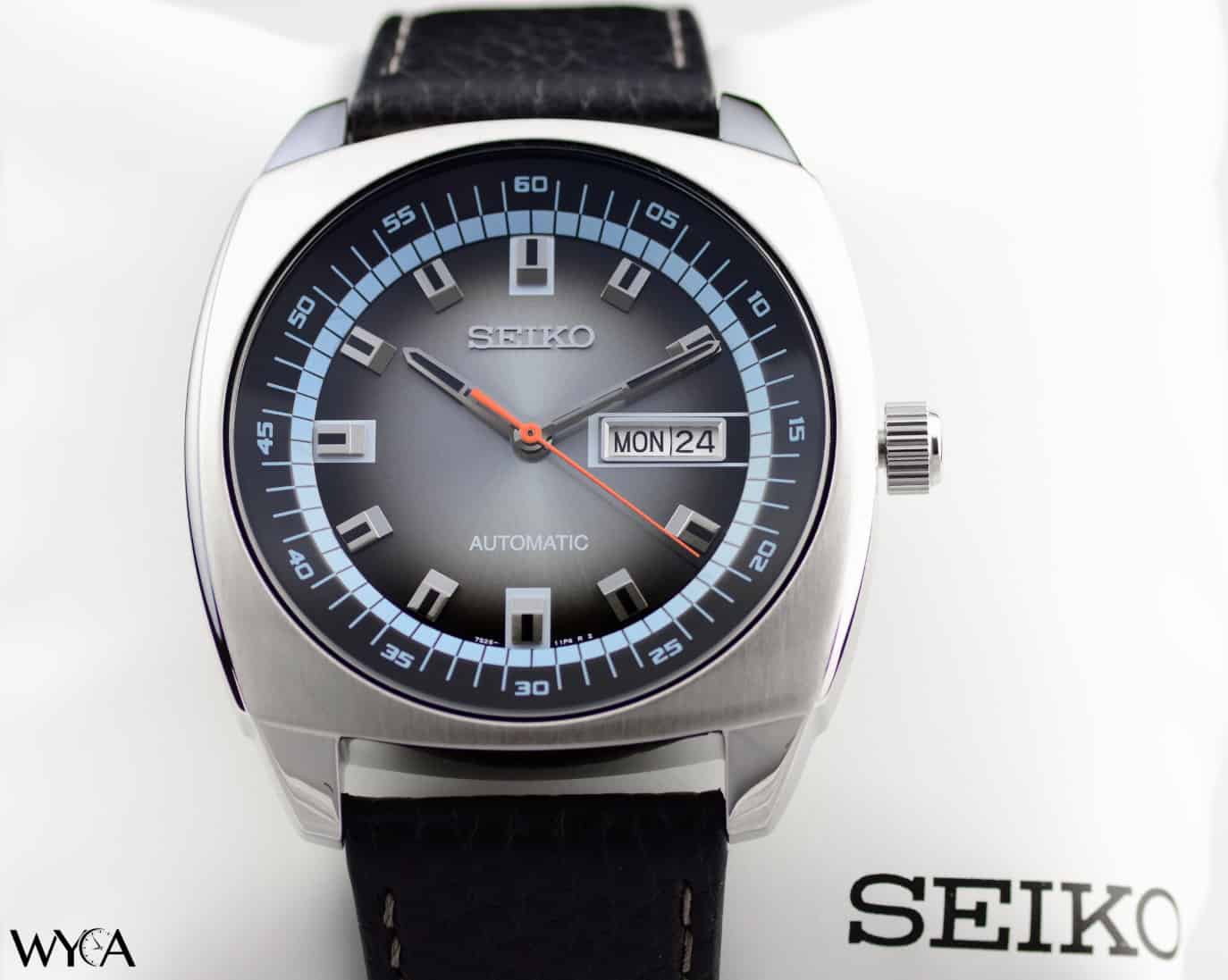 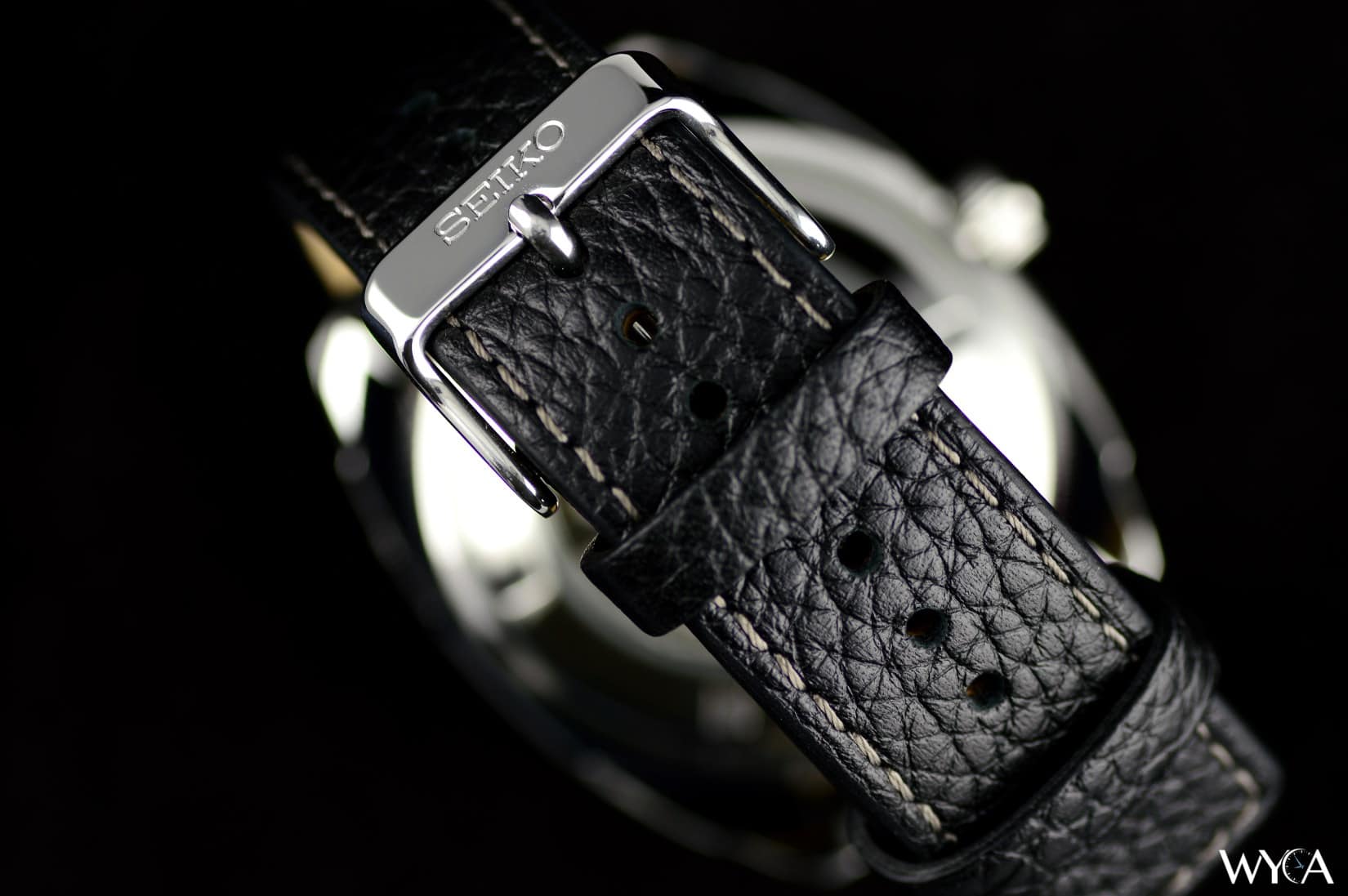 This problem with timekeeping seems isolated to the SNKN01; other color combinations are fine. The SNKMN97 is actually my favorite color combination, and it’s much more legible in direct light. Still, I think the SNKN01 is a great looking watch. I like the dial, even if it swallows the hands in certain light.

The case is mostly a brushed finish – a great compliment to the grey dial – with touches of polish on the top of the lugs and the sides of the case. The crown is also polished, lacking any engraving, and blends in to the look just fine.

Turn the watch over and you’re presented with the clean, but undecorated, 7S26C movement. Like other inexpensive Seiko automatics, the movement is sparse. However, the viewing window is unobstructed, affording you an excellent view of what is known to be a rugged and reliable movement.

Where I feel the SNKN01 is let down somewhat is the strap, which looks a little old despite being essentially brand new. This is an easy change, and also reflective of its frugal pricing. It’s easy enough to pull the strap off and switch it up, so I wouldn’t place too much concern here.

All said, I think the SNKN01 is a great looking watch. The entire Recraft collection is attractive and affordable- even the versions with steel bracelets are usually under $200. 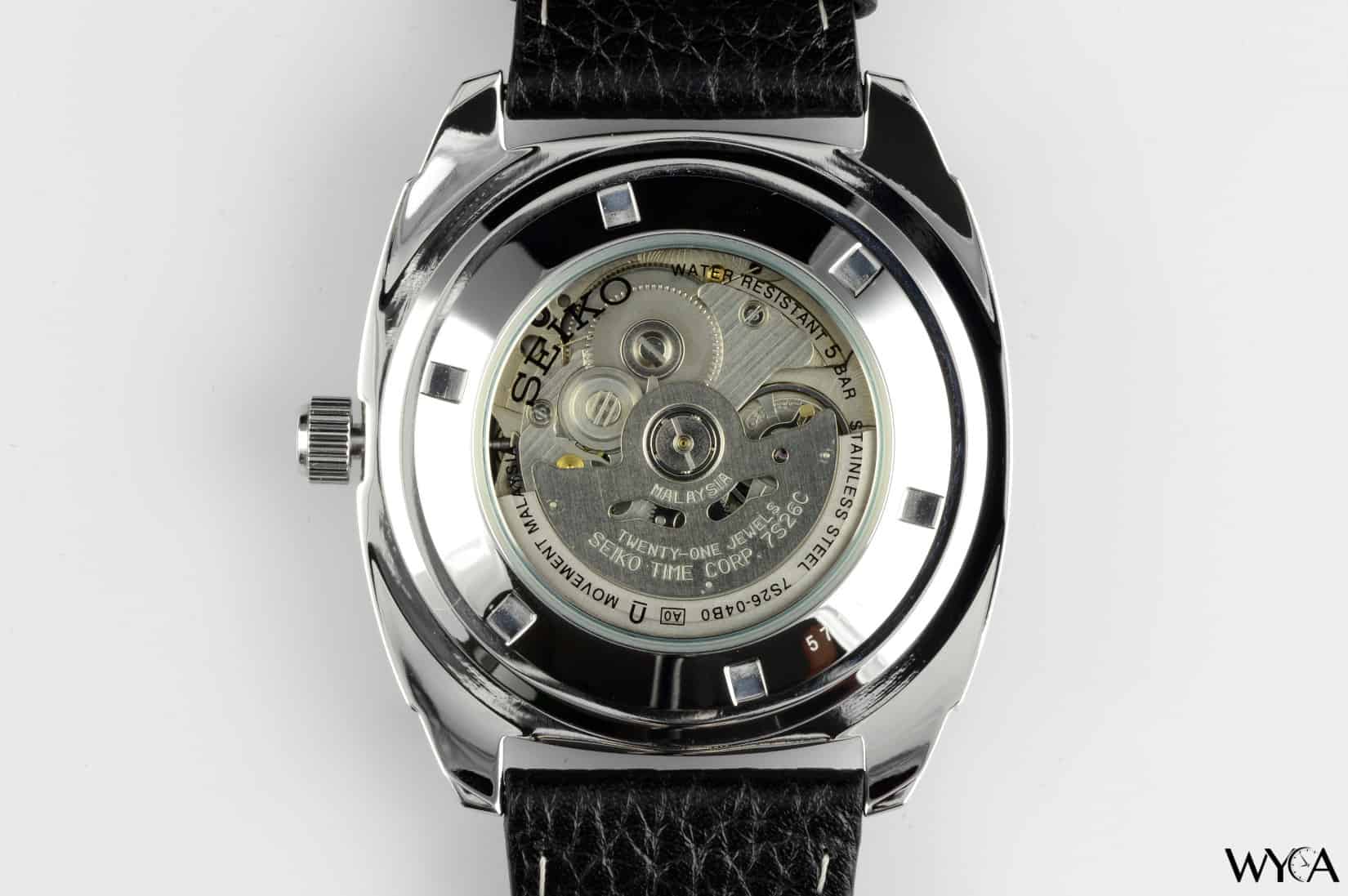 Overall, build quality isn’t bad. However, one part of the colored rim beside the 9 o’clock hour marker has a barely perceptible line through the square. It’s something you have to look for to find, but it’s clearly visible to the naked eye. This is the first Seiko I’ve reviewed that has had such an issue on the dial.

You can see the imperfection on the face once the watch is less than a foot away from your eyes. Up close, it’s fairly obvious when you’re looking for it. I can’t imagine every Recraft sold will have a similar problem. Seiko is generally quite good with their fit and finish. Although, the 6, 9, and 12 o’clock hour markers don’t sit evenly in their colored area. Again, not a big deal, but it drives the perfectionist in me a little crazy.

The flat hardlex crystal is flush with the bezel and shows no scratches or wear. Flat crystals generally wear better than domed ones. The Graf Zeppelin I reviewed last week and the Orient Bambino both have domed crystals, for example, and the Zeppelin has taken a couple of knocks accidentally because of it.

The case, which is mostly brushed save for two polished stripes on each side and the tops of the lugs, looks good and is built well. 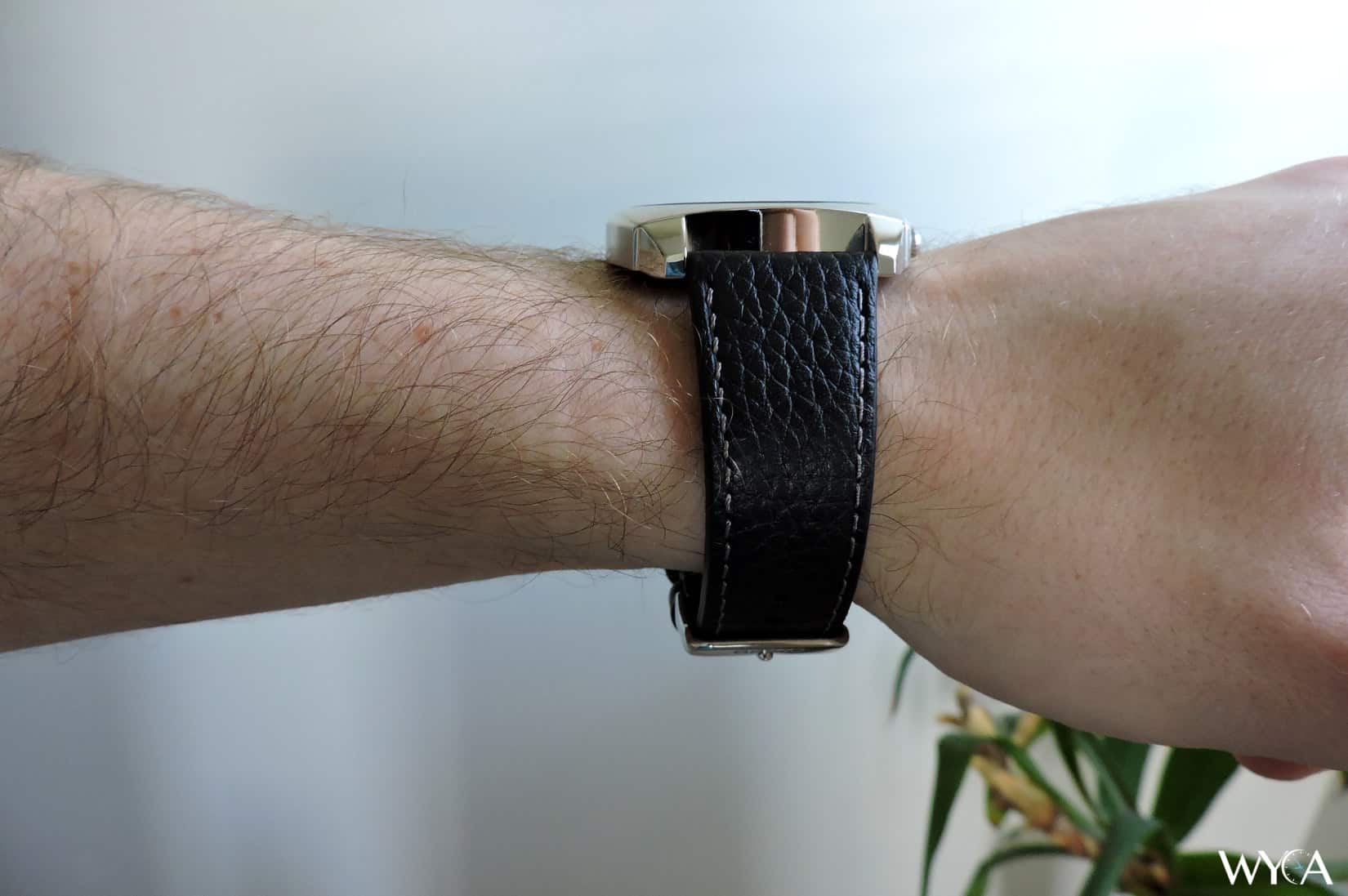 Calf-skin leather with a standard steel buckle feels like a bit of a letdown compared to the dramatic and sporty dial. The truth is that the strap is comfortable enough to wear, but it fails to match the dial in terms of depth or visual appeal.

Still, the strap’s alligator-grain hides wear marks really well. It’s harder to see where the clasp marks dig into the leather because your eye struggles to see through the noise. It’s also stitched well and feels well made despite its drowsy appearance.

About the Seiko 7S26C Automatic Movement

Expect a power reserve somewhere around 42 hours. As mentioned, you can’t hand-wind the 7S26, but it doesn’t take much to get it started. A slight movement will get the second hands going.

Standard deviation is -20/+40 seconds per day, and the 7S26C inside this one was +27 seconds per day. That’s quite a lot, but frankly, rigid accuracy is not something the 7S26 is known for; instead, it’s known for being a reliable and rugged movement. Every “watch person” should have at least one in their collection.

How to Set the Recraft Automatic

Found on Amazon commonly for under $175, the Recraft series has a lot to like. The automatic movement inside may be lacking in accuracy and features, but it’s a reliable unit that will last for many years assuming proper care. So too will the case and dial, which are made well.

The SNKN01 consistently shows above its price, looking and feeling like a watch that costs double or triple what it does. It feels contemporary because of its size, but retro because of its dial, and the combination works really well overall.

I’m a fan of Seiko’s and have added the SNKN01 to my collection. If you’re looking for a watch around this size and want an automatic, the Recraft series offers a few models that you should consider. There’s a color combination for just about any application, and it will absolutely put a smile on your face whenever you wear it.