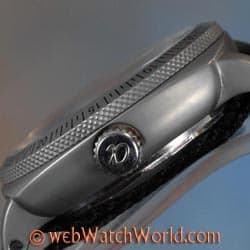 Summary: The Alpha 24-Hour watch costs less than $75.00 and mine is very accurate. But my suggestion to Alpha would be to spend a bit more on upgrading the quality; this one has a few problems that cloud the overall owner experience and reduce enjoyment.

Alpha watches are made in China (Hong Kong) and the company offers an extensive line of “homage” wristwatches, covering the bases from dress to traditional to diver and military-themed.

The company’s wristwatches are very reasonably priced, although the prices have risen over the last couple of years by about 50%.

On the one hand, 75 bucks is about as cheap as you’re going to get for a mechanical watch with an “in-house” movement (although where the Alpha movements are really made is a matter of debate).

But on the other hand, I’d rather pay even 50% more than that if it meant I could get a watch with reasonable — or dependable — quality. This is the main issue I have with the Alpha 24-hour watch, and I’ll discuss that below.

I’ll be the first to admit to basically zero knowledge about the brand. What I do know comes from the various watch collector forums; indeed, this is where I first became aware of Alpha Watch.

There’s a little bit of strange psychology that, I think, takes place when it comes to inexpensive watches. A certain type of collector is always looking for the undiscovered watch or watch brand that offers Omega-like quality and craftsmanship at, well, Alpha prices.

Nothing wrong with that — in fact, to a certain extent, that’s what makes watch collecting, buying and selling a lot of fun. Every collector would like to be the person who discovers something like, say, the next Vostok Amphibia (review) — a true classic that’s also a true bargain. I’m no different, but if I get burned once, I usually don’t come back for more.

Which means that my only experience with Alpha watches is with the 24-hour watch you see here. So I’m not sure if the newer Alpha watches are any better or worse than this one, although it seems from cruising the various watch collector forums that my experience is probably about average. Alpha watches have middling quality and it’s a bit of a gamble as to what you’ll end up with. 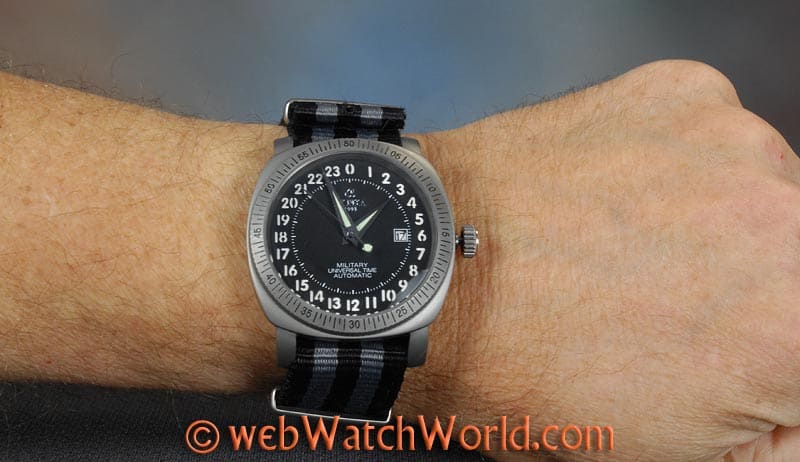 I bought this watch about 2 years ago and sold it recently after wearing it only about 4-5 times. It cost only about $50.00 when I purchased it and, if I remember correctly, that included shipping from Hong Kong to the U.S.A.

The watch arrived relatively quickly and it was nicely packed, so no problems there. It came in a small imitation leather pouch and there was a folded paper instruction sheet in the box. The watch was wrapped in clear plastic and it came with a serviceable rubber strap.

My watch has a nice matte finish that looks like bead-blasted metal; appropriate for a “military” themed watch. It’s not easy to find the Alpha 24-hour watch on the Alpha website; it currently shows up in the “GMT Function/Universal Time” section.

As I’m writing this, Alpha shows only one version of the 24-hour watch, a polished stainless steel version with an “ivory” colored face and green numbers. The matte case with black face version seems to have been discontinued, which is too bad, because I think it definitely looks much better than the current polished version and the black face is more in line with the military look.

But, watches seem to come and go rather quickly on the Alpha website, so perhaps they’ll whip up another batch of matte/black 24-hour watches sometime soon.

There was another version of this watch — or at least a version with a different hand style. My watch was purchased just as they went to the pointed hands, which seem a little out of place to me on a military watch and probably more fitting on a dress watch.

The face has recessed numbers, which is a nice touch, and the lume is as one would expect on a $50.00 (or $75.00) watch; it looks good for a few minutes and quickly fades.

Details of the Alpha 24-Hour Watch 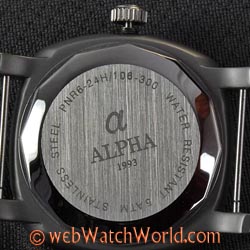 I no longer own the Alpha Military Universal Time 24-hour watch, having sold it recently. So unfortunately I was not able to publish a video but I took some measurements just before it left.

The watch measured 43.4 mm across and it’s 13 mm thick. Now while that doesn’t sound all that large compared to some of the 44 mm and up watches of today, the Alpha 24H watch has a sort of modified cushion-shaped case which makes it wear rather large. It’s definitely a “sporty” watch and it can be a bit difficult to wear under a long-sleeved dress or casual shirt.

The lug width is a non-standard 23 mm, but that’s not a problem, as just about any 24 mm strap (and, of course, 22 mm straps) will fit. The Alpha comes with a serviceable rubber strap but I replaced it first with a 24 mm wide black NATO strap (review) seen in the video in that review and then with a 24 mm gray/black NATO strap — difficult to find in that color combination.

I think the rather large Alpha watch is overwhelming for the thin NATO, so a thicker 4-5 mm or so rubber strap would probably be a more appropriate match. Again, rubber at 24 mm wide has no problem at all fitting in the 23 mm lug width of the Alpha; 0.5 mm on each side is whisker thin and doesn’t make a difference and, in fact, it fills out the width with no gaps.

The Alpha watch has an acrylic crystal with a touch of cloudiness. Acrylic may scratch easily (although I did not have that problem) but it’s relatively easy to polish out any marks.

The face of the watch has recessed numbers, backed by a luminous plate. The numbers are nicely formed with a sort of military stencil font and the lume is actually not bad, although like most cheap watches, it quickly fades. The chromed or polished hands look a bit out of place with the black military-themed face.

This is probably one of the easiest of the 24-hour watches to read and tell time. Many other 24-hour watches don’t have enough room on the face for all of the 24 numbers, so they skip every other number or more, which can make it more difficult to read at a glance. The numbers on the Alpha watch are pushed out all the way to the edge of the diameter of the face and the outer non-moveable bezel has the minute markings. Placing the minute marks on the outside is what gives the Alpha all of that important room on the face for the numbers.

The back of the watch features a screw-down solid cover. I never had the back off the watch, so I don’t have photos of the movement. 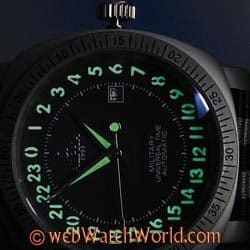 This is where the ownership experience with the Alpha 24-hour watch becomes a disappointment. The watch has a screw-down crown and the crown, by the way, seems small for the size of the watch. It’s out of proportion and it also does not have crown guards, making it seem even smaller.

Unscrew the crown to set the watch; the watch does “hack” but the seconds hand doesn’t always stop right away — sometimes it takes a pull or two to convince the seconds hand to stop. For some reason, Alpha made the watch more complicated than it should be, and decided to make the hour hand separately adjustable. This is where the trouble starts.

It is nearly impossible to get the hour and minute hands to stay in place when the crown is pushed back in. The crude finish of the movement just isn’t smooth enough to allow this to happen, and many Alpha 24-hour watch owners have reported problems in this regard. You really have to play with it to get the date to turn over at 24 hours with the hands aligned at the 24 mark and it’s very difficult to get the hour and minute hands to line up correctly on the hourly marks.

I can see where Alpha probably wanted to make this a true “Universal Time” 24-hour watch, but the crudeness of the movement just doesn’t support this feature correctly. So the Alpha owner ends up having a watch where the hour hand almost never hits the hour mark correctly, and it’s bad news if you have to reset the hour hand for any reason, as it can take many tries to get it all working even somewhat correctly.

Otherwise, the watch kept amazingly accurate time, hardly varying more than a second or two from “atomic” time within 24 hours.

The Alpha 24-hour watch is a good-looking wristwatch but I can only consider it a novelty and not a serious watch. I would much rather have paid even twice or three times as much for the watch if it worked correctly and had a higher quality movement (and perhaps a sapphire crystal). I think Alpha is selling itself short; they have the expertise obviously, but there’s only so much you can do selling $50.00 to $75.00 wristwatches.

This is one case where I’d suggest they move upmarket and spend more time and effort on finishing their watches, charge a bit more and they could be a serious contender for the “Seiko of the 21st Century”. As it stands now, my rather poor experience with the quality of the Alpha 24-hour Military Universal Time wristwatch has convinced me not to purchase any more Alpha watches. Sometimes, cheaper isn’t necessarily better.