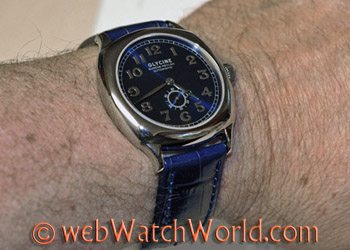 Summary:  Beautiful combination of retro and modern with a nod to the venerated founder of Glycine Watch. 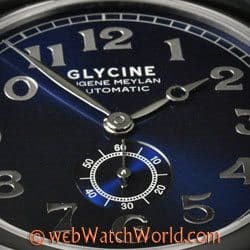 Eugène Meylan founded Glycine Watch SA, located in Bienne, Switzerland, in 1914. The Glycine Eugène Meylan wristwatch is a tribute to Meylan who, according to the company, was an “uncompromising watch engineer who strove for perfection and nothing less”.

One of those works of perfection was the development of a very small and accurate movement, used in women’s watches, according to the company’s history. Meylan’s engineering genius was combined with a knack for marketing, which enabled Glycine to develop a reputation for making and selling high-end watches to wealthy customers.

The company was also one of the first to develop an “automatic”, or self-winding movement and the Glycine Eugène Meylan wristwatch is a replica of that very first design. The company says that “The Eugène Meylan Automatic features all of the refinements and delightful details of the historically significant 1930’s masterpiece that inspired it.”  I have not seen the original that served as the inspiration, but this 21st Century Eugène Meylan certainly has the look of a vintage timepiece, albeit with modern technology, case size and conveniences. 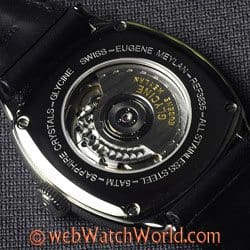 The remaining biography of Eugène Meylan is unfortunately lost in history, but the company went on to survive World War II and also the quartz revolution, two rather large blows. Glycine known today for interesting wristwatches with a strong styling connection to the past.

These also include technological achievements, such as the billet case of the Glycine Vacuum, the Glycine Airman that set the standard for 24-hour watches of the modern era and many other interesting Glycine watches of today. Glycine was also in the forefront of the move to big watches (over 40 mm in diameter) during the last decade, with examples including limited editions of the KMU 48; the Glycine Lagunare 3000 reviewed on WYCA and the (original) F-104 with its barely-wearable 52 mm diameter.

Glycine is one of the few watch manufacturers who has mastered the art of style with a sense of history and modern technology. The company makes a very wide variety of watches, yet each timepiece can be immediately identified as a Glycine.

The only disappointment is that all of those Glycine in-house movements are long gone. As far as I can tell, all of their current watches beat with the ubiquitous ETA movements, so the brand is not quite the innovator it once was. Perhaps if the rumored end of sales by ETA to non-Swatch companies comes true, we’ll see Glycine re-develop or to resurrect some of its movements of the past. That would be nice, but probably unlikely. 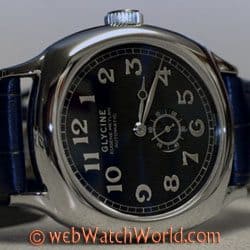 At least the Eugène Meylan uses what some consider to be a higher grade — or at least higher class — ETA movement. The ETA 2895-2 housed in the watch is based on the ETA 2892 movement described here.

The 2985-2 is interesting because it causes the watch to appear like its being driven by the ETA 6498-1, which is a large manually winding, non-hacking pocket watch movement found in some of the largest mechanical wristwatches today, such as the Glycine KMU 48 with its 48 mm diameter.

But the smaller-diameter 2895 movement can be fitted into a watch with a smaller case, which makes watches that use it more accessible than the huge 44 mm to 48 mm case size of the 6498 watches.

The Eugène Meylan is big enough, with a diameter of 42 mm. In fact, some think that 40-42 mm is the perfect size for a modern watch — not too big, not too small. It takes a large wrist, perhaps over 7.25″, to comfortably wear a wristwatch that is 44 mm or greater, and too many owners with smaller wrists fit very large watches, which often look like a mis-match. The Eugène Meylan is proportionally thick at 12 mm, including the very slightly domed sapphire crystal. 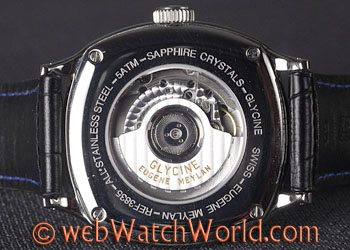 Because the Eugène Meylan is a historical showpiece for Glycine history, the company has been a little more extravagant in the final detailing and finish. It has been available in several face colors and the current catalog lists a black face, white face and this stunning blue face with nickel hands and numbers.

The highly polished case is apparently finished by Glycine with a 40 micron thick chrome plating. Glycine was known for its thick gold plated watches in the past, so perhaps this is a nod to that history.

The watch shown in the photos is actually difficult to photograph because it is so highly polished. The deep sapphire blue face is offset by the solid nickel numbers, which are in a font very reminiscent of the 1930’s and it is a font that isn’t commonly seen today.

Unlike the ETA 6498 movement that one may assume lives in back of the Eugène Meylan’s face, the 2895 is both an automatic and it hacks. These features alone make it a unique watch; in fact, I’ve had more than one watch collector tell me that the watch could not be an automatic, despite the word “Automatic” clearly visible on the face!

The 27-jewel movement of the 2895 beats at 4 Hz, or 28,800 bph (beats per hour), which causes the small seconds hand to appear very smooth as it arcs through time, with its individual ticks nearly indistinguishable from each other.

This is also a very accurate wristwatch, running within a few seconds of the NIST “atomic” clock each day. The hacking ability makes it easy to reset the time if necessary, depending upon how persnickety the owner is regarding such things.

The movement is also beautifully finished, at a level that is higher grade than some of the lesser Glycine watches. Glycine lists it as having “rhodium coated oscillating weight on ball bearing, decorated ‘Côtes de Genève’, bridges rhodium coated and decorated ‘perlé’, visible screws in blue finish.

The nickel numbers carry no lume, but they do have a very interested characteristic. When the light strikes the numbers and hands at a certain angle, they seem to almost light up with an inner glow, which is very unique. This can be seen in the last scenes of the video included above.

This feature, combined with the sharply pointed seconds hands and clearly delineated minute chapter ring around the outside of the watch (itself reminiscent of pocket watch styling), makes the watch very easy to read. It catches the light in a way that is quite different from other watches. The deep blue face also looks fantastic as it catches the light at various angles, and any owner will certainly get more notice with the blue-faced Eugène Meylan than any other watch.

Glycine watches are usually found at varying discount levels, so it’s sometimes difficult to tell what the “real” list price is for a particular model. Also, the rarity of some Glycine watches, such as the Eugène Meylan, the F-104 and others, can make it difficult to find a dealer willing to quote a hard price.

Nevertheless, the Eugène Meylan is usually found with a full list price of $1,599.00, which is reasonable for a watch of this quality and relative rarity. The various Eugène Meylan face colors have come and gone in vogue, but the blue with nickel apparently remains popular because it has continued in the Glycine lineup while some of the other variations have come and gone.

The watch shown in the photos came with the standard Glycine deployant clasp, which was replaced by a nice dark blue, lined leather strap with contrasting blue stitching. This strap is a perfect match for the face.

The watch shown here weighs 86 grams with its blue strap. The Eugène Meylan has a nice presence; not too heavy but it feels very solid — almost as if the nickel used in the numbers and hands gives it mass. You can “feel” the nickel; that is, the watch almost feels as if it is carved out of a solid billet of that metal.

The width between the lugs is 22 mm, so the combination of the 42 mm width (sans crown) and 22 mm strap width are a perfect match and very proportional.

The square-and-round case is both retro and modern. It isn’t something seen every day and it definitely attracts attention. But the 12 mm thick, highly polished case with its beautifully curved edges fits under just about any shirt sleeve and the Eugène Meylan is also one of those rare specimens that looks both dressy and sporty at the same time, all while exuding an elegance not found in more common wristwatches.

A beautiful example of the watchmaker’s art, with a highly accurate and modern ETA movement. The Eugène Meylan has an all-retro look but with the amenities, size and technology expected in the 21st Century.