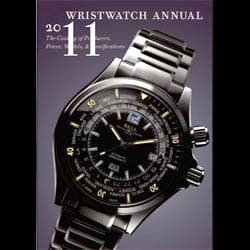 Summary: An interesting and somewhat obscure book that covers the history of the famous Glycine Airman 24-hour watch. The translation to English is somewhat flawed however and it could use one more trip through the editor. Some of the sections need more detail to help the reader understand the background of this long-lived watch series. 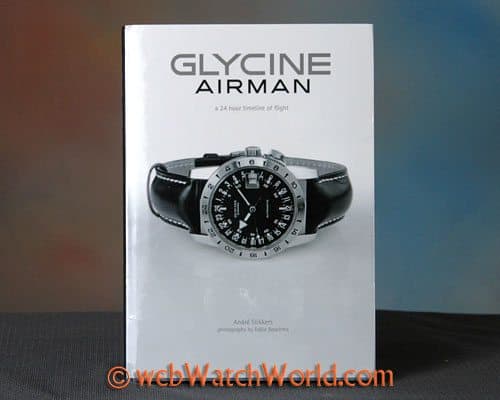 André Stikkers is a Glycine Airman collector and a 24-hour watch fanatic. He runs the “24HourWatch.info” website, based in the Netherlands, which has a wealth of information on all types of 24-hour watches.

André is also active in the various watch collector forums and when word spread that he was working on a book about the famous Glycine Airman and he would have the cooperation of the Glycine factory, Airman collectors around the world were anxiously anticipating the results.

That book has now been published in in the Netherlands by André, along with Drukkerij Tielen, who designed a handsome little edition measuring 8.5″ by 6.25″ by 0.5″ thick.

The book is very nicely bound and printed and it includes many photographs of the famous Glycine Airman, from the first generation to the most recent Airman Base 22.

The first half of the book is an overview of the history of this watch, while the second half features two-page spreads with a single page photo of each Airman on the right and the details on the left-hand page.

Although I very much like the subject matter (of course) and the reasons for writing the book, I’d suggest that the book could use another going-over by an editor. I’m not sure if it was perhaps translated into English, but my feeling is that the writing is somewhat grammatically challenged and the flow of ideas isn’t as smooth or progressive as it should be. These problems unfortunately can make the information seem incomplete or at least not as descriptive as it could be.

For example, in an historical topic such as the history of the Airman, I think the author should start the reader off with a solid background of the Glycine company history, to serve as an introduction to why the Airman came to be developed.

There is much to be said about Glycine and, to be sure, this story of how this company came to be and survived through the years needs telling.

But page 14 of the book has only three paragraphs about Glycine’s beginnings, and the writing curiously jumps back and forth in time, resulting in what I think is an incomplete picture of the origins of the company and how the Airman concept became reality.

The section following that does provide somewhat of a background for the historical beginnings of the Airman watch concept.

It describes a letter, written in 1953 by Samuel W. Glur from the Montres Altus S.A. watch company (which ended up merging with Glycine in 1960), which was written to Charles Hertig Sr., who ran Glycine starting in 1953.

The letter, which is said to “mark the birth of the Glycine Airman”, described the criteria for a 24-hour watch that could be useful to world-travelling pilots and others. This is the initial idea for the Airman and the concept was a result of Mr. Glur’s discussions with an airline pilot during a Bangkok-to-Calcutta journey in a Douglas DC-4. That surely is a romantic beginning for a classic watch! 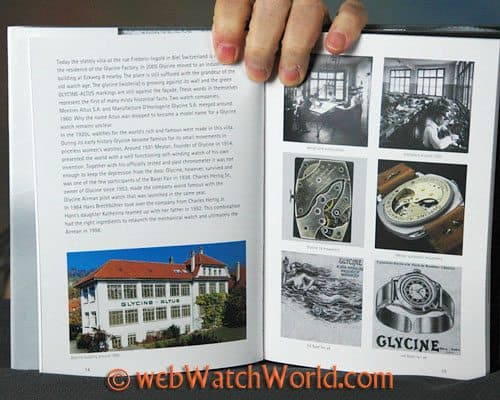 In the following chapters, the book proceeds through the five generations of the Glycine Airman, covering 57 years and counting, until the most recent (2010) Airman releases.

I found these sections a bit of a tough read, mostly because there just isn’t enough continuity or flow of thoughts and concepts from one section to the next.

The book’s publisher doesn’t help much here either, because some of the paragraphs are spaced with only a carriage return while others have the correct white line space in between paragraphs. This inconsistency gives the book an unfinished appearance and it is a bit jarring to the eye to have to move back and forth between formats.

It has always been my understanding that the Airman was very popular with the pilots of the Vietnam war and others, who really brought the watch into world consciousness in the 1960’s, and I think this would have been an important and interesting part of the story that should be elaborated.

However, this section instead consists of only two-thirds of one page of this information, and it includes but a single photo of an unnamed pilot who appears to have an Airman on his wrist.

It’s almost like something has been dropped from the printing by mistake, because the narrative starts out by describing a pilot named William E. Murray, who is said to be “one of the first Airmen who actually bought the Airman PM/AM in Japan around 1953”. But the story ends suddenly, with not a bit of information on which Airman he purchased, how he used it or why.

The second half of Glycine Airman: A 24 Hour Timeline of Flight is a descriptive reference of each Airman watch version made by Glycine. This section does include some very nice photos by Eddie Boschma, but the descriptions of the various Airman are very brief and some are missing a piece very important information — how the Airman models got their name.

Part of the allure of the Airman watch is the unique and interesting names the versions have received through the years. But other than the chapter devoted to the Airman SST, none of the descriptions in the reference section tell us why or how each of the Airman watches got their names.

For example, it would be nice to know how examples like the Airman 2000, the Airman Plaza Mayor, the Airman 17 and 18 and others were named and their significance. (UPDATE: André wrote to say that the explanations are in the book, apparently I missed them.)

I feel uncomfortable expressing what will certainly appear to be a negative opinion of André’s book, but reading it does leave me with mixed feelings.

Unfortunately, I can’t say this is a fantastic read when I don’t think that’s the case. Alas, this is the nature of opinions — like a nose, everyone has one (and they’re not all pretty)!

I would have worked with the author to help ensure that the narrative flows more smoothly. And I certainly would have been closely monitoring the publisher and printer to make sure the text was correctly formatted. 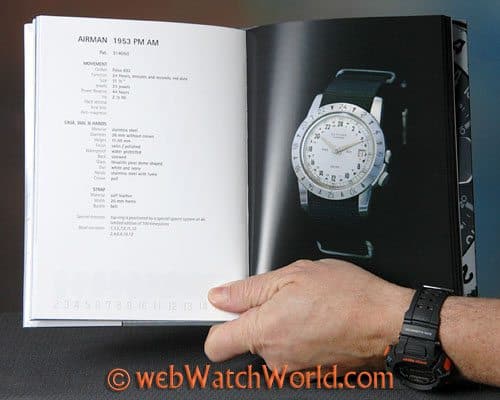 On the other hand, I certainly have a great appreciation for the effort that was undertaken here and also because this is a milestone book about an iconic watch.

One note about the book’s distribution: It isn’t easy for Airman owners and fans to purchase a copy. It is unfortunately not available through the normal bookseller channels or through the European or American Amazon.com system.

Instead, one must purchase it directly from Glycine through a rather clumsy ordering system (although they apparently now accept PayPal). The ordering information is buried in the Glycine company news section of their website.

I also feel bad about expressing my feelings here because the book was given to me as a gift, in an extremely nice gesture by a fellow watch forum member to whom I had sold a Glycine Incursore recently.

The 2011 edition of this yearly watch industry classic is now available. This year, over 1,400 wristwatches are included, with fantastic color photos and specifications for each watch.

The book is arranged alphabetically by manufacturer and each manufacturer lists the specifications and materials for each watch, including price, movement, special features, complications, case, dial, band, and available variations of a particular model.

Don’t forget the bib and the roll of paper towels you’ll need to wipe off the drool!

Wristwatches: History of a Century’s Development 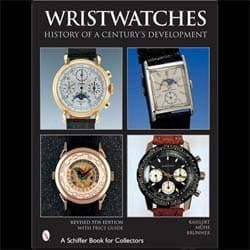 Very popular book, now in its fourth edition. Includes over 1,800 photographs illustrating the history of the wristwatch.

Includes pricing for a variety of watches, including chronographs, calendar watches, alarm watches, watches with moon-phase indicators, military and aviation watches, and even electric and quartz models.

Both men’s and women’s styles are included, and the book includes advice on collecting and preserving antique watches.

Buy It!  Wristwatches: History Of A Century’s Development

In the end, all I can do is give my opinion. The upside is that surely every Airman owner will want to have a copy of the book, and perhaps not everyone will feel as I do about its shortcomings.

I would guess that the book was intended only for Glycine collectors, but I think with a bit more work — perhaps in a second edition? — a wider distribution to a more diverse audience would be not only possible, but very much welcomed. This would then allow more potential Glycine owners to learn about the brand, the great wristwatch and its great history.