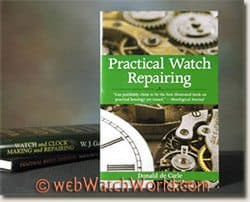 Summary:  Highly detailed book that describes the tools and techniques needed to maintain mechanical watches of all types. Although there is way too much information and complexity for the average collector, it’s a fascinating look at what’s inside a watch case and everything that makes it tick. 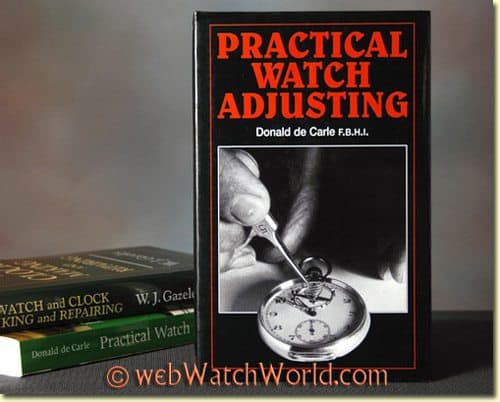 Judging from the introduction on the book’s jacket, Donald de Carle was a master horologist. Unfortunately, a web search doesn’t reveal much more; for example, there’s no Wikipedia page on de Carle, and based on what I understand of the man after reading his books, this is a shame.

de Carle left us in 1989, but fortunately he was one of a rare breed who had both supreme technical ability and who was also able to put his vast knowledge of watchmaking into a series of books and papers that are considered to be some of the best primary sources of information available in the profession.

He was a Fellow and Medalist of the British Horological Institute (which is still in operation) and a Freeman of the City of London “by virtue of being a Liveryman of the Worshipful Company of Clockmakers”.

I’m not sure exactly what that means, but it certainly sounds impressive — and you’d think it would be enough to deserve a Wikipedia page. Perhaps he at least had a key to the city that allowed him access to all of the buildings, museums and wonders thereof.

The dust jacket also tells us that de Carle contributed to the Encyclopedia Britannica and that he was the author of many horological books, including the companion Practical Watch Repairing (see sidebar) and many more.

His books are incredibly detailed brain dumps of his knowledge. They are filled with line drawings, charts and graphics covering all aspects of maintaining and repairing wristwatches. In fact, one part of me thinks the books are much too technical for anyone but the budding watchmaker or the very serious collector.

But on the other hand, the knowledge gained by taking the time and making the effort to understand the techniques will be greatly rewarded by a much deeper understanding of what makes a watch tick.

Practical Watch Adjusting (and Springing, according to the title page) is not for the person hoping to simply learn more about keeping a watch timed. It’s more like a textbook for watchmakers, written in a technical format that, frankly, doesn’t make for very good bedtime reading for anyone other than insomniacs.

When I bought the book, I thought perhaps it would teach me a few basic tips on how to make my Vostoks and Glycines run more accurately.

But it’s much more than that; in fact, Practical Watch Adjusting was a real eye-opener for me. If I have been left with one impression, it’s amazement at how complex a watch movement really is and the amazing technology and science that makes it work.

I’d say that the vast majority of information and details in this book are way beyond what I will ever or would ever need for my basic watch collecting. Someday, I would like to attend a formal training class on watch making, and it would be then that the book would be most valuable.

Until then, however, I think it’s mostly useful to illustrate what it really takes to make a watch not only run, but run accurately.

de Carle starts with the basics of watch springing and timing, and the reader will learn that there is so much more to a mainspring than a simple wound piece of wire. There is a great deal of science to be found in this simple part, including several pages of diagrams on various winding techniques for coiling a spring.

Next up in Practical Watch Adjusting is Cleaning and Oiling. Most owners may not even realize that there are several different types of special oils used in a wristwatch and these oils must be applied in a very specific manner to help make the watch work correctly. de Carle covers this in great detail and also shows us how to make some of the oiling and burnishing tools needed for the job, along with many good tips on doing it right.

Also covered are topics such as Balance Pivots in Chapter 3; Fitting a Flat Balance Spring in Chapter 4 (a task much more complicated than it sounds) and Positional Timing in Chapter 6.

The book was first written in 1964 and has gone through several revisions since. In 1977, de Carle wrote a preface to a reprint that basically states that there was nothing to add; all the techniques remained valid.

I believe he would say the same today, with perhaps the exception of the electronic timing tools available to just about everyone. But those machines don’t really add anything other than, perhaps, some rapidity to the timing procedure. 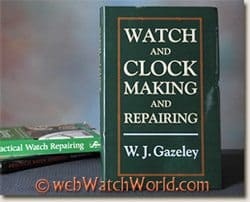 Originally published in 1953, before the Quartz Age, Gazeley’s work goes into some detail on making and using specialized watch tools. It also contains detailed descriptions of constructing and repairing many different types of watch and clock movements, including chronographs and chronometers. Review coming soon.

Buy Watch and Clock Making and Repairing at Amazon.com.

Not for everyone, and don’t expect some quick techniques to make that Orange Monster run within COSC specs overnight.

But if you’re willing to make the effort to get through the rather dry and technical tone of this book, you may end up learning way more about the science of watch timing than you every thought existed.