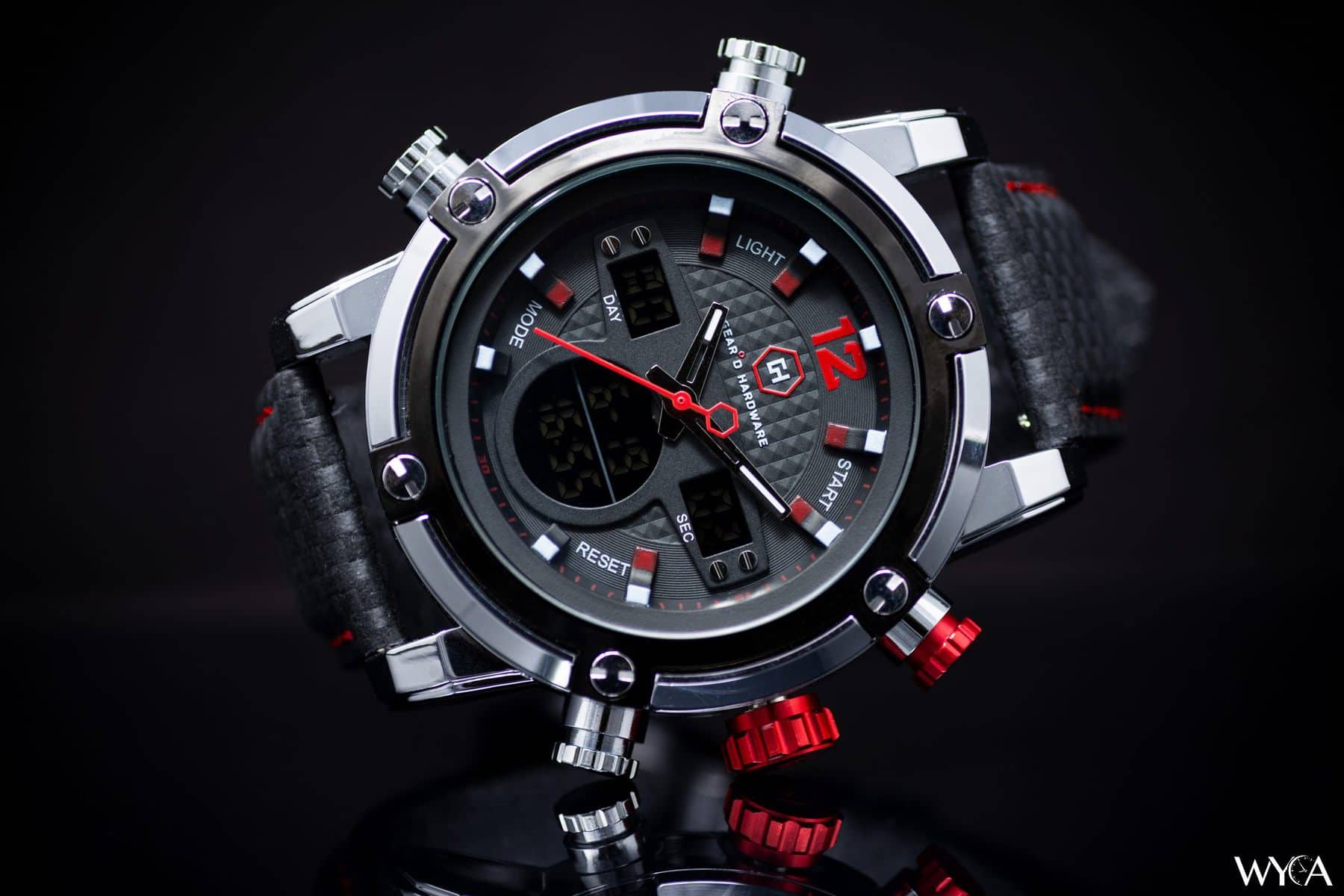 A 50mm Analog-Digital Combo With an Attitude problem.

Words/Photography: Me. Gear’d Hardware provided this Juggernaut at no-charge for the purposes of this review.

When I was a kid I was an avid comic book reader. My dad collected Conan the Barbarian, and I took an interest in the X-Men. My favorite was Wolverine (obviously), and what I really liked about them is that they always had a host of baddies that they were constantly slugging it out with.

But the baddie I’m thinking of is one of Marvel’s most underrated: Juggernaut, an immortal avatar of the mysterious entity Cyttorak. Nigh invincible, Juggernaut proved to be one of the X-Men’s most physically daunting and challenging foes.

Like the fictional character that shares its namesake, the Juggernaut by Gear’d Hardware evokes images of massive muscularity, steel, and strength.

Given that the brand is founded by a jacked-up bodybuilder, it shouldn’t surprise anyone that the Juggernaut watch is built and styled as over the top as it is. With a diameter of 50mm – not counting the four pushers – the Juggernaut as big as its name implies and can really only be pulled off by guys with arms the size of tree trunks.

If you’ve ever read one of my reviews before, you know that as the founder of the wimpy wristed society, said “tree trunk” description doesn’t apply to me. 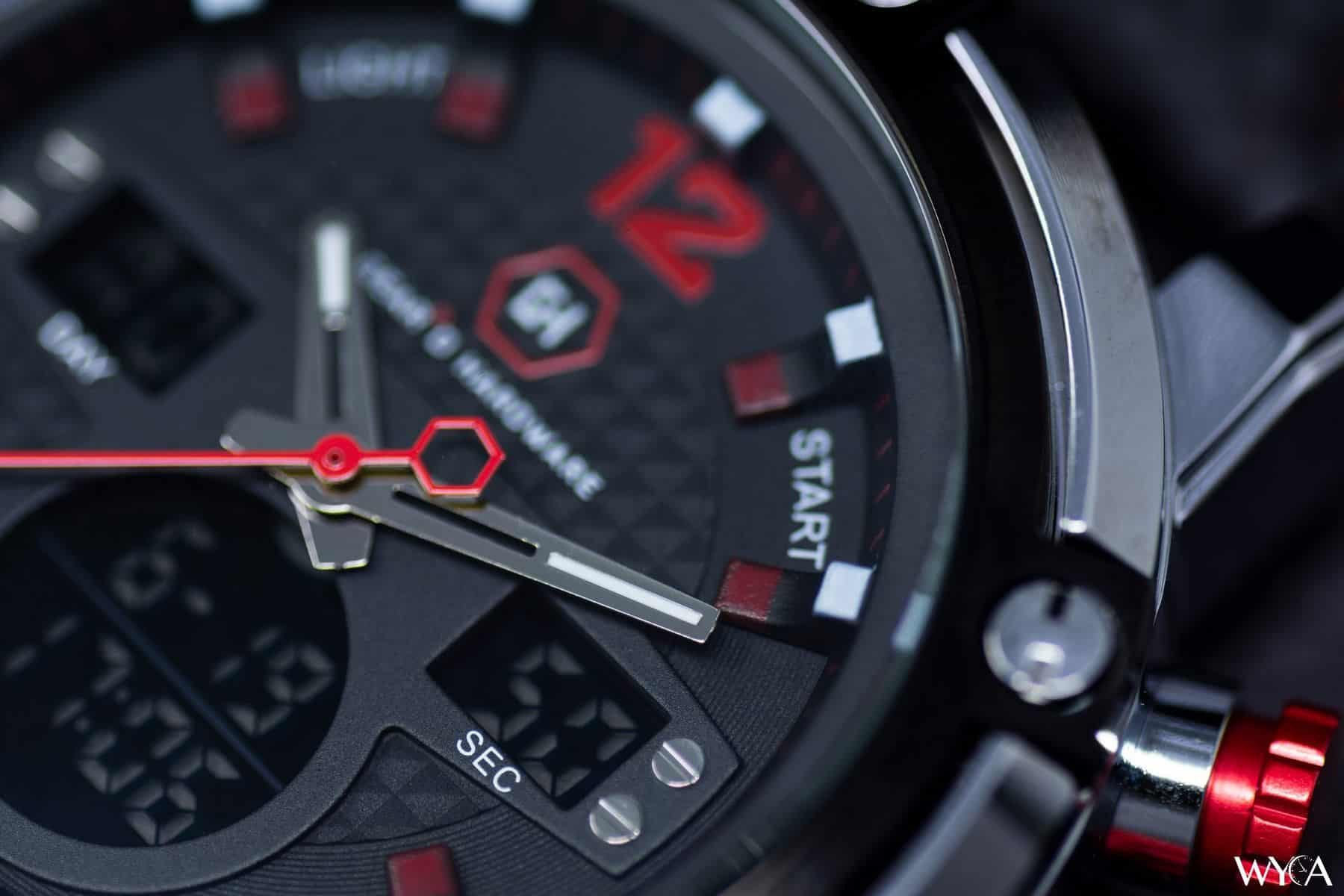 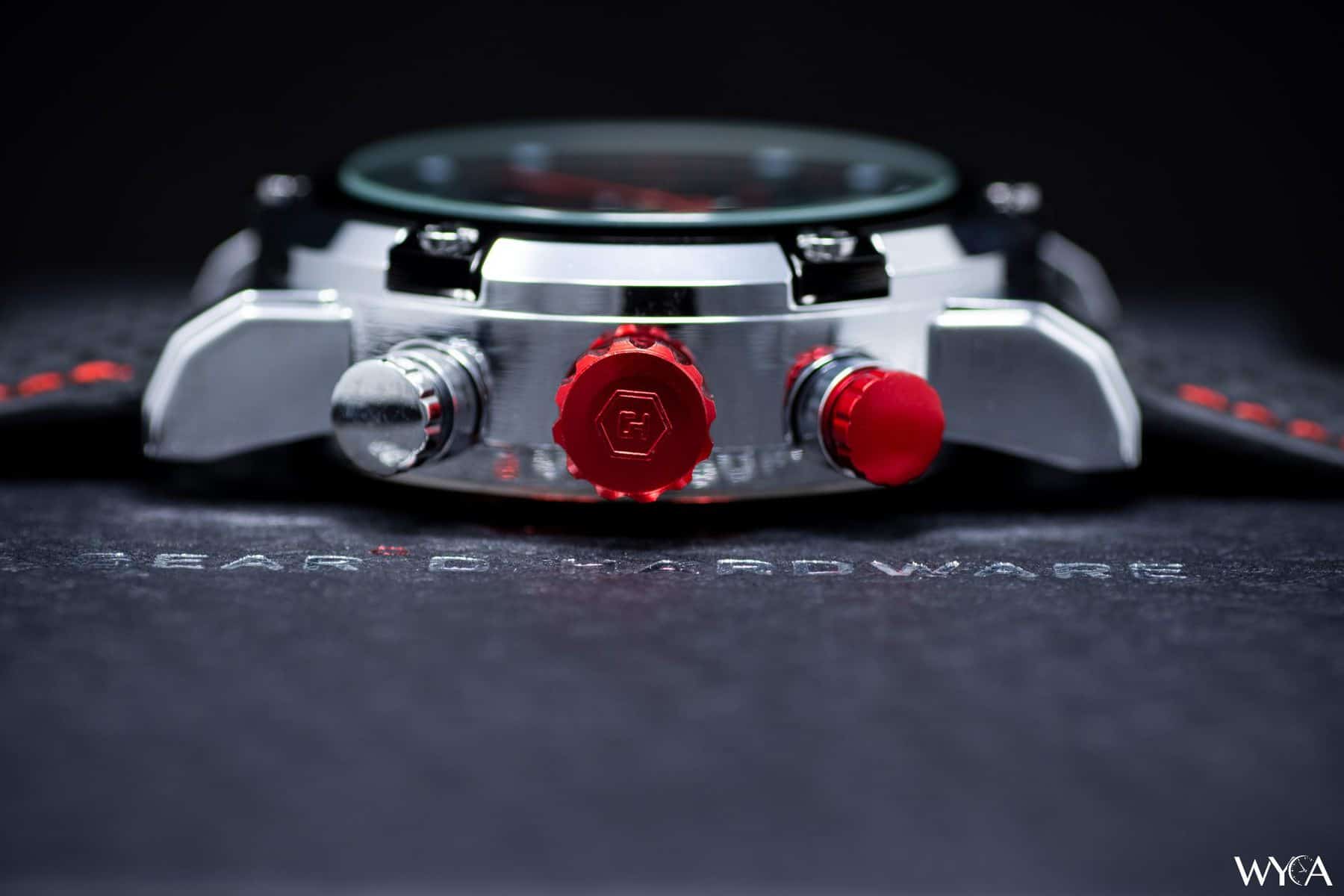 Okay, this watch works out!

Let’s set the tone of the review: this watch is a display of aggressive excess, and while it appears to be as tough as its marketing wants you to think it is, the Juggernaut leaves a lot on the table in terms of build quality. Of course, just because it doesn’t have top-grade finishing doesn’t mean that it can’t bore a hole through a mountain.

But we’ll get to that.

The Juggernaut is imposing. It’s that swole weight room lifer that just oozes the get out of the squat cage vibes, and I guess that’s supposed to be part of its appeal.

The last watch I reviewed was the LIV Rebel, and in that review, I made note of the Rebel’s hefty proportions. Sitting next to the Juggernaut, the Rebel is a pint-size participant. As large as the Rebel is, the Juggernaut eclipses it in every way. 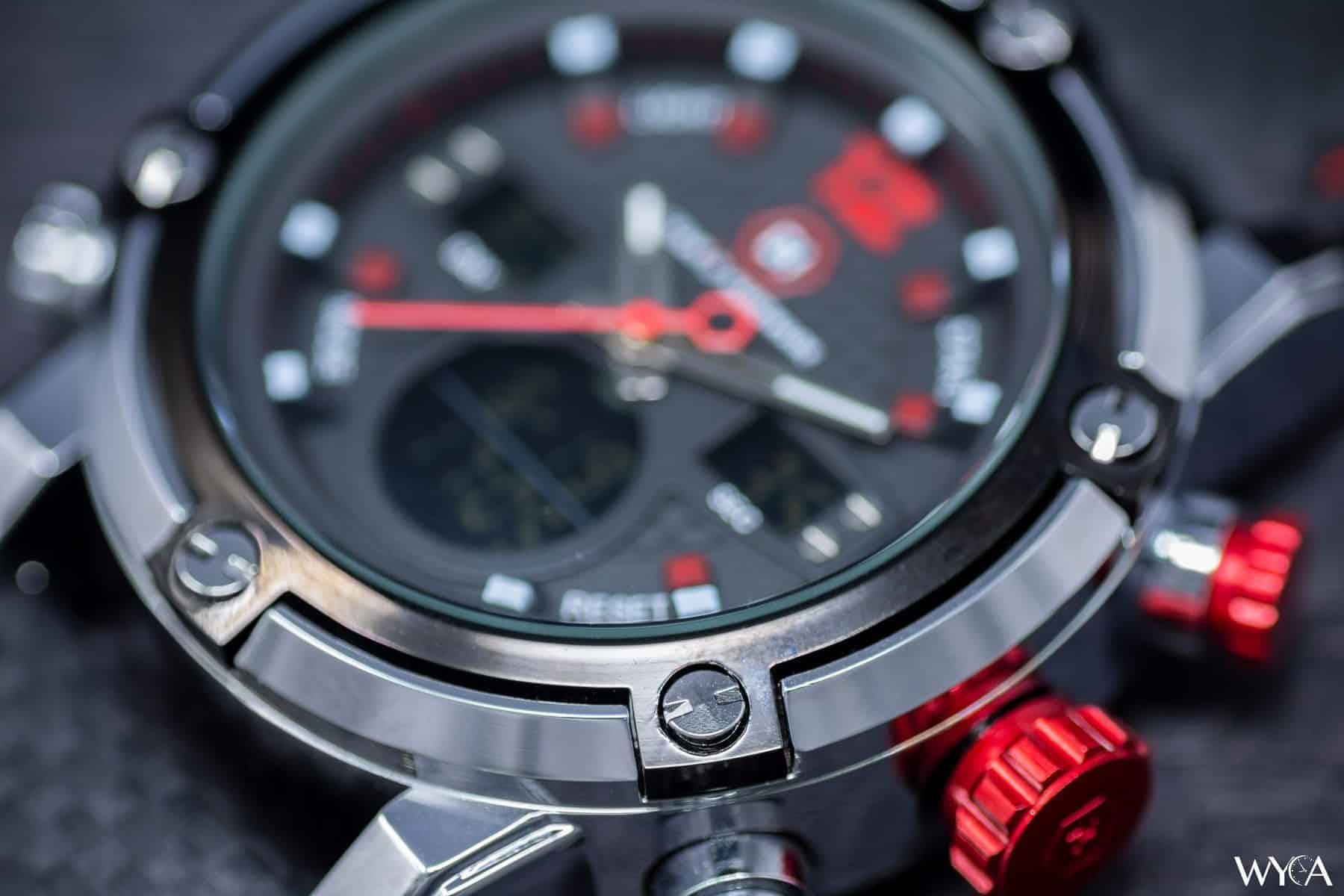 It may be tough, but it isn’t polished

Okay, so let’s remove the size of this watch from the conversation. We know it’s big.

The model I have here includes a faux-carbon fiber strap with red accents, a matte-black dial with silver hour and minute hands and a red seconds hand, a red ion-coated crown, and a red-accented chronograph start pusher.

The dial has three cutouts where digital displays are visible. These displays are backlit and display the time, day/date, seconds, alarm settings, and chrono. The pusher at eight o’clock switches the mode, visible in the digital display at six o’clock, and the rest of the pushers are clearly labeled and easy to use relative to the mode you’re in. 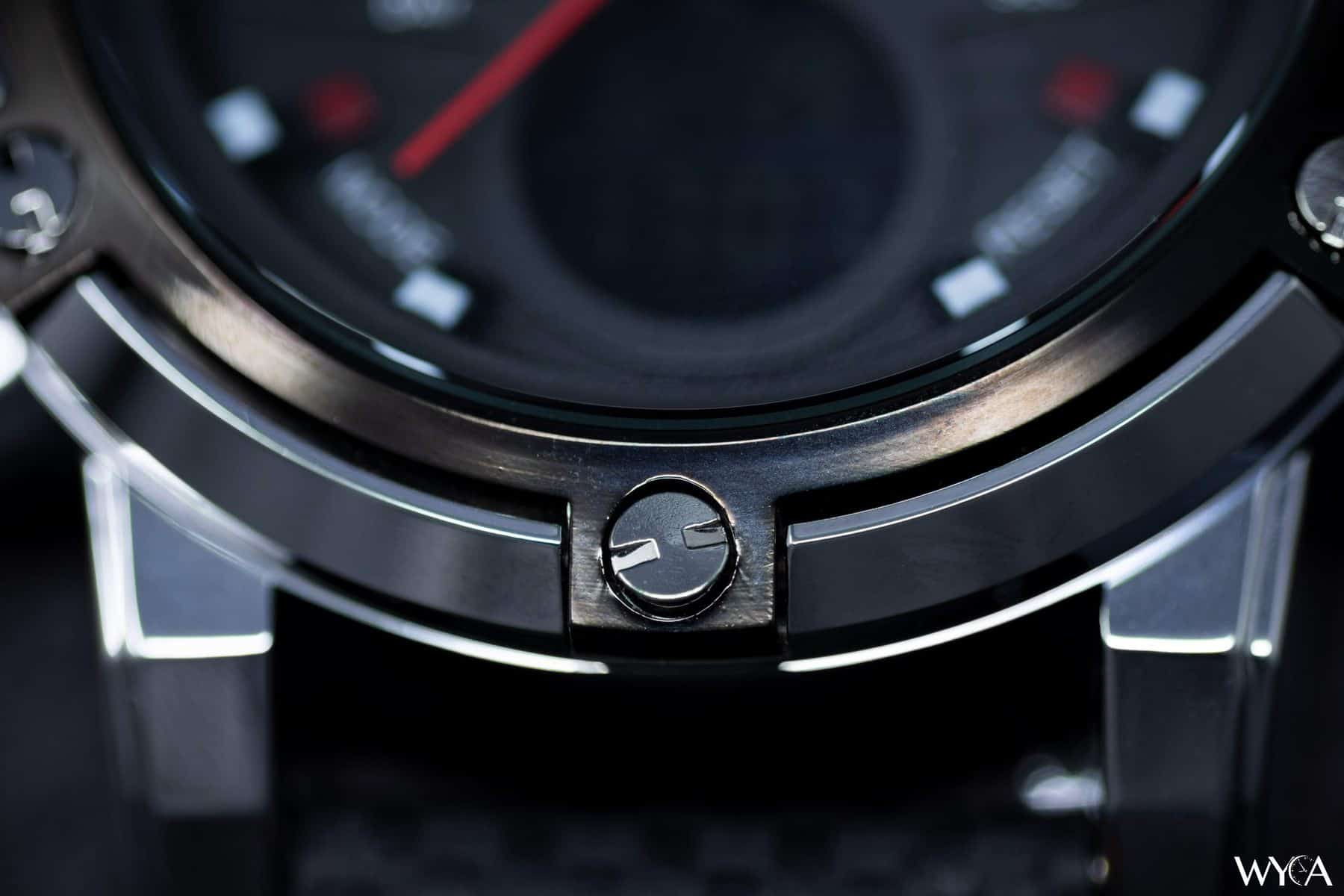 The dial is really quite simple and doesn’t match the macho exterior. There are a few red accents on hour markers, but otherwise, the dial is pretty muted. Telling time is easy day or night thanks to the backlight, which lights up the LCD screens. The digital display and analog hands can be set to two different times, as well.

When you look closely, you’ll notice that there are small blemishes in the finishing around where the screw holes were drilled, and there is also some wear on the finish of the surrounding metal as well. Every screw looks similar, and while you won’t notice it with an offhand glance, you can see it with your unaided eye. 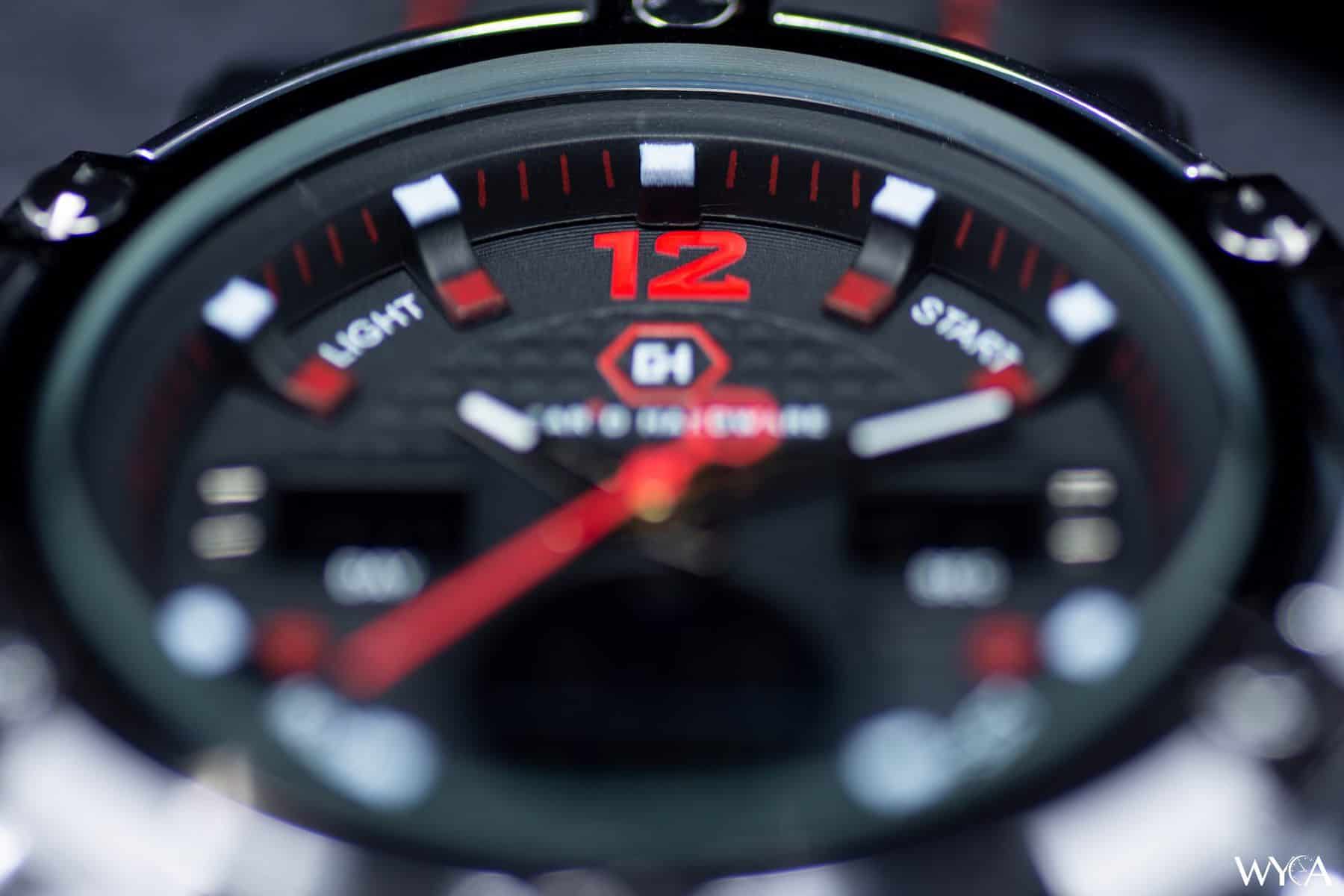 The finishing on the dial itself is okay, and there doesn’t appear to be any dust trapped inside. The LCD screens don’t have any dust on them and are properly aligned. There are small blemishes on the edges of printed cutouts, as well as the tips of the hands – you can’t see these with the naked eye.

You can see how deep this watch is. The hardlex crystal feels like it’s miles above the face, a visual feat aided by the thickness of the crystal. 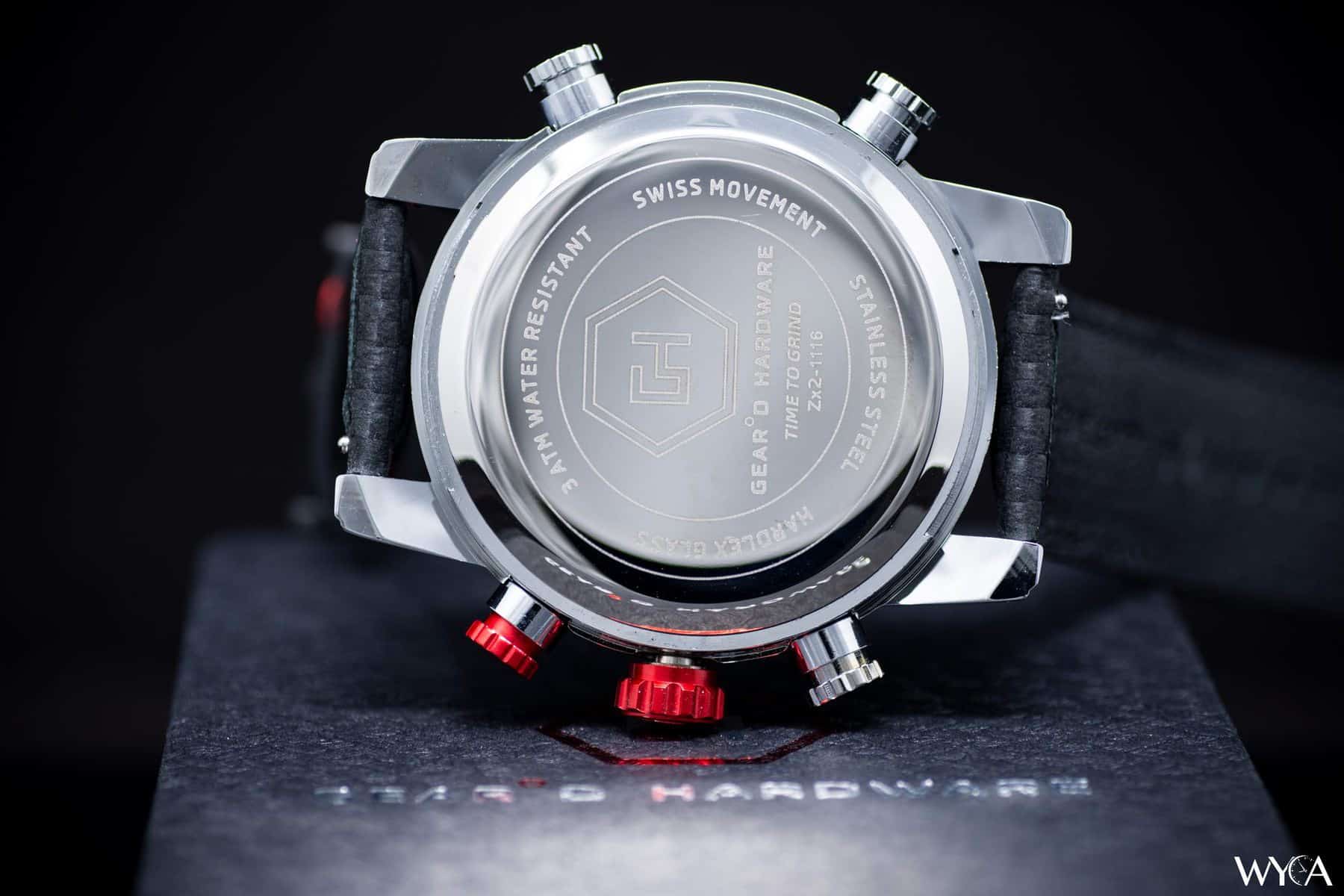 Another oddity is the mystery movement. The Gear’d website says the movement is a Miyota, which makes sense since it is a digital-analog. However, the case back thinks that it’s Swiss. 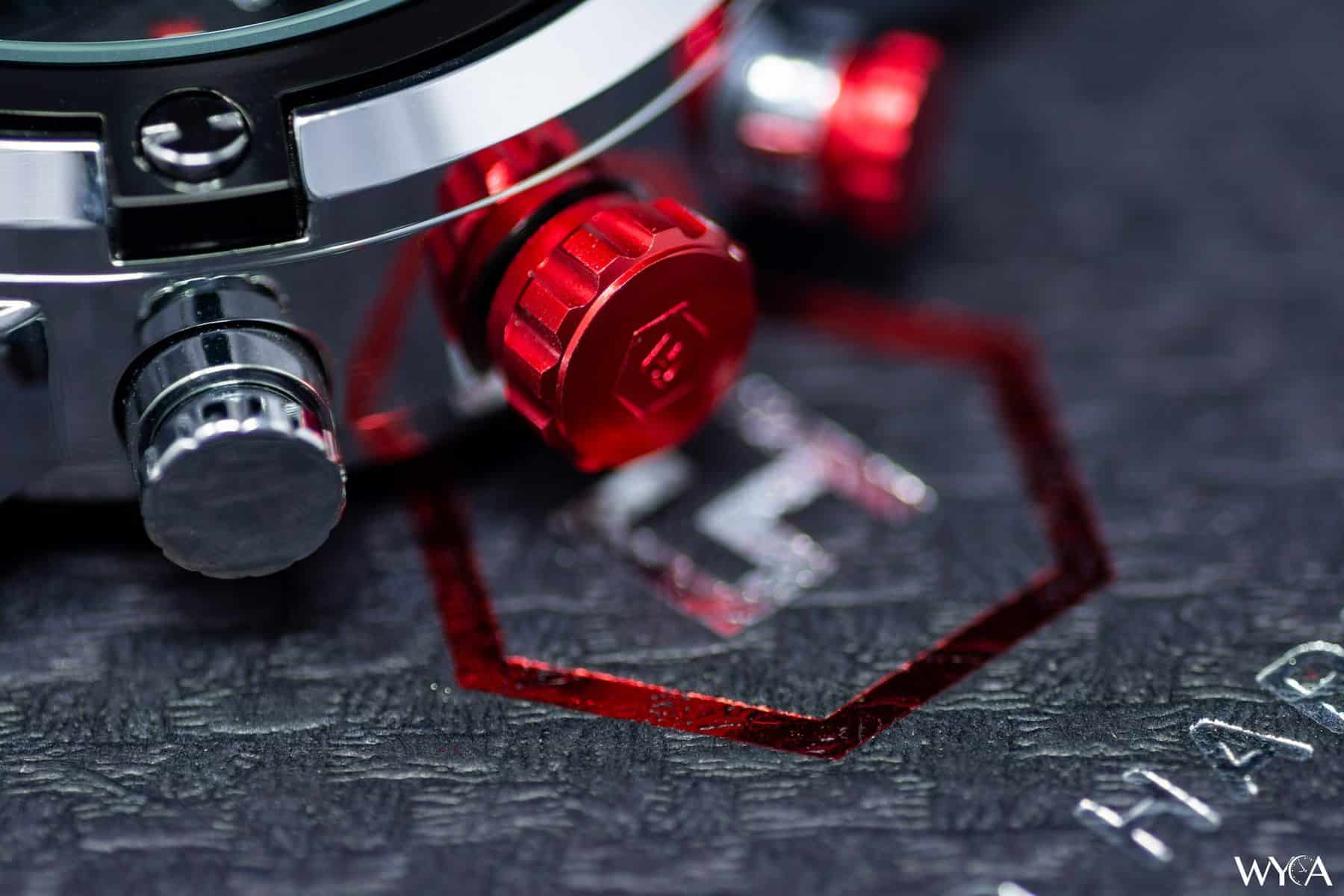 It’s Got Some Flaws in its Finishing, But Is It as Tough as it Claims to Be?

The Gear’d Hardware website is filled with images of buff dudes standing topless holding guns, busty women, motorcycles, Corvettes, and other images of hyper-masculinity. They say you need to be consistent to build a brand, and on that level, Gear’d has got it going on.

Their blog is full of useful information, although almost none of it is about watches. For every helpful watch-related post (like this one about how to change your watch buckle), there are three random posts about how you’re sabotaging your fitness goals or how to take photos of your motorcycle. Hey, I ride and run a few of the largest motorcycle gear review sites and beginner motorcycle blogs on the net, including a motorcycle site literally called Badass Helmet Store. The whole situation speaks to me as a marketer, but it feels a little forced.

Or is it? Hit up the Gear’d YouTube channel and have a look at a video showing them smashing a Juggernaut with a hammer and running one over with a Dodge Viper. The latter one isn’t that impressive – I did the same to a Casio DW-5600E a couple of years back using an Audi A3 – but that hammer trick is a really good one. A visual like that is gold.

So, in the interest of putting their money with their watch is, I decided to hit mine with a hammer. 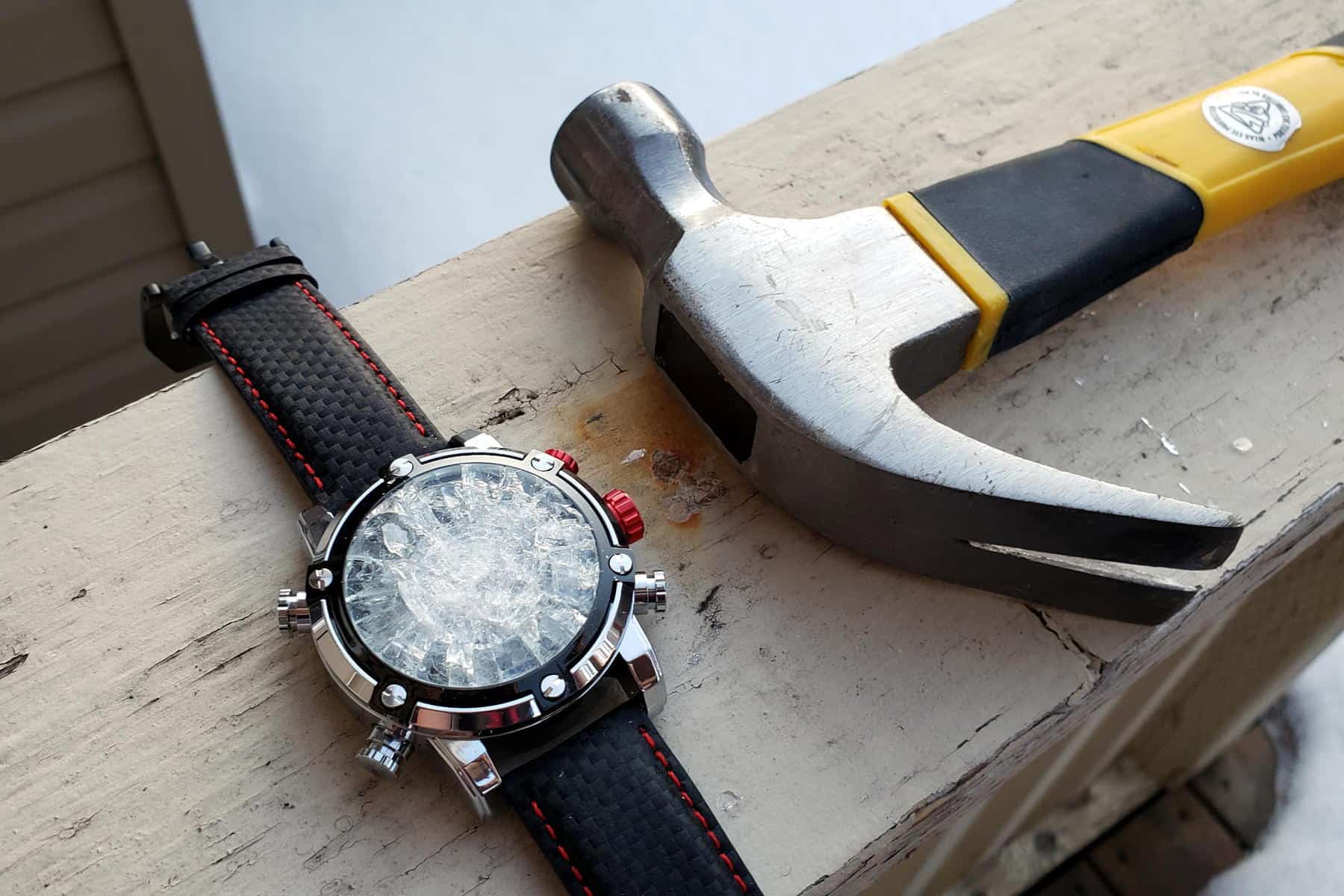 Ooookay, so let’s just take a breather. The watch failed catastrophically, and I didn’t use near the amount of force shown in their video. So, we know the Gear’d watch lacks the gear needed to survive a low-speed impact with your standard claw hammer… a test I’d never have thought to make had I not seen it already on their YouTube channel.

And honestly, I’m not really sure what the hammer test means, anyway. 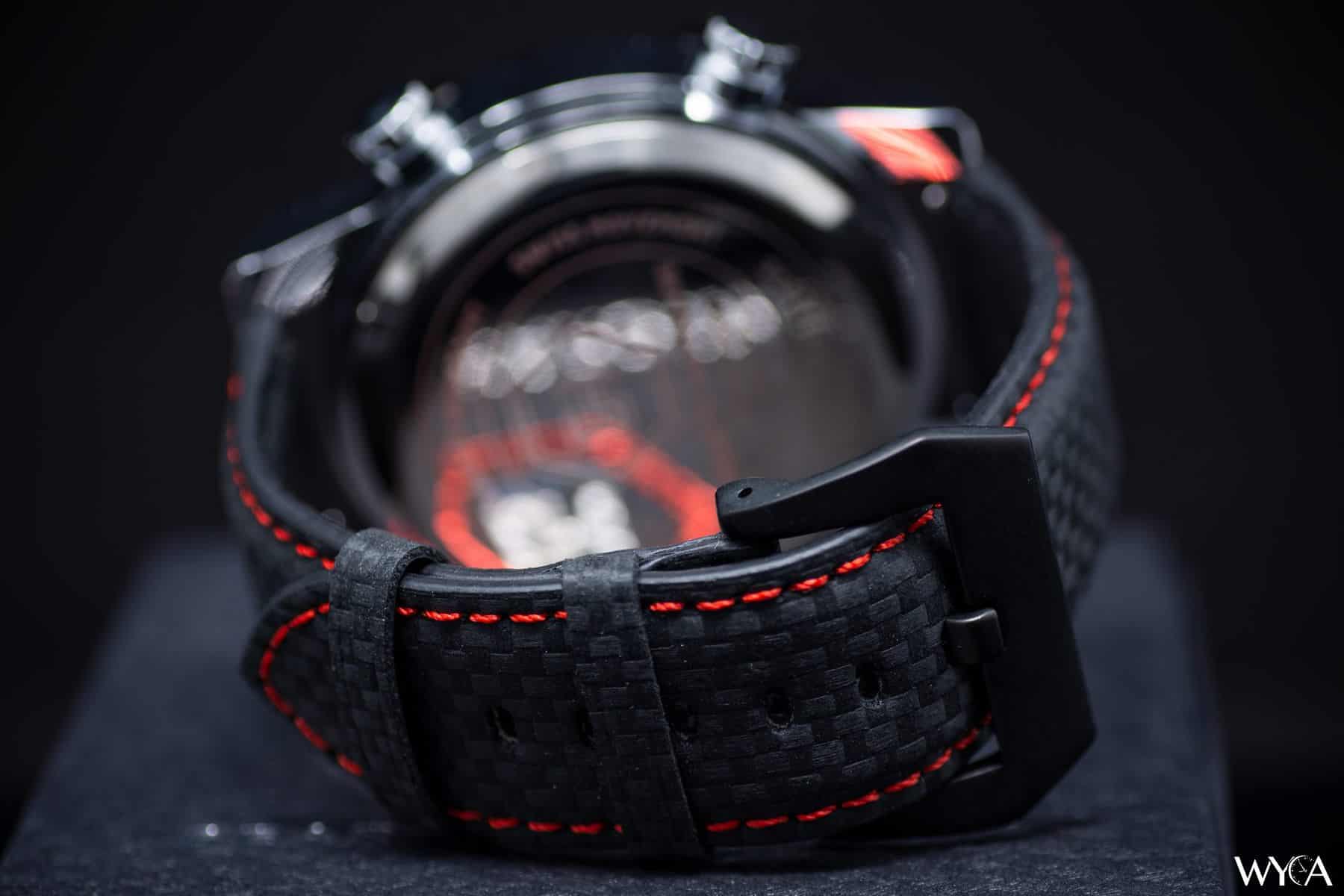 If You’ve Got 20″ Arms, There’s Finally a Watch That’ll Fit You

There isn’t enough hyperbole on the planet to describe this watch. The entire brand is over the top, kind of ridiculous, and fuelled by energy drinks and testosterone.

Oh, and the founder is one of the biggest dudes I’ve ever seen. I’ve got 17″ biceps and next to this guy I might as well be a slim jim. That’s kind of awesome in a totally not-at-all polarizing way.

There’s a certain person the Gear’d lineup will speak to, but it isn’t someone like me. I find the brand hard to relate to, the watch isn’t made as well as I want to see from a $200 microbrand, and it’s also not as tough as they market it to be. Mine is destroyed, never to be worn again, and that’s a shame… if you’re going to say a thing can do a thing, it should be able to do the thing.

Now, if you opt not to smack it with a hammer, you’d never notice a lot of what I raised in this review. After all, who looks at their watch with a magnifying glass? But if you care about those types of things, you’ll struggle with the Juggernaut.

Looks like the X-Men won their final victory after all.