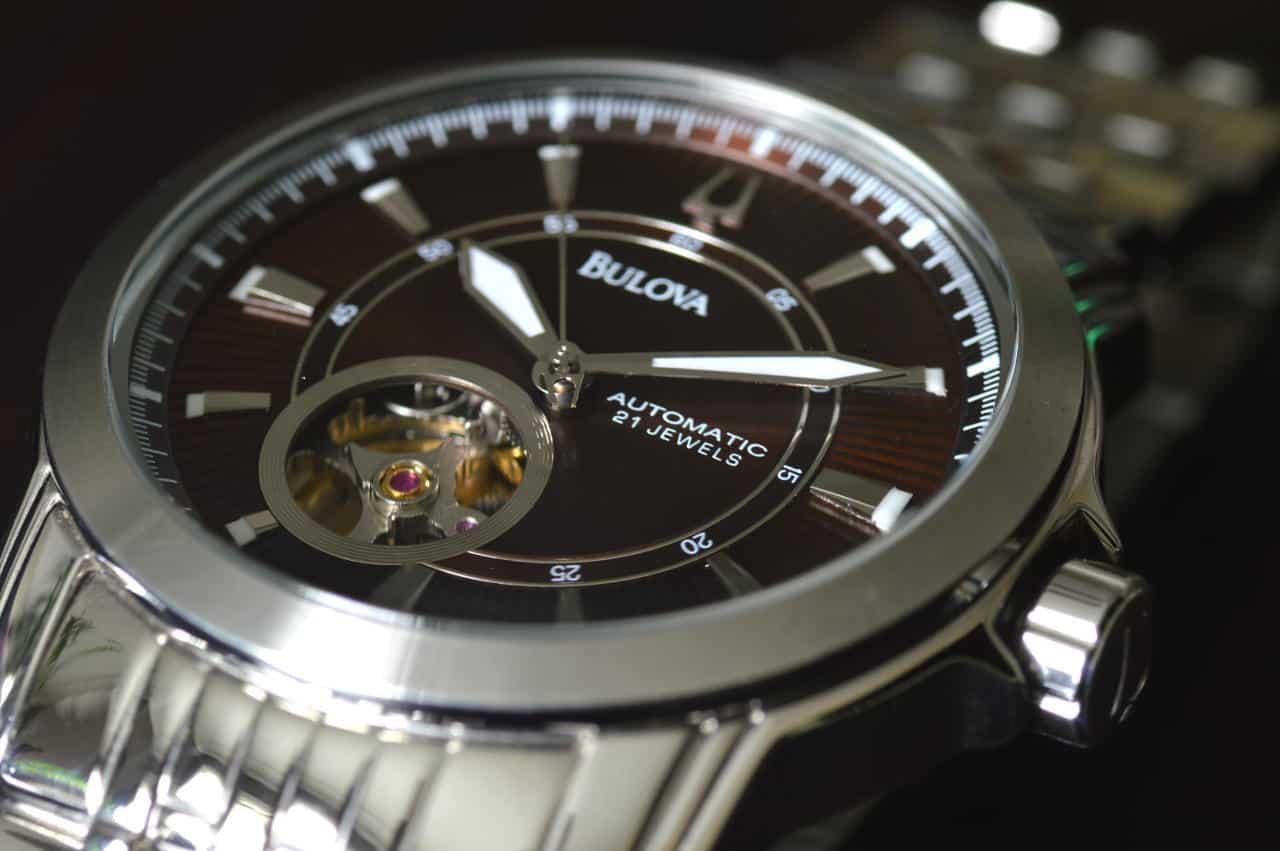 Since 1875 Bulova has been producing luxury watches and clocks. A pioneer in many respects, Bulova is perhaps best known for their “Accutron” tuning-fork powered electronic watches.

The dial on the 96A101 is a little polarizing, but that’s the only fault I can really find in this Bulova. The open heart display gives you a constant reminder of what lies beneath the surface, and the fact that this watch is built as well as it is means you’ll probably be looking at it a lot. Found for under $400… it’s a good buy. Found under $300 and it’s a great buy. 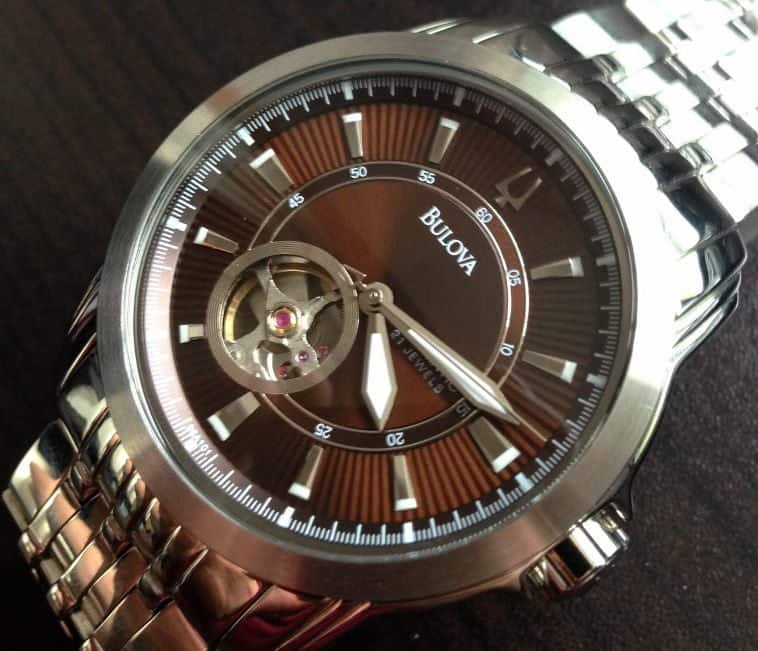 The Miyota 9015 82S0 is really Japan’s answer to the ETA 2824, and in that respect it lives up to the task. It hacks when being set, making it easy to precisely set the time. 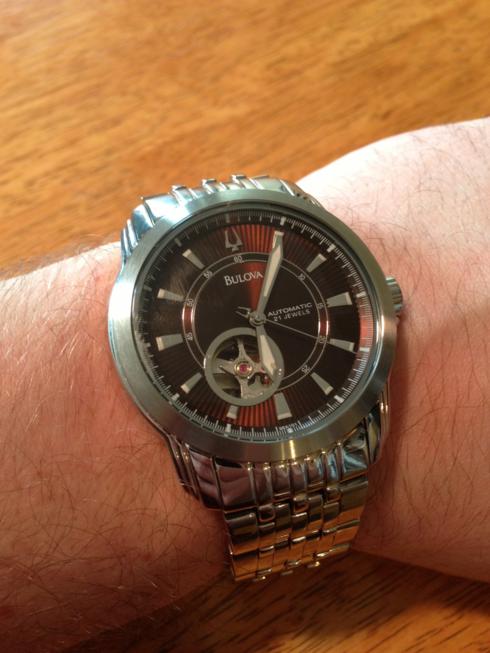 This Bulova is an interesting piece to look at. The stainless steel bracelet is serious business: it looks the part, and it’s got the weight to back it up, too. It pairs well with the open heart display at 7 o’clock, though I think it takes away from everything else.

The ridged circular brown ring that surrounds the inner dial gives a two-tone appearance, but next to all the steel it is more or less invisible. As a result, the open heart display seems very awkward. It doesn’t necessarily look bad, but it’s hardly at the top of the list for looks, either.

Bulova has placed lume on the hour markers and hour/minute hands. It’s faint, as you can clearly see (or not) in this two second exposure, but it’s there. The hands are easy enough to see, as it’s mostly the hour markers that glow inconsistently.

The case isn’t much larger than other affordable automatics that I’ve tested, but that bracelet… it’s an attention getter, and it also makes the 96A101 look much bigger than it really is. It looks awkwardly large on my wrists (7.25″ish around), and that’s almost entirely due to the bracelet.

The Bulova 96A108, which opts for a brown leather strap instead of the steel, looks much better. 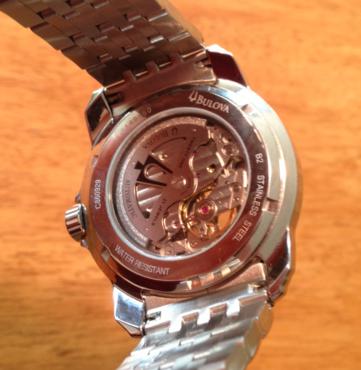 This watch is built like a brick house. It has definite presence on the wrist, though most of that is due to its weight- the 96A101 is definitely on the heavy side of comfortable.

I wish that Bulova had decided to fit a sapphire crystal to this watch. I know it would have added a bit to the price, but I think it’d have made it a better piece overall. The rest of the watch feels indestructible, making the choice of a mineral crystal a little off-base.

The case is built very well, as is the crown and lug hardware. It’s very solid, which I think justifies the 96A101’s 453g curb weight. Where some watches have a certain cheapness to them due to how light they are, this Bulova is almost the opposite: just how much steel did they use to make this thing?

With proper care this watch will last a really long time.

I’ve worn a lot of watches with stainless steel bracelets, and none of them have the feel that this one does. That’s not necessarily a good thing, though it also isn’t necessary a bad thing, either. It’s more a statement of fact.

This bracelet is wide, and the tolerances between links are so tight that the bracelet is quite rigid when held on its side.

The integrated deployment clasp feels heavy duty, just like the rest of the bracelet. 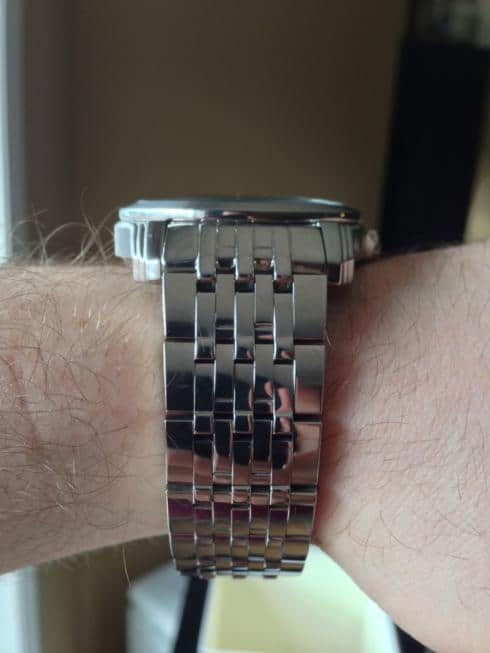 The Miyota 9000 series of automatic movements hit the scene in 2010 and were widely seen as a reliable and fairly accurate alternative to the ETA 2824. Over the last half decade it has proven to be as reliable as expected. 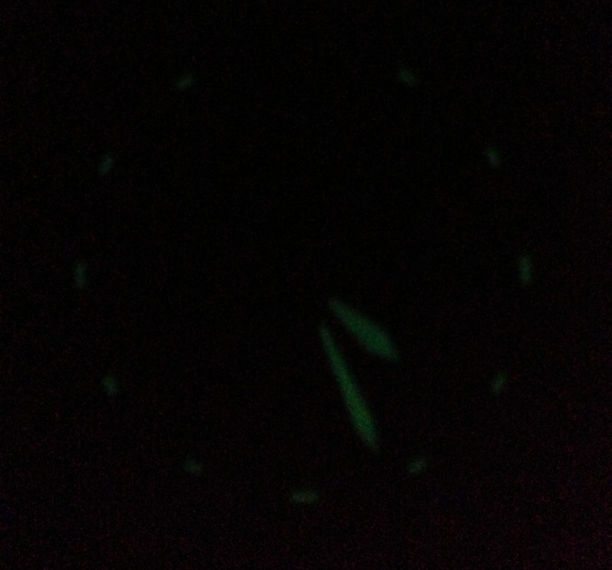 It’s hard to disparage the 96A101 considering what it offers you for what you pay. I’ve seen it on Amazon averaging $300, and I think that’s a pretty fair price to pay for a watch of this quality.

Bulova as a brand produces good watches, and while the 96A101 is absolutely positioned as an entry level automatic, it does a fine job of it. During the time that I wore it a lot of people commented on how it looks- it’s the bracelet (seriously). It makes this thing look badass… it just a let down that the dial gets totally drowned out in the process.