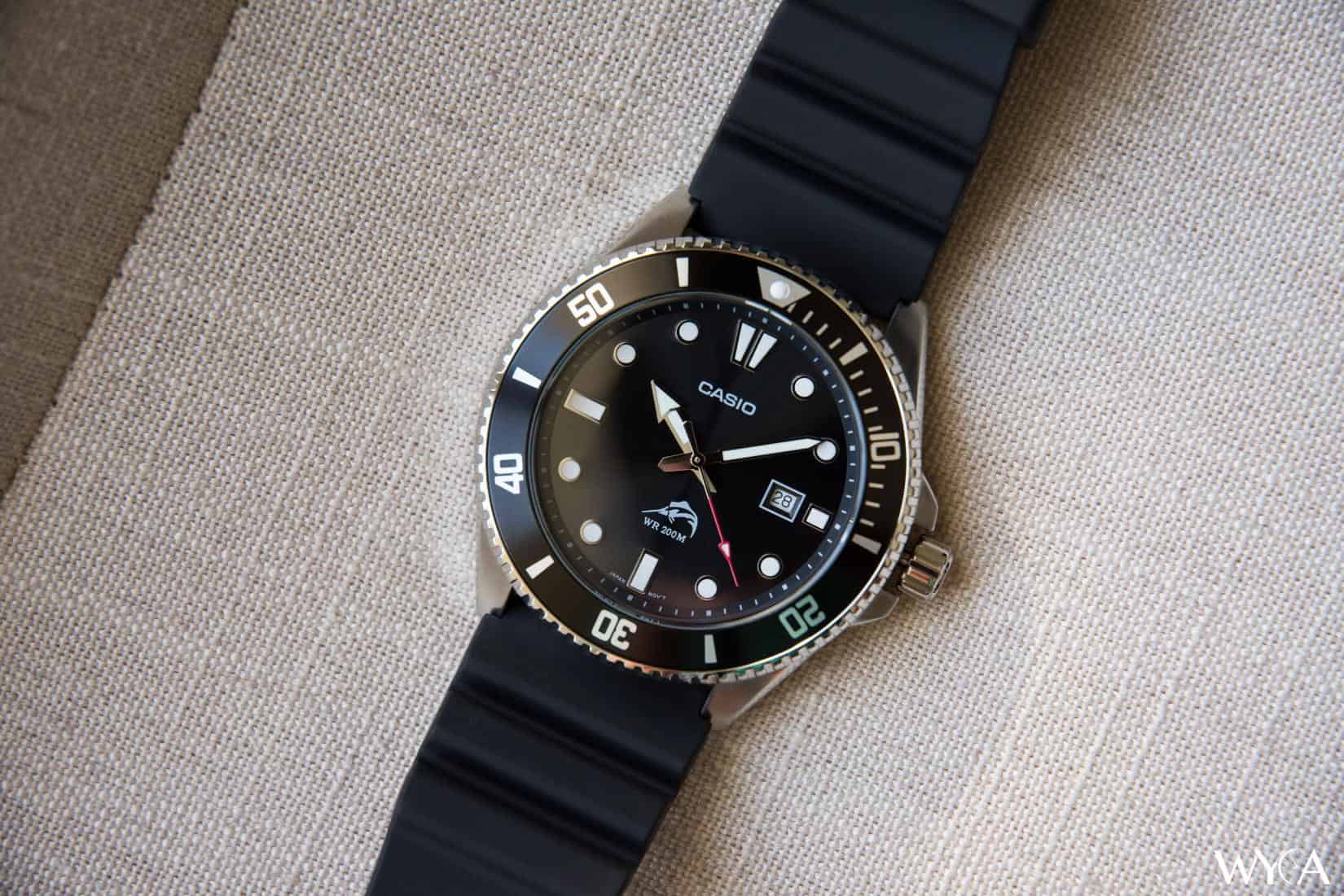 The Casio MDV106-1AV is The Best Demonstration of a High-Quality Affordable Dive Watch Available Today.

A few weeks back a viewer on our YouTube channel commented about the Casio MDV106-1AV. This “little” Casio meets every requirement I have for an “affordable” diver: it has a bargain basement price of under $75 (under $50 as of the time of this writing), is made of the right stuff (save “expensive” materials, such as sapphire), and has a 200m water resistance rating (that makes it water-ready but not necessary dive-ready- more on that below).

The MDV106-1AV is handsome for a diver, and it’s absolutely as capable as its deep-water aesthetic suggests. I had to do a double-take on it, actually, as I’d have no idea this wasn’t a $200+ watch if I hadn’t bought it myself on Amazon and paid $45 for it.

With that in mind, let’s make some waves with the Casio’s most affordable and ubiquitous diver. 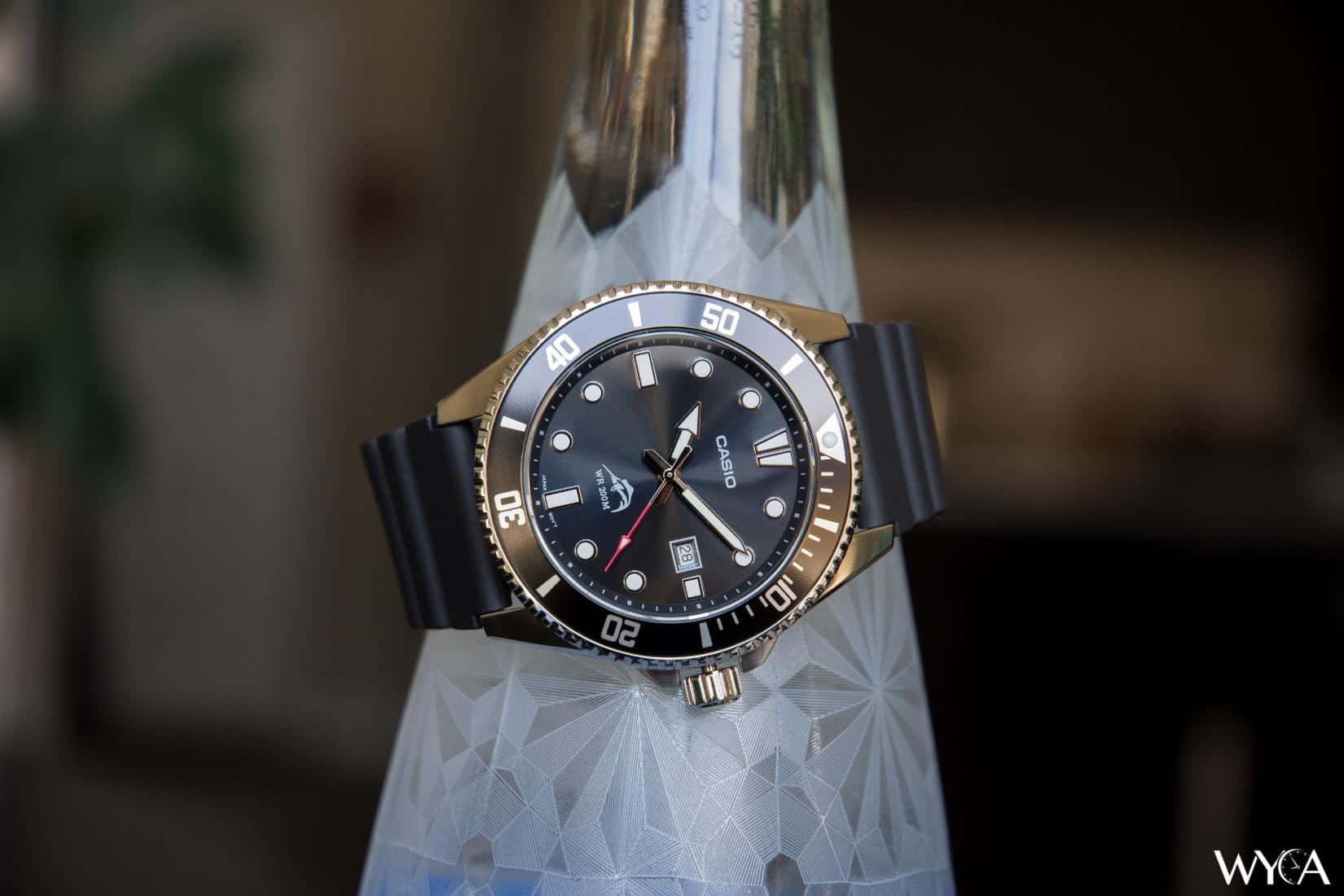 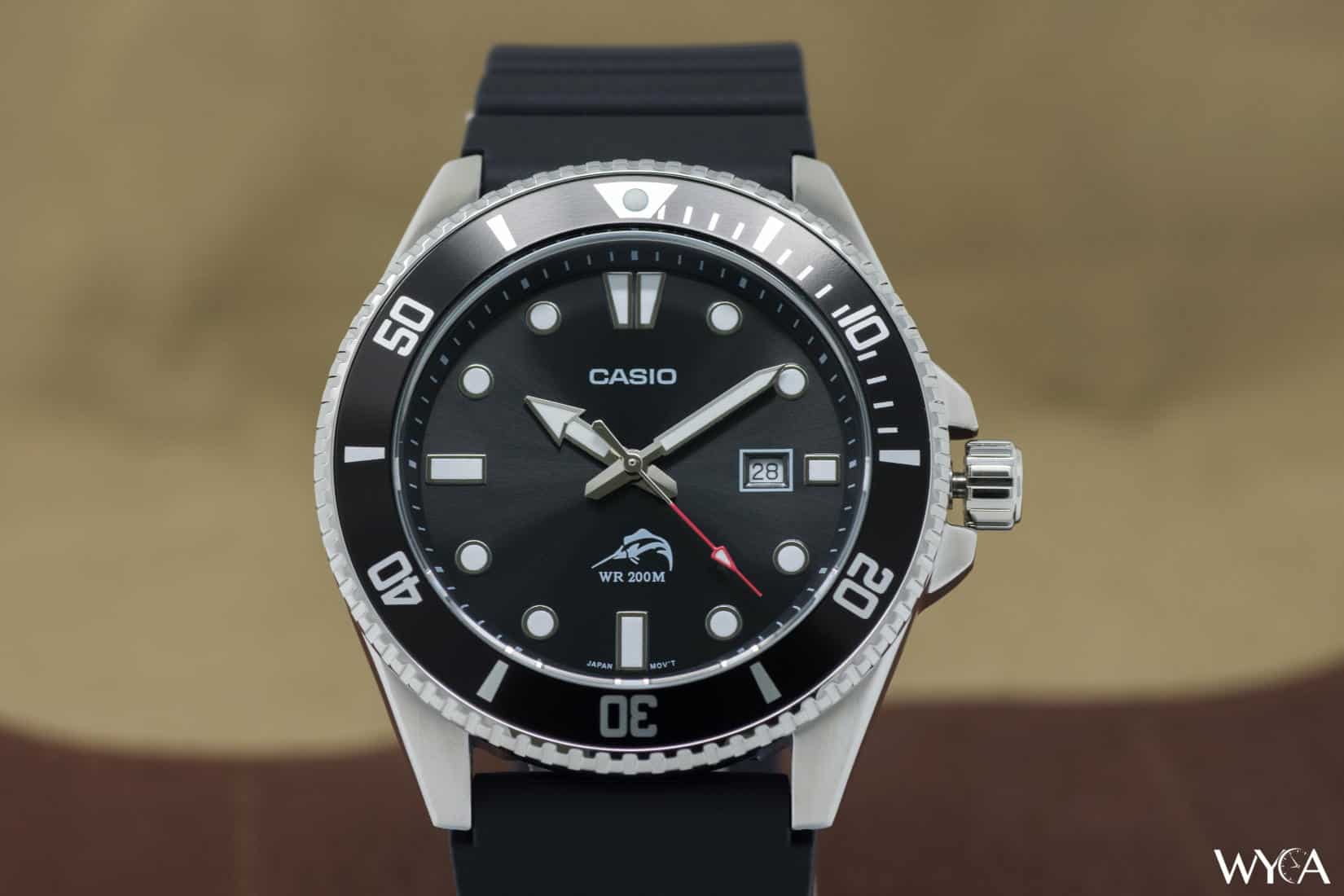 Established in 1946, Casio was one of the first manufacturers to spearhead the quartz revolution. In 1974 they released the Casiotron, the first of many that they would release that would redefine segments of the watch market.

Over the years they have released numerous monumental watches, including the F-91W, the G-Shock lineup, and the databank series of calculator watches. Learn more about Casio and their history here.

Note: the watches listed above have not been reviewed; the above listings are not “recommendations” based on hands-on experience.

Other watches in a similar price range offering 200m of water resistance: 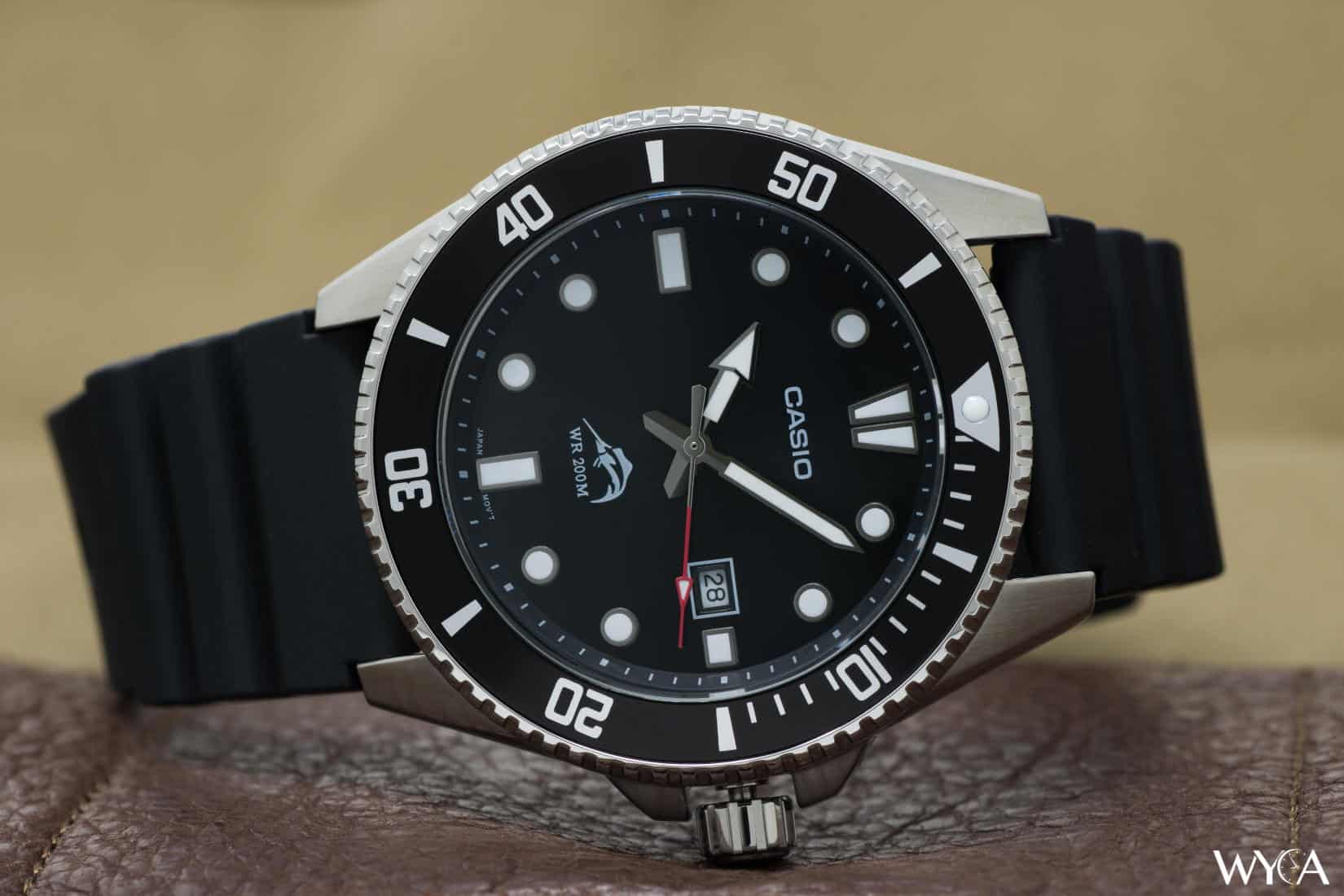 The Enamel Dial is Quite the Looker

The first impression I had of this Casio diver was very positive indeed. The enamel dial – which I tried to showcase in some of the photos – is a real visual win. It refracts light in an eye-pleasing way, and it’s not at all overbearing. It adds a bit of a diffused sunburst effect to the dial, and I’m a big fan of that.

Of particular note is the lume, which I have found to be quite excellent. It also seems to charge quite quickly: even an hour or two in the sun is enough to give the lume meaningful charge and duration.

All hour markers and all three hands are given ample lume, as-is the dot on the uni-directional rotating bezel. Other reviews have noted the lack of lume on other areas of the bezel, which may be a consideration of yours if you’re looking for a fully-loaded diver. 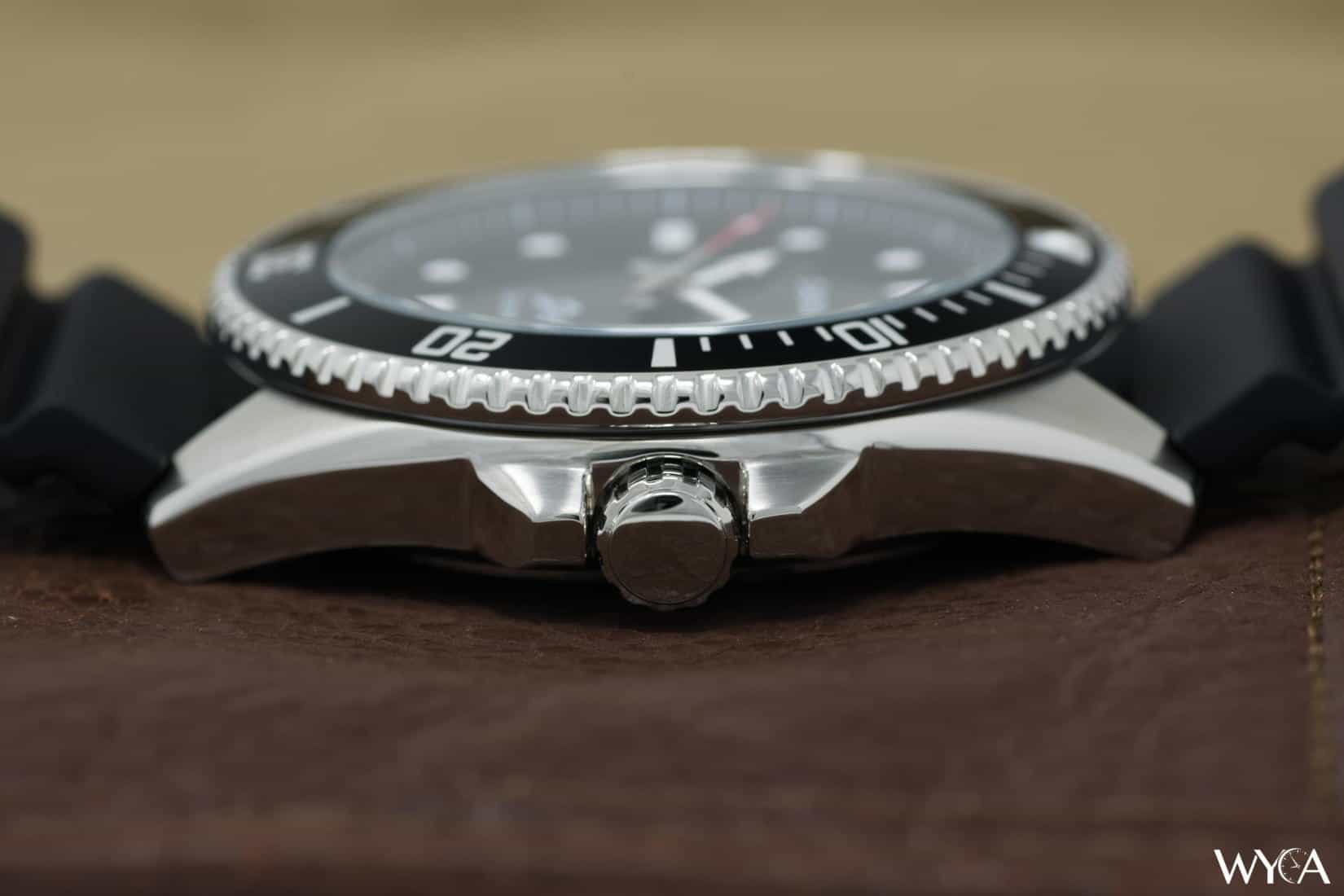 The MDV106-1AV Has Some Dive Chops

The 200m dive rating is somewhat misleading (at least, to the novice watch enthusiast). There are several types of water resistance/dive ratings, and their naming is also confusing. A watch labelled with 50m of water resistance is suitable to wear while swimming or fishing, but it is not capable of diving 50m below the water. Make sense? Yea, it doesn’t to me either.

In this case, the MDV106-1A is rated for 200m of water resistance and is equipped with a screw-down crown. That means that you can absolutely wear it swimming, in the pool, in the hot tub, and even during relatively shallow dives… but don’t take it down deep. It’s not rated for that.

That said, it has fared well in several aquatic environments: a swimming pool (I dove down 5-8 meters and it held up fine), a hot tub (nemesis of any watch), and long-term submersion in a running ultrasonic cleaner (which taught me my first painful lesson about water resistance when I subjected my Jazzmaster Day/Date to an ultrasonic clean… and subsequent service).

While researching for this review, I noticed a distinct lack of quality dive watches available for under $75 that offer 200m or more of water resistance. This Casio was one of the only few options from a brand with a name I recognized. It really is the segment leader. 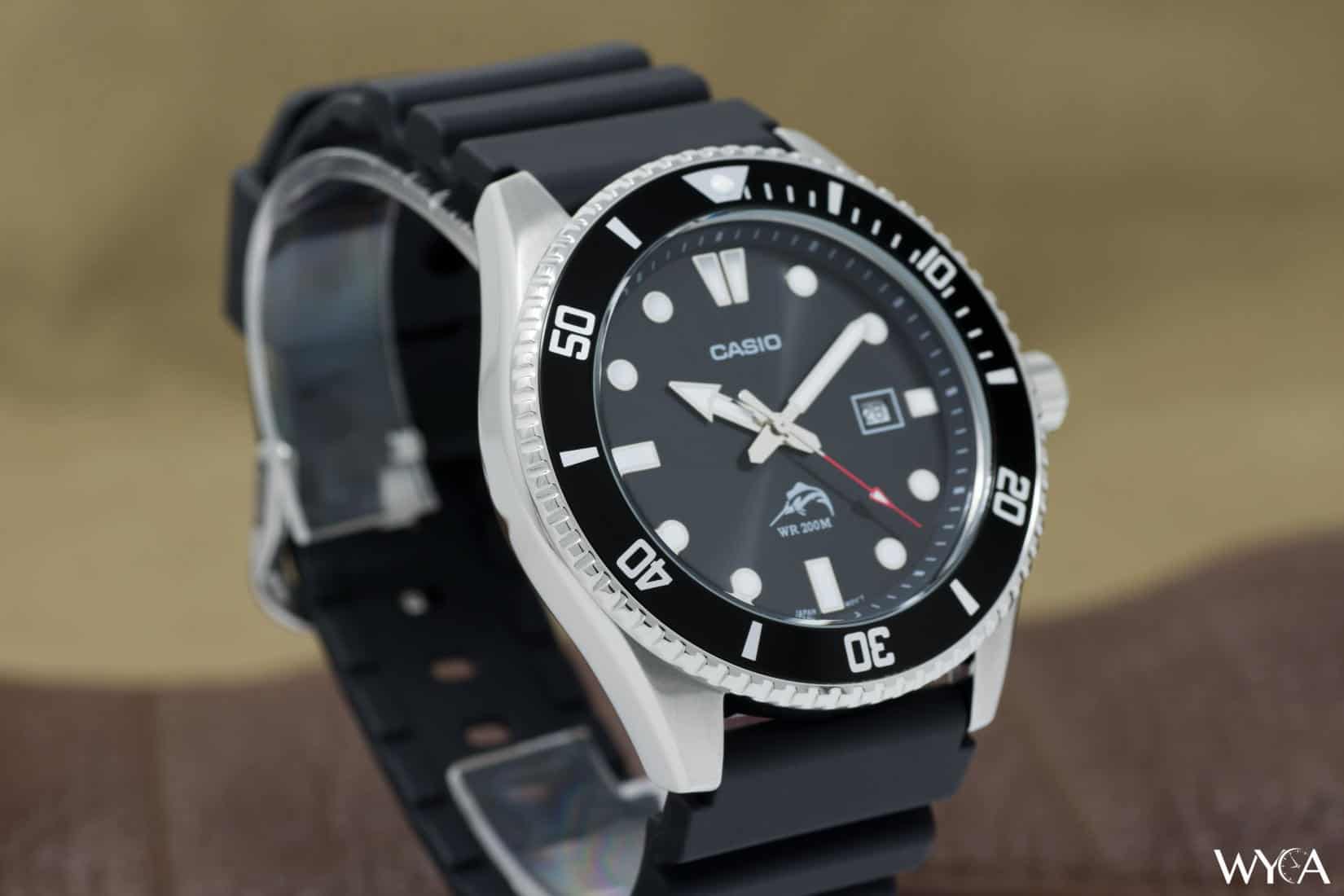 How Does the MDV106-1AV Compare to Other Divers I’ve Reviewed?

None of the watches listed above compete in the lower-end of the affordability spectrum, and both the Scuba Master and Seastar are serious dive watches.

The Mako is an excellent watch (as noted in my review), but the only reason to get it over the Casio (aside from the awesome Pepsi styling) is the automatic movement. If that doesn’t matter to you, the MDV106-1A is an equally as good a choice… and one fifth the price.

Among the divers I’ve tested, this Casio stands alone in its price relative to its performance. It’s probably the best value out there in terms of simple, no-nonsense divers, and it’s still widely available to purchase. 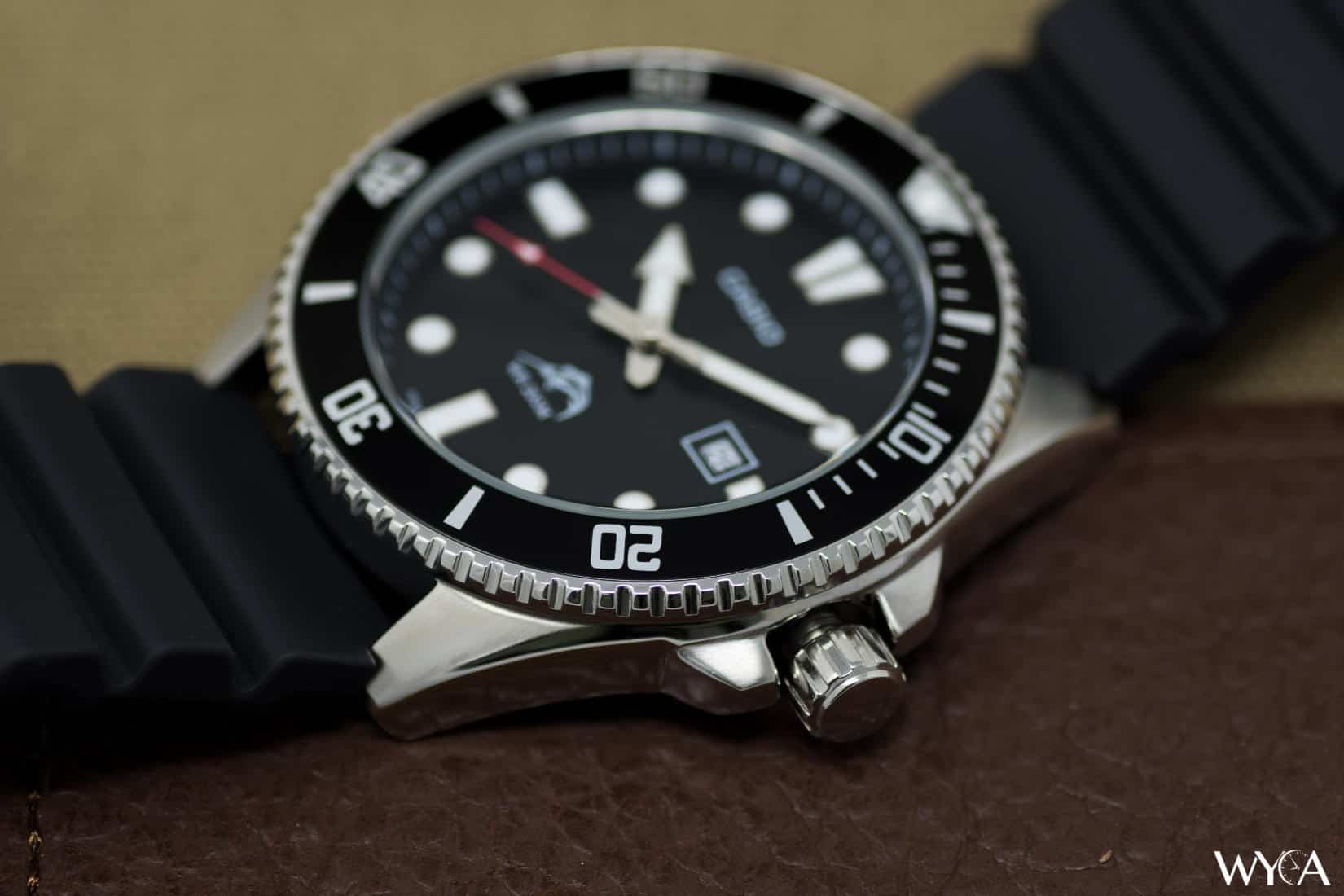 Casio’s Built the MDV106-1AV Quite Well

The bezel rotates each position with a tactile click, and once you’ve got it where you want it, it remains securely in place. Some bezels feel wobbly; this one is quite solid.

I also quite like how smooth the screw-down crown is to operate. On numerous watches I’ve tested with screw-downs, the motion is clunky and sometimes sticky. Most I’ve tested have a tendency to misthread during closing, requiring you to open it up and go for it again. I did not encounter this issue with this Casio.

It’s not just the case that impresses on this Casio; also impressive is the quality of the build on the dial.

The hour markers are applied with no faults visible, and the lume is evenly applied on each. I don’t see any workmanship or machining problems, even under significant magnification. If this watch is made poorly, they’ve done an excellent job obfuscating that fact.

This affordable diver fits right in on the wrist. It’s a dominating presence – 44mm, and dive styling will do that – but also a welcome one. It genuinely looks good, and moreover, feels very much the same level of quality as it looks. It doesn’t look or feel like an inexpensive watch.

The one major caveat here is, of course, the mineral crystal. Mineral just lacks the robustness needed to stand the test of time. In other words, you can expect to have to replace the mineral crystal at some point in the future. When that will be depends entirely on when you wear the watch and how you care for it. Baby it, and the mineral crystal may well last forever. But who buys a dive watch to baby it?

Surprisingly, it’s not an obnoxious watch to wear.

I think this is due mostly to how simple Casio kept the styling, and the fact that the MDV106-1AV doesn’t tower off of your wrist. As shown in the photos here, it’s tall but perhaps not as tall as you’d expect a 200m-rated diver to be… 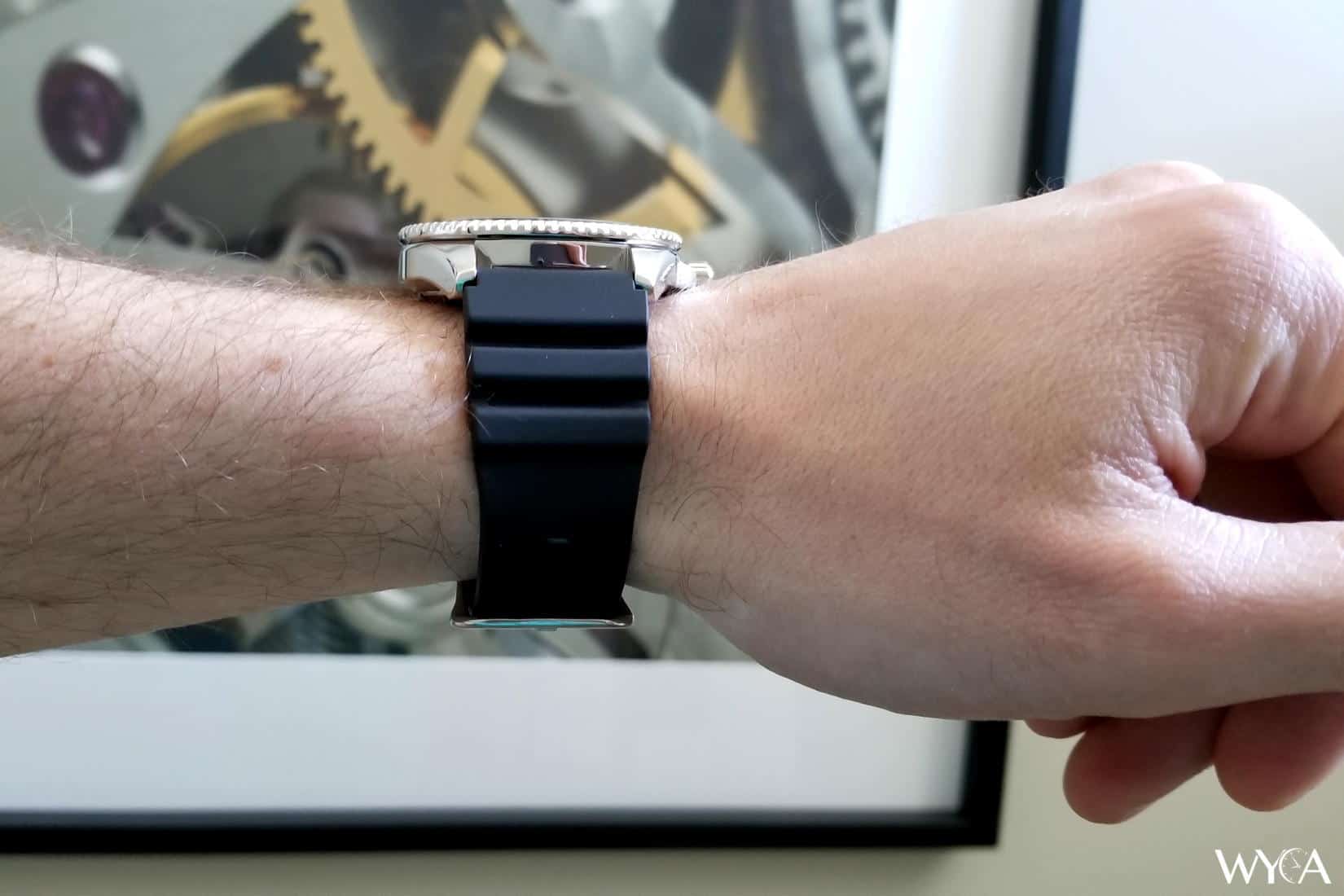 What Casio has shown here in this affordable diver is that you don’t need to break a $50 bill if you’re wanting a capable and decent quality diver. Sure, you can’t take it super deep down, but for 99% of people looking for something to accompany them in the ocean or during shallow dives, the MDV106-1AV is a perfectly suitable companion.

Disclaimer: I purchased this watch for the purposes of this review thanks to people like you that purchase their watches on Amazon via our affiliate links. Your support allows us to remain unbiased and high-quality, thank you!