Skip to content
Home » Casio Watches: The Affordable Brand You Should Pay More Attention To

Casio watches have a colorful history in the technology space. A Japanese electronic powerhouse, Casio makes their presence known in our daily lives through calculators, musical instruments, and most popularly, wrist watches. 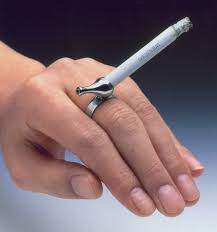 Established in 1946 by Tadio Kashio, he first enhanced life by creating a yubiwa pipe (right), which is a ring that would hold a cigarette while keeping your hands free. 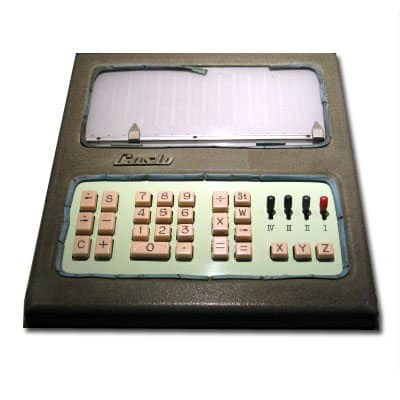 The profits from the yubiwa pipe were then invested to develop calculator devices and differentiated from the competition by creating a calculator using solenoids. Early calculators were powered using gears and in 1954, Japan saw the first electro-mechanical calculator.

It’s Time to Make an Impact

At the heart of Tokyo’s fashion region, they are at the forefront of changing the digital watch landscape, as highlighted by my article on one of their top lines: the G-Shock.

Casio was the earliest manufacture of quartz watches, which we know provides accuracy and dependability that early, mechanical counterparts cannot replicate or duplicate.

Their impact on the wristwatch market started in 1974, with the release of CASIOTRON (right), which featured hours, minutes, seconds, and “a unique function that could automatically determine the number of days in a month” . 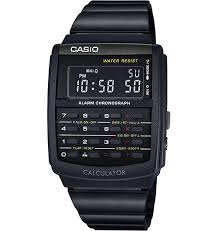 That last part may sound mundane to you now, but this was a game changer in the 70’s.

In the early 80’s, The G-Shock watch was born and the Casio Databank Telememo 10 CD-40 (left), which is a wristwatch that also acts as your pocket Rolodex, meant to store telephone numbers. This eliminated the need to bring a physical organizer, that were quite cumbersome especially when you need to bring a pen or a pencil with you.

The innovations brought by Casio are cornerstones of what makes our smartphones a necessity in life: it’s our timekeeper, calendar, personal organizer, and many more. Modern technology would be very different if companies like Casio didn’t take the chance and create innovative products like the CASIOTRON or the CD-40. 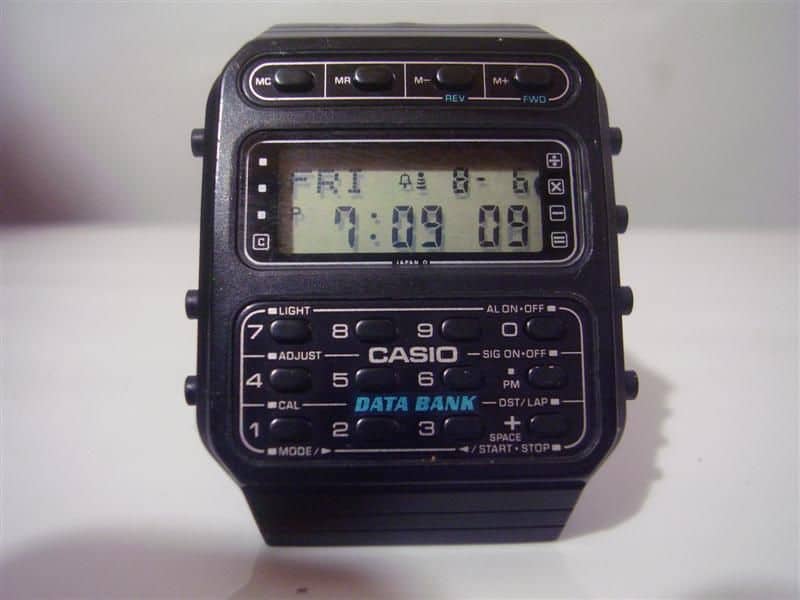 To celebrate the technological marvel and the human ingenuity, here are six watches that embraces Casio’s focus on technological advancement: 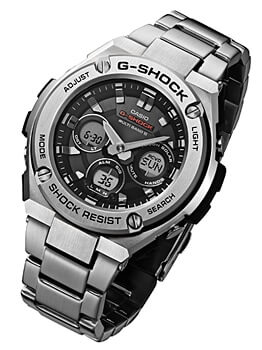 As part of the G-Steel lineup of G-Shock watches, the GSTS310D-1A provides you the versatility and durability of a G-Shock that we all know very well, but in a more formal package. Utilizing a stainless steel bezel and case, you still get the basic offerings of a G-SHOCK such as 200M water resistance, shock resistance, LED illumination, world timer, stopwatch, etc.

I picked this watch because G-Shock watches are great for the features they offer but they’re primarily packaged in silicon casing, which is limited to how and where you can wear it. With the G-Steel lineup, you can get the best of both worlds: having a functional multi-purpose tool in a fancy package that you can wear to a fancy dinner after a lengthy session rock climbing. 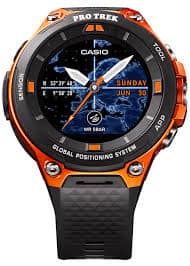 If you are the tech geek that requires constant connectivity in your active lifestyle, The PRO TREK WSD-F20 smartwatch. Focused on outdoor enthusiasts, the WSD-F20 has Casio’s Triple Sensor Version 3 Technology, which features:

Connected to your smartphone via Bluetooth via your Android or iPhone, you can take full advantage of the GPS compatibility, sync color maps for visibility, enjoy the various apps available which includes the sensor readings listed earlier, plus tide graphs, etc. and browse through various functions via the touchscreen. It has 50 meters water resistance.

It’s a great multi-purpose tool to have in your repertoire if you are the modern mountaineer that embraces technology and advancement. 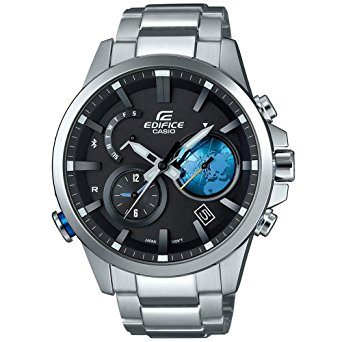 Part of the Edifice line, the EQB600D-1A2 is modern, dressy watch that keeps you connected

Not as feature-rich as the WSD-F20, the Edifice watch has their own tricks such as syncing with the CASIO WATCH+ app on your smartphone to set alarm times, ping your phone if it’s lost, world timer, and the app will have access to server data which will provide the end-user accuracy anytime, anywhere. It’s also solar powered, which will help keep it running no matter where you are. It has a full calendar, dual timezone, power saver functionality, and 100M water resistance.

The biggest party trick that attracted me to this watch is the 3D globe dial located at 3’clock of the watch face. Representing “the flow of time in concert with the movement of the earth”, it adds a subtle touch of individuality in an already great timepiece. 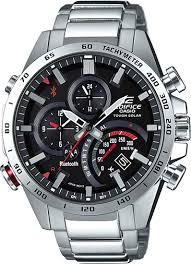 Similar to the EQB600D-1A2 we read earlier, the EQB501XD-1A is part of the Edifice line and offers the same functionality but now there’s a chronograph function added as well. It’s also more accurate as it connects to a time server four times a day to provide accurate time for the dual-timezone display.

This is a personal favorite of mine as I’ve always had an attraction to chronographs, and the red accents speak more to me. It reminds me of speedometers in a race car and has a very sporty look, while still being sophisticated. 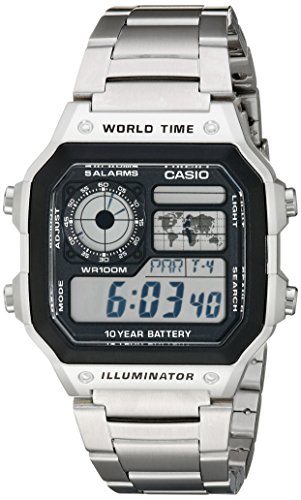 A classic Casio watch design, the AE1200WHD-1A has the James Bond vibe, with the world map highlighted on the watch face. It has great functionality you expect from Casio, such as:

Housed in a plastic case with a stainless steel caseback and bracelet, it’s great for swimming or when trying to enjoying life with Octopussy.

It’s very different from the other Casio watches available today, and it just sings to me.

If you really want to embrace your inner geek, get yourself a staple in the Casio watch lineup: The Casio calculator wristwatch. There are variations of this particular watch, but the CA506B-1AVT, has a modern twist on what is a very historical timepiece.

With an 8-digit calculator and a stopwatch, it sports an adjustable metal band which will provide you the time you need while you try and figure out who pays a $125 meal between 4 friends, with one friend who wants to only tip based what he ate, even though he ate some of your linguine.

It has a clean design, reminiscent of the G-Shock lineup, and will make you a hit in your Intro to Calculus class in university. Let me derive your curves, indeed.

Passionate about cars, watches, and everything technology, Don likes to learn about the intricacies of each hobby and absorb as much trivial information as he can. He can't do the second derivative of 2x+2 easily, but can easily explain to you how to double-clutch a manual car. He denies being a hipster, but his collection of vintage watches and owning a classic Mini says otherwise. He's one plaid shirt away from going full hipster, and he's just on the cusp of normality. He once bought a Volvo wagon on a whim and regretted everything.