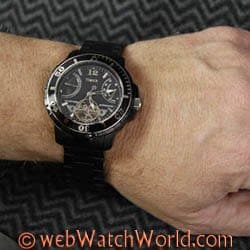 Summary:  It’s a Timex and it’s not quartz!  Relatively expensive for a Timex with an automatic Seagull movement.  Slightly top-heavy, cheap-feeling bracelet and hard-to-read dial make it an iffy purchase.  Are there better deals to be had?  Read on… 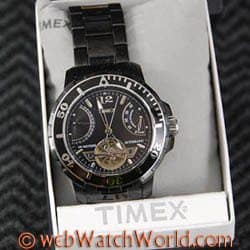 From what I can tell, Timex doesn’t get much respect. I will admit that I have always been a big fan of Timex watches, so I’m hoping that my fellow watch collectors will indulge me.

Timex watches are cheap and unassuming (but with a style of their own) and if they get damaged, lost or destroyed…well, at the price they get for one, your best bet is to just go buy another.

I have a couple of Timex Expeditions that are great little everyday watches and keep very accurate time and I always take one when I travel, just in case. And I especially like the Indiglo night lighting, which is very useful to me when I’m in a strange hotel room or when I leave for work at 5:20 am.

Now as far as I’m concerned, any watch is a good watch. I’m not a watch snob and I like ’em all, no matter the brand, even though there are a few I’d never buy for reasons of style, cost, etc. So whether it’s a Timex, a Vostok, Alpha, Omega or anything in between, I’m always interested in seeing, talking about, wearing and thinking about wristwatches!

I was browsing through the Timex website just before Christmas of 2008 when I discovered that Timex now makes an automatic line of watches.  The automatics are much more expensive than the $40.00 or so I’m used to spending on a Timex, but with 20% off AND a 20% rebate for the factory holiday sale they were running at the time, plus free shipping, I figured “what the heck” and bought this one, a black version of the Sport Luxury Automatic, model #T2M5166K .

This watch also comes in white face versions, with a bracelet or leather band and also in women’s versions and a couple of other automatics with fewer complications for less money.

This one is claimed to have 38 jewels (!), a stainless steel bracelet (anodized or something in black on this one) and 100 meter water resistance.

The list price on this Sport Luxury Automatic is $225.00, which made it the most expensive Timex available at the time.  See, there is snob appeal here also! With the discounts, I paid $144.00.

When I got the watch, which has a 1 year warranty, I discovered a paragraph buried in the owner’s manual that said owners can get an additional 4 years of warranty for $5.00 (yes, five bucks). Can’t do it online though — you have to call the number. Did it and got it.

So $144.00 is still probably a lot of money for this watch, and some would correctly argue that I could get more watch with a Seiko or Orient or Vostok or similar, but I did it mostly out of curiosity. 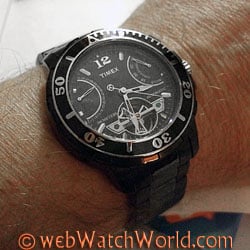 The watch arrived in 3 days and the first thing I can say is that this is one big dude. I used a set of Mitutoyo dial calipers to measure it: 43.3 mm across, not counting the stem.

It wears “big” or top heavy and it feels like a tuna can on my wrist! The bottom of the movement cover sticks out 3.5 mm below the case, and if it wasn’t for that, it would probably feel better. But that’s a lot of weight hanging out front.

My wrist usually takes a 7.25″ band to allow a bit of room for comfort. After taking out 4 links, the Timex fits. But it does not have micro adjustments on the clasp, a disappointment. I could use another 1/2 link out, but there’s no way to do that as far as I can tell. 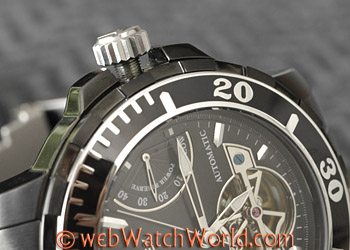 The Traser Super Sport I also bought recently has those micro adjustment holes on the clasp, and I was able to get it to fit so perfectly that I don’t even know the watch is on — I went to bed with it the other night, not even realizing it! The stainless steel metal link bracelet on the Timex Sport Luxury Auto is ok, but feels slightly wimpy. It’s only 20 mm wide and I think it could be at least 5 mm wider to maybe spread the weight out.

The clasp is also acceptable but it’s not super robust. It snaps shut and has a spring-loaded button to open it. It feels like it should last, although I don’t know about the black coating, I’m figuring that will wear off someday.

I think the bezel is made from plastic, although Timex says it’s “Enamel”, which I assume means the paint. It turns only counterclockwise with a nice snap on each detent.

The back of the watch has a clear cover and you can see the movement in the photos. This is the first exposed-movement watch I’ve owned, and although it looks cool, there’s not really that much to see and, of course, you don’t see it when it’s on your wrist.

Setting the Time and Date 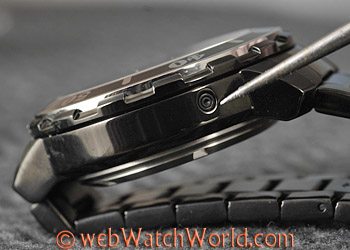 The Timex Sport Luxury Auto has a screw-in, 2 position stem and it “hacks”; that is, unscrew the stem to position 1 to wind the watch, pull it out to position 2 to stop the movement and set the watch.

It also has a unique and, I think, very useful method to set the date (photo above). There is a small flush button on the left side that is pushed with the tip of a pen or similar and each click moves the date hand one day.

When it gets to 31, push again and it swings back across to 1. Very nice, feels solid and very easy to use — no messing around with the stem to set the date…but presumably, this doesn’t help the water resistance integrity.

The numbers and dials on the face aren’t that easy to see — I guess it’s easy enough to see what time it is, but the chrome plating all around creates a lot of reflections and picks up colors and ambient light. The complications include a 31 day calendar on the left and a “power reserve” readout on the right. It’s fun to watch the power reserve meter rise up like filling a gas tank as I wind or rotate the watch.

There’s also a very cool “open heart” at 6 o’clock that shows the innards quite nicely and it’s fun to see what’s going on in there. Not sure if you can see it in the photos, but the screws on either side are blued and there’s a red jewel in there too. But the complications cover a lot of real estate. Only the number “12” is visible, with chrome marks for 11 and 1 and 4 and 8, with smaller marks for 5 and 7.

Lume? Fuhgeddaboudit. A little bit of paint on the tips of the hands but it’s barely visible, even after holding it under a light.

When I received the Timex Sport Luxury Automatic, it was running wild at 1+ minutes fast per day. It seems to have settled in a little, now running about 20 seconds per day fast. It seems to vary quite a bit depending upon where the power reserve is and the position of the watch if I’m not wearing it.

It’s most accurate when I am wearing it and power reserve is topped off, then running 15-20 sec/day fast. I’ll keep an eye on this and if I may see how good the Timex warranty service is, although I’ll bet they’ll say it’s within specs.

After wearing it on and off (mostly off) for several months, it runs about +11 seconds per day, which isn’t bad at all. I’ve heard that mechanical watches might need some time to “bed in”, and it must be true. So that’s good news!

I like the watch, and it’s a curiosity, and perhaps there’s some perverse logic in owning the most expensive Timex.

Would I do it again? Probably not. I still like the Timex brand, particularly their Expedition line. But if the Sport Luxury Automatic was easier to read, had better lume, wasn’t so top heavy and had a better bracelet, I’d be happier and probably have a much different opinion.

By the way, in terms of accuracy, I have not had good luck with any of the automatic watches I’ve ever owned, including my Omega Seamaster certified chronometer, purchased brand new from a dealer.

Part of the problem is that once you get used to “atomic” time like in my Casio watches, it’s difficult to swallow something this inaccurate. The Timex Sport Luxury Auto is also pretty heavy and probably too thick for my liking. I probably should have purchased the simpler automatic model, the T2D951AT.

But, live and learn! I’ll keep it for a while and maybe it will grow on me. You have to admit, the Sport Luxury Automatic is a pretty big leap for a company like Timex!