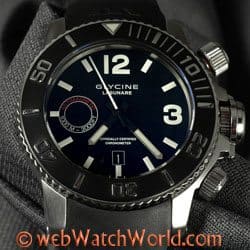 Summary:  The Glycine Lagunare 3000 is one of the largest, thickest divers available that is still usable (barely) out of the water.  Only comfortable on a very big wrist, the watch is easy to read but is lacking minute hash marks; a strange feature for a COSC certified timepiece! 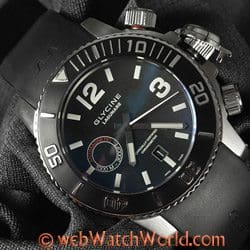 Glycine makes a wide variety of wristwatches, all with a particular style that is paradoxically very different but similar at the same time. Another way of putting this is that a Glycine watch is almost immediately recognizable, yet their watches are all very different. This is quite unlike, for example, Rolex or perhaps Breitling (or Omega, but to a lesser extent), who have a much more limited styling range of watches that all have similar looks.

This, to me, is a remarkable achievement, and one of the things that attracted me to the brand. For example, Glycine makes the KMU 48, which I’ll be reviewing soon, a watch that is quite different from their Combat Sub, the 1914 Bienne, the Eugène Meylan or the Observer. Every one very different yet somehow recognizable as a Glycine.

Although Glycine seems to focus on making watches that are historically reminiscent, the company also makes a few that could be considered dive watches. The Lagunare 1000 and the Lagunare 3000 described here are probably the most focused dive watches made by Glycine, although both would probably not be the first choice of a “real” diver.

The Lagunare 3000 (Lagunare is the Italian word for “lagoon”) was made in a limited production run of 300 in the 2008 time frame. It’s one of the few COSC-certified Glycine watches, or rather one of the few where Glycine has used a COSC-certified movement, in this case, the ubiquitous ETA 2824-2.

Like many watch manufacturers, Glycine may have to look elsewhere to source movements with the apparent end to ETA (owned by the Swatch group) movement sales supposedly pending. It’s unclear what will happen at this point, but the future will be interesting for all of the watch manufacturers currently using ETA movements.

Even though production has ended for the Lagunare 3000 (the “3000”, by the way, indicates the pressure in feet for which the watch is rated), some can still be found for sale at authorized dealers and they occasionally come up for sale in the various watch forums, usually in excellent condition and being sold by owners who, like me, found that such a large watch just isn’t practical for everyday use. 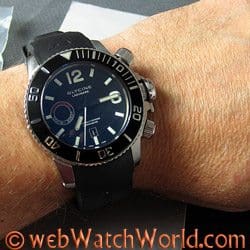 At 46 mm wide by 54 mm across the lug tips and fully 18 mm thick, the Lagunare 3000 is a big watch by anyone’s standards. I have a 7.25″ wrist and can usually fit the bigger watches, but the L3K is just too big for everyday use.

It probably shouldn’t be this way, but the rubber strap that comes with the watch is not one of Glycine’s better efforts. In general, and after owning 13 Glycine watches over the years, I can say that the straps provided with Glycine watches are not up to the quality of the watches. The buckles or clasps especially usually seem of low quality, in my opinion, and like something found on a much cheaper watch.

This is the case on the roughly $3,700 Lagunare 3000, which has a stiff rubber strap with a very wimpy and pedestrian buckle. The strap is also placed rather strangely on the lugs; instead of being angled down, it’s angled outwards, making the watch even harder to wear and leaving a gap around where the strap meets the lugs. Many L3K owners have complained about this strap and usually replace it. 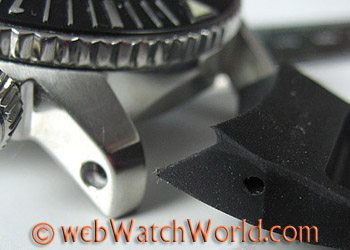 The stiffness of the strap is also problematic; were it more pliable or made from silicone, it could probably be curved more closely around the wearer’s wrist for a better fit. I’d have to wear it very tight to keep the watch, which feels “top heavy”, on my wrist. Strangely enough, the strap is very short, especially considering the large lug tip-to-tip dimensions. Even with my 7.25″ wrist, there would barely be enough excess strap left over to pull through the two keepers. This is very unusual for a diver, which normally has an extra-long strap to allow the watch to be worn over a wetsuit if desired. 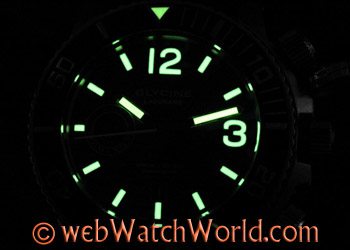 There’s also something important to note when changing the straps on this watch. Glycine uses a special threaded spring bar tube to hold the strap. It is very easy to strip the threads, as I discovered, when unscrewing the screw from the outside of the lugs. It is also nearly impossible to unscrew the screw without bunging up the screw slot. Apparently, the screw is made from a too-soft metal.

If you strip the threads, you will have to order a new set of threaded spring bar tubes from Glycine. These cost me $25.00 and had to be special ordered from Switzerland, which took several weeks. The bottom line here is to use extreme caution and a high-quality ground screwdriver that exactly fits the screw slot, and be very careful! Also, do not use Loctite on the screw threads, or you will surely strip them the next time they are removed. Also, be careful not to tighten the screw too much.

As you can tell, I much prefer the standard spring-loaded spring bar instead…

Regarding the weight of this watch, I forgot to put it on the scale before I sold it recently just as I was writing this review. If anyone can tell me how much the Lagunare 3000 weighs, I would appreciate it. I believe it was over 200 grams though.

The Lagunare 3000 has excellent lume, probably Superluminova. The triangle marker on the bezel is also lumed, although the sweep seconds hand is not.

The main crown is protected by a swing-away cover, which makes it slightly difficult to screw and unscrew the crown and to wind the watch. But I never found this to be much of a problem.

Another curious feature of the Lagunare 3000 is that you will notice it does not have minute hash marks, surely a strange feature on a COSC-certified watch. I’m not sure how it makes sense to use a COSC-certified movement in a watch that is very difficult to set the minutes exactly, but there you have it. This may be why some serious divers consider the L3K as a “desk diver”, despite its size and depth rating.

To set the watch when the minute hand was not at a 5, 10, 15, etc, indicator, I rotated the bezel around to put the triangle indicator on the minute hand, then used the hash marks molded into the bezel to count off the minutes. The bezel is very difficult to turn and must first be loosened by unscrewing the crown at 2:00.

I didn’t find the COSC-certified movement to be all that accurate, to tell the truth, or at least it did not meet my expectations. Indeed, I have found that in general the COSC-certified movements in my experience aren’t as accurate as the basic movements in my other watches. Probably the COSC certification does mean that the movements will be more consistent when the watch is held in various positions, but I’m not sure it’s worth worrying about or paying any extra money to get the certification.

The Lagunare 3000 ran about 6-7 seconds fast per day, but at least it could easily be set by hacking, or pulling out the crown, waiting to catch up to the NIST time each morning as displayed on my Casio Waveceptor that I use to set all my watches.

The big white numbers and large hands make this a very easy-to-read watch. The upside of the missing minute hash marks is the large surface area of black finish, again helping to give excellent contrast to the white numbers.

The original list price of the Lagunare 3000 was $3,695.00, which seems rather exorbitant to me for this watch. It was usually highly discounted. I purchased this one used and they can be found, usually in good condition, on the various watch forums for prices ranging from $1,500 to $2,500, which seems much more reasonable.

The Lagunare 3000 is a unique dive watch that has a lot of presence, but can really only be worn with short-sleeved shirts. It looks good but the reality is that a watch this big is probably too big for the vast majority of owners. Even a person like me, who was an avid Glycine collector, ended up coming to the realization that the watch was more of a novelty than anything else and I ended up selling it.

I don’t really miss it and I have a white-faced Lagunare 1000 that is also very big (almost too big) but is thinner, so it is at least wearable. I’ll be reporting on that one soon, along with a few other Glycine watches.