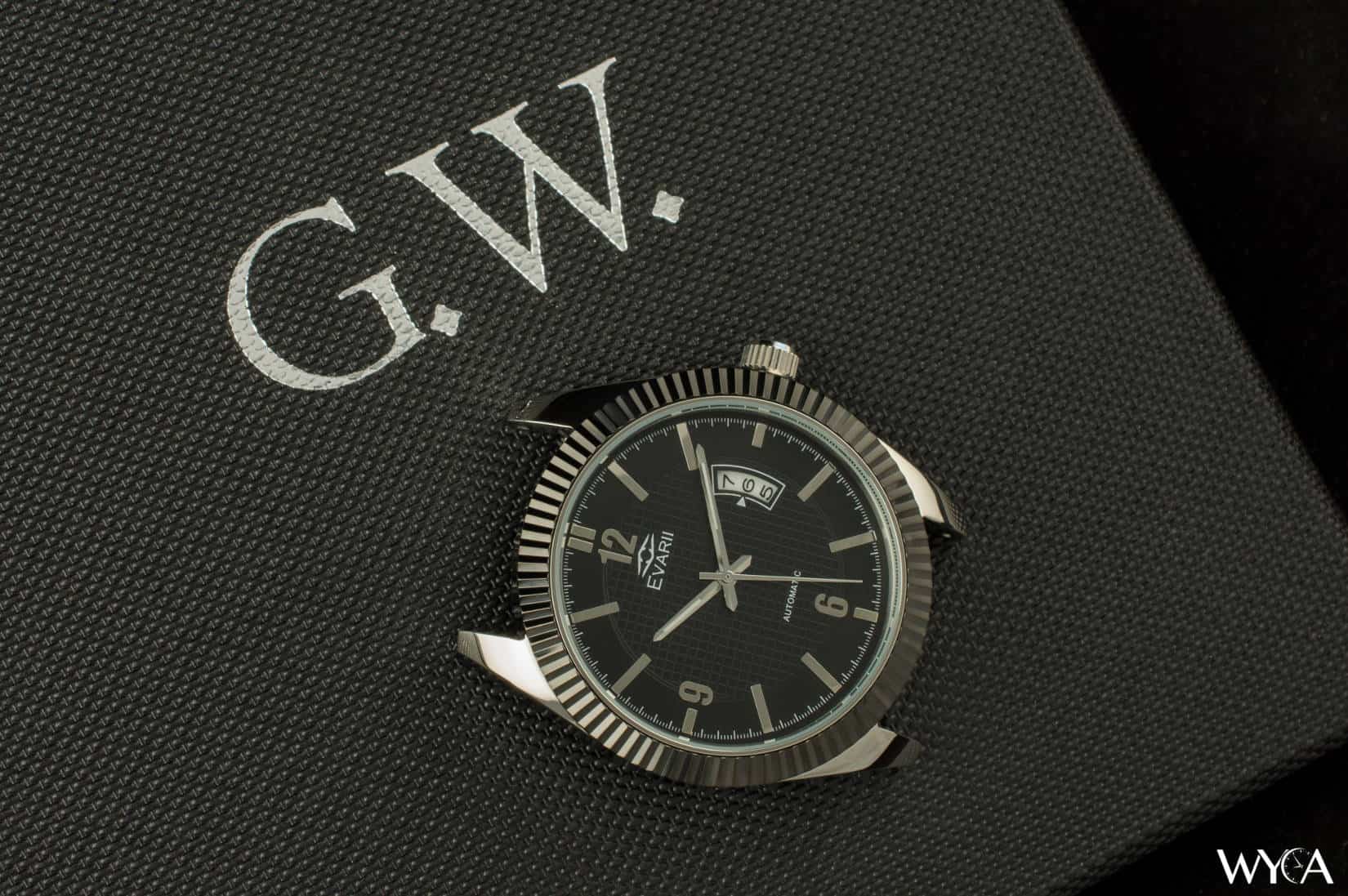 The Evarii Vader: Built, Not Bought

Disclosure: I e-mailed Egard and asked if they’d be interested in sending something my way so I could review it. They thought it was a good idea and sent over the Vader Starter Kit.

Egard is one watchmaker that I’ve been meaning to work with for a while. They hit my radar a few years back when they launched the Passages, which was created by William Shatner and Illan Srulovicz (Egard’s founder). The Passages watch was one of the first “big” watches to hit crowdfunding- their 2014 Indigogo campaign raised over $680,000.

The Evarii brand is a significant departure from watches like the Passages. It’s an entry-level, DIY-experience that offers you the option of mixing and matching. If you like to tinker with things then you’re in luck with Evarii.

On my wrist is the Vader, which is the name of the collection of parts used to build the watch as opposed to that of the watch itself. The dial is named the Dillishaw, and the other components (case, bezel, strap/bracelet) are given no name at all, so Vader it is (rolls off the tongue easier than Dillishaw).

Egard sent us the Vader at no charge, shipping included. It arrived four days after we ordered from the website. 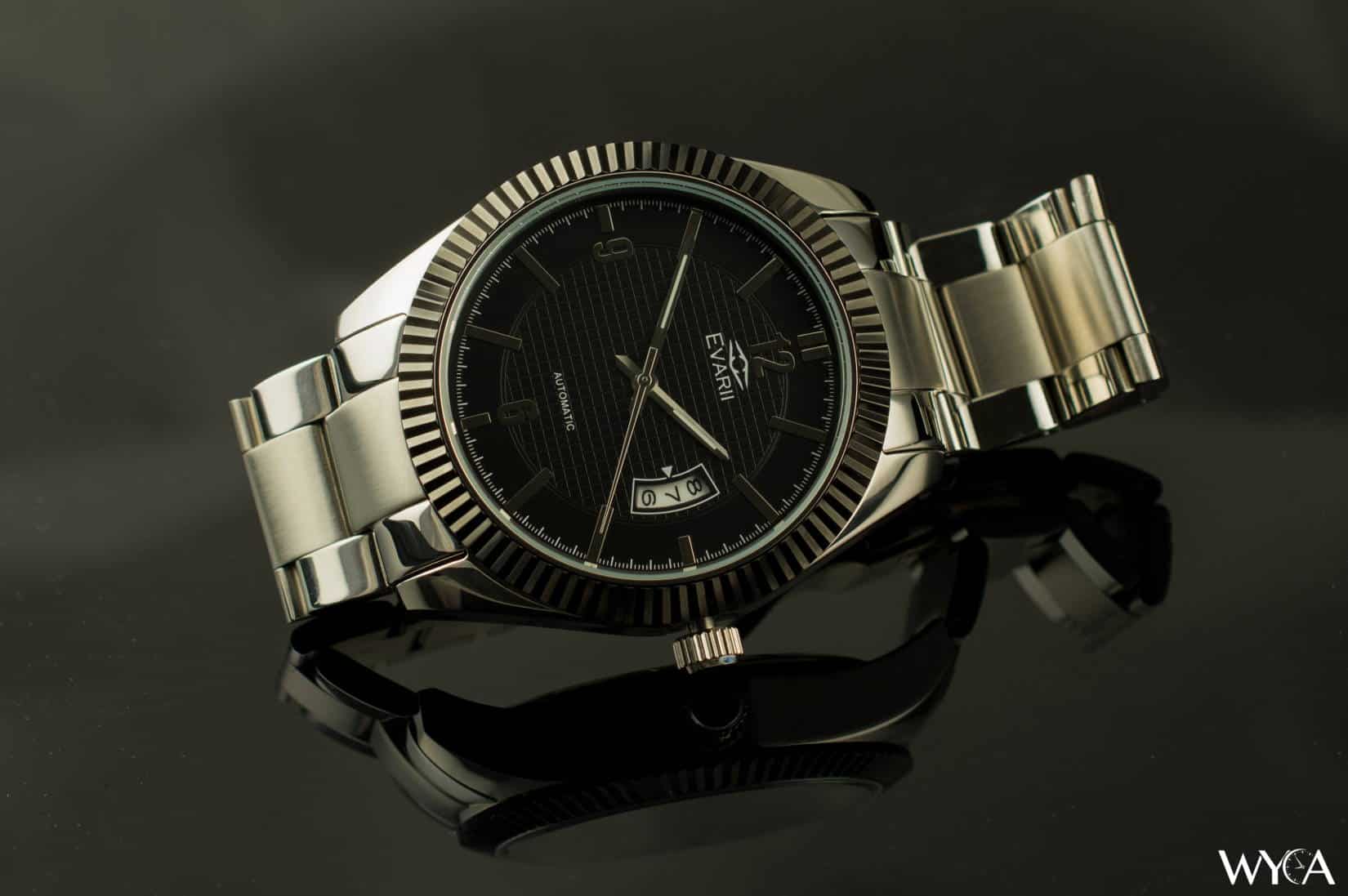 Egard was founded in 2012 and is a father/son business. They have successfully run numerous crowdfunding campaigns, including the Passages, the Rush, and campaigns for their new brand, Gentleman Warfare. Egard operates out of Canada and the United States, with offices in Los Angeles and Toronto.

The most direct comparison I can make to Evarii is Eldon Watches, which makes modular watches very similar to Evarii. I got to check out a prototype model back in 2016, and I remember at the time being pretty impressed with how it was done.

See my hands-on review of the Eldon watch. 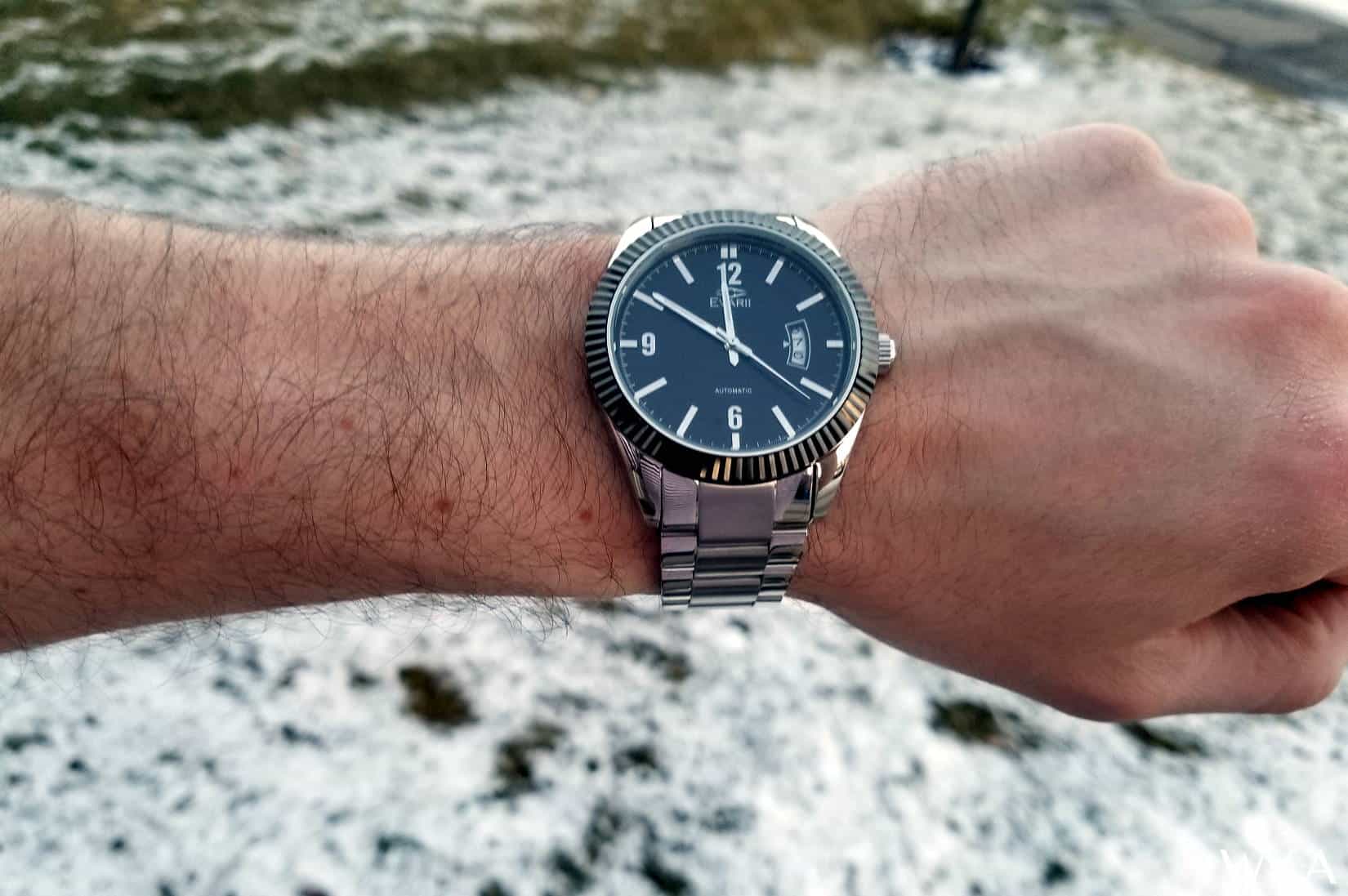 Vader is a Fitting Name for This Black on Steel Automatic

Even if it does seem chosen arbitrarily.

The black on steel color scheme is pretty standard, and I’ve got no complaints aside from the logo crowding the 12 o’clock hour marker. I’m a fan of the black bezel paired with the polished stainless case and two-tone steel bracelet.

This look does make the Vader a bit of a poser, however. 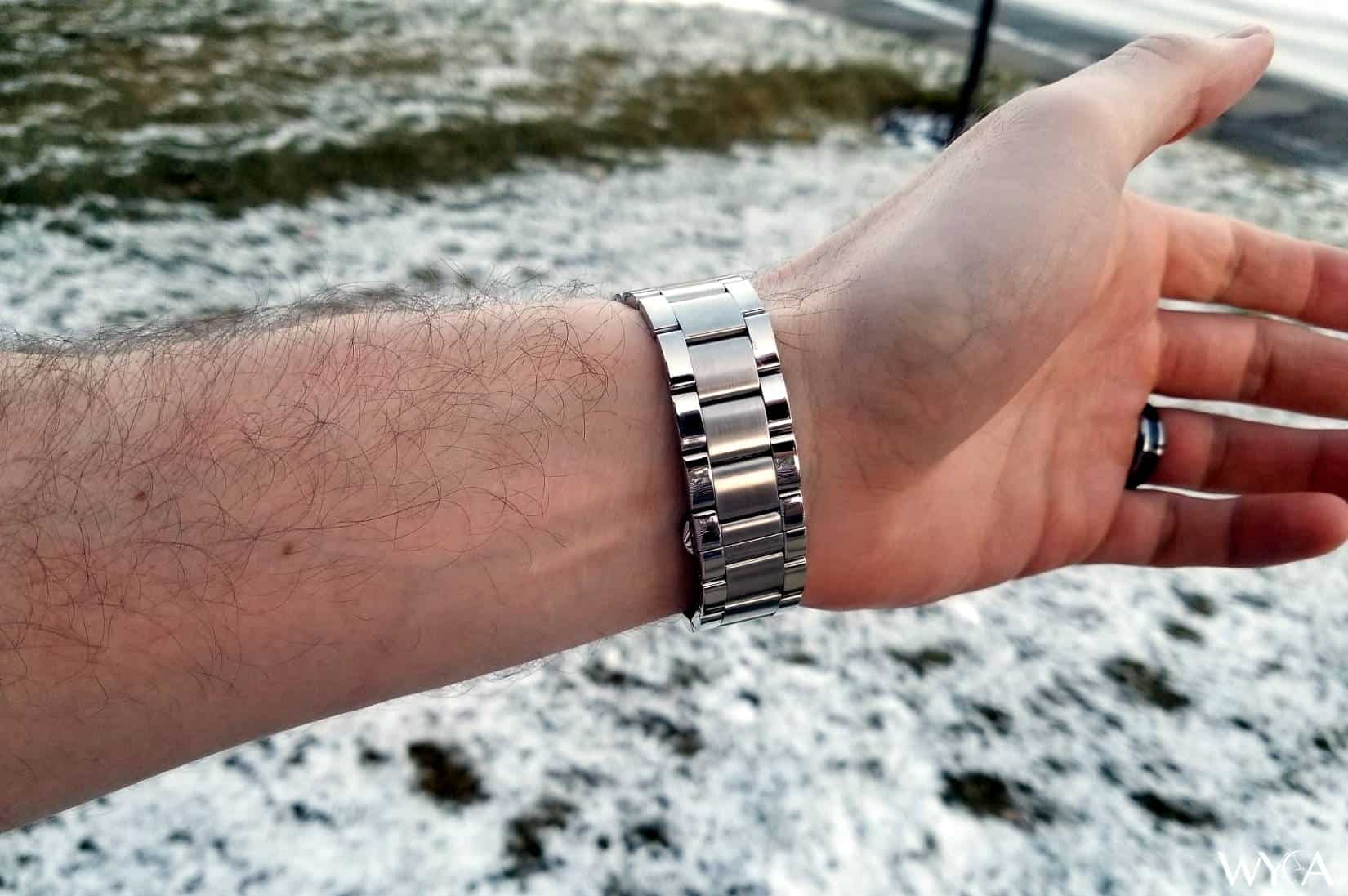 The bezel gives the Vader a strong nod to dive watch styling, but with meager 30m of water resistance, you can’t do much more than wash your hands with it. That’s fair and fine – the Vader certainly isn’t the first watch I’ve reviewed with mediocre water resistance.

I can forgive the posing, though, since I can easily change it if it bothers me (which it doesn’t; I like dive watches). That’s the entire point of the Evarii brand: to give you the option to mix and match to your heart’s content. It only takes a second to swap in a new bezel, and then bam – a different watch entirely. 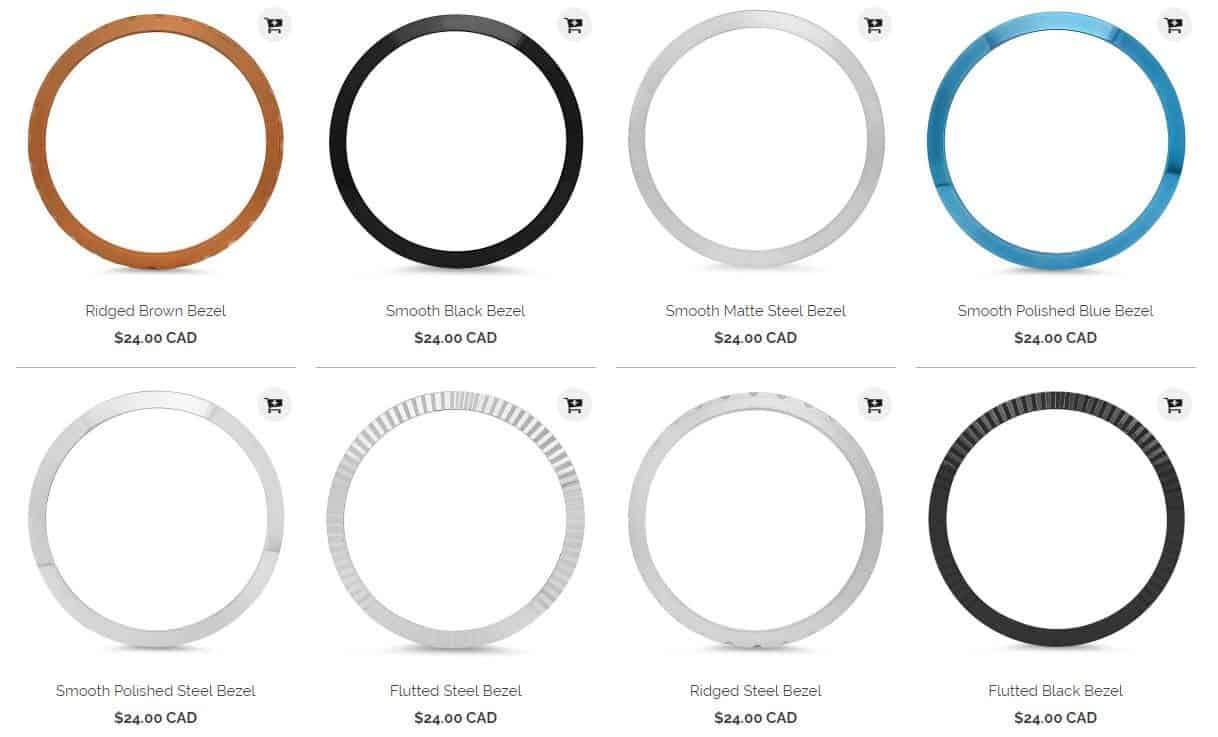 This ease of customization is a big plus if you’re indecisive, or if you simply only want one watch that you can switch up every now and then. It’s also a bit of a weakness: because you’re building it, the watch feels a little homemade.

The bracelet creaks when you move your arm, and the tolerances connecting the bracelet to the case aren’t as tight as you’d see on something that was clearly made for the case it’s paired with. It isn’t glaring; in fact, it’s not even obvious on visual inspection. The watch looks fine. But you notice it when you wear it- it’s a noisy watch. 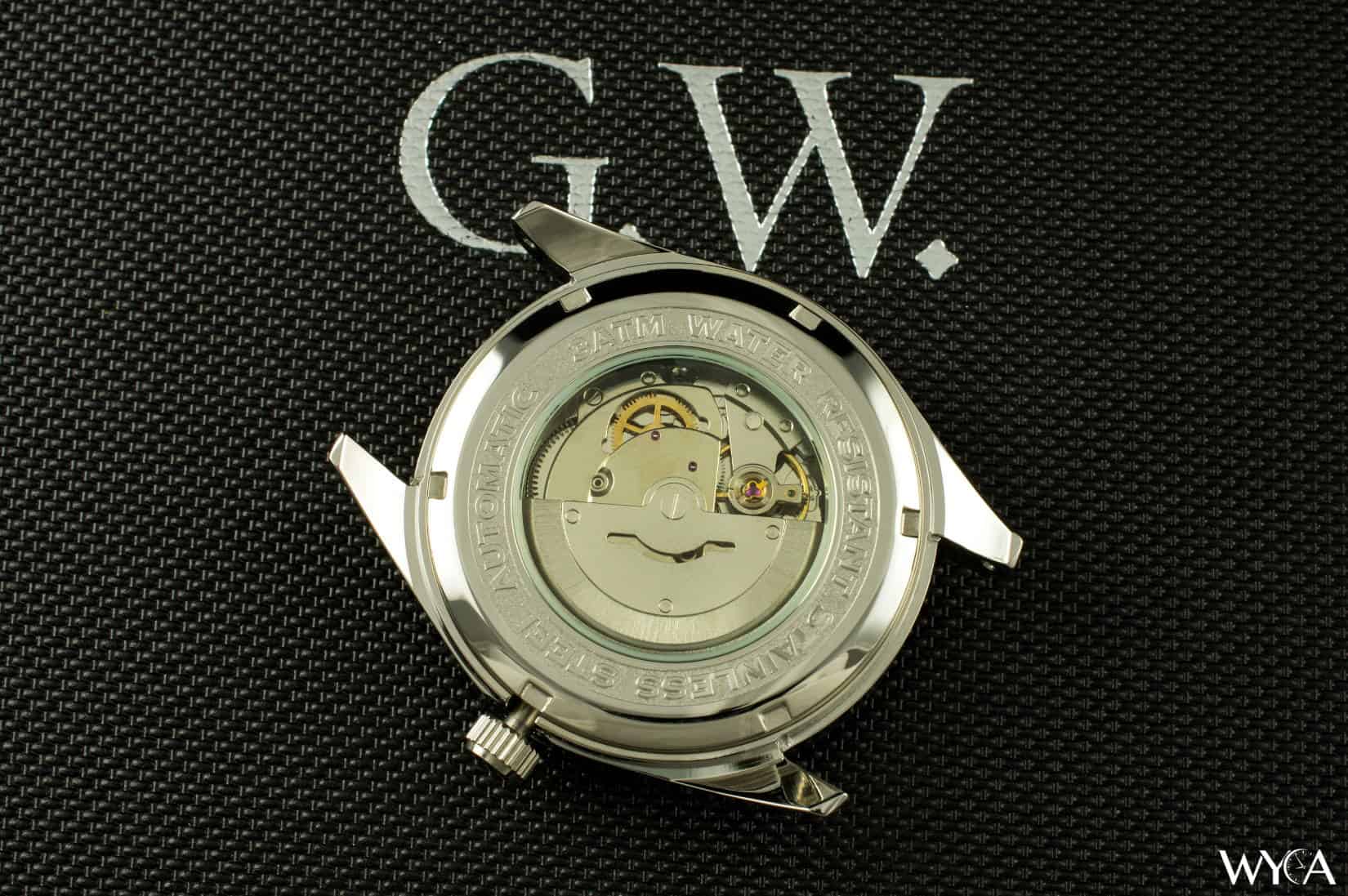 The PTS Movement Contributes to the Noise

Louder than the squeaking and creaking of the bracelet is the PTS Resources ST6 automatic movement. This is the first watch I’ve encountered that uses a PTS Resources movement, but at the same time, it isn’t. PTS Resources has partnered with Hangzhou Watch Company to produce many of their movements (though they do have their own in-house movements as well).

Hangzhou movements are common in microbrands and overseas brands that use more affordable movements. It’s not a particularly well-spec’d movement, but Hangzhou does have a good reputation with respect to reliability, so it’s got that going for it.

In any case, the ST6 mechanical is a loud one- both in operation and in wear. It beats at 21,600bph, has 23 jewels, and it hacks. It ticks quite noticeably – though not quite as bad as a Weekender does – and is quite loud when it winds. Personally, I find this so satisfying– it’s part of what I like about the watch.

I’m not expecting exacting accuracy from a $170 automatic, but I was surprised at just how much the movement is out. Using toolwatch.io I observed a daily deviation of -41 seconds! Wowza.

A Neat Concept for the Right Person

If you’re a “one watch” person that doesn’t mind blurring the definition of what it means to own “one” watch, Evarii is a neat brand that you’ll see value from. A selection of 43mm round and 44mm square cases – in both matte and polished finishes – can be paired with any dial, bezel, and strap/bracelet within the collection. You could have a metal bracelet and a leather strap, with cases and bezels to match.

The movement choice keeps the Dillishaw (dial) affordable without sacrificing much in the way of reliability. The ST6 automatic is one of the least accurate movements I’ve worn, but it’s not exactly disastrous. You’ll need to reset the time every few days. That said, you should also see several years of regular wear without any problems. Like I said, basic but pretty reliable.

When everything is said and done, I don’t have any complaints considering the $170 MSRP. Putting it together and taking it apart is easy – save for the bracelet, which I don’t think I’d swap as often – and it delivers better value than most fashion brands and other options available for the same money.

If you like the idea of building your own watch, I’m sure you’ll appreciate what you get with the Evarii Vader starter kit.