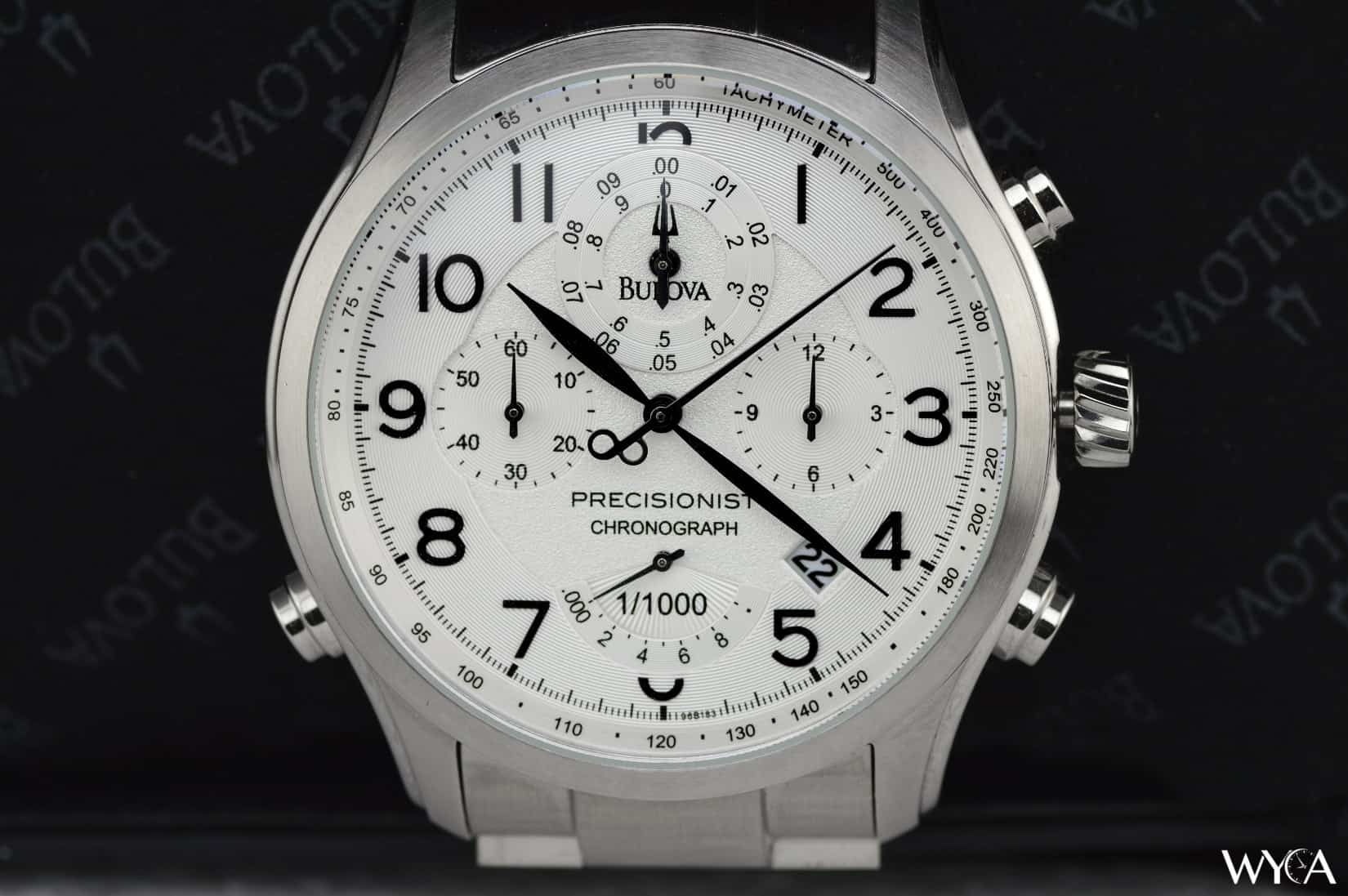 A friend called me up having picked it up for pennies on the dollar. The jeweller selling it assumed it was broken because they couldn’t get the hands to work properly. As it turned out, they simply didn’t know how to operate the Precisionist movement. It’s kind of funny, too, because the Wilton is a real showpiece.

Unfortunately, I haven’t spent as much time as I’d like with this big Bulova on my wrist, so I decided that I wasn’t in a position to do a full-on review as I normally would. Besides, if you want an in-depth hands-on review of the Wilton, you can always read this excellent piece from Ariel Adams at aBlogtoWatch.

Instead, I thought I’d show off some macro photos of this incredibly photogenic Bulova and talk about some of the things about it that I really like. Sometimes I come across a watch that’s just straight-up fun to photograph; the Bulova Wilton Precisionist Chronograph is definitely one of those watches.

This accuracy does come with a couple of drawbacks, however. First, there’s the size. In order to achieve this level of accuracy the movement itself is quite large. This necessitates the use of a 45mm case. Second, there’s the battery life. Even using a larger than normal battery, you’ll still only see around two years out of it. For comparison, most watch batteries last between 3 and 5 years.

The Chronograph Precisionist Movement Inside the Wilton Really Is Something Special

The seconds hand sweeps the dial during regular wear, and when the chronograph is activated, the insane accuracy of the movement really becomes obvious.

Watching the Wilton confidently mark thousandths of a second with the chronograph activated is impressive. So too is the way the seconds hand is re-purposed as needed by the watch’s various functions. 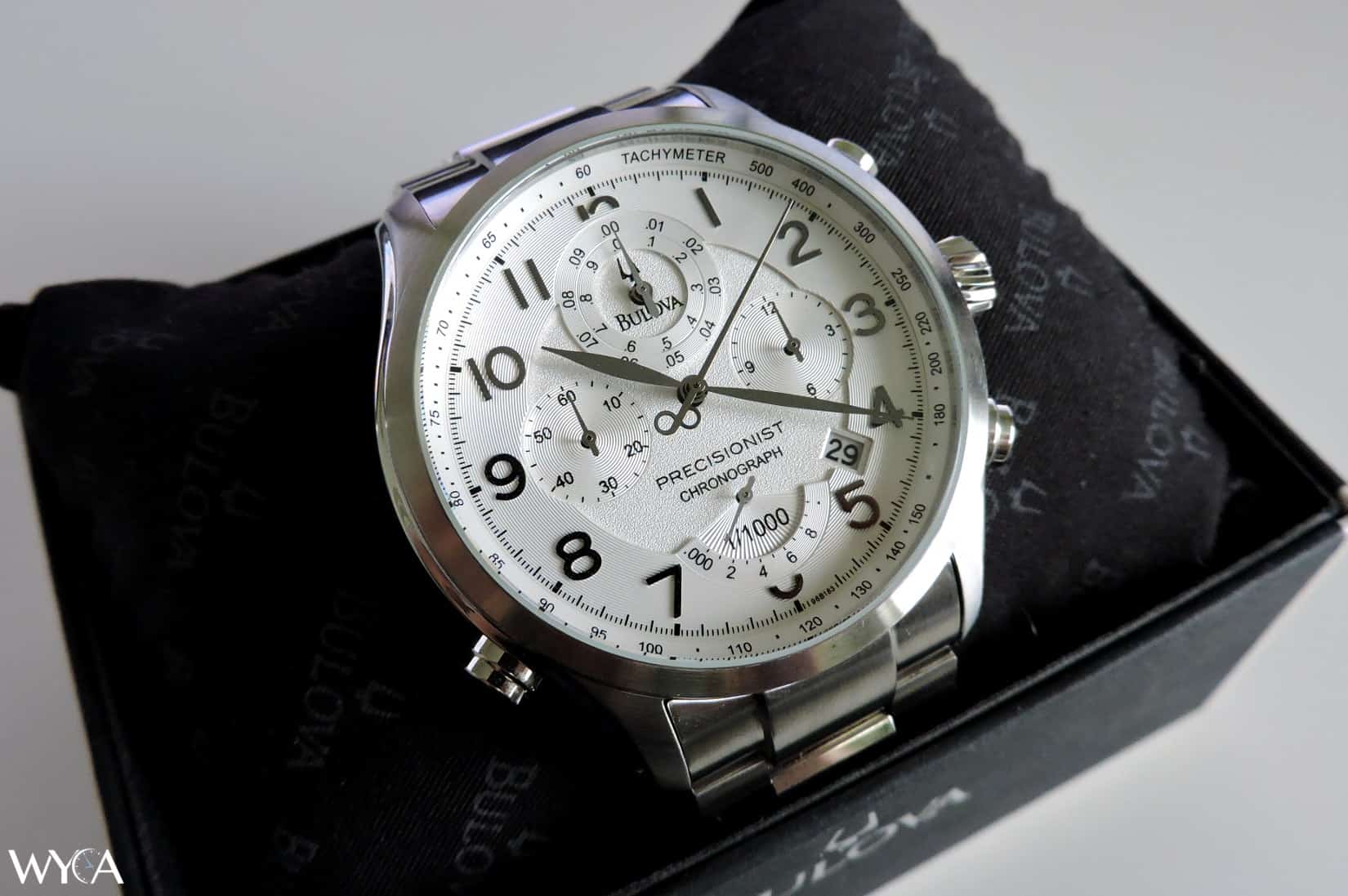 The Build Quality on the Wilton Seems to be Quite Good

The Wilton is built like a tank, and all its components are attached with exacting tolerances. The hands, including the retrograde at 6 o’clock, are properly aligned. From a fit and finish perspective, this watch looks great.

One area I have to shed some criticism on is the choice to use a mineral crystal as opposed to a sapphire one. Recognizing that concessions have to be made to achieve certain price points, I still feel disappointed that such a large and prominent watch would come with a mineral crystal. Seeing as how the rest of the watch is almost armor-plated, and that it’s packing a premium and ultra-accurate quartz movement inside, it feels like a serious miss.

Normally when I have a watch under zoom I’ll find small faults in the build quality. On the Timex Weekender, for example, you can clearly see small, nearly invisible fibers extending from the hour markers. This detail, invisible to the naked eye, becomes quite obvious from behind the lens of my Tamron 90mm.

The Wilton, though? Perfect. And I mean perfect. All the markings on the dial, be it the hour markers themselves or the printed markers on the subdials, are flawless. Their alignment is perfect, their color/quality of application is excellent, and there are no visible flaws that I can see. Even the hands are free of defects.

I am genuinely shocked. I’ve always known Bulova watches to have good build quality. On the Wilton, though, it’s been taken to a whole other level. Suffice to say, I’m impressed to see this level of detail on a sub-$750 watch. 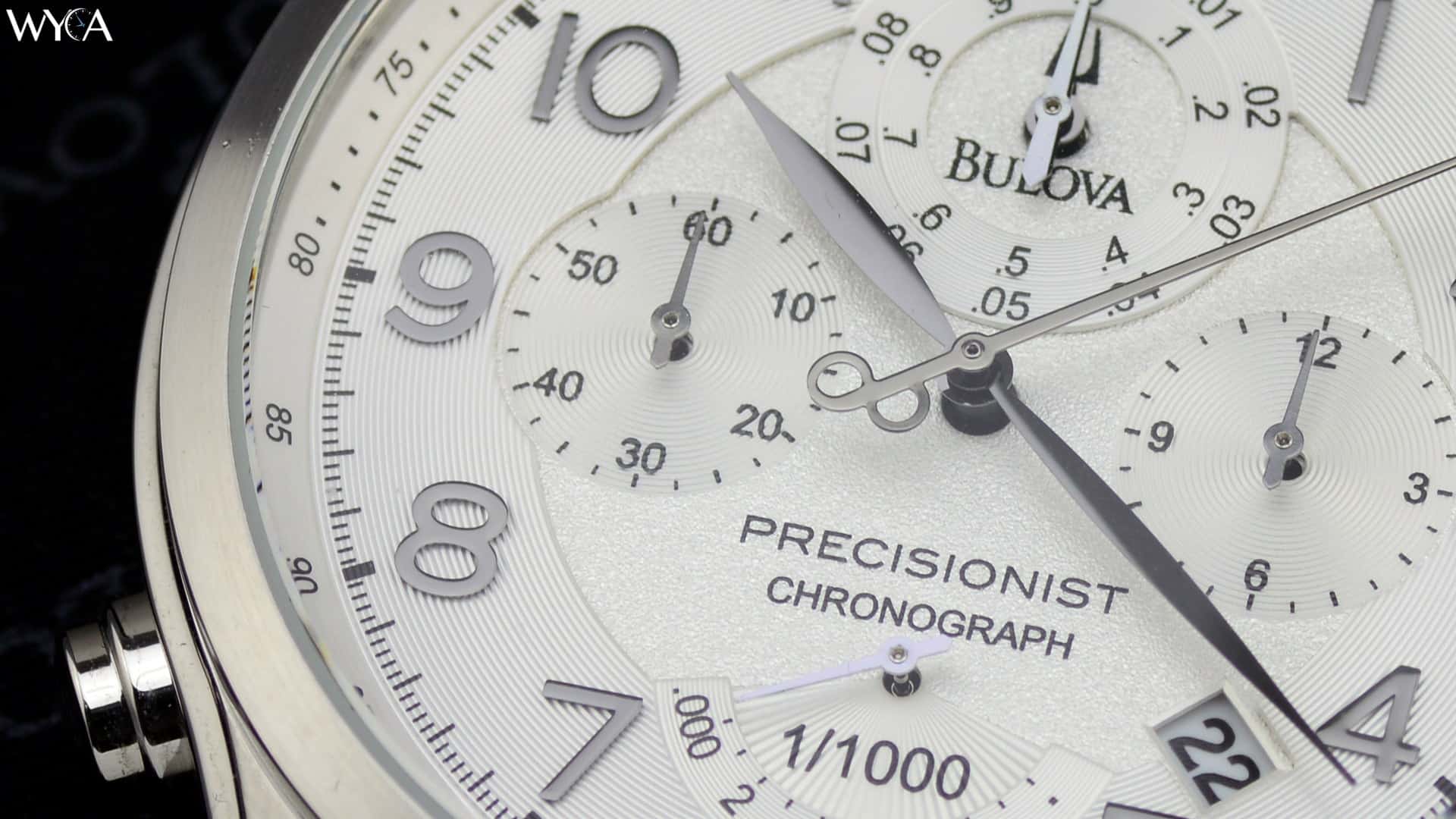 At 45mm, this Bulova is not exactly discreet. This model (96B183) is finished entirely in monochrome: a white dual-textured dial pairs with carbon-grey hands and hour markers, altogether inside a stainless steel case and bracelet combination. It looks good in a sporty, masculine way. Its significant size rules out anything resembling subtlety, however, though the movement lends some justification for its heft.

The bracelet is 24mm wide and means serious business. Like the 15mm thick case, the bracelet carries itself with confidence and absolutely doesn’t apologize for its weight. I remember that when I reviewed my first Bulova, a 96A101 automatic, I found its bracelet to be on the heftier side. Well, so too is the stainless steel bracelet used here. It’s big, thick, and heavy.

The clasp feels lighter than the rest of the bracelet, but its an illusion: once it’s closed it’s locked down tight.

The Shade-Changing Hands & Markers Are a Nice Touch

Depending on the lighting, the hands and markers on the Wilton’s dial may appear black or a deep carbon grey. In the photos I have here they definitely appear more black than grey, but in reality their colouring is more towards the kind of grey you see from no. 2 pencil lead. When light strikes the markers just right they’ll light up many shades brighter than they typically appear. It’s a great effect.

The overall look is actually quite high end. Subtle reflective surfaces on the dial bring posh and elegance to it, while its build, size, and overall complexity prevent it from falling into dress watch territory. For someone wanting a sport watch, or a watch to wear that has genuine character, the Wilton is a great choice.

The Bulova Wilton Chronograph Offers a Lot to Like

Assuming your wrist can handle its oversized case, this watch is one that I’d recommend if you’re looking for a watch that’s built well and that offers something unique and significant. The movement inside is a genuine engineering masterpiece and something that Bulova is very proud of.

Even if you move away from the superstar movement, you still can’t help but appreciate how well the watch has been done. It’s well put together, both in quality of build and cohesiveness of design; it’s made to last, though you’re likely going to wind up replacing the crystal at some point if you wear the watch daily; and finally, it’s just a really cool watch overall.

I really quite like it, even if I can’t wear it.